Accessibility links
Here's Why The Navy Is Holding A Terror Suspect At Sea : Parallels President Obama doesn't want to send suspects to Guatanamo Bay for military trials. But U.S. intelligence agencies do want to interrogate Abu Anas al-Libi before he's handed over to a civilian court in the U.S.

Here's Why The Navy Is Holding A Terror Suspect At Sea

Here's Why The Navy Is Holding A Terror Suspect At Sea 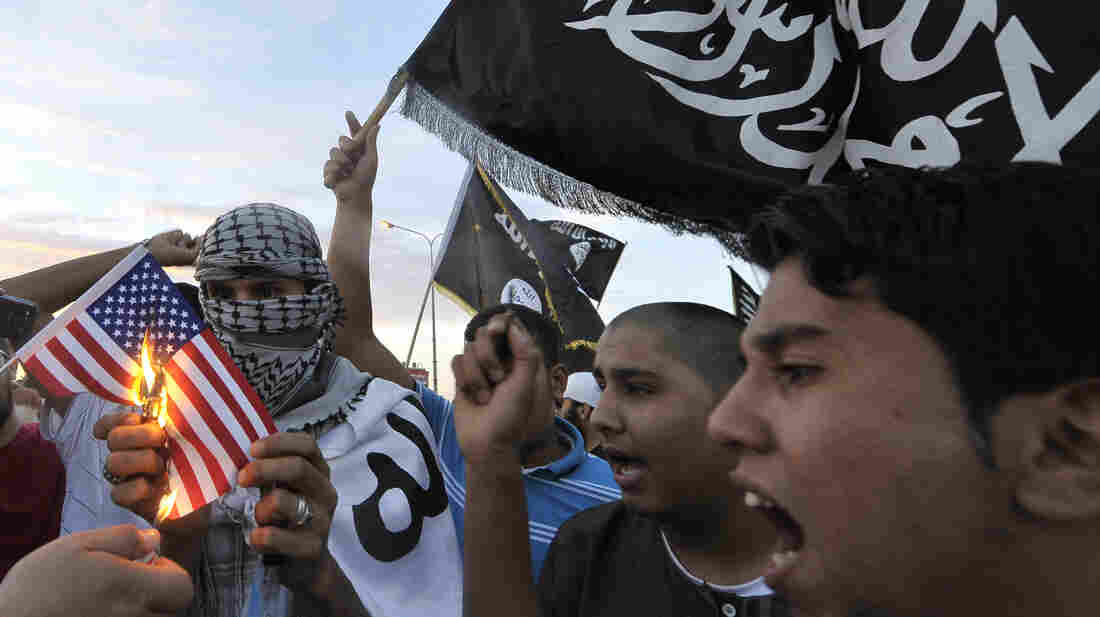 Libyan protesters burn a replica of the U.S. flag on Monday during a demonstration against the capture of Abu Anas al-Libi. U.S. forces seized him Saturday in the Libyan capital Tripoli. He is accused of involvement in two U.S. embassy bombings in Africa in 1998 and is being held on a U.S. Navy ship in the Mediterranean Sea. Esam OmranAl-Fetori/Reuters/Landov hide caption 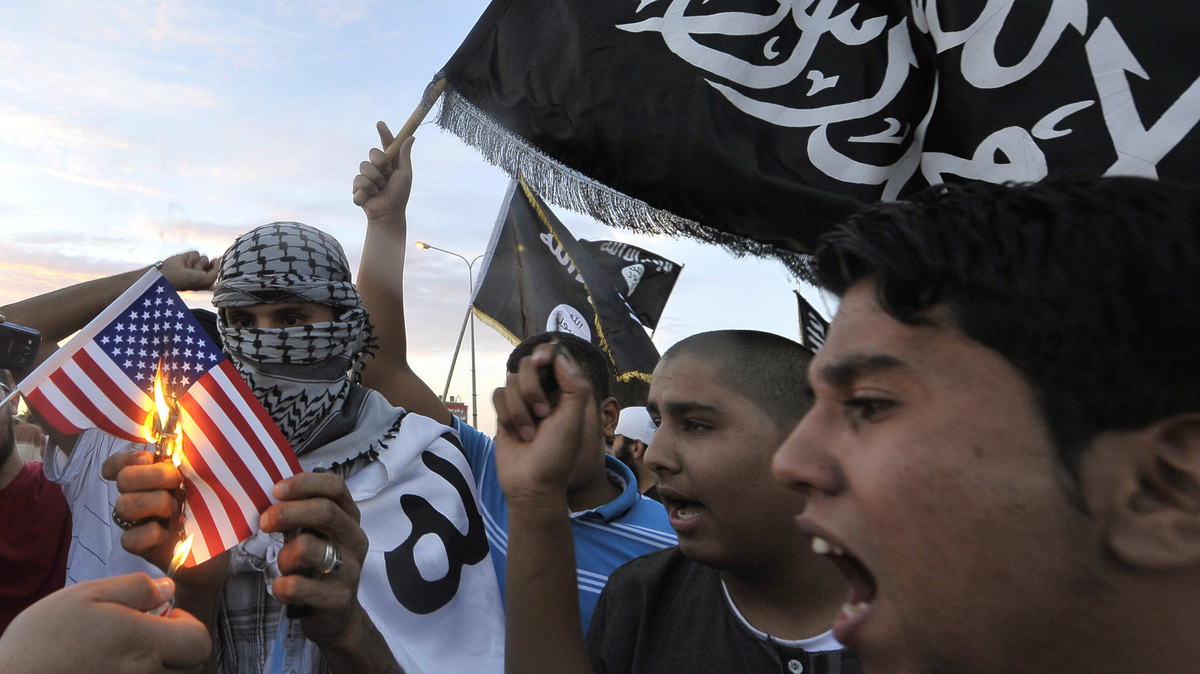 Libyan protesters burn a replica of the U.S. flag on Monday during a demonstration against the capture of Abu Anas al-Libi. U.S. forces seized him Saturday in the Libyan capital Tripoli. He is accused of involvement in two U.S. embassy bombings in Africa in 1998 and is being held on a U.S. Navy ship in the Mediterranean Sea.

After seizing terror suspect Abu Anas al-Libi in the Libyan capital, Tripoli, U.S. forces took him to a ship in the Mediterranean where he could be interrogated for weeks or even months to come.

In short, this allows the U.S. to hold and question al-Libi about his alleged role in a pair of 1998 U.S. Embassy bombings in Africa without putting him in the U.S. civilian court system, which could limit or halt efforts to interrogate him.

These "interrogations at sea" are part of the ongoing legal battles over how the U.S. should deal with terror suspects in the post-9/11 world.

The U.S. intelligence community sees al-Libi as an extremely important figure who's been part of al-Qaida for two decades and has extensive knowledge of the group.

In addition to his alleged involvement in the embassy bombings in Kenya and Tanzania, al-Libi, 49, has been described as the man who handled al-Qaida's computer systems. He was on the FBI's Most Wanted list and had a $5 million bounty on his head.

The U.S. could send al-Libi to the Guantanamo Bay prison in Cuba, where he could be questioned and held indefinitely while awaiting a military trial.

But President Obama wants to close the Guantanamo prison and therefore is unlikely to add to its population. The president has also barred the use of "extraordinary rendition," or sending suspects to secret prisons in third countries.

Abu Anas al-Libi was captured by U.S. forces in Tripoli, Libya, on Saturday. He's described as a long-time member of al-Qaida and is wanted in the 1998 U.S. Embassy bombings in Kenya and Tanzania. FBI hide caption

"Al-Libi ought to be brought to Guantanamo as an illegal enemy combatant and tried by military commission," The Wall Street Journal said in an editorial. "But it apparently offends the Obama Administration's political sensibilities less to keep captured killers on board a ship for weeks instead."

The Defense Department says that al-Libi was "lawfully detained under the law of war in a secure location outside of Libya," while multiple news organizations say he's being held on a U.S. Navy ship in the Mediterranean.

A Previous Detention At Sea

One precedent for this case was the April 2011 seizure of Ahmed Abdulkadir Warsame.

He's a Somali linked to al-Shabab and al-Qaida, who was captured by U.S. forces in the Gulf of Aden and kept aboard a U.S. Navy vessel for about two months before he was ultimately sent to New York City for prosecution. Warsame pleaded guilty to terrorism charges in December 2011 and has been cooperating with the government, according to U.S. officials.

Human rights groups say the shipboard detention is just another version of Guantanamo and the secret prisons that delay or prevent fair trials from taking place. But the intelligence agencies argue that they need to question suspects to break up terror networks and guard against future attacks.

There's no time limit for how long the U.S. could hold al-Libi on a ship outside the U.S.

However, Robert Chesney, an expert on national security law at the University of Texas, told NPR that by announcing al-Libi's detention, the U.S. government will come under pressure to bring him before a U.S. judge in the near future.

"If we go more than a few more days I would imagine you will hear from some quarter or another of an attempt to begin some kind of proceeding on his behalf," Chesney said. "Now that doesn't mean that a court is going to immediately get involved ... but it does mean that there will be legal friction to emerge."

Cully Stimson, who manages the National Security Law Program at the Heritage Foundation, said that the length of al-Libi's detention at sea is likely to be a barometer of how much he's talking to interrogators.

"The longer they have him on a ship, the more we know he's talking," said Stimson, who previously worked on detainee affairs at the Pentagon. "If he clams up, he'll probably be presented in a U.S. court pretty quickly."

The Obama administration has made clear its preference for putting suspects on trial in civilian court. However, once al-Libi is brought into the U.S. legal system, he will, among other things, be read his Miranda rights and receive an attorney who might discourage al-Libi from talking.

Al-Libi was captured Saturday in one of two raids carried out by U.S. forces in Africa. The other, on the coast of Somalia, resulted in a firefight and casualties, but no suspects were captured, U.S. officials said.

Such raids expose U.S. forces to much greater risks compared to drone strikes that have been widely used during Obama's presidency. Capturing a suspect offers the possibility of valuable intelligence, however.