Accessibility links
How India Has Learned To Deal With Major Cyclones : Parallels Fewer than 30 people were killed when Cyclone Phailin struck India's eastern Orrisa state over the weekend. Ten thousand people were killed when a similar storm hit the state in 1999. The difference can be attributed to not only improved infrastructure and communications, but also lessons learned after the last storm.

How India Has Learned To Deal With Major Cyclones

How India Has Learned To Deal With Major Cyclones 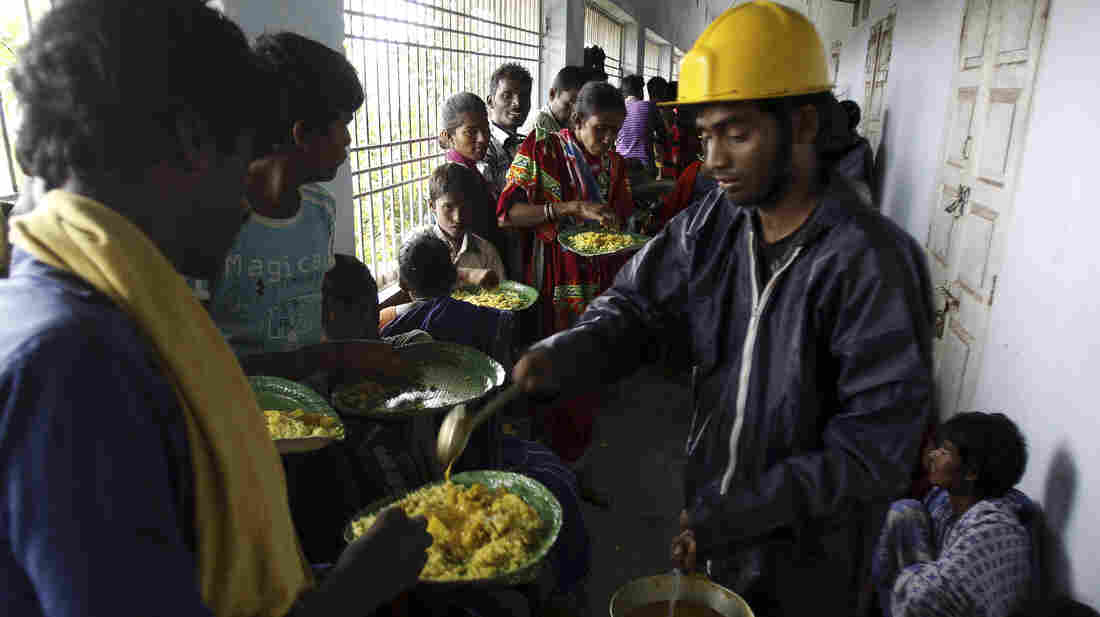 Villagers eat at a temporary cyclone shelter in Chatrapur, India, on Saturday. India evacuated nearly 1 million people before Cyclone Phailin made landfall. The effort appears to have paid off. As of Tuesday, there were fewer than 30 deaths. Biswaranjan Rout/AP hide caption 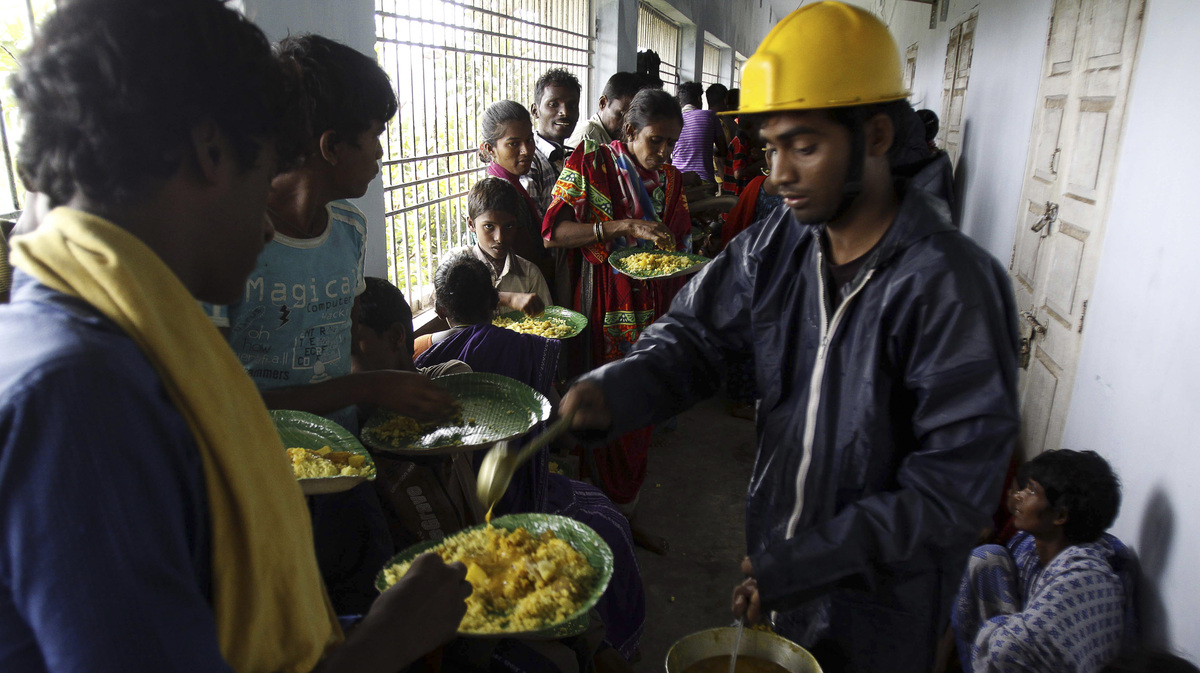 Villagers eat at a temporary cyclone shelter in Chatrapur, India, on Saturday. India evacuated nearly 1 million people before Cyclone Phailin made landfall. The effort appears to have paid off. As of Tuesday, there were fewer than 30 deaths.

The massive cyclone that hit the eastern Indian state of Orissa over the weekend destroyed tens of thousands of homes, but killed fewer than 30 people.

What was different this time? Though it's not a perfect apple-to-apples comparison, there are a number of key differences in the way India prepared and responded to the latest cyclone.

Technology, for one. Here's Reuters:

"Technological advances since 1999 mean that forecasters can accurately predict weather patterns seven days in advance. The advent of mobile phones has also made a huge difference. ... At the time of the 1999 cyclone, there were less than 2 million mobile phone users in the whole of India: today, about 25 million people in [Orissa] alone — 60 percent of the state's population — carry a phone."

And, as The New York Times reports, "Even many of the poorest villages now have televisions, and India's numerous 24-hour news channels have blanketed the nation's airwaves with coverage of the storm."

India's bureaucracy, not typically known for its efficiency, got its act together ahead of Cyclone Phailin.

Officials traveled through coastal regions of Orissa and neighboring Andhra Pradesh state, warning residents to take refuge in government shelters. After the storm, they distributed food to those displaced and tarps for makeshift shelters.

As one civil servant told Reuters: "That's the first thing I asked, that I be completely authorized to take decisions at my own level." That official, in turn, allowed those under him to act without authorization.

Third, the state learned lessons from the disaster in 1999. This time, nearly 1 million people were evacuated — some of them forcibly — from their homes.

In 1999, Orissa had only about 20 cyclone shelters. This time around, the state provided evacuees with shelter.

Again, Reuters: "Both [Orissa] and Andhra Pradesh now have disaster management departments, both have built hundreds of cyclone shelters along the coast, and drills are conducted regularly so people know what to do when an alert is issued."

The Times reported that India's response to Phailin demonstrated how the country had changed.

"Change can come slowly to India. The caste system still predominates, grinding poverty remains endemic and clean water is rare. But the effective response to the threat this weekend demonstrates that Indians are transforming their country, particularly in the ways that they communicate and get their news."

But it's important to point out that such successes are still not that common.

As recently as June, flooding in the northern state of Uttarakhand killed more than 6,000 people.

And even in states like Orissa and Andhra Pradesh, there are inefficiencies. The Wall Street Journal reported that many measures of a $240 million National Cyclone Risk Mitigation Project, put in place after the 2004 Indian Ocean tsunami, have yet to be implemented.

And, the newspaper warned, while the toll from Cyclone Phailin has been low, it "could climb if the millions stranded without enough food and clean water are not taken care of."