Accessibility links
The 1973 Arab Oil Embargo: The Old Rules No Longer Apply : Parallels The embargo led to long gas lines and shaped U.S. foreign policy to this day. However, the world energy market has changed dramatically over the past four decades, and the U.S. now gets less than 10 percent of its oil from the Middle East. 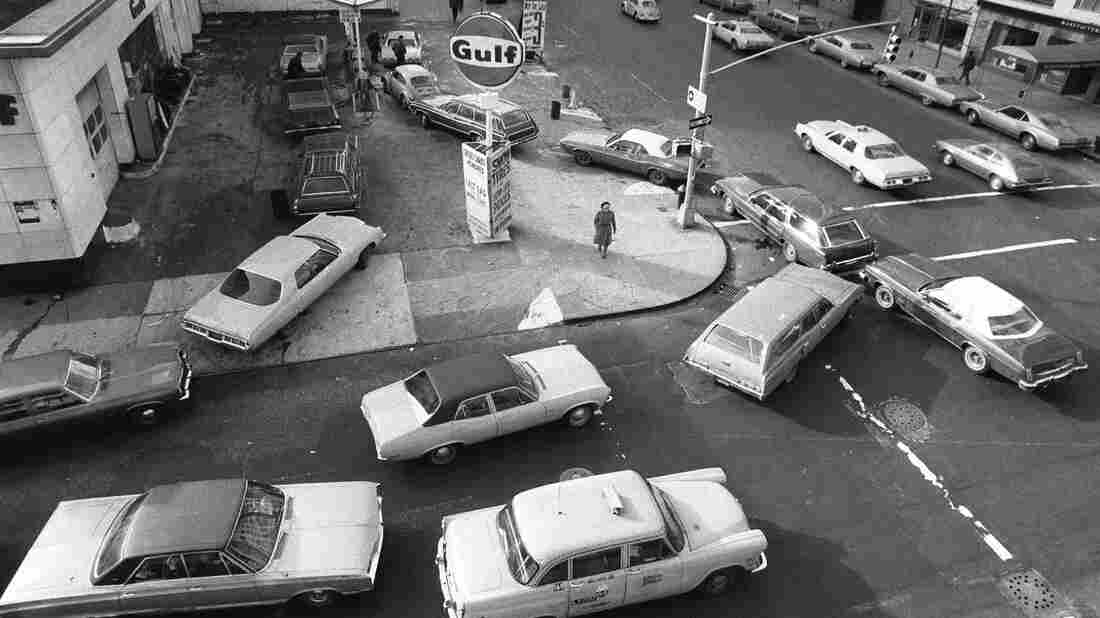 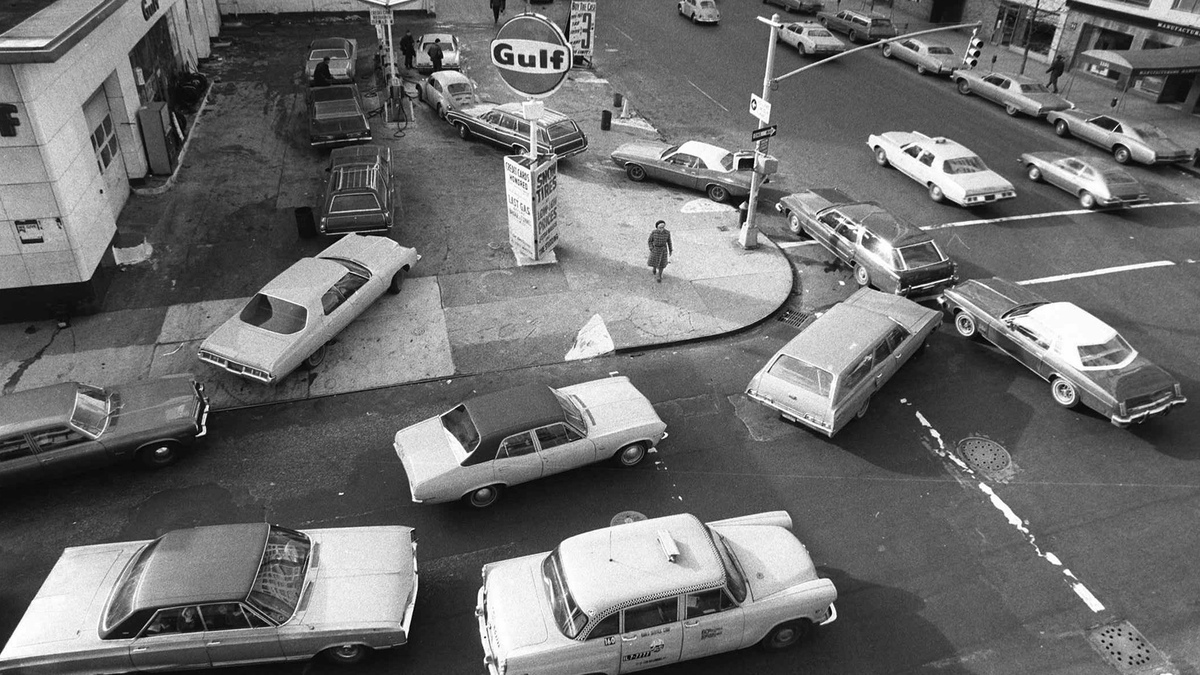 Forty years ago this week, the U.S. was hit by an oil shock that reverberates until this day.

Arab oil producers cut off exports to the U.S. to protest American military support for Israel in its 1973 war with Egypt and Syria. This brought soaring gas prices and long lines at filling stations, and it contributed to a major economic downturn in the U.S.

The embargo made the U.S. feel heavily dependent on Middle Eastern oil, which in turn led the U.S. to focus on instability in that region, which has since included multiple wars and other U.S. military interventions.

"The oil crisis set off an upheaval in global politics and the world economy. It also challenged America's position in the world, polarized its politics at home and shook the country's confidence," author and oil analyst Daniel Yergin wrote in an op-ed in The Wall Street Journal.

While these concerns linger, the world energy market has changed dramatically over the past four decades. U.S. energy production is rising. Less than 10 percent of U.S. oil comes from the Middle East. Global prices are relatively stable.

All this has spurred debate about whether the U.S. is too focused on the Middle East and its oil when it does not appear to pose much of an economic threat to America. We won't try to answer that question today, but we did want to point out things that were very different back in the fall of 1973: 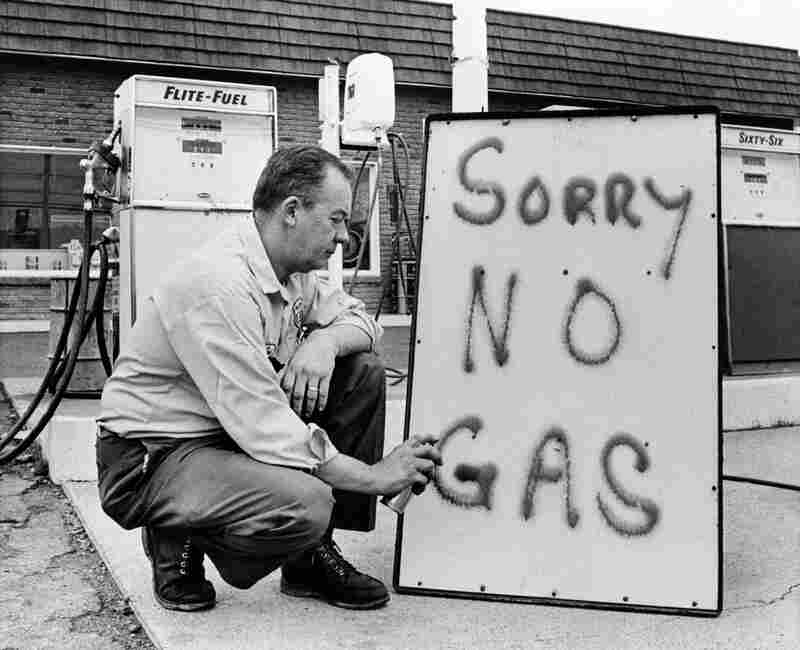 Leon Mill spray-paints a sign outside his Phillips 66 station in Perkasie, Pa., in 1973 to let his customers know he's out of gas. An oil crisis was the culprit, squeezing U.S. businesses and consumers who were forced to line up for hours at gas stations. AP hide caption 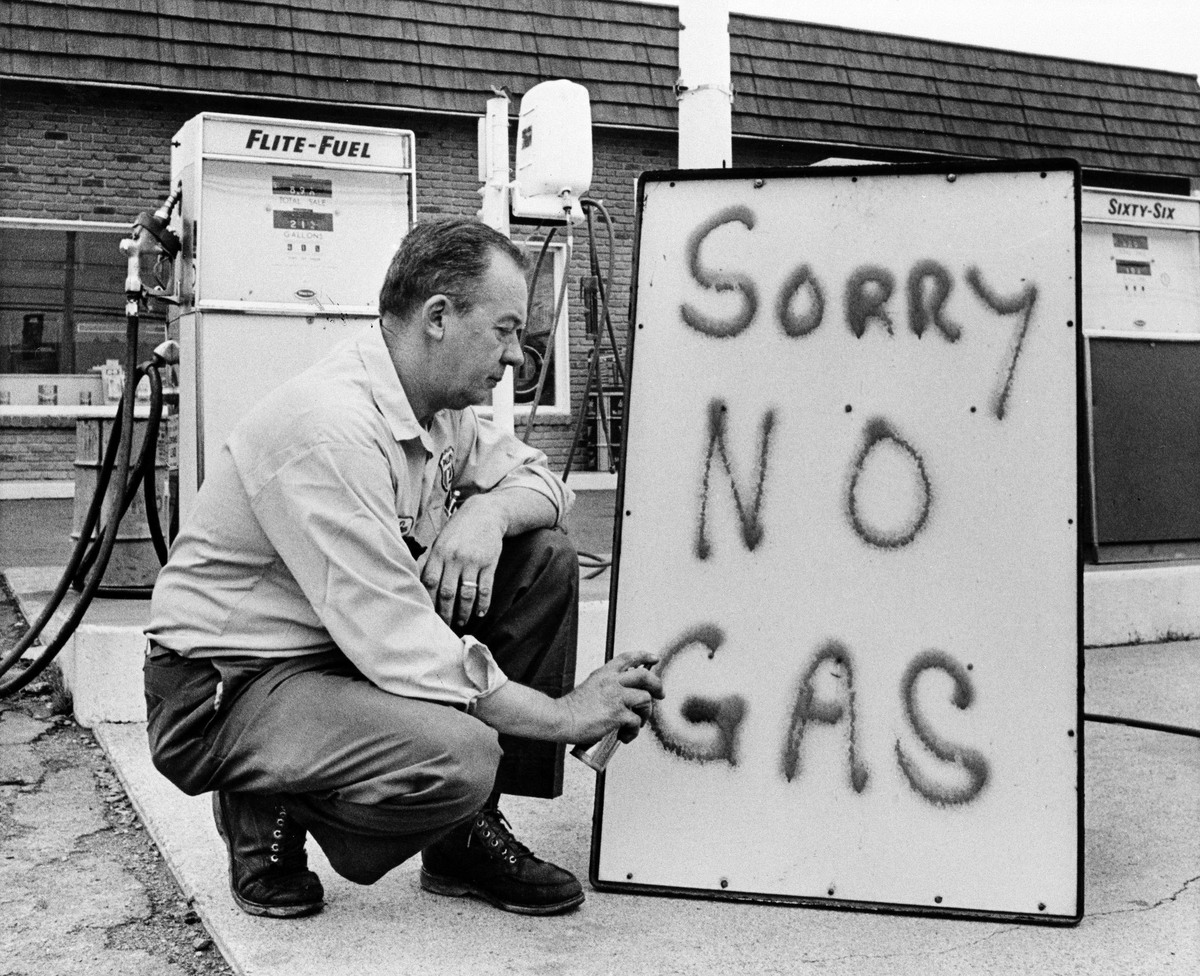 Leon Mill spray-paints a sign outside his Phillips 66 station in Perkasie, Pa., in 1973 to let his customers know he's out of gas. An oil crisis was the culprit, squeezing U.S. businesses and consumers who were forced to line up for hours at gas stations.

Saudi Arabia was a leading proponent of the 1973 embargo. For many Americans, Saudi Arabia was the symbol of the wealthy Arab monarchies that were inflicting so much pain on the U.S. Yet today, Saudi Arabia is one of the closest U.S. allies in the region and is currently pumping oil at high levels to keep world markets stable and offset lower production in places like Iraq, Iran and Nigeria.

Iran and the U.S. were allies. Under the shah, Mohammad Reza Pahlavi, Iran kept on producing and exporting throughout the six-month embargo that lasted until March 1974. After the shah was overthrown in 1979, the U.S. and Iran became sworn rivals, a confrontation that has lasted more than three decades. Iran is now the target of Western sanctions that took effect last year and have cut the Islamic Republic's oil exports by half, from 2.5 million barrels a day to around 1.2 million.

In response to the oil shock, Congress passed fuel economy standards. That 1975 measure required automakers to raise mileage from 13.5 miles per gallon to 27 mpg. Last year, the standards were again doubled, and vehicles must average 54 mpg by 2025. As a result, Americans are driving more without increasing the amount of gas they are using.

Soaring oil prices remade the global energy industry. As oil prices skyrocketed in the 1970s, producers were willing to travel to more remote and difficult places to drill, including Alaska, the North Sea, the Gulf of Mexico and the Canadian oil sands. World oil production today is 50 percent higher than it was in 1973. Also, the crisis prompted efforts to find and develop other power sources, from natural gas to wind to solar.

The U.S. is less dependent on the Middle East today. In the years that followed the 1973 embargo, a cutoff of Middle Eastern oil was regarded as a grave national threat.

Here's President Jimmy Carter in his 1980 State of the Union address:

"An attempt by any outside force to gain control of the Persian Gulf region will be regarded as an assault on the vital interests of the United States of America. Such an assault will be repelled by any means necessary, including military force."

In reality, Middle Eastern oil has never been a huge part of the overall U.S. supply. Imports from the Middle East never accounted for more than 15 percent of the U.S. oil supply and now they account for only about 9 percent.

The U.S. now imports more oil from Canada than anywhere else. Saudi Arabia is the only Middle Eastern nation among the top five nations sending oil to America.

By limiting supply, OPEC was able to cause oil price spikes in the 1970s and '80s. But it has much less power today, and a number of top producers, such as Saudi Arabia, work to stabilize prices rather than disrupt the market.

"For the last four decades, Washington's energy policy has been based on the faulty conclusion that the country could solve all its energy woes by reducing its reliance on Middle Eastern oil," Gal Luft and Anne Korin write in Foreign Affairs.

"The crux of the United States' energy vulnerability was its inability to keep the price of oil under control, given the Arab oil kingdoms' stranglehold on the global petroleum supply," the authors write.

So the oil industry is a very different place. But not everything has changed:

The Israelis and the Arabs are still feuding. The 1973 Middle East war was essentially a draw, and Israel and Egypt then made peace before the decade was over. Israel also has a peace treaty with Jordan, but it is still at odds with its other immediate neighbors, the Palestinians, Lebanon and Syria. And Israel considers its biggest threat to be Iran, arguing that Tehran is trying to develop nuclear weapons, which Iran denies.