Accessibility links
Grandma Exodus: German Seniors Look To Poland For Care : Parallels A recent U.N. study rated Germany high in quality of life for seniors. Even so many Germans spend their final days in Eastern European countries like Poland where elder care is less expensive. The practice has some asking whether it's wrong to send loved ones far away to save money. 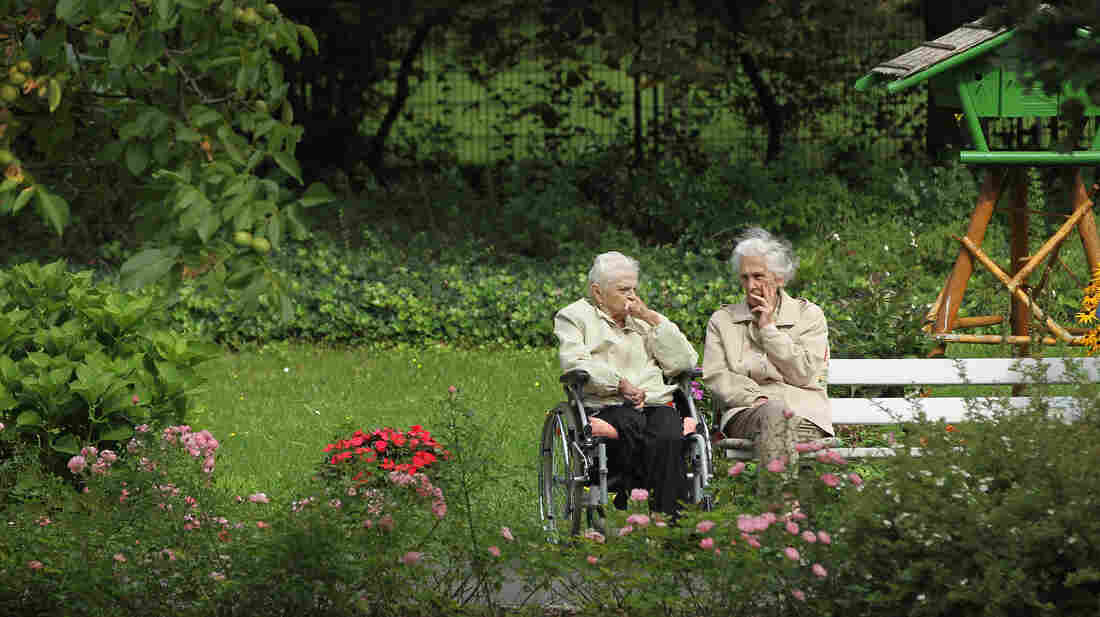 Two German women chat in the gardens of a senior care home in Berlin. Germany is grappling with a rapidly aging population: By 2050, almost a third of Germans will be 65 years or older, and a growing "Grandma export" trend has set hands wringing. Sean Gallup/Getty Images hide caption 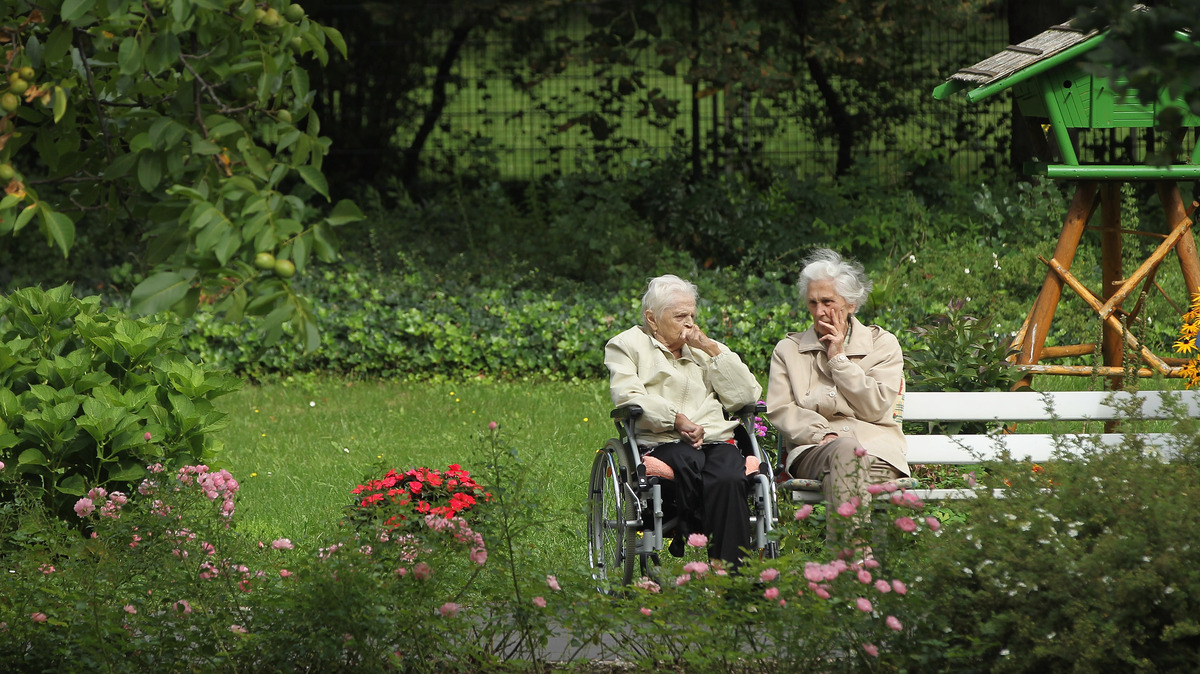 Two German women chat in the gardens of a senior care home in Berlin. Germany is grappling with a rapidly aging population: By 2050, almost a third of Germans will be 65 years or older, and a growing "Grandma export" trend has set hands wringing.

A handful of German and Polish residents at a nursing home in the Polish mountain town of Szklarska Poreba play a Scrabble-like game using blocks with large letters.

The seniors are tended to by Polish workers who offer a steady supply of smiles, hugs and encouragement.

He says he had become too frail live on his own, but his German stepdaughter didn't have enough room to take him in. So Tegls moved 500 miles from Moenchengladbach across the border to Sun House, where he pays a third of what he would spend in Germany. 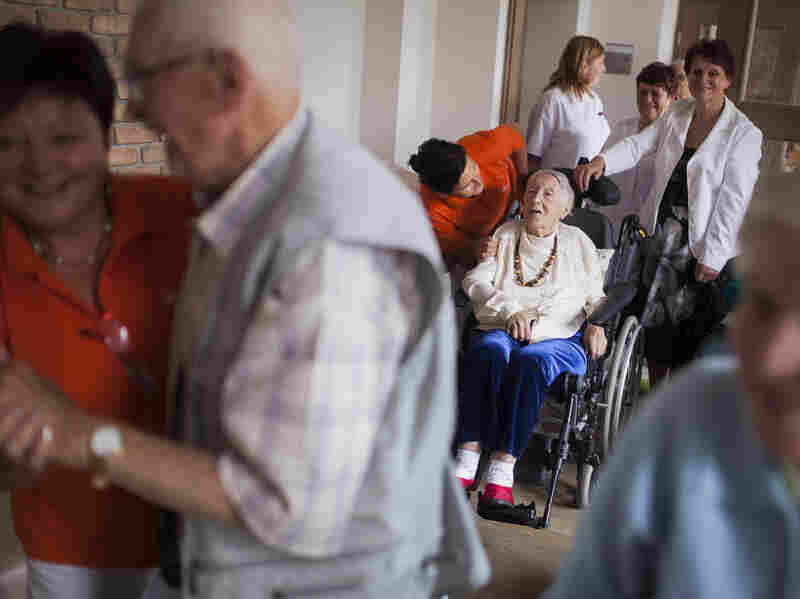 Sonja Miskulin (center), a former translator who suffers from dementia, celebrates her birthday at a nursing home in Szklarska Poreba, Poland, in August. Bartek Sadowski/Bloomberg via Getty Images hide caption 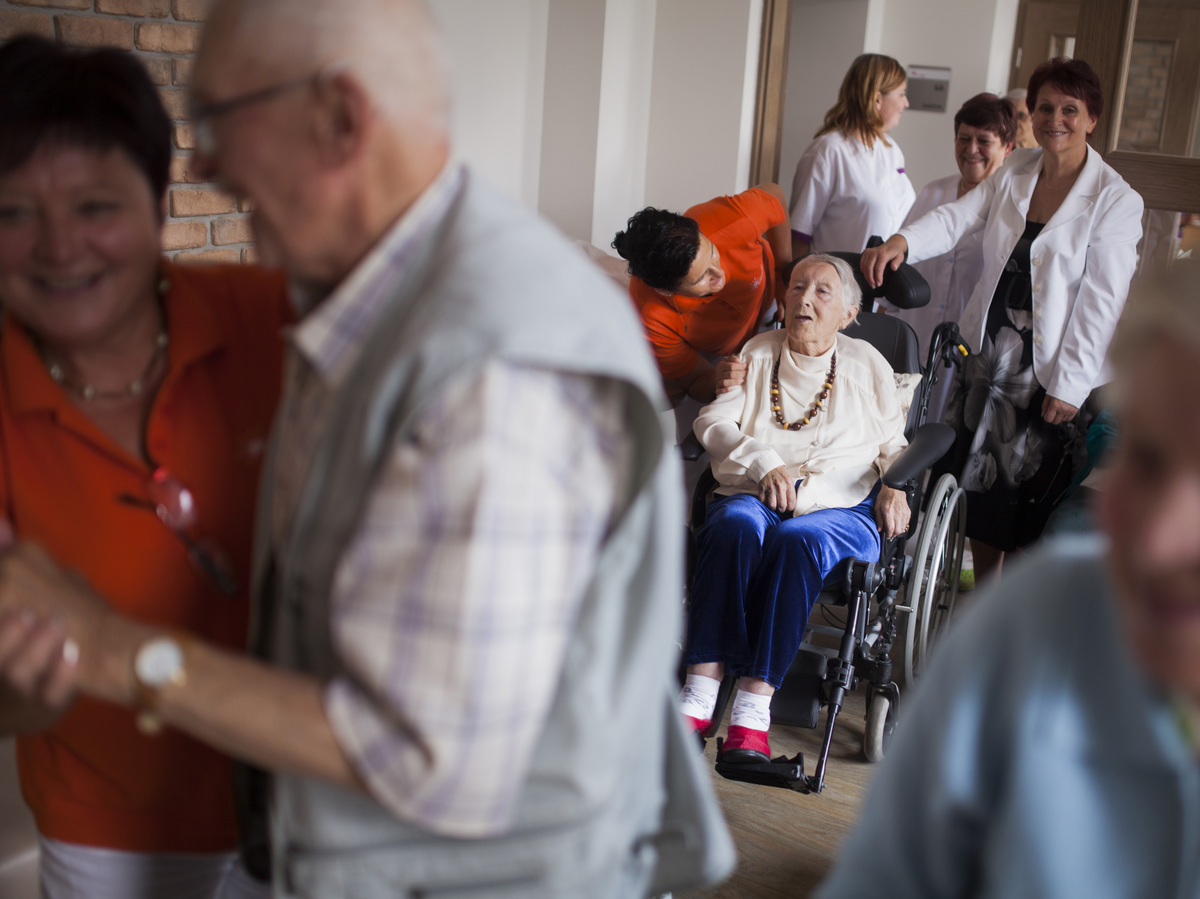 Sonja Miskulin (center), a former translator who suffers from dementia, celebrates her birthday at a nursing home in Szklarska Poreba, Poland, in August.

He says he's disappointed more of the staff here doesn't speak German. But he loves his private room with windows overlooking the vibrant fall foliage, even if it is too far away for his family and friends to visit.

Tegls is one of 10 German seniors at Sun House, a number that is expected to double in the coming months.

Guenther Stobrawe helps Germans find elder care in Poland. He and his Polish-born wife have advised more than 100 families since opening their business in April.

Stobrawe takes a call from a German senior interested in moving to Sun House. He tells NPR it's not just the lower costs, but better care that draws Germans to Poland.

"Most are seeking an alternative to expensive and impersonal treatment in Germany," he says. "There are not enough nurses to provide adequate care to the elderly."

That shortage is expected to increase as Germany's population ages. By 2050, almost a third of Germans will be 65 years or older.

And the issue has implications beyond Germany. The U.N. estimates that by 2050, the world's population that is over 60 will increase to 2 billion. Meanwhile, the cost of caring for the elderly is rising, leading to questions about who's responsible for elder care.

Our treatment isn't different than what is offered in Germany. But what German relatives of the patients tell us is that it's much more warm-hearted.

Better care is why one German woman NPR interviewed says she pulled her mother out of a nursing home down the street and moved her to a Polish one 350 miles away. The German government cut off the 94-year-old woman's pension for leaving the country. Her daughter, who asked that she and her mother not be identified, says she is planning to tell officials her mother has moved back to Germany to restore the monthly payments.

But she says no matter what, she won't bring her back to a German nursing home. She says at the last one, workers fed her mother a steady dose of sedatives that kept her asleep most of the time. The daughter says that's not the case in Poland, where her mother is happy and more active.

"Our treatment isn't different than what is offered in Germany," says Helena Grab, Sun House's director. "But what German relatives of the patients tell us is that it's much more warm-hearted.

"We treat them in a friendly and hands-on manner," she adds. "We knock on the door before we go into their rooms. This approach appeals to our patients' loved ones."

But many other Germans are uncomfortable with the exodus of their senior citizens.

A March survey by pollster TNS Emnid found that more than 4 of every 5 Germans rejected the notion of their elderly spending their final years in Poland or nearby Slovakia, another country to which seniors are moving.

The influential German newspaper Suedeutsche Zeitung sarcastically called the trend "gerontologic colonialism," and featured a cartoon of older Germans rolling eastward on walkers, in wheelchairs and in hospital beds.

Klaus Pawletko, who heads the Berlin-based association Friends of The Elderly, blames the transplant of German seniors into cheaper facilities abroad on relatives seeking to protect their inheritance.

He says sending older Germans to a foreign country makes them feel cast off.