Accessibility links
Election In Ultra-Orthodox Israeli Town Tests Gender Norms : Parallels "It's a new thing. I hope it will be accepted, but I'm not so sure," one resident says about women running for town council. "Here women who express themselves aren't seen as a good thing." 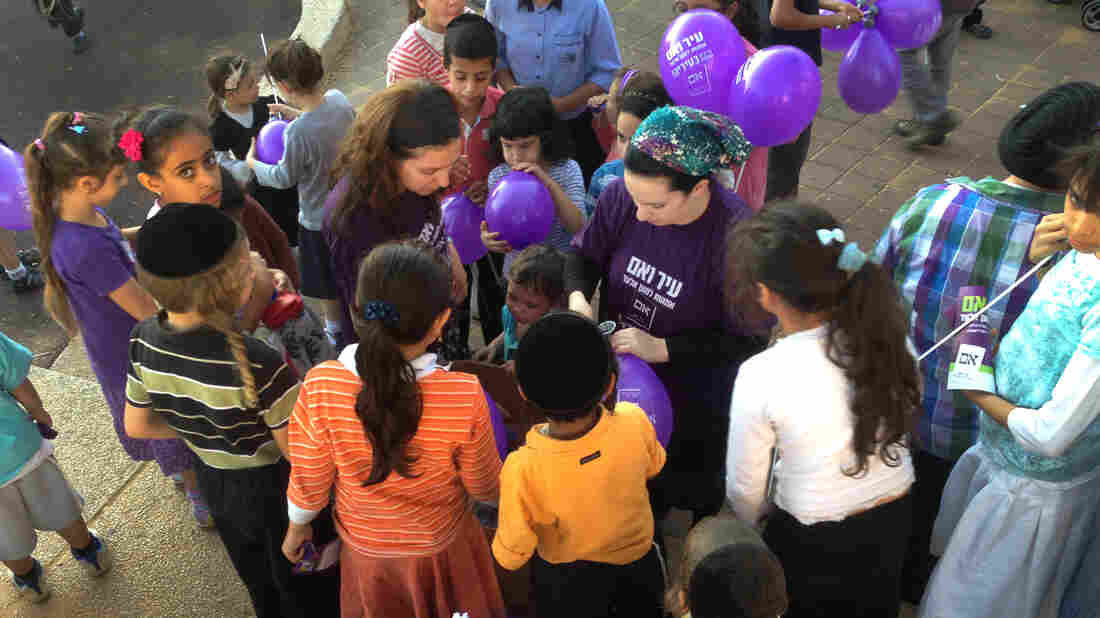 Candidates for town council Michal Chernovitsky (left) and Adina Ruhamkin campaign in a park in El'ad, or Forever God, a small religious community in Israel. They could be the first women on El'ad's council, and the first ultra-Orthodox women to win public office in Israel. Emily Harris/NPR hide caption

Voters across Israel choose new mayors and city councilors in local elections Tuesday. In one small town, a handful of ultra-Orthodox Jewish women are defying the norms of their community by running for office.

On a recent day, children mob two women in skirts, stockings and purple T-shirts in a neighborhood park in El'ad, or Forever God. The women are candidates for town council. As part of their get-the-word-out campaign, they're blowing up balloons for kids.

"I've been thinking about this for a year. I think it's crucial that women be represented on the town council," Michal Chernovitsky, the 33-year-old leader of the five female candidates running. "Because there are just men now, a lot of issues get lost."

Their slogan is "Mothers for El'ad." The town is young, just 13 years old. It was built specifically as a strict religious community, and the town spends extra money on synagogues and other religious institutions. No one is allowed to drive here on the Sabbath, and few residents have TV or the Internet.

All that is fine with Adina Ruhamkin, another candidate; what El'ad needs, she says, are basic services for children and the moms who take care of their daily needs.

"There's no library, nothing here. ... It's like a hotel," Ruhamkin says. "You come to sleep in town and leave the town. That's what's there — nothing."

Among the Mothers' pitches: Build a library and a swimming pool, increase bus service and add more stops. They also want to create jobs, for men and women. One voter at the park, a mother of nine, is hesitantly supportive.

"I've never heard before of women running for council," she says. "It's a new thing. I hope it will be accepted, but I'm not so sure. Here women who express themselves aren't seen as a good thing."

As the candidates hand out balloons, a car from another city council campaign drives by, touting over a loudspeaker the endorsements it's won from various rabbis. There are many ultra-Orthodox elected officials in Israel; none are women.

Racheli Ibenboim might have become one. She was supposed to be on the Jerusalem ballot for city council, but community pressure led her to drop out.

"My children were threatened that they would not be able to stay at their schools," Ibenboim says. "My husband was told he wouldn't be able to attend our synagogue anymore. His employers even got a phone call saying they should let him go."

She got many messages of support, too, but felt her particular ultra-Orthodox sect just wasn't ready for a woman to run for public office.

"When I had to decide whether to stay a part of my sect or take on this political task, I thought it was more important to try to create change from within," she says.

As Israel's ultra-Orthodox population has grown, its strict gender rules have crept into other parts of society. Rachel Azaria is not ultra-Orthodox, but is devout, religiously observant and an elected member of the Jerusalem City Council. She helped lead a fight against public bus lines that made women sit in the back. Azaria says many ultra-Orthodox women secretly called her during the campaign to thank her for her efforts, albeit in hushed tones.

Azaria believes with time, more ultra-Orthodox women will seek to make their voices heard in politics. Back in El'ad, the Mothers team is hopeful it will win at least one town council seat. But the candidates are in unfamiliar territory, says Ruhamkin.

"It's weird. We're not yet in, but weird," she says. "Because we are women and everybody [else] are men, and it's going to be weird.