Accessibility links
Are Afghanistan's Schools Doing As Well As Touted? : Parallels Under the Taliban, 1 million Afghan boys and very few girls went to school. Now, 10 million students are enrolled, 40 percent of them female. But on any given day, a much smaller number actually shows up for class. What's more, there are shortages of classrooms, books and qualified teachers. 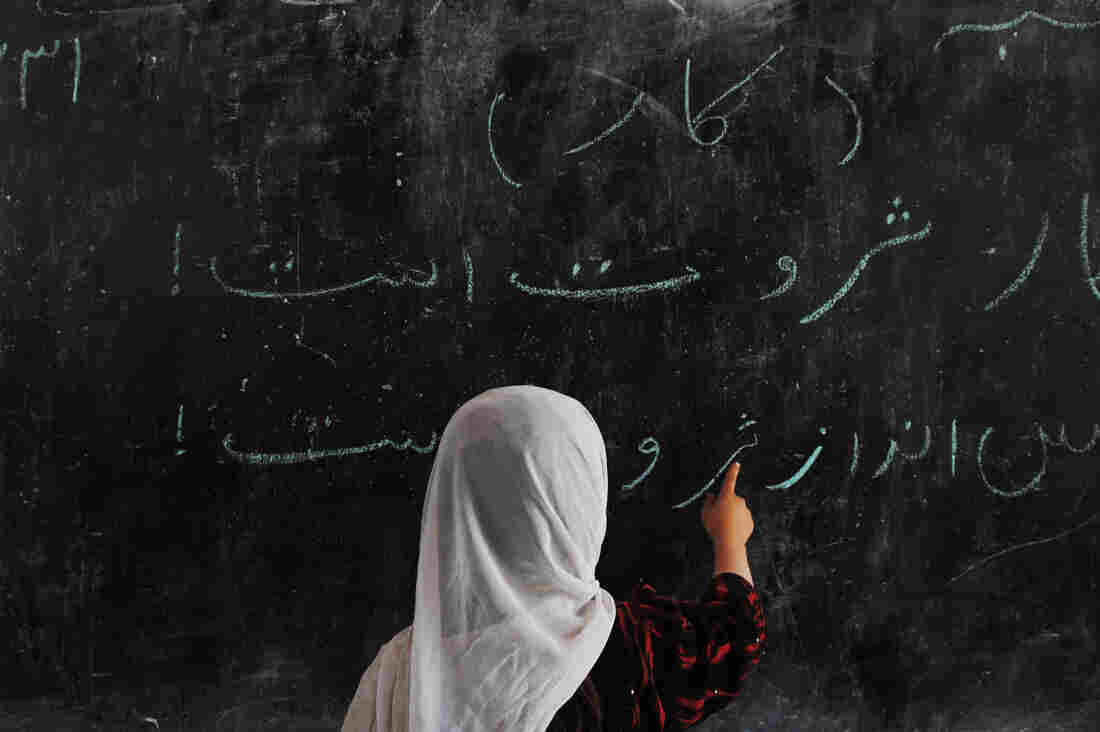 An Afghan child writes on a blackboard at a school built by German troops in a refugee camp on the outskirts of Mazar-e-Sharif. The number of students enrolled in Afghan schools has skyrocketed since the fall of the Taliban at the end of 2001. Farshad Usyan/AFP/Getty Images hide caption 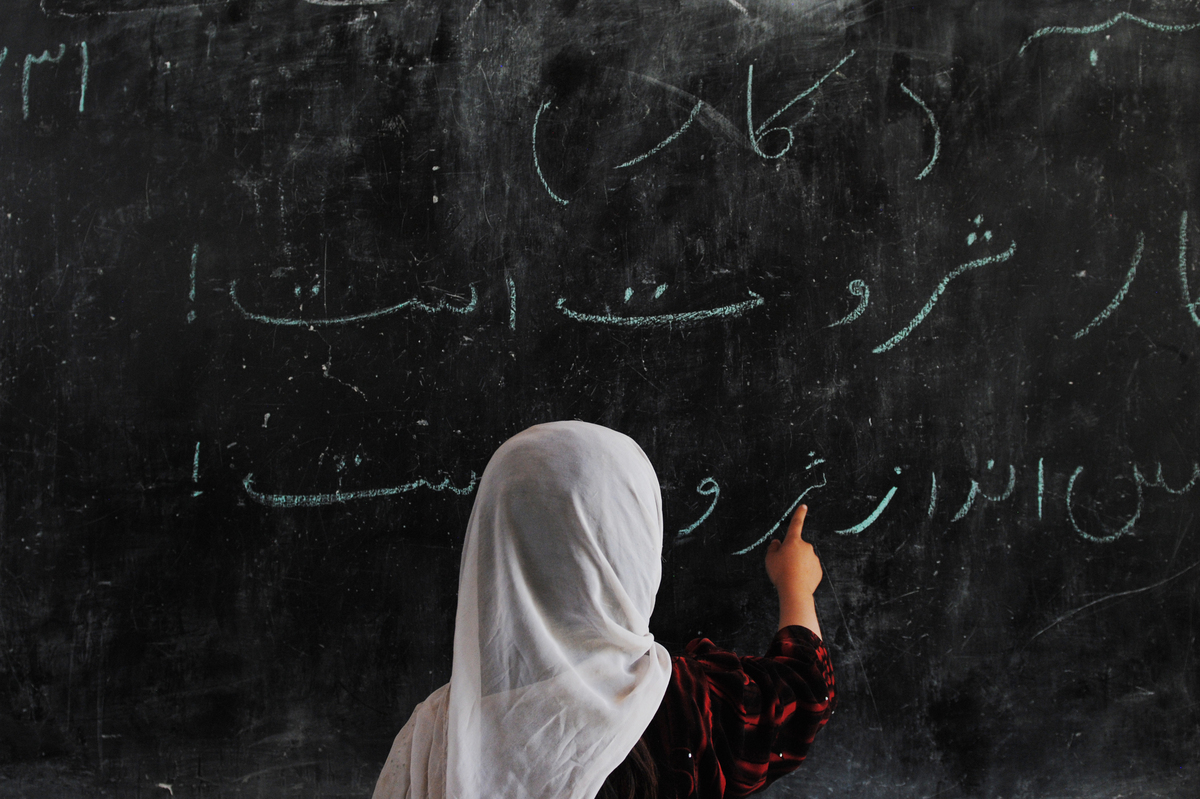 An Afghan child writes on a blackboard at a school built by German troops in a refugee camp on the outskirts of Mazar-e-Sharif. The number of students enrolled in Afghan schools has skyrocketed since the fall of the Taliban at the end of 2001.

It's one of the most touted "positive statistics" about Afghanistan: Today, there are 10 million Afghans enrolled in school, 40 percent of them female.

Under the Taliban, about 1 million boys and almost no girls were attending schools. Western officials routinely point to the revived education system as a sign of success and hope for the future.

The international community has spent billions on the construction of schools and programs ranging from teacher training to community-based education in remote villages to book distribution. The U.S. Agency for International Development alone has spent more than $850 million on education since the fall of the Taliban at the end of 2001.

But the numbers tell only part of the story: While 10 million students might be enrolled in all levels of education, they aren't all attending classes, and there are questions about how many of those attending are actually learning.

Take the Neswan school in Parwan province, north of Kabul, for example. On a recent day, students shuffle to class in a two-story building. The school holds about 400 students at a time, and there are three daily sessions — a total of about 1,200 students are supposed to attend class each day.

But principal Fawzia Hakimi says average attendance is only a little more than 50 percent.

"Some boys can't attend school because they are working," she says. "When we ask them why they are late, some say, 'I was selling water, I was selling plastic bags.' " 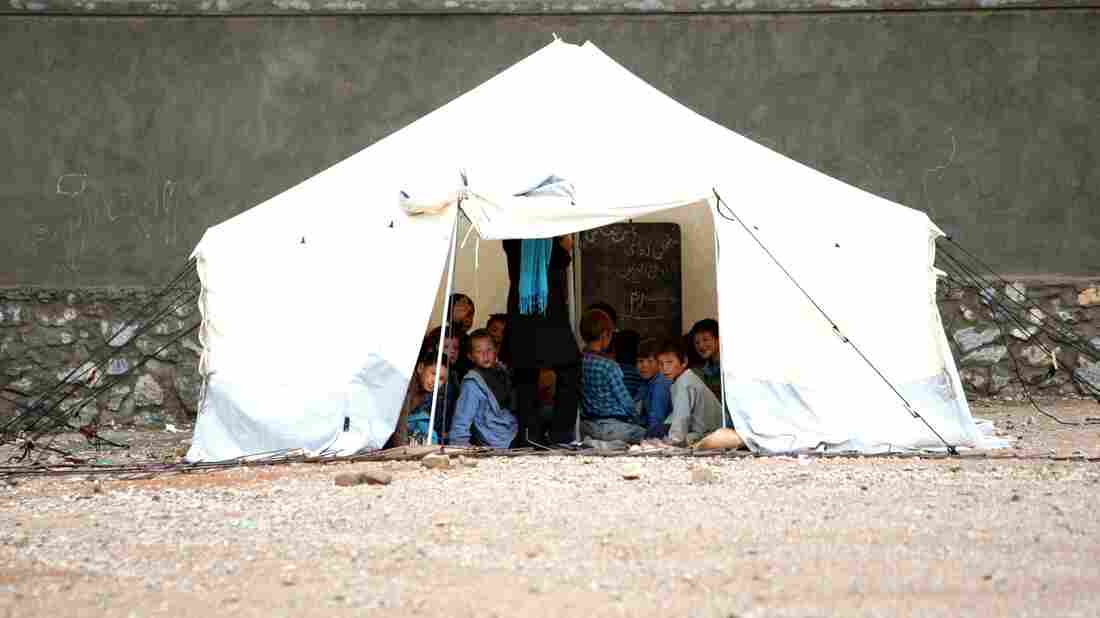 Afghan children attend class in a tent in Bamiyan province, west of Kabul, on June 3. A shortage of buildings is just one of a host of problems the Afghan educational system faces. Ahmad Massoud/Xinhua/Landov hide caption 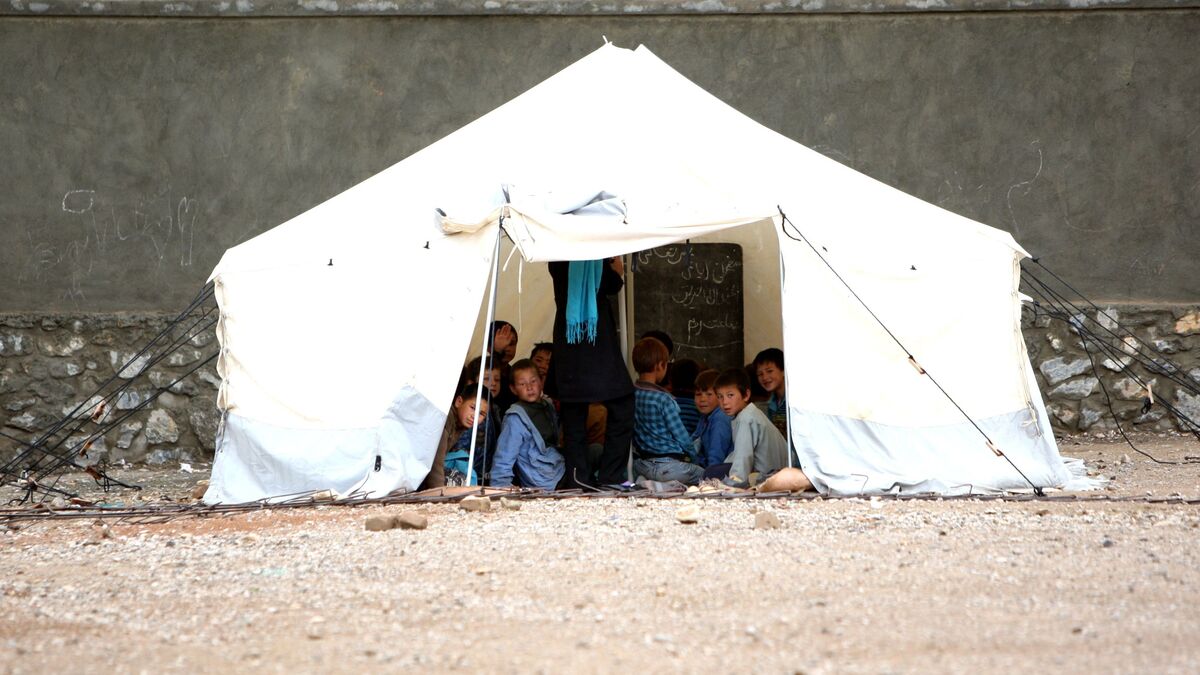 Afghan children attend class in a tent in Bamiyan province, west of Kabul, on June 3. A shortage of buildings is just one of a host of problems the Afghan educational system faces.

As in most of Afghanistan, many of the families in the school district live in poverty. So they make their sons work for at least part of the day. The 48-year-old principal says looking at the attendance log is depressing.

And it's not just the boys who are often late or absent.

"We have a girl in sixth grade who is engaged," says Hakimi. "She is just a little girl. And there are others who are engaged, too."

Many girls in rural areas are forced into marriage once they reach puberty — and disappear from school.

"One of my classmates stopped attending school due to security issues, and another got married when we were in grade nine," says Mojdah, a 12th-grader at the Hora Jalali Girls High School in Parwan.

By ninth grade, classes are segregated, and female teachers must teach the girls. Even though Hora Jalali is a single-sex school, it's so conservative that girls like Mojdah have to wear a double headscarf to ensure not a single strand of hair is visible.

"Family issues, social issues, and also cultural and traditional customs prevent girls attending school in our society," says Mojdah, who like many Afghans goes by only one name.

But it's not just cultural practices that keep girls out of school, says Deputy Minister of Education Asif Nang.

"In more than 166 districts of Afghanistan out of 416, we don't have a single female teacher," he says. In about 200 districts, Nang adds, there is no secondary education for girls.

So even if families want to send their daughters to school, it's not always an option. Nang says there are roughly 5 million Afghan boys and girls attending primary school nationwide. But only about 1 million Afghans make it to grades 11 and 12.

Parwan province is above average in the country. Officials there claim 95 percent of kids have access to school. But access doesn't necessarily translate into a quality education.

Sadeqi High School in Parwan consists of an old building, two newer ones and seven tents. Boys attend classes in the morning, girls in the afternoon.

Sadina Saqeb teaches history in one of those tents. 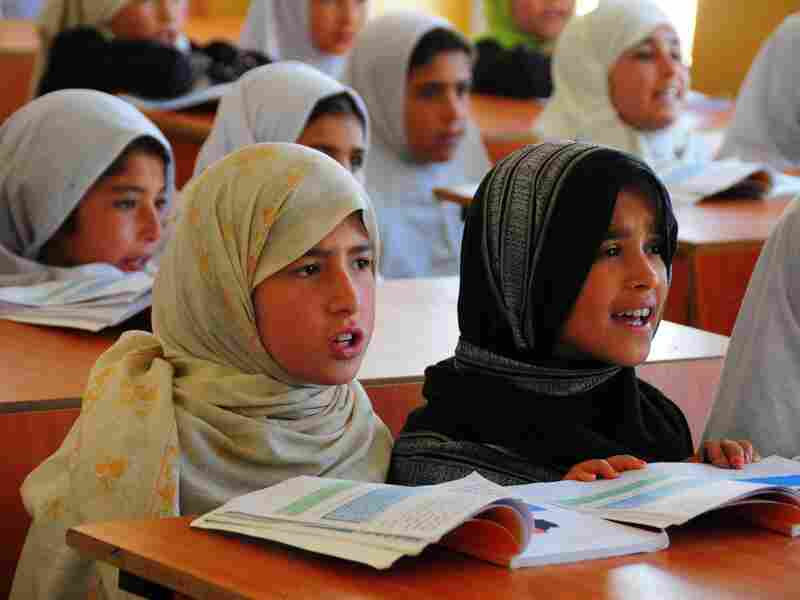 Afghan girls take classes at a refugee school in Afghanistan's Parwan province, on April 3. Under the Taliban, girls were forbidden from receiving an education. Now they account for 40 percent of the country's student enrollment. Zhao Yishen/Xinhua/Landov hide caption 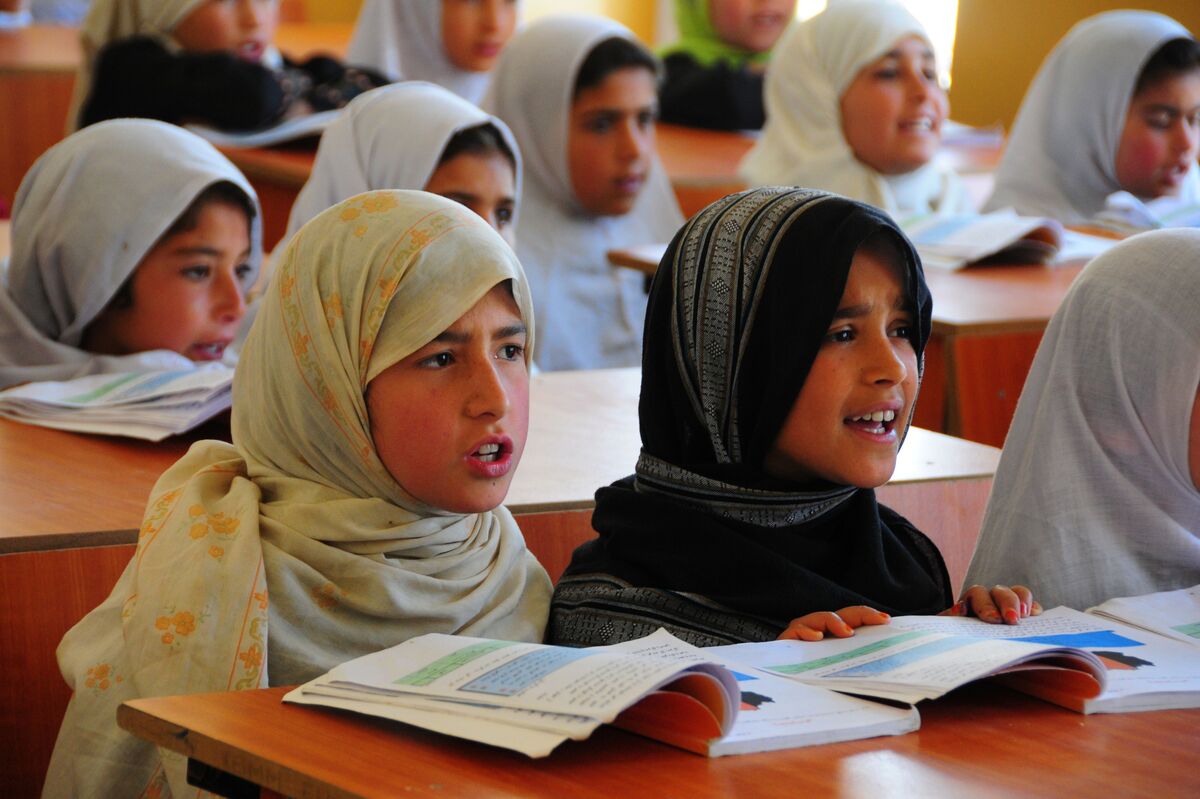 Afghan girls take classes at a refugee school in Afghanistan's Parwan province, on April 3. Under the Taliban, girls were forbidden from receiving an education. Now they account for 40 percent of the country's student enrollment.

"Most of the students have sore throats during the summer because of the dust," she says. "And these tents can't block outside noise, so the students can't study their lessons properly."

Although some 4,000 schools have been built since the fall of the Taliban, some provinces are desperately in need of more. At the same time, there are other provinces where large numbers of schools are closed because of a lack of security or of teachers, or simply because not enough families want to send their children to school.

"We have a shortage of books," she says. "Seventeen of 55 students are present today, and we still don't have enough books."

Officials like Bashir Ahmad Abed, headmaster of the Sadeqi school, says even if a student has a book, there's no guarantee he or she can read it: Many books are too complicated for the students.

That's in large part because most kids aren't getting any kind of early childhood education, says Mindy Visser, the national education adviser for the Aga Khan Foundation in Afghanistan.

"Maybe their parents are illiterate so they haven't been exposed to reading material or even words very often before they enter school," says Visser.

While many students aren't getting much help from their parents, a lot of them aren't being well served by their teachers either, says Nang, the deputy education minister. He says that half the teachers in Afghanistan don't have the minimum required training, which is the equivalent of an associate degree.

"In the rural area[s], we have a huge shortage of professional teachers," he says, adding that many of them have not even finished 12th grade.

The government even had a program trying to encourage teachers to go to more rural schools by paying higher wages, says Visser, the education adviser. But even so, she says, qualified teachers still don't want to go to rural areas because of security concerns or because of the travel time and distance.

Visser gives the Ministry of Education good marks for its efforts to modernize the school curriculum and expand access at the primary level. She says long-term challenges include increasing the number of kids who stay in school beyond the primary level, and addressing the bottleneck in higher education.

About 300,000 people graduate from high school each year; they are competing for 60,000 openings in colleges as well as vocational and teacher training programs.

Even though many schools and teachers — or students, for that matter — are getting failing grades, the principal of the Hora Jalali High school in Parwan says that's not diminishing the appetite for education. She says in one case, a 35-year-old woman returned to school after a 15-year hiatus during the civil war and Taliban rule.