Accessibility links
India's Low-Cost Mission To Mars : Parallels India plans to launch a satellite to Mars in November. The mission is budgeted at less than $80 million — a real bargain when it comes to space exploration. The mission fills many Indians with pride, but there's still a debate on whether this is a good investment for a poor country. 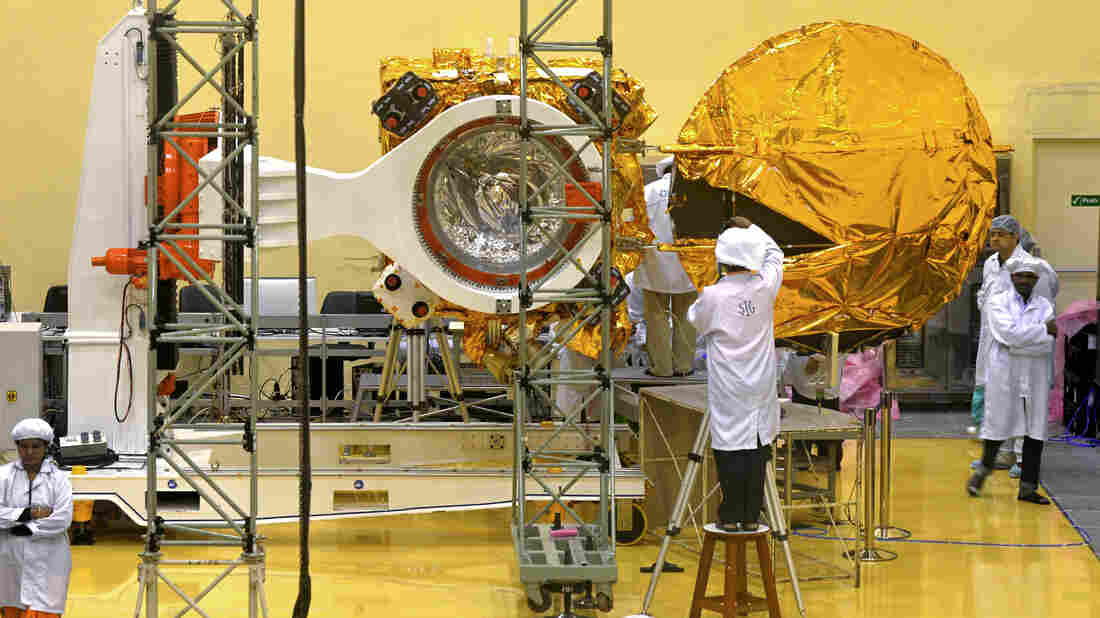 Scientists and engineers work on the Mars Orbiter at the Indian Space Research Organisation's satellite center in Bangalore, India, on Sept. 11. The spacecraft is scheduled to be launched sometime in the next three weeks. Manjunath Kiran/AFP/Getty Images hide caption 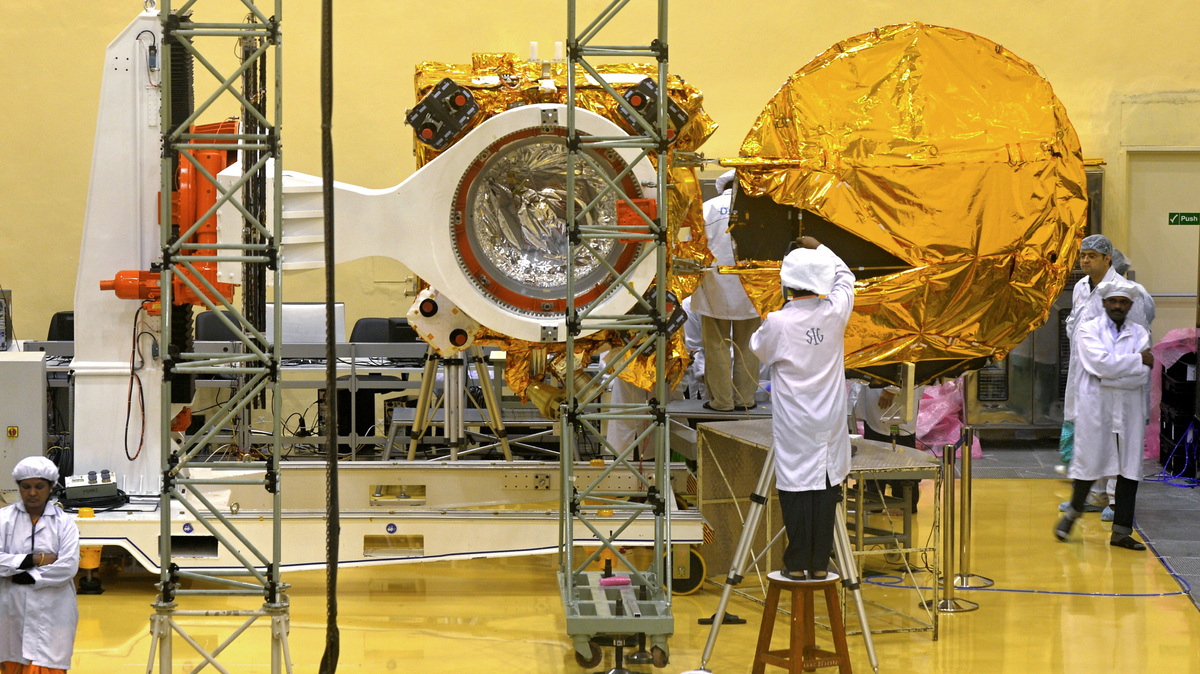 Scientists and engineers work on the Mars Orbiter at the Indian Space Research Organisation's satellite center in Bangalore, India, on Sept. 11. The spacecraft is scheduled to be launched sometime in the next three weeks.

India is expected to launch a satellite to Mars next month at a cost of less than $80 million — a fraction of what it costs other countries.

The satellite, known as Mangalyaan, or Mars Craft, is designed to orbit Mars and study the planet's atmosphere and surface. It will not touch down on the planet.

Despite Glitches, India Shoots For The Moon

So far, only the U.S., Europe and Russia have successfully sent spacecrafts to Mars. It's not a simple undertaking. Mangalyaan is expected to take about 300 days to make the trip.

As K. Radhakrishnan, head of the Indian Space Research Organization, or ISRO, told The Hindu: "For a technologist this is a challenge; for a scientist an opportunity to learn about Mars. ... For the common man or student, it is a matter of pride that our country can do such a complex mission."

Pride notwithstanding, the mission is somewhat controversial, as NPR's Julie McCarthy reported last year. She quoted critics saying India, with its chronic poverty and infrastructure problems, would do well to spend that money at home.

One of the biggest critics is G. Madhavan Nair, the former head of ISRO, who calls it a "national waste."

But defenders say the $80 million price tag is relatively modest and note that many of India's past space missions have focused on ways to overcome the nation's problems.

"The country realized early on that satellites would enable health officials to practice medicine remotely, reaching inaccessible parts of the country. The same was true for remote education. ISRO's major focus, in other words, has been to use space research as a way to overcome the country's (still) steep economic obstacles."

ISRO's Radhakrishnan says the agency's overall budget is 0.34 percent of the total national budget. He says the portion of the agency budget given to planetary exploration is 7 percent. And, he argues, such missions could "percolate to" applications like cyclone forecasting.

Defenders say this mission could reap financial benefits in the long run.

"If they can show the world they have what it takes to send spacecraft to other planets," Andrew Coates, a professor at Mullard Space Sciences Laboratory, tells the BBC, "they can begin to sell launches and space on its launch vehicles to scientific organizations."

Two years ago, China attempted to send its own spacecraft, Yinghou-1, to Mars. But that mission was aborted following technical issues. India then fast-tracked its own mission to the Red Planet.