Accessibility links
Madagascar's Bamboo Lemurs Fight For Survival : Parallels The island's rich biodiversity is increasingly threatened by slash-and-burn agriculture and climate change. A leading example is the greater bamboo lemur, whose numbers have dwindled due to a shrinking supply of the fresh bamboo they depend on. 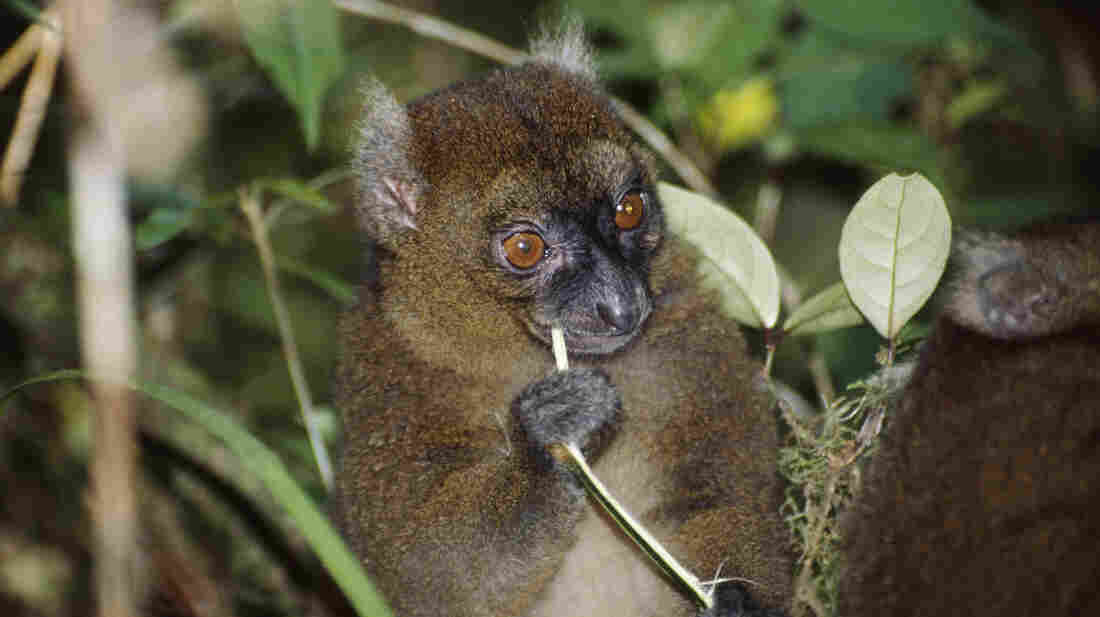 A greater bamboo lemur in Ranomafana National Park, Madagascar, in 2000. Scientists say their numbers have dwindled due to slash-and-burn agriculture and climate change, which have reduced the amount of fresh bamboo available to them. Haroldo Castro/Conservation International/AP hide caption 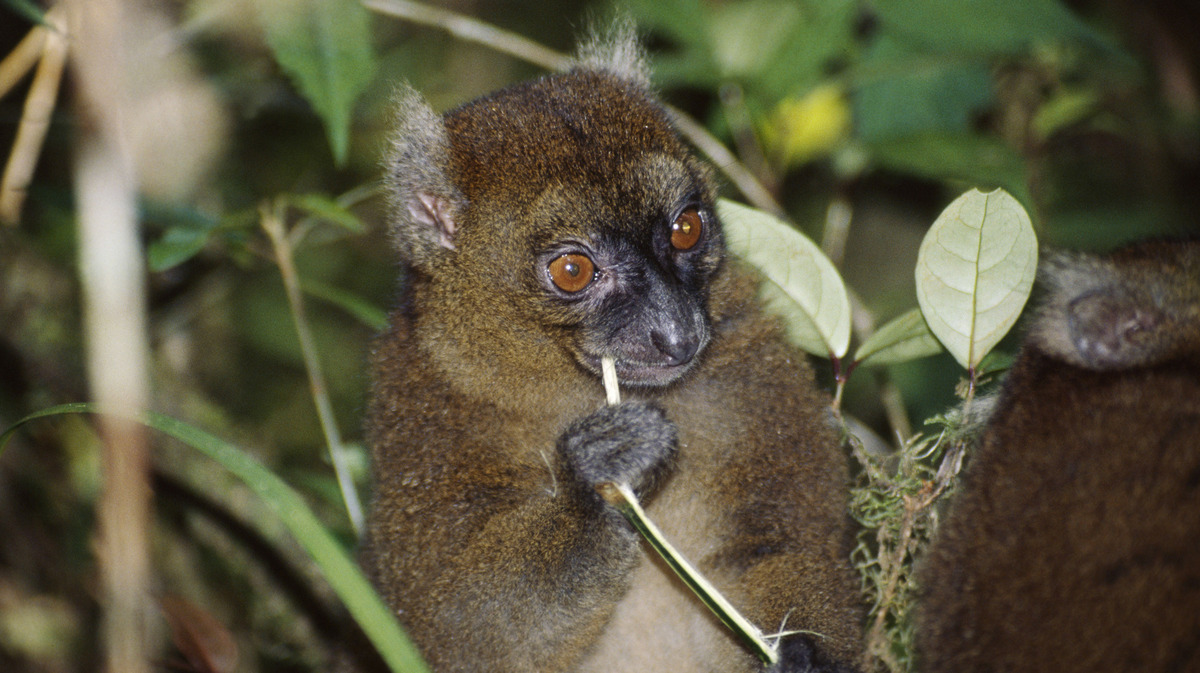 A greater bamboo lemur in Ranomafana National Park, Madagascar, in 2000. Scientists say their numbers have dwindled due to slash-and-burn agriculture and climate change, which have reduced the amount of fresh bamboo available to them.

Deep in the Madagascan rain forest, a lemur and his daughter chatter softly as they climb through towering spires of bamboo.

Tiny, furry creatures, with snub noses and tufts of white hair sprouting from their ears, they exchange purr-like noises to keep tabs on each other's whereabouts. They definitely don't want to get separated.

Scientists say these two are likely the last remaining greater bamboo lemurs in the entire 160-square-mile national park, a rare sanctuary for wildlife on this Indian Ocean island. To find the two little lemurs, guides track through the dense bush, imitating their calls.

As few as 60 greater bamboo lemurs are left in the wild, and no more than 150, making them among the most critically endangered primates on the planet.

The greater bamboo lemur once lived all over Madagascar, fossil records show, but years of slash-and-burn agriculture and deforestation have decimated the population. Scientists say what may ultimately doom the species is something far more insidious: the effects of climate change on their teeth.

As their name suggests, this species of lemur eats almost exclusively bamboo. Shifts in rainfall patterns mean there aren't enough fresh shoots and leaves. Instead, the lemurs have to increasingly eat tough bamboo stalks to survive. This severely damages their teeth — and their ability to continue eating.

In effect, climate change may be starving the greater bamboo lemur into extinction.

This sort of indirect climate consequence is a major threat to biodiversity around the world, breaking the fragile interdependence among plants, insects, animals and birds.

Sarah Zohdy, a postdoctoral fellow at Emory University, says that many of Madagascar's animals are highly specialized in their diets and habitats. This may have provided them with an evolutionary advantage in the past, but today it leaves them vulnerable to any shifts in equilibrium.

"The greater bamboo lemur is a great example of what could happen and what probably is happening to very specialized species all over the world," she says.

Madagascar's unique wildlife, in other words, might be the canary in the world's climatic coal mine.

Ecologists consider Madagascar to be a biodiversity hot spot — a critical bulwark of biological heritage. Up to 80 percent of its flora and fauna are found nowhere else on earth.

The country's impoverished people have been badly affected by the dramatic pace of deforestation, with changing weather patterns compounding the problem. The Malagasy, as residents are known, currently face a serious food shortage after erratic weather and a locust invasion led to a disastrous harvest of rice, the main staple crop.

The disappearance of the lemur would also have a major impact on the country's human population.

Madagascar hosts more than 100 different types of lemurs, the country's most iconic animal and biggest tourist draw. The diminutive primates helped to attract 255,000 visitors in 2012.

Even more had arrived in the years before a 2009 coup that triggered political turmoil, illegal logging and even lemur hunting.

And yet their prospects are grim. The lemur is the world's most threatened mammal, with most species and subspecies vulnerable to extinction, according to the International Union for Conservation of Nature.

In July, a group of primate specialists warned that lemurs could be extinct in the wild within 20 years if lemur hunting and illegal logging aren't stopped.

More than 90 percent of Madagascar's original forests are gone, mainly due to slash-and-burn farming and logging. On the 10-hour journey by road from the capital, Antananarivo, to the Ranomafana National Park, stands of trees are visible only when nearing the conservancy gates.

Major donors, including the U.S. Agency for International Development, had suspended funding for environmental programs after the coup, but there are hopes for greater stability, donor funding and even foreign investment following the peaceful elections held in late October this year.

Patricia Wright, a professor at Stony Brook University and one of the world's leading lemur experts, describes Madagascar as a window into what might soon be happening in all of the world's tropical rain forest areas.

"Everybody knows about polar bears and the effects of climate change on the poles. But few people are really focused on the fact that so many changes are happening even in the tropical areas," says Wright. "The tropical areas are where much of our oxygen is being generated, and it's also where a lot of our human poverty is focused. So what happens in these tropical areas is really going to impact everybody in the world."

Scientists are finding that, in addition to constraining critical food sources like bamboo, climate change threatens to harm lemurs in even more obscure ways. Duke University researchers published a study this year looking at how climate change affects parasites that can infect lemurs.

Warmer temperatures mean that parasites can grow and reproduce more quickly, and survive at higher elevations, harming lemur populations that have never before encountered certain pests.

In fact, scientists say the parasites whose numbers are increasing are those most likely to sicken and kill lemurs. Some of the parasites can also potentially harm humans and domestic animals.

Another study by U.S. researchers, published in the journal Global Change Biology, found that reproductive patterns of the Milne-Edwards' sifaka lemur at Ranomafana park may be affected by El Nino and cyclones.

The researchers noticed that when it rains heavily, the lemurs aren't active; they just hunker down and wait for the rain to stop.

Fecundity "was negatively affected when El Nino occurred in the period before conception, perhaps altering ovulation, or during the second six months of life, possibly reducing infant survival during weaning," the researchers wrote.

An earlier study by Stony Brook's Wright found that just a slight change in climate can dramatically impact infant mortality rates of the sifakas. Because female lemurs need large amounts of water to produce enough milk for their young, even a minor reduction in rainfall can affect their babies' chances for survival.

"Madagascar has been isolated [from Africa] for 150 million years, and the plants and animals are very special," says Wright. "They're not found in any other place in the world. If we lose these animals and plants, then we lose them forever from this earth."

"It's frightening, and we don't want to lose our ancient ancestors," she says.

Zohdy, who studied the effects of a changing climate on the teeth of greater bamboo lemurs, says their specialized diet means they are very vulnerable to any shift in climate.

"If they can't eat, they die," she says. "You can't go to the bamboo lemur dentist and get dentures."

Zohdy says there is evidence that Madagascar's deforestation is contributing significantly to shifts in weather patterns, worsening the effects of extreme weather such as cyclones. Fewer trees mean less of a buffer for the island when it is hit by yearly cyclones, resulting in more destruction for animals and humans.

"When I started working here there were 10 of the greater bamboo lemurs left in the national park, and now there are only two of them," says Zohdy. "There is no way they're going to survive if things keep going as they are now."