Accessibility links
Photos Reveal Harsh Detail Of Brazil's History With Slavery : Parallels The South American country was the last place in the Americas to abolish slavery and that period coincided with a boom in the then new medium of photography. what resulted is arguably the largest archive of photographs of slavery in the world, and that is giving new insight to academics and ordinary Brazilians on the country's brutal past. 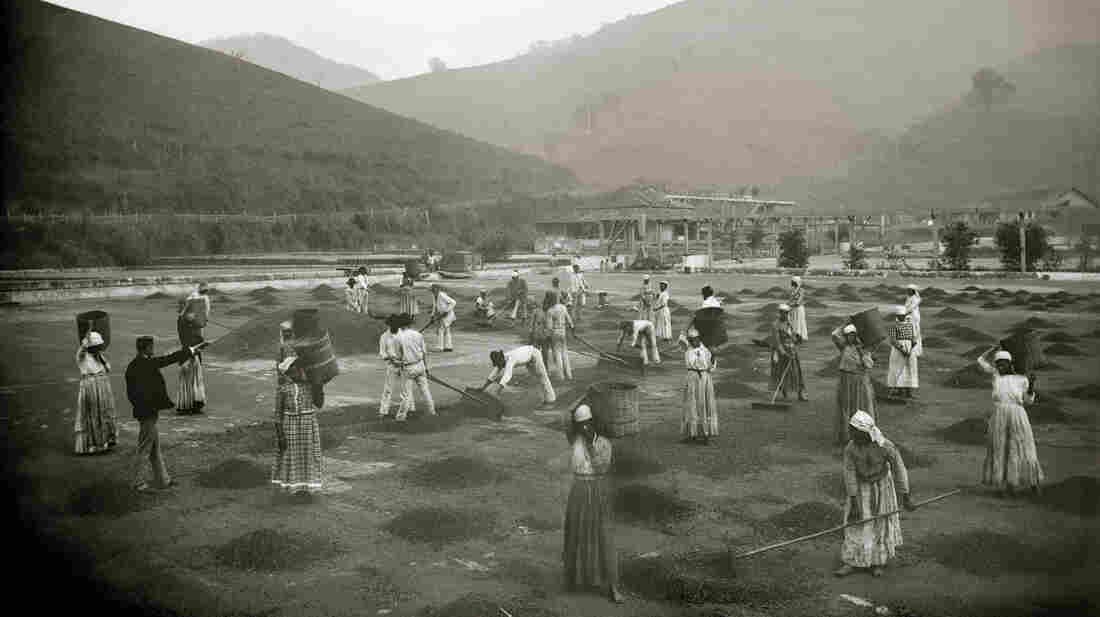 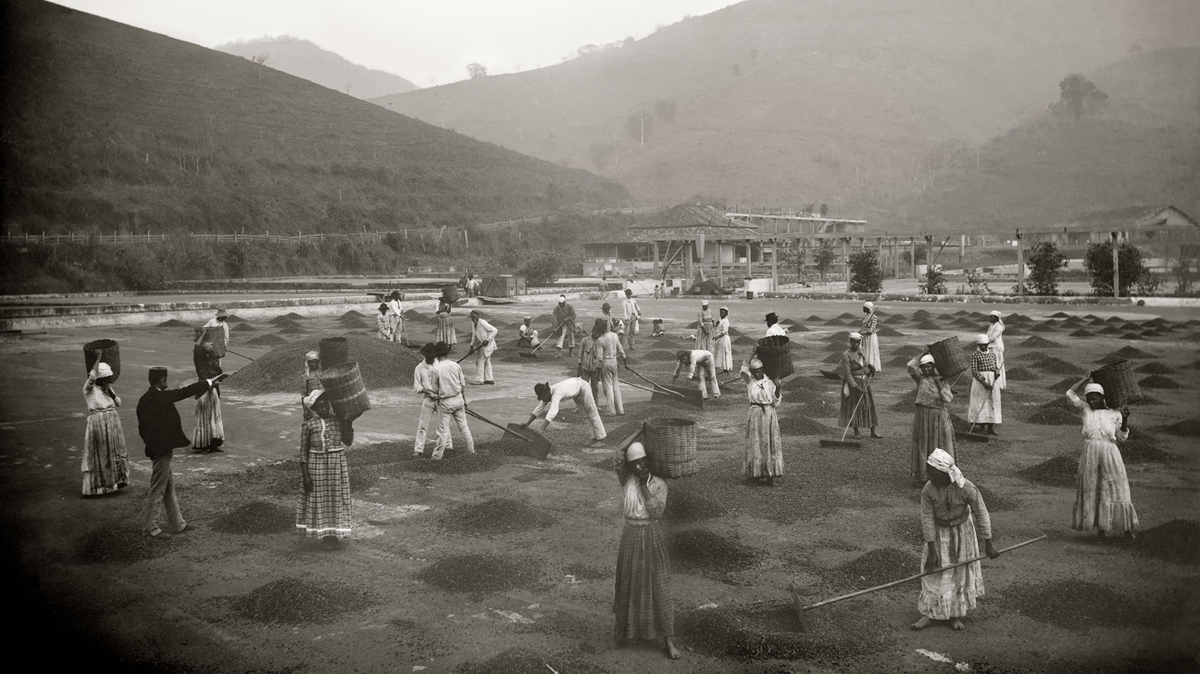 Brazil was the last place in the Americas to abolish slavery — it didn't happen until 1888 — and that meant that the final years of the practice were photographed.

This has given Brazil what may be the world's largest archive of photography of slavery, and a new exhibition in Sao Paulo is offering some new insights into the country's brutal past.

One image at the exhibition, for example, has been blown up to the size of a wall. "Things that you could never see, suddenly you see," says anthropologist Lilia Schwarcz, one of the curators of the new exhibition called Emancipation Inclusion and Exclusion.

A Photo History Of Slavery In Brazil

In its original size and composition, the image from photographer Marc Ferrez, one of the most impressive photographers from 19th century Brazil, shows a wide shot of a group of slaves drying coffee in a field. Their faces are indistinct but the overall impression is one of order and calm. But once the picture is blown up, the expressions become distinct and details emerge. A female slave is breastfeeding a child in the field; clothes that look neat are seen to be tattered.

"Expanding the photos, we can see a lot of things we couldn't see and the state didn't want to see," Schwarcz says. "We do not want to show slaves only like victims."

Slavery in Brazil lasted for 300 years, and it imported some 4 million Africans to the country. These images were taken during the waning days of slavery and Brazil's monarchy. Many were commissioned by the state in an attempt to show slavery in a better light. 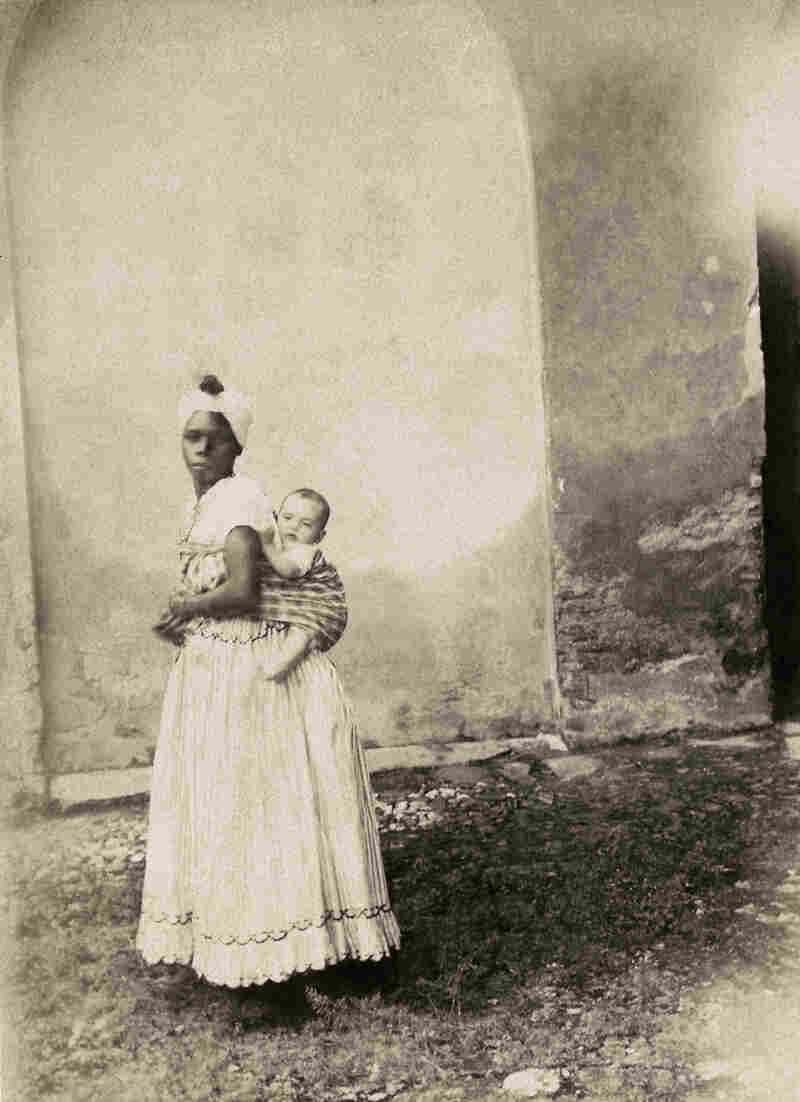 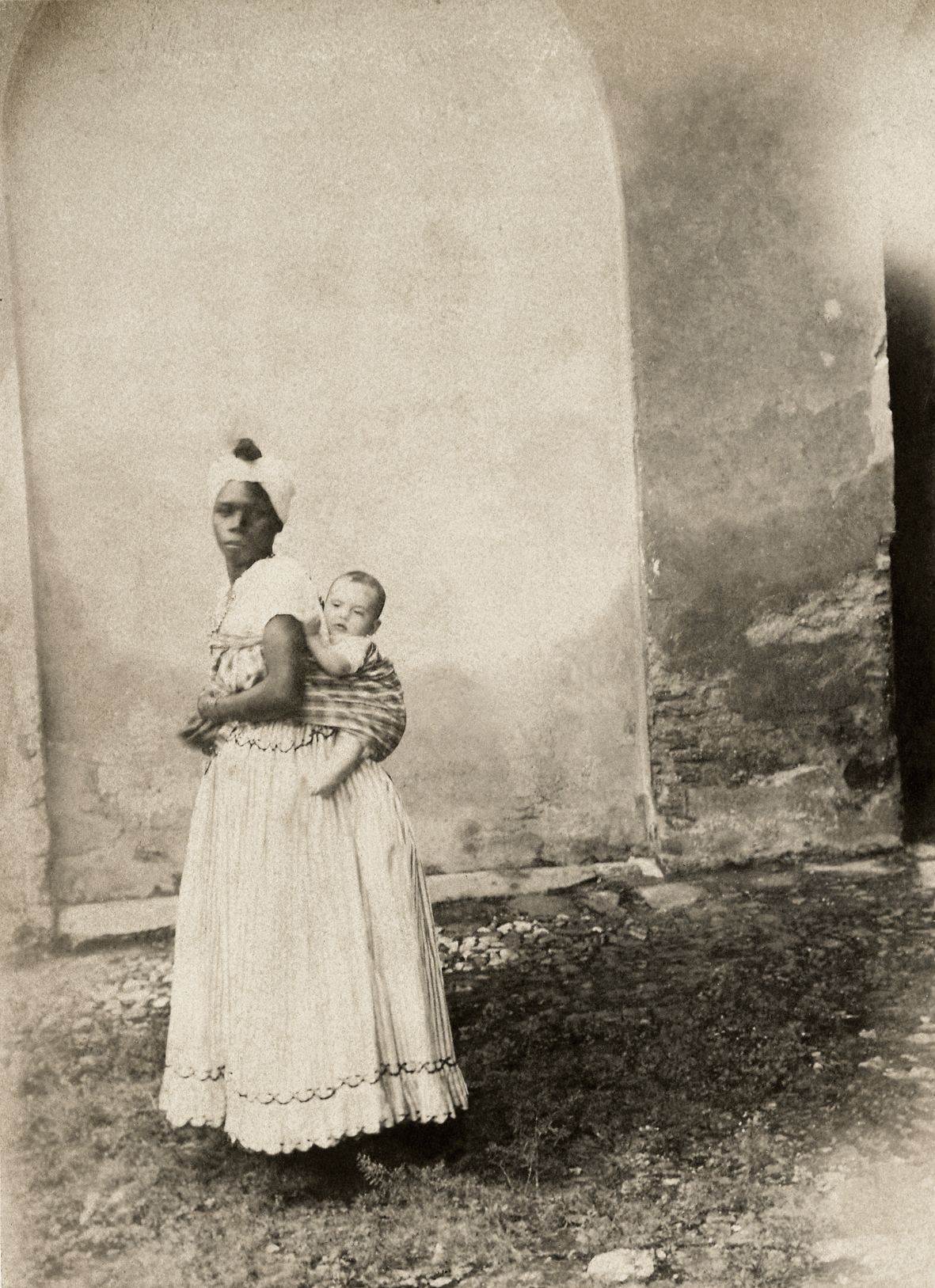 Black woman with white child on her back. Bahia, 1860.

Sergio Burgi with the Moreira Salles Institute, which donated the photographs to the show, says blowing up the images shows the underlying brutality of the system. In another image, slaves are lined up waiting to be taken into the field. All are barefoot. In between them, once the image is enlarged, we can see many young children.

"Its incredible what you see," Burgi says. "The amount of children who very early go out ... how would they manage to take care of these children out in the fields?"

Lilia Schwarcz says the slave system was based on violence, and the photos, when when viewed closely, show just how violent that system could be. Whats astounding about the exhibition is the variety of situations that slaves were photographed in: not only in the fields but in their owners' homes, in the city and taking care of the white children of their masters.

One of the most striking images is of a white woman sitting in a litter. The two slaves that would carry her through the streets of the city are standing next to her. One looks down, in deference. The other man is leaning against the litter, his hat tipped at a jaunty angle, staring straight at the camera. 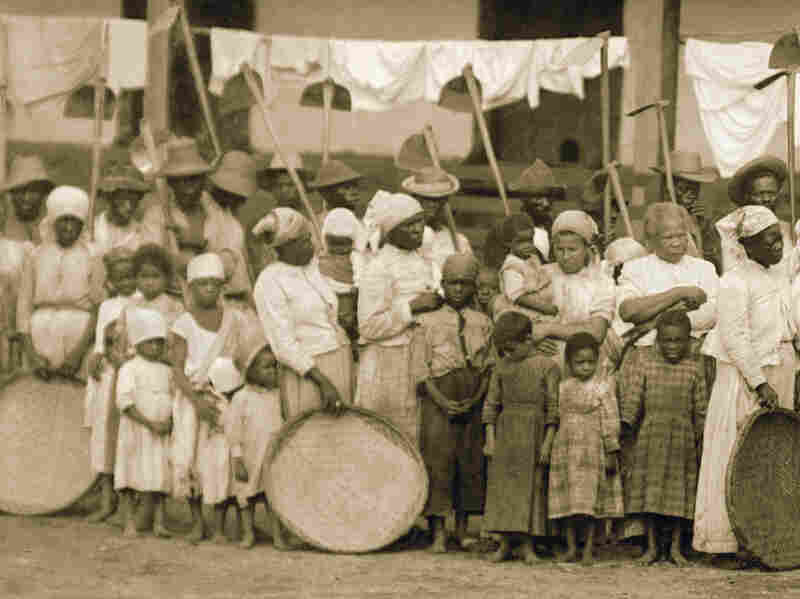 A detail from a photo of slaves going to the coffee harvest with oxcar. Vale do Paraiba, Sao Paulo, 1885. Moreira Salles Institute Archive hide caption 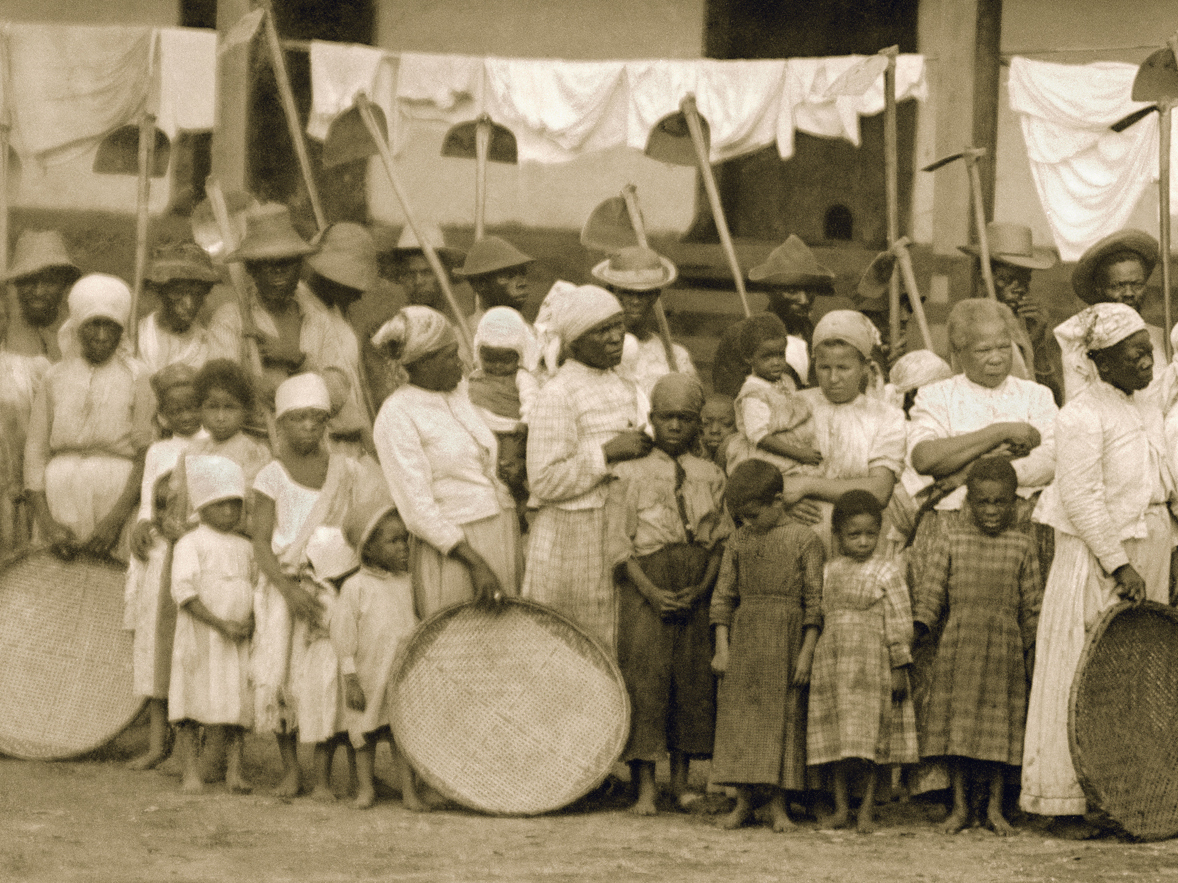 A detail from a photo of slaves going to the coffee harvest with oxcar. Vale do Paraiba, Sao Paulo, 1885.

The images in the exhibition were taken from 1860 to 1885. Slavery ended in Brazil in 1888, and the photos also reveal a tricky and difficult moment for slave owners in Brazil, says Maria Helena Machado, a historian who also contributed to the exhibition.

Machado says the late 19th century was even more brutal than before because, with slavery about to end, owners wanted to get as much as they could in terms of slave work. "They are not concerned anymore about surviving, so who cares? 'I need to get my money back,'" she says. 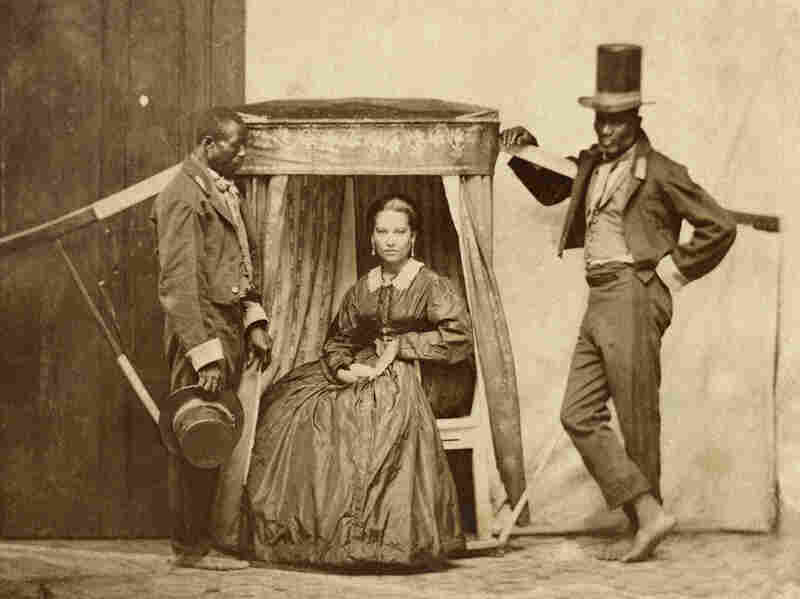 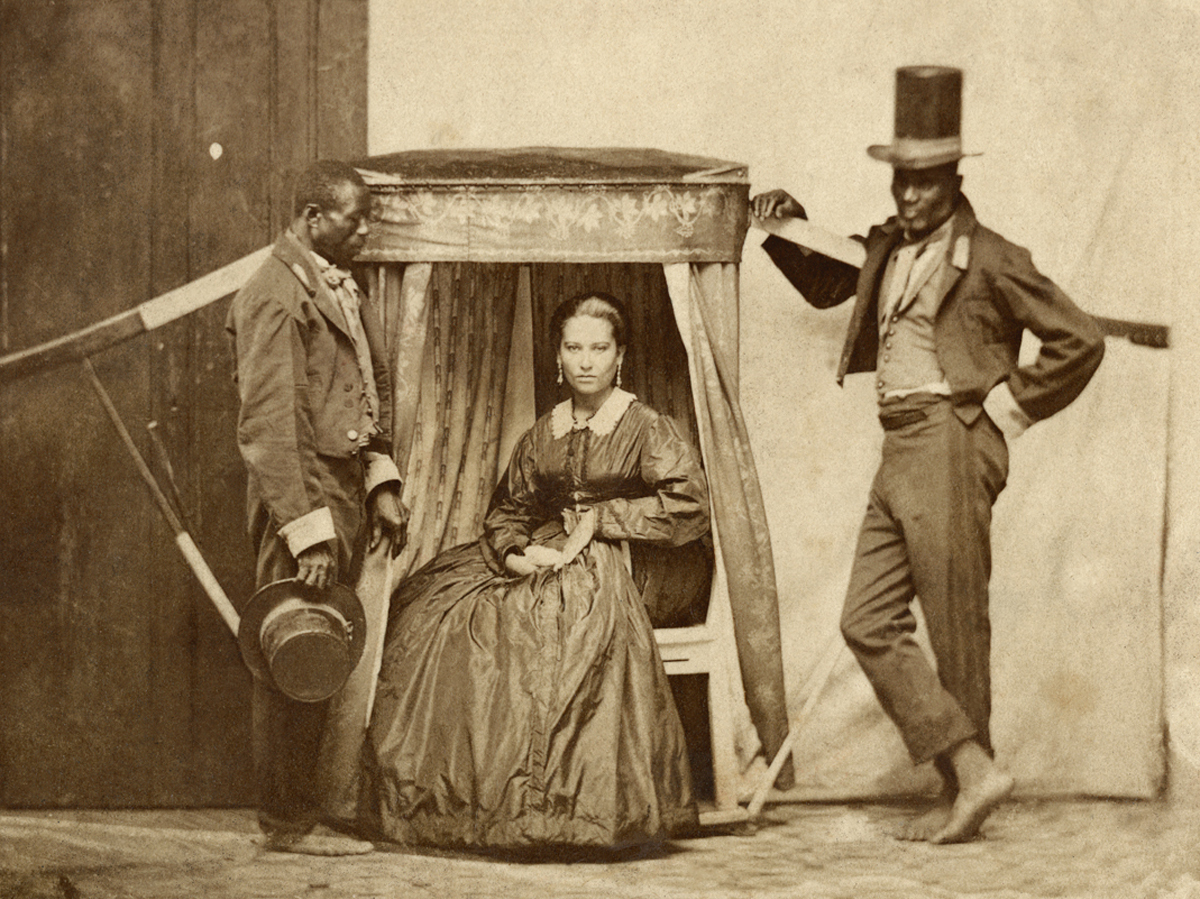 Machado says many slaves were running away, while others had formed armed bands and were revolting. The enlarged images show the look in the eyes of the slaves. The battle, says Lilia Schwarcz, is very evident.

"They were fighting for their freedom," she says. "So you have here a discussion about freedom."

A discussion that curator Sergio Burgi says continues today, with the people who have come to see the exhibition. "People here in Brazil have reacted in very interesting ways saying 'Oh that reminds me of my time as a kid, and I used to live in a rural area and everything looked similar,'" he says.

Burgi says even decades after slavery, blacks lived in the same conditions, and that legacy continues to resonate today.

The exhibition runs through the end of December at the University of Sao Paulo.