Accessibility links
Can The Philippines Save Itself From Typhoons? : Parallels With thousands of islands in the warm waters of the Pacific, the Philippines are destined to face angry tropical storms year after year. The country is better prepared than in the past, but could perhaps learn lessons of countries like India and Cuba that have made major progress in coping with potential disasters.

Can The Philippines Save Itself From Typhoons?

Can The Philippines Save Itself From Typhoons? 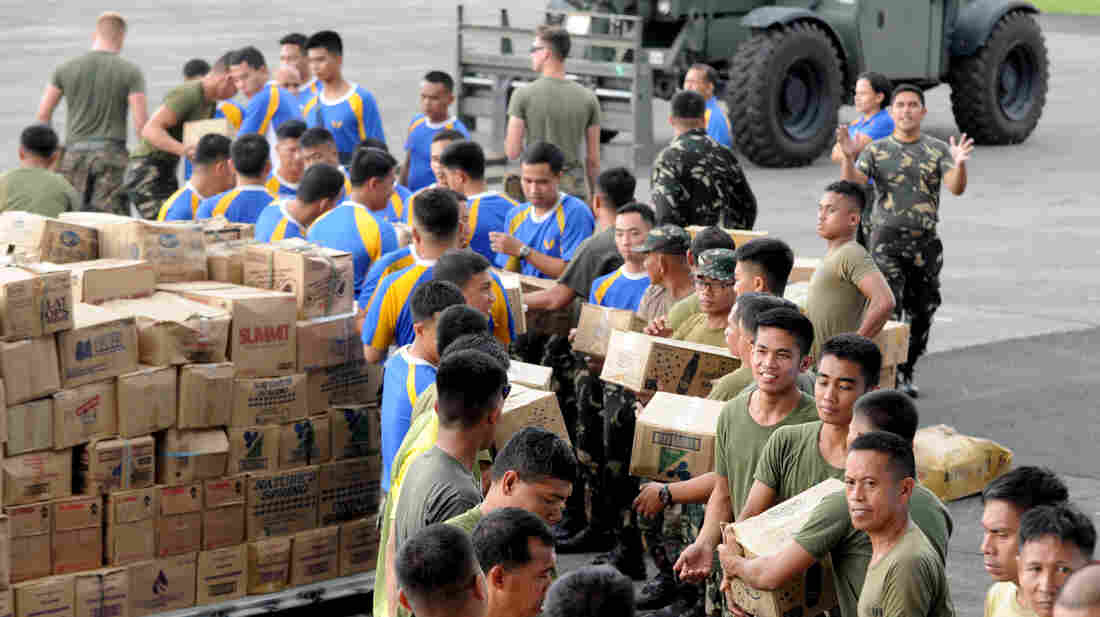 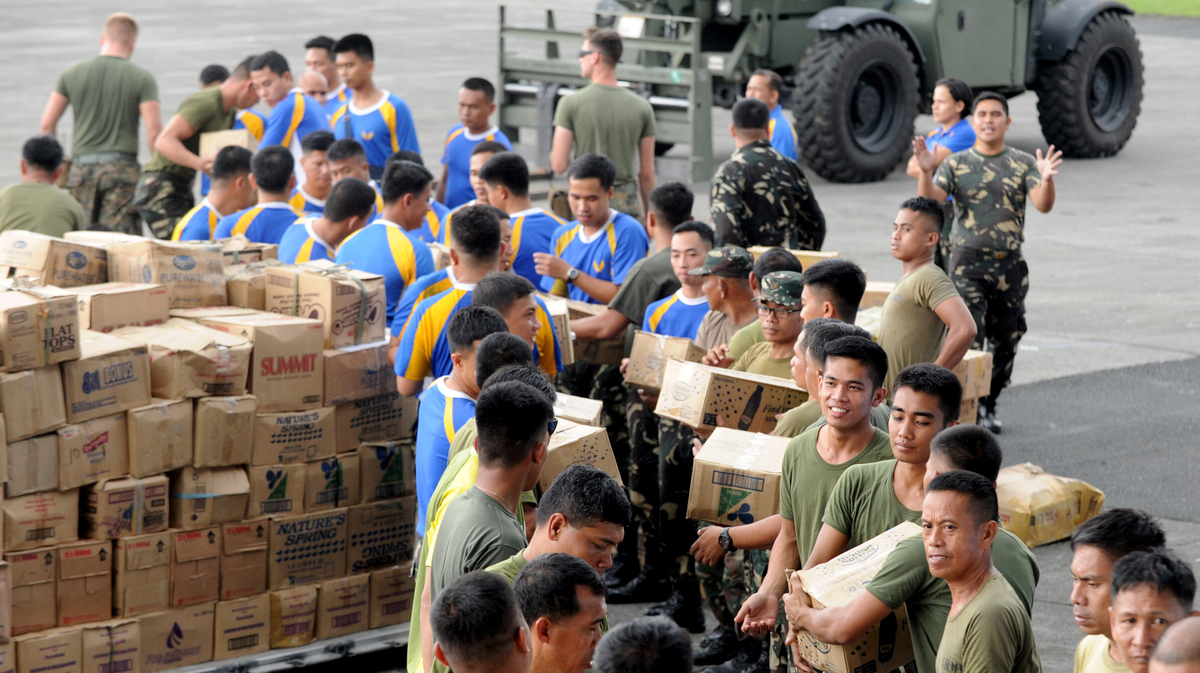 U.S. and Filipino military personnel prepare relief goods in Manila for transport to the hard-hit city of Tacloban.

For the third year in a row, the Philippines has been hit by a major storm claiming more than 1,000 lives, and the death toll from Haiyan, one of the worst on record, could climb to 10,000.

With thousands of islands in the warm waters of the Pacific, the Philippines is destined to face the wrath of angry tropical storms year after year.

So what can a poor, densely populated country do to mitigate the huge loss of life and the massive destruction?

Here are some of the challenges and potential solutions for this recurring nightmare facing the Philippines.

The Curse Of Beautiful Islands: Stunning islands lined with palm trees and set in a sapphire sea are great for a tropical vacation and a monstrous logistical headache if you are trying to prepare for or respond to a typhoon.

It's much faster and cheaper to move large numbers of people and supplies in cars and trucks. But with everyone living on islands, mass evacuations are extremely difficult to pull off. To make things more difficult, many Filipinos are impoverished and live in badly constructed homes on land that is vulnerable to severe weather.

Given the geography, the Philippines needs planes and helicopters, boats and ferries to move people out and send assistance in.

Still, the Philippines has limited resources. After Hurricane Katrina hit New Orleans in 2005 and Superstorm Sandy hit the Northeast last year, the U.S. government pumped in billions of dollars for relief and recovery.

The Philippine government has so far proposed a $50 million effort, Steven Rood, who represents the Asia Foundation in the Philippines, told NPR. He estimates that the government has perhaps $1 billion a year in its budget to handle such emergencies.

Calling On The U.S. Military: The Philippines has turned to the U.S. military for help on multiple occasions. The Americans used to have major bases and thousands of sailors and airmen based in the Philippines, but the bases were closed in 1992 in large part because the Philippines wanted them out.

Now it takes U.S. forces longer to get to the scene of a disaster. The U.S. has so far sent several hundred Marines from Japan. An aircraft carrier is on the way, but it's not expected for another couple of days, or nearly a week after the typhoon hit.

Marine Brig. Gen. Paul Kennedy, who's leading the U.S. effort, has flown over the devastated city of Tacloban and on NPR's Morning Edition, he described the challenges he faces:

"A first priority is a place where we can land even 30 airplanes. You take for granted all the infrastructure that goes into running an air field. You need a tower. You need lights. You need electricity. You need gas. You need space to offload your aircraft. You need people with forklifts. You need all of that, none of which is present. It has been destroyed or washed out to sea or washed into the interior of the city." 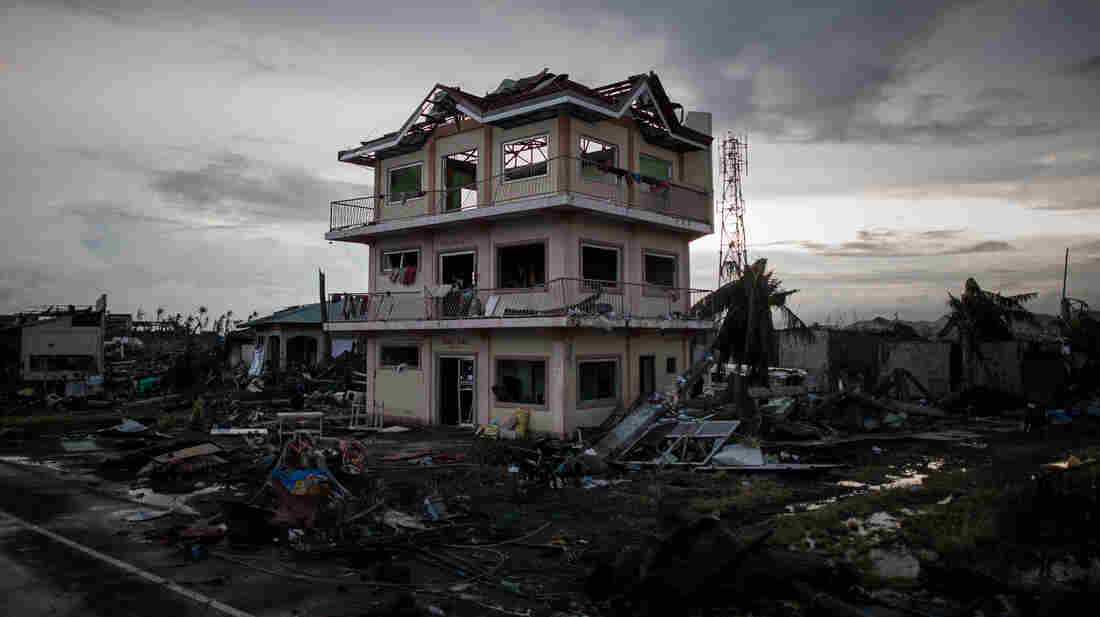 The sun sets behind a house damaged by Typhoon Haiyan outside the hard-hit city of Tacloban. The Philippines has gotten better at preparing for typhoons, but remains extremely vulnerable. Philippe Lopez/AFP/Getty Images hide caption 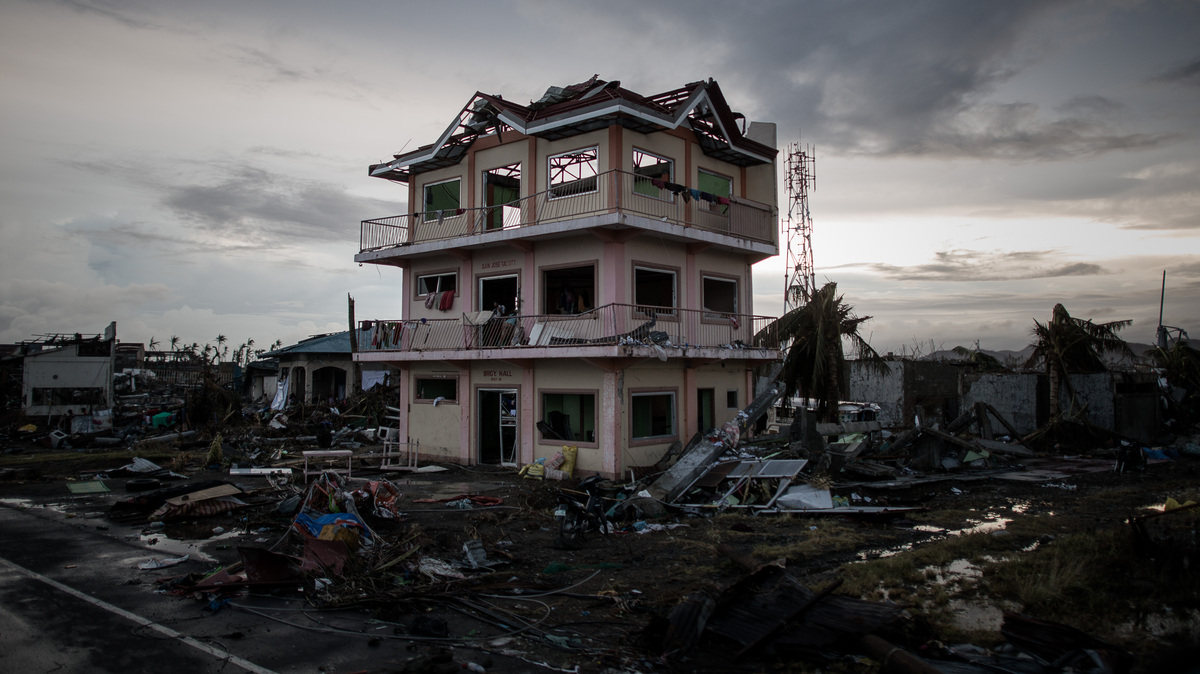 The sun sets behind a house damaged by Typhoon Haiyan outside the hard-hit city of Tacloban. The Philippines has gotten better at preparing for typhoons, but remains extremely vulnerable.

Improved Planning: When it comes to preparation, the Philippines may want to study two countries that have made major progress in coping with typhoons, cyclones and hurricanes: India and Cuba.

When a large cyclone hit the eastern Indian state of Orissa last month, the death toll was fewer than 30 people. In the past, such storms have killed thousands.

Indian officials cited more detailed weather forecasts and the fact that most people now carry cellphones or have access to television news, which allows them to stay informed and brace for storms.

Perhaps most important, the government has dramatically expanded its network of shelters.

When a huge cyclone hit in 1999, Orissa had only 20 shelters, and 10,000 people were killed. Now there are hundreds of shelters, and local officials have the authority to decide when people should evacuate their homes and head for the shelters.

In the Caribbean, Cuba has placed a premium on preparing for hurricanes, and it boasts a remarkable record in recent years. Since 2001, 35 deaths have been reported from 16 hurricanes and tropical storms.

This includes massive hurricanes in 2004-2005, considered two of the most powerful in the past century. In each of those cases, more than 1.5 million people were evacuated, fleeing the coasts for higher ground inland. Schools and businesses were closed well before the hurricanes hit.

And when Cubans reached the shelters, food, water and medical treatment were readily available.

But in the Philippines, planning for future typhoons will have to wait until the current crisis is dealt with.

The government now estimates that about 7 million people were affected by Friday's massive storm, while the U.N. Office for the Coordination of Humanitarian Affairs puts the figure at close to 10 million.