Accessibility links
Like Food And Water, Women's Safety A Priority For Relief Aid : Parallels Women and girls are at increased risk of violence during humanitarian crises. But resources to address that often come after the initial disaster response. This week, aid groups and governments pledged to do something about it.

Like Food And Water, Women's Safety A Priority For Relief Aid

Like Food And Water, Women's Safety A Priority For Relief Aid 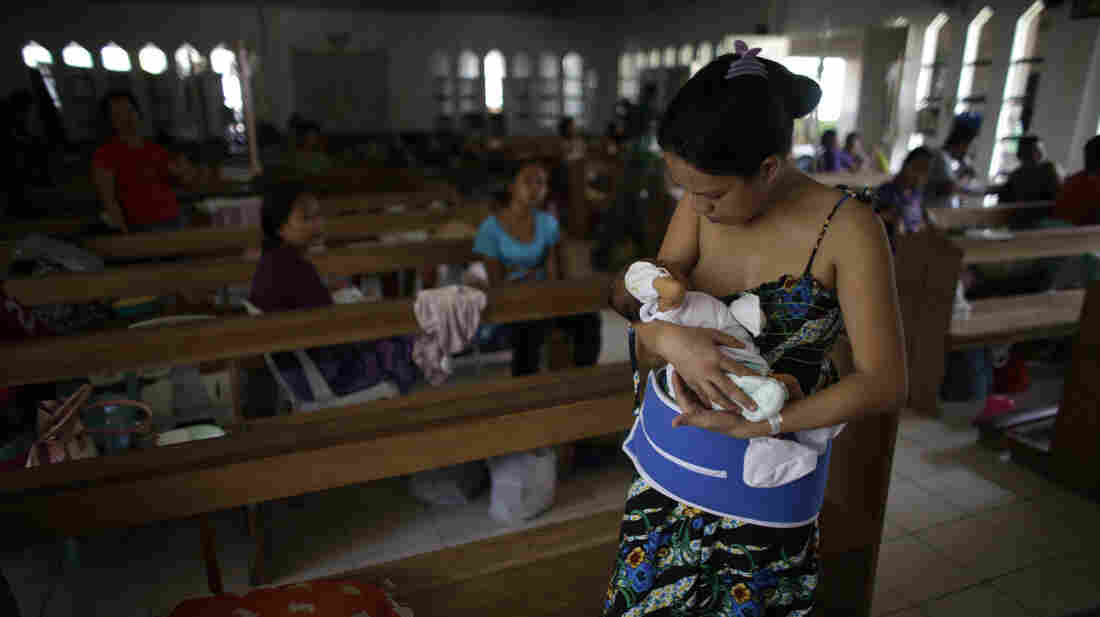 A mother breastfeeds her baby inside a chapel that was turned into a makeshift hospital after Typhoon Haiyan battered Tacloban city in central Philippines. John Lavellana/Reuters/Landov hide caption 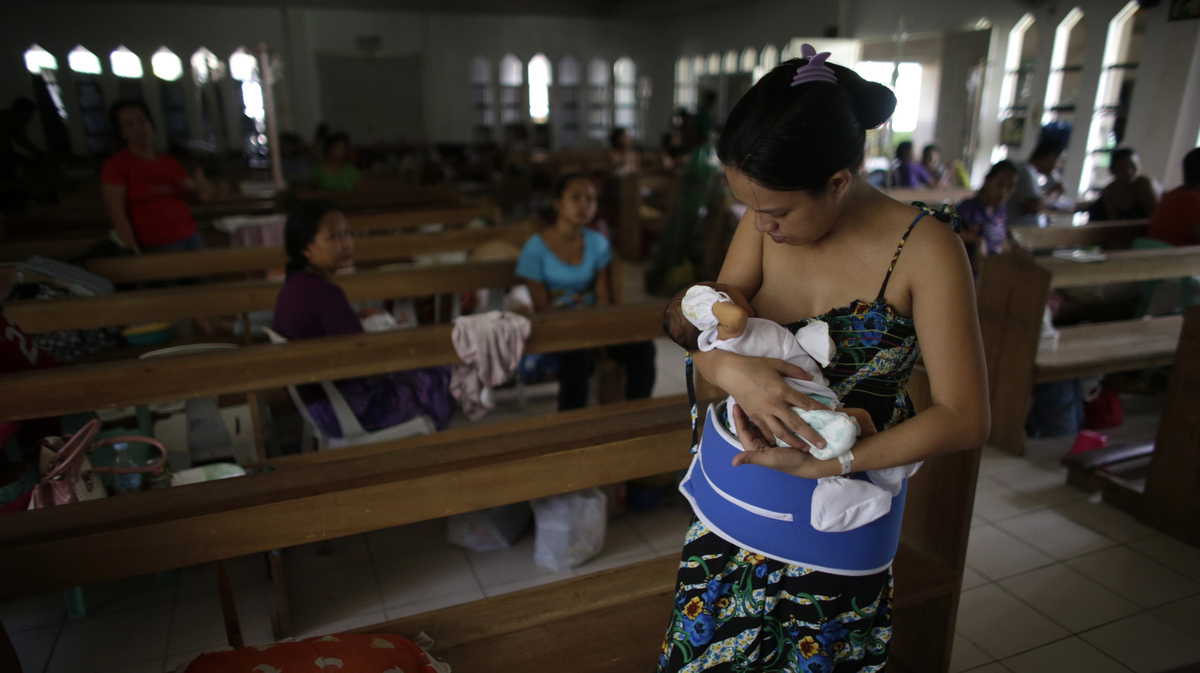 A mother breastfeeds her baby inside a chapel that was turned into a makeshift hospital after Typhoon Haiyan battered Tacloban city in central Philippines.

In natural disasters and war zones, food and water aren't the only basic needs, aid and human rights groups say.

Humanitarian crises immediately put women and girls at higher risk of violence, with displacement, loss of security and the breakdown of institutions. Rape in post-earthquake Haiti and in refugee camps in Kenya filled with Somalis fleeing drought and war are just two of many tragic examples. But resources for addressing the issue tend to lag until after the demands of other basic needs.

They should go hand in hand, say representatives of governments and aid groups at an international conference in London earlier this week. They pledged to prioritize the safety of women and children from the very start of an emergency. They also pledged nearly $67 million in funding to programs in current crises, such as Syria, Congo, Pakistan and Ethiopia.

Parties signed on to a list of commitments, including a promise to address gender-based violence "before waiting for evidence of specific instances of [violence] to emerge."

British Secretary of State Justine Greening, a co-host of Wednesday's conference, summed up the current situation this way:

"So little has protecting girls and women in emergencies been a priority in the past, that even the most basic steps for preventing violence got forgotten — things like having separate toilets for women that can be locked from the inside, adequate lighting at night and making sure girls and women can access food, water and fuel safely."

Some governments and organizations are already considering violence against women in the aid they provide. For the victims of Typhoon Haiyan, for example, the British government is sending solar lanterns with cellphone chargers. 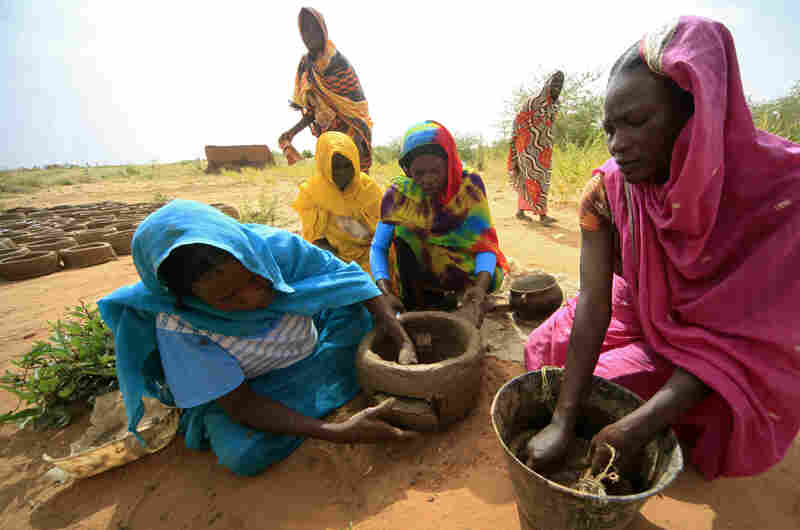 Women make fuel-efficient mud stoves in Darfur, Sudan, in October 2012. The stoves save women trips for firewood, a task that leaves them vulnerable to attack. Mohamed Nureldin Abdallah/Reuters/Landov hide caption

"These allow women and girls to move more safely after dark and increase channels of communication which will improve the safety of women and girls," Greening said Wednesday.

The U.K. is also requiring all of its aid partners "to assess the risk of violence to women and girls and address their specific needs."

Other initiatives to safeguard displaced women have sprouted up around the world in recent years. In the Darfur region of Sudan and neighboring Chad, solar cookers and fuel-efficient stoves have reduced the need for treks for firewood, which put women at risk for attack. Rape during Syria's current conflict led to a social media effort to map violence against women, as NPR's Deborah Amos has reported.

Another commitment from the conference is to "promote and support the implementation of comprehensive sexual and reproductive health, psychosocial and mental health services from the onset of an emergency and throughout the life of the humanitarian response."

For reproductive health needs, there are international standards that don't require an assessment of a particular situation. Among the goals of these standards is preventing sexual violence, which requires a combination of security, education and health services (such as emergency contraception).

But will all this talk make any difference? Researcher Ravi Verma thinks so. Verma, Asia regional director for the International Center for Research on Women, says he was impressed by the clear, concrete commitments made at the gathering — including nearly $67 million in pledged funding.

"This meeting gives me hope that there will be a tangible response," he says.

How Midwives Have Become Critical In War Zones

Verma would like to see more proactive prevention initiatives, though. And more data. For example, he says, there should be ongoing data collection about the vulnerabilities in a given region: Where are services available in case of emergency, and where are there gaps?

Such information could help tailor aid quickly. It could also help with coordination across sectors to provide the right aid to the right places. But, he says, there are some things that don't need to be decided on a case-by-case basis — reproductive health services, for instance.

Moreover, Verma says, dealing with violence against women and girls in emergencies is part of the fight against daily inequality.

"They're not independent of each other; they all come from the same drivers," he says. "It is about how gender is constructed and how women and girls are seen as instruments of power."

The U.S. has agreed to host a follow-up gathering in 2014, to assess the progress that has been made on the commitments.