Accessibility links
A Chronic Problem In Disaster Zones: No Fuel : Parallels Typhoon Haiyan, like many disasters that preceded it, created a critical shortage of gasoline. This hampered ordinary Filipinos trying to rebuild their lives, as well as aid organizations trying to help them. One U.S. group has made it its mission to provide free gas. 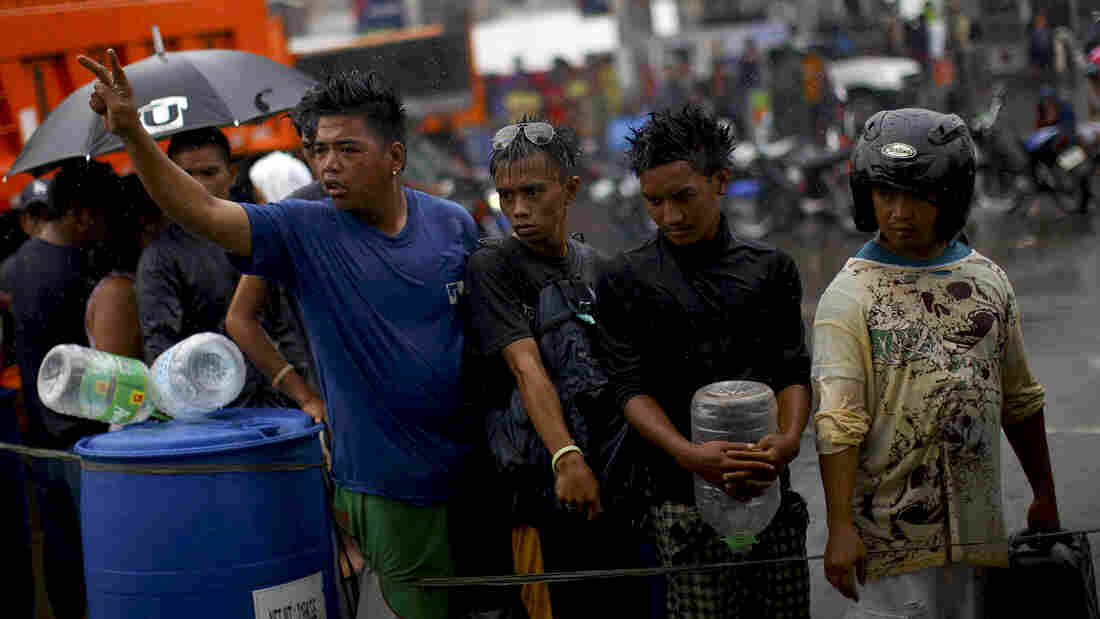 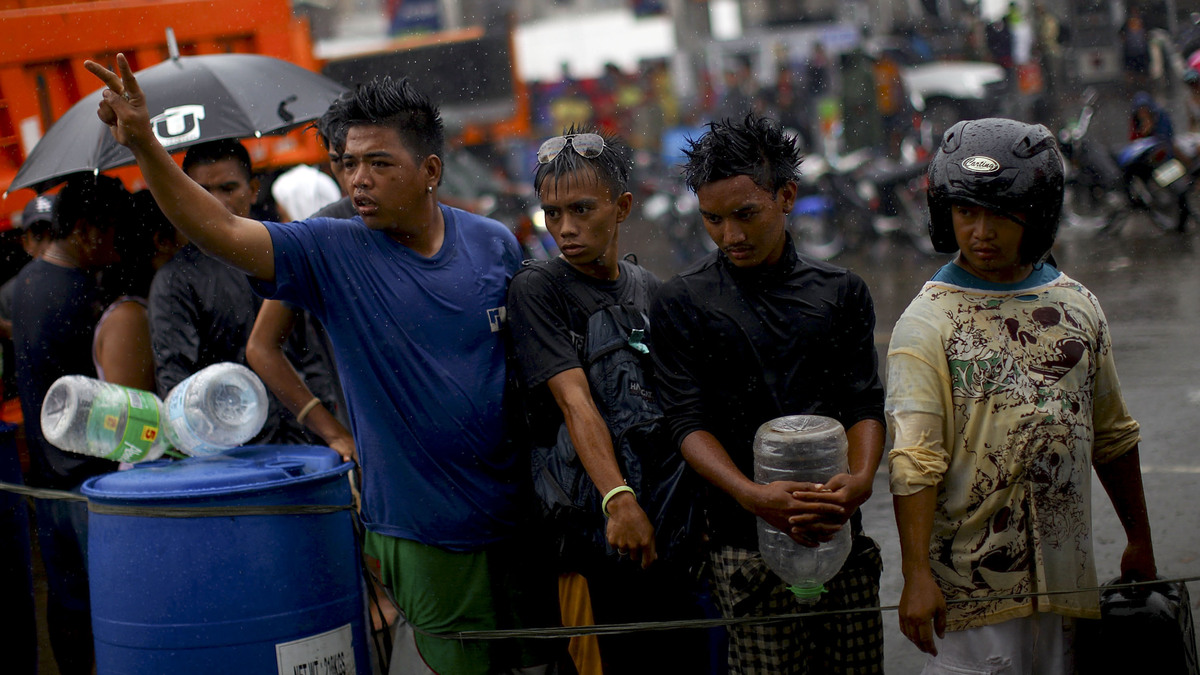 Filipino men stand in line to fill containers with gas in Tacloban, Philippines, on Sunday. The area experienced widespread gas shortages in the wake of Typhoon Haiyan.

In the wake of any natural disaster, there are almost always shortages of fuel. Even in the United States, gas stations shut down during blackouts because there's no electricity to run their pumps.

It was no different in the Philippines, where practically no fuel was available after Typhoon Haiyan struck. Aid agencies said the lack of gasoline was a major impediment to relief efforts.

One small American nonprofit called the Fuel Relief Fund is trying to change that.

Immediately after Haiyan hit, all the gas stations in Tacloban were shut, along with everything else. Many of the stations were damaged; none had electricity. The storm had caused so much destruction that fuel wasn't even available on the black market.

So when a couple of gas stations opened almost a week later, people waited in long lines to fill jerrycans, plastic containers, Coke bottles and motorbikes with gasoline. 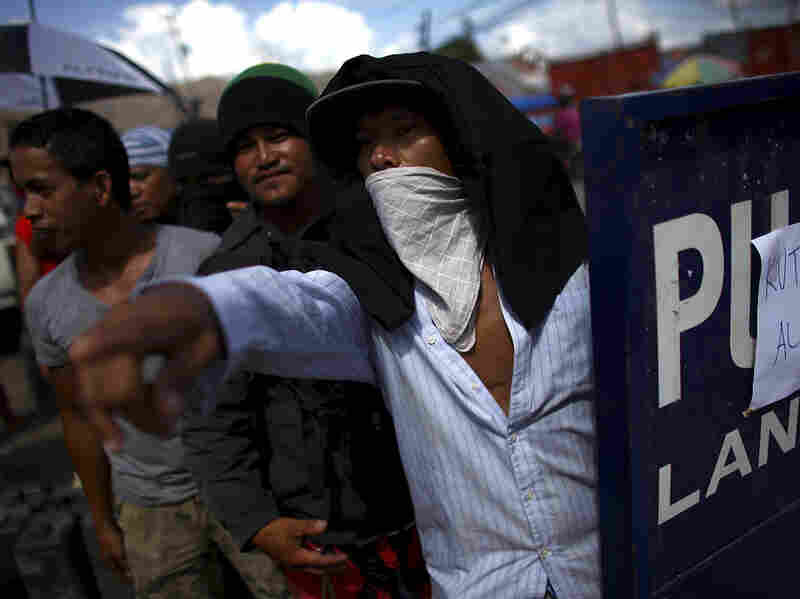 A man yells at a gas station attendant after waiting in line for hours to fill a 3-liter bottle. David Gilkey/NPR hide caption 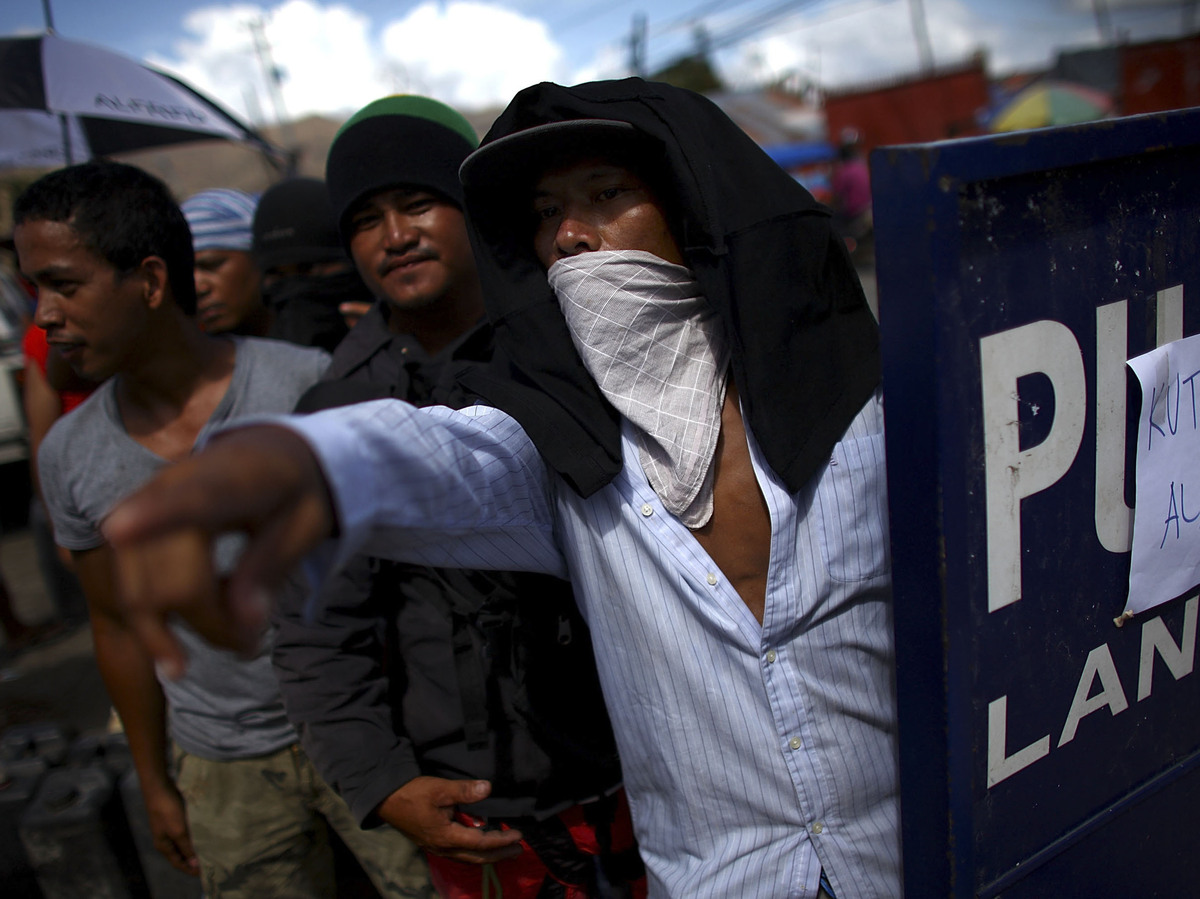 A man yells at a gas station attendant after waiting in line for hours to fill a 3-liter bottle.

At a Shell station on Real Street in Tacloban, the manager, Sel Ragas, says they're rationing the unleaded fuel at just 1.5 liters per person — essentially, people were waiting three to four hours to get less than half a gallon of gas.

"The problem is that some of these people are selling it for 300 [pesos] per liter," Ragas says. "So we have our limitations."

That markup is roughly six times the going rate.

Even with these tight limits, Ragas says she's worried her station is going to run out of gas before another truck can come to refill the tanks.

After Hurricane Katrina hit the U.S. Gulf Coast in 2005, a group of people involved in the California oil industry took note of the severe gas shortage in southern Louisiana. So they sent a tanker to New Orleans and started giving away free fuel.

Out of that, the Fuel Relief Fund was born.

"We saw people standing around in lines for fuel and thought we'd do something about it," says Ted Honcharik, the group's chairman.

Now, they're giving away fuel in the Philippines in areas affected by the typhoon. Honcharik says the concept of his relief agency is simple: get fuel in quickly to people who desperately need it.

"We are the only organization in the world that provides free fuel after a disaster," he says.

His agency also gives fuel to any humanitarian group that needs it right now in Tacloban — though Honcharik says he hopes the relief groups can become self-sufficient in terms of fuel soon.

The Fuel Relief Fund doesn't have its own supertanker or a helicopter that drops oil barrels from the sky. Honcharik says he raises money from anybody he can — small donors, people in the petroleum industry. Then he buys fuel locally and tries to get it to where it appears most needed.

"We try to locate the closest source of fuel to the disaster. It's cheaper, and it's going to get to them that much faster," he says. "When we first got [to the Philippines] there wasn't anything available, so for the first 24 hours we were trying to source fuel out of Cebu."

Cebu is 150 miles away on a different Philippine island.

In the end, he was able to get access to fuel at a damaged Petron station in Tacloban itself.

The Fuel Relief Fund went in to Haiti to distribute gas after the earthquake in 2010. They went to Japan after the tsunami. And last year they were passing out fuel in New York after the area was hit by Superstorm Sandy.

The same way that other relief agencies serve the needs of disaster victims by giving them food, water or tents, Honcharik tries to help them get their lives jump-started with free gas.