Accessibility links
Can Child Marriages Be Stopped? : Parallels Across the developing world, 1 in 3 girls marries before age 18. Some are wed and become mothers by the time they reach their teens. In Malawi, some villages have started to punish parents who marry off their young daughters. 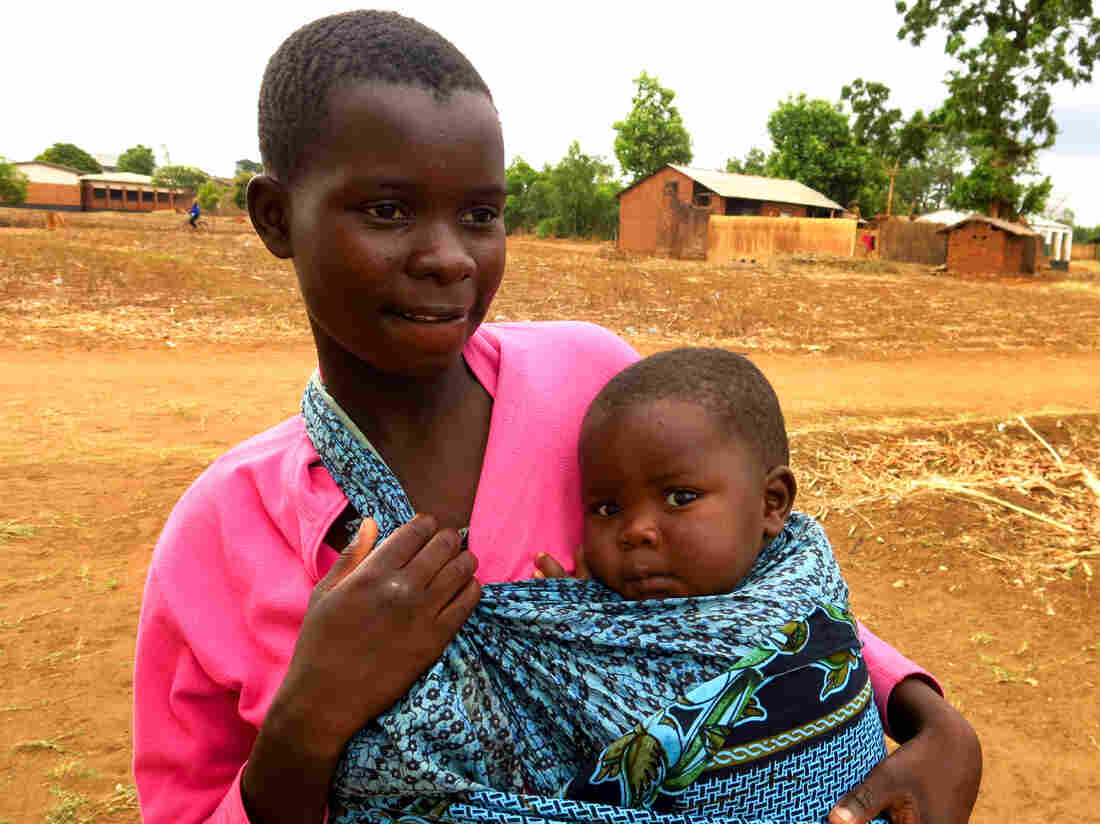 Christina Asima says she had no choice but to marry last year at age 12 to help care for younger siblings after her mother abandoned the family. But she says her husband was abusive, so she left him, and now must look after her 8-month-old son, Praise, alone. Jennifer Ludden/NPR hide caption 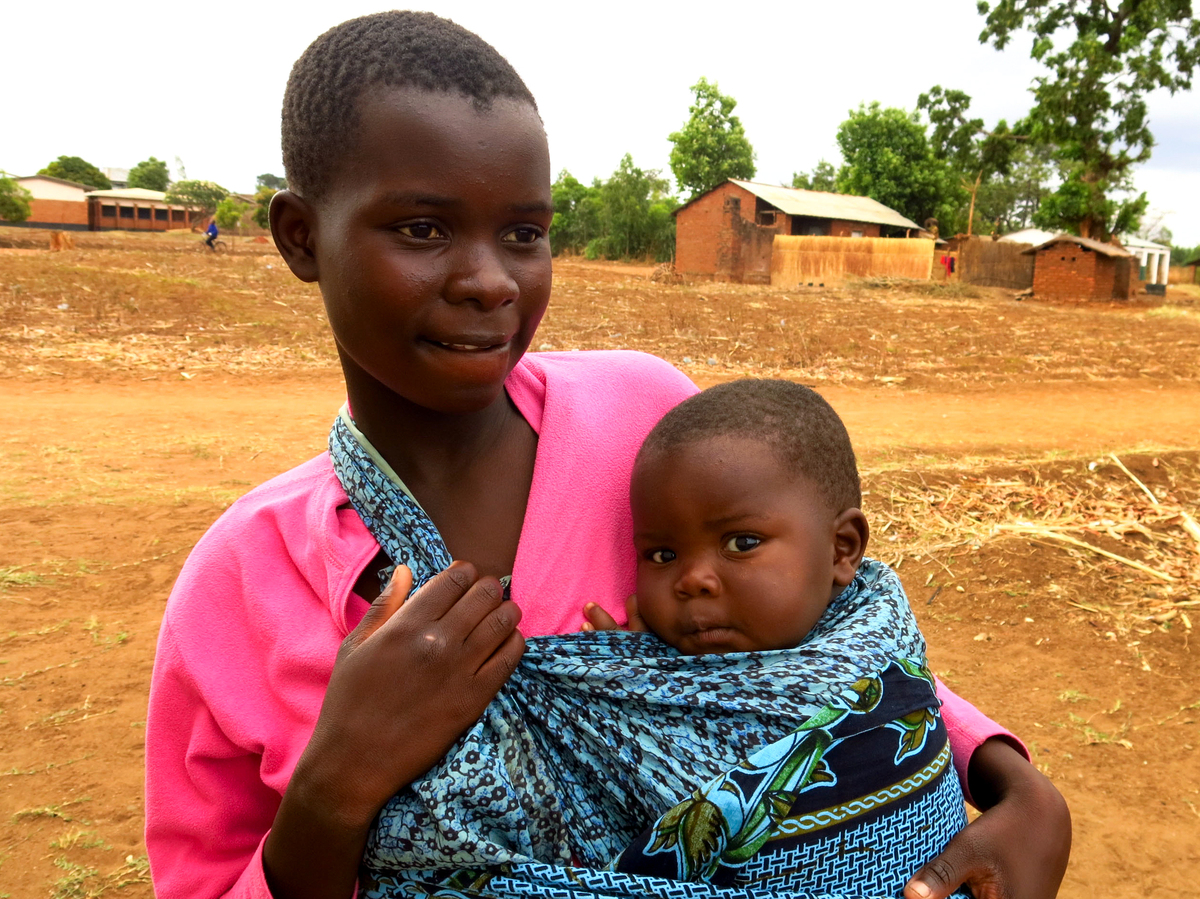 Christina Asima says she had no choice but to marry last year at age 12 to help care for younger siblings after her mother abandoned the family. But she says her husband was abusive, so she left him, and now must look after her 8-month-old son, Praise, alone.

Christina Asima seems tired for a 13-year-old. I meet the shy-mannered girl in the remote farming village of Chitera, in the southern African nation of Malawi. She wears a bright pink zip-up shirt and a blue print cloth wrapped up to her chest. Snuggled in that, hugging her side, is a chubby-cheeked baby boy.

My gut assumption is that the infant must be Christina's little brother. I know 8-month-old Praise is actually her son. Still, it's startling when, as we speak, she shifts him around front to nurse.

"I was 12 years old when I got married to my husband," she explains softly. "My mom had run away, so I was forced to get married to help my other siblings."

Despite decades of international and local efforts to curb child marriage, Christina is hardly alone. Across the developing world, it's estimated that 1 in 3 girls still marries before age 18; 1 in 9 marries before age 15. And the numbers are even worse in Malawi.

"When they see a girl child, in our country, you don't think of anything else but marriage," says Faith Phiri, a Malawian trying to change such attitudes. Five years ago she created the nonprofit Girls Empowerment Network to challenge the complex mix of culture, economics and sexism that drives child marriage.

Pregnancy Is Leading Cause Of Death

Here, as in many places, offering up a daughter for marriage can bring parents a dowry, or pay down a debt. Some see it as a way to protect a girl's virginity. The common thread is that the girl herself has no say.

All along, the girls have been so silent. ... But we're saying, 'Girls, what do you think?'

Many soon become pregnant, which can have devastating consequences. Phiri says many girls' bodies are simply not developed enough to support a baby, or to push it out.

"I've seen a lot of girls dying," she says, "one of whom was my closest friend. She was forced into marriage, got pregnant, and she did not make it."

In fact, pregnancy and childbirth are the leading causes of death worldwide for girls ages 15 to 19.

In Chitera, Phiri guides me down a rutted alley to the concrete courtyard of a mud-brick home. A girl in a denim skirt is leaning over a plastic bucket, washing white cloth diapers. 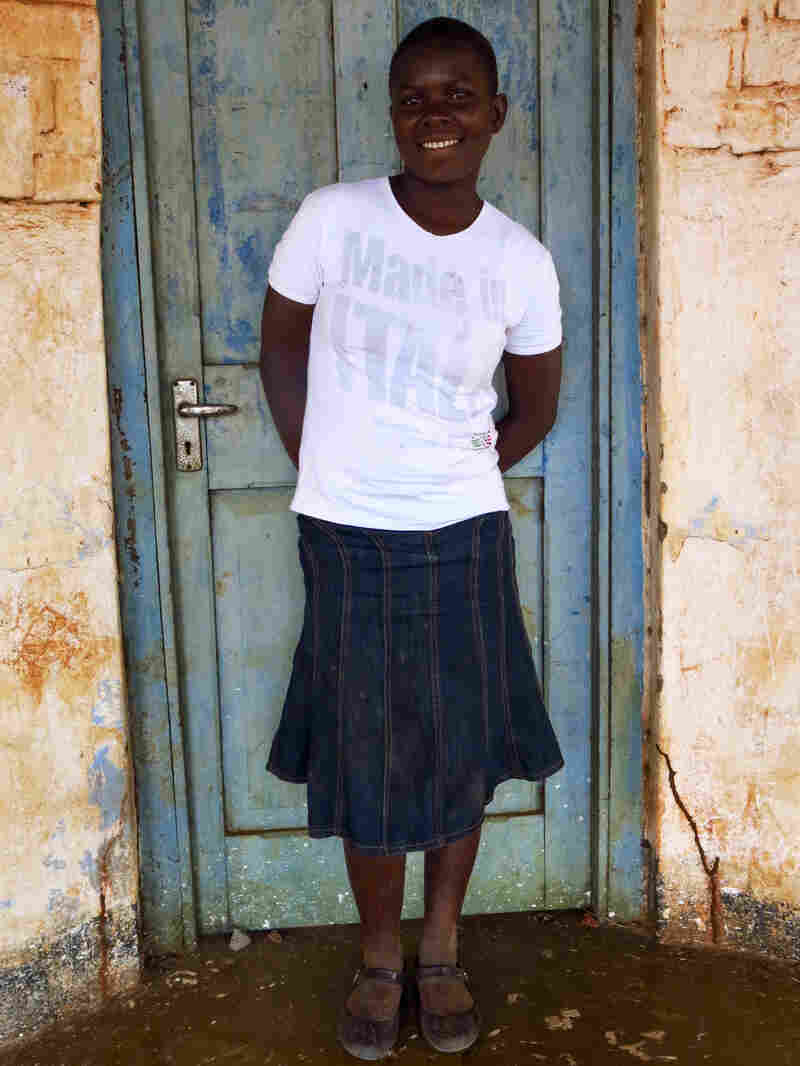 Arinafe Makwiti, 13, says her parents forced her to drop out of school and get married to an older man last year to help with the family finances. Makwiti has divorced her husband, but now has a 9-month-old daughter. Jennifer Ludden/NPR hide caption 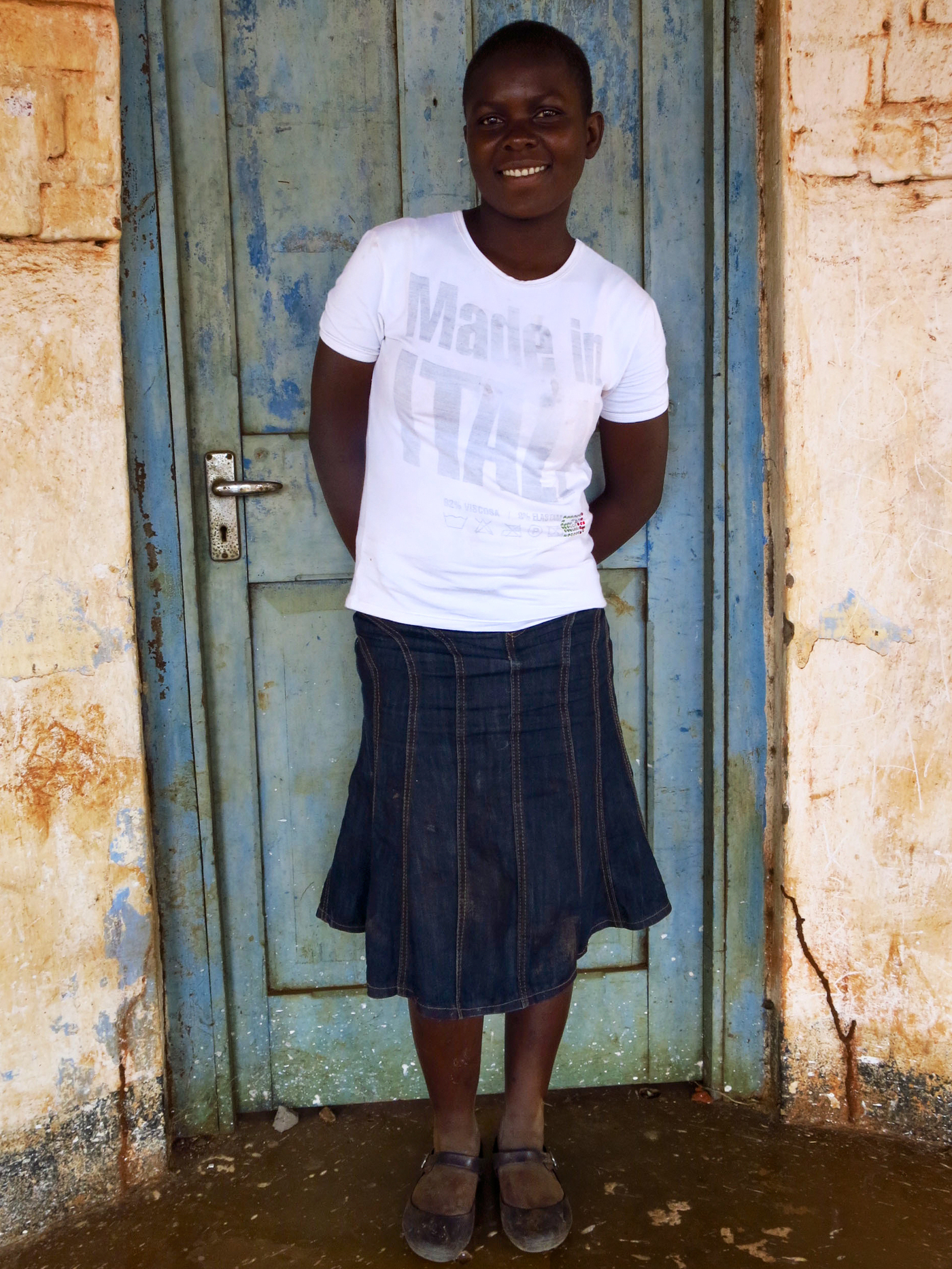 Arinafe Makwiti, 13, says her parents forced her to drop out of school and get married to an older man last year to help with the family finances. Makwiti has divorced her husband, but now has a 9-month-old daughter.

Arinafe Makwiti, 13, says the diapers are for her 9-month-old daughter. Out of earshot, she blames her parents for her situation.

"They didn't want me to go to school," she says, "but rather to get married."
There was no ceremony. No celebration. Arinafe simply moved in with her new husband's family. She says it was awful.

Patriarchy runs deep in Africa. When a girl marries young, experts say, she's often little more than a servant and is vulnerable to domestic violence. Arinafe says her husband was older — she's not sure by how much — and taller.

"The first day, it was like he was big and I felt very small," she says. I ask about her first night with the man, and she looks down to the side as she answers.

"I cried because the pain was very unbearable," she says. "He asked, 'Why are you crying?' I said, 'I'm feeling too much pain,' but he continued. Unfortunately, I got pregnant."

She and her husband have since divorced. Arinafe's mother, Rose, is not happy about the split.

"My daughter was running around too much," she tells me. "I thought marriage would settle her down." Arinafe says she wants to go back to school, but when I ask her mother about that possibility, her face hardens.

"It's more difficult than ever to come up with the school fees," she says. "My daughter used to sell oranges and mangoes. Now, she has to carry a baby on her back." 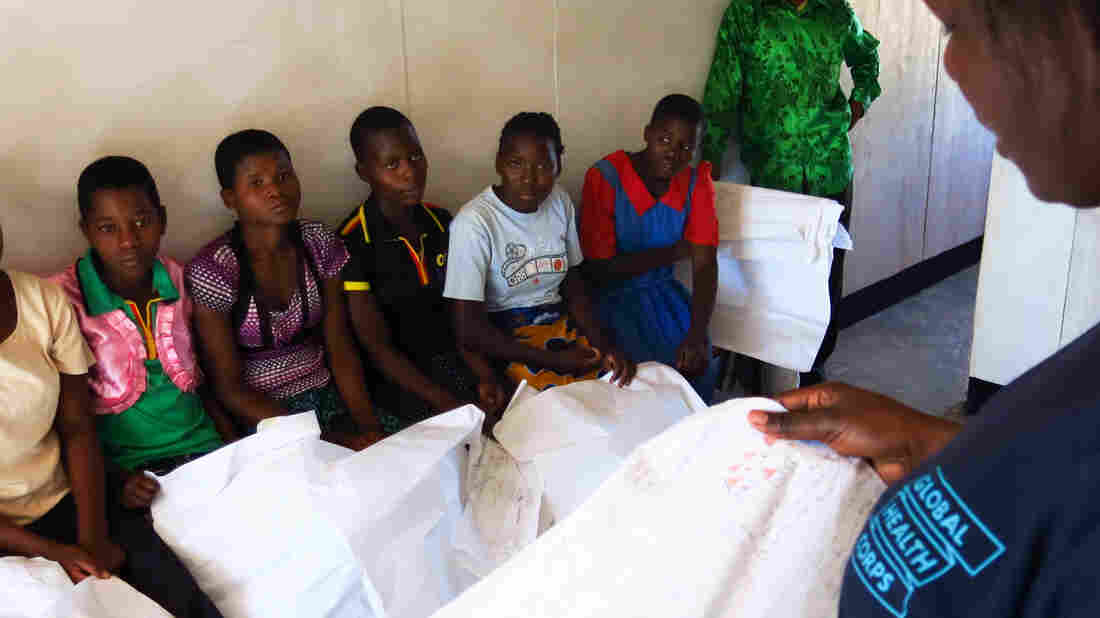 Trinitas Mhango of the Girls Empowerment Network leads a girls club in the farming village of Sandrack. The girls write out their life stories, including the daunting challenges they've faced, then set goals for what they want to be doing in five or 10 years. Jennifer Ludden/NPR hide caption 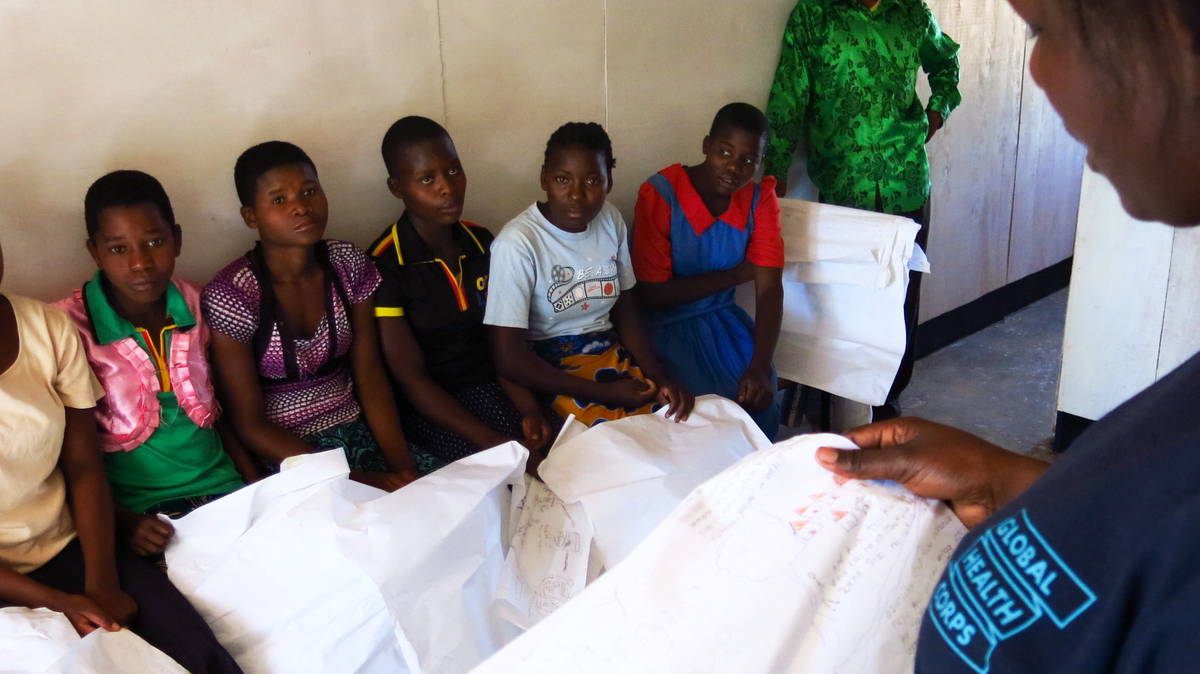 Trinitas Mhango of the Girls Empowerment Network leads a girls club in the farming village of Sandrack. The girls write out their life stories, including the daunting challenges they've faced, then set goals for what they want to be doing in five or 10 years.

"All along, the girls have been so silent," says activist Faith Phiri. "It was the communities who have been thinking for the girls. They think that, 'Marriage is good for you girls.' But we're saying, 'Girls, what do you think?' "

To that end, the Girls Empowerment Network creates girls clubs, like the one I visit in another dusty farming village an hour away, Sandrack.

Two-dozen girls are squeezed into a tiny community hall, dancing in a circle, taking turns singing in the center. Girls Empowerment organizer Trinitas Mhango greets them with a "Whoo-hoo!" and they shout back with big smiles.

Mhango has the girls tell the story of their young lives, complete with the daunting challenges they've faced so far. Then she asks them to dream, and to plan. "Ruthie," she asks one 17-year-old, "in five years, what do you want to be?"

"An accountant," Ruthie ventures, to which Mhango whoops again, and rallies the group in a round of applause.

It may seem hokey; saying you want to be an accountant doesn't get you there. But in fact, the few studies done on child marriage prevention say building this kind of social network is key. With it comes skills for public speaking, negotiating and standing up for oneself, even in front of the whole village.

The next day, it's showtime. The girls club and other young people in Sandrack are putting on their own play. A shady patch of dirt under some trees has been transformed into a stage. Village leaders settle into a front-row wood bench. Dozens more form a large circle; they've come by bike and foot from miles around to see this.

Act One: A charming man comes to court a young girl. Her parents are thrilled when he offers a backpack bursting with money. The knot is tied; the girl drops out of school. 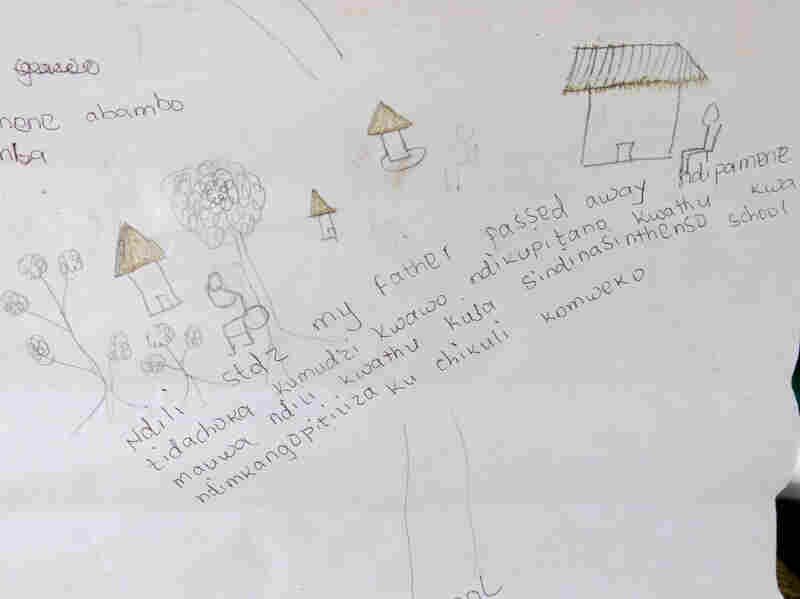 In her life story, 17-year-old Ruth Black describes how her father died while seeking work in South Africa. Black wants to be an accountant when she grows up, and girls club members have pledged to help her achieve her goal. Jennifer Ludden/NPR hide caption 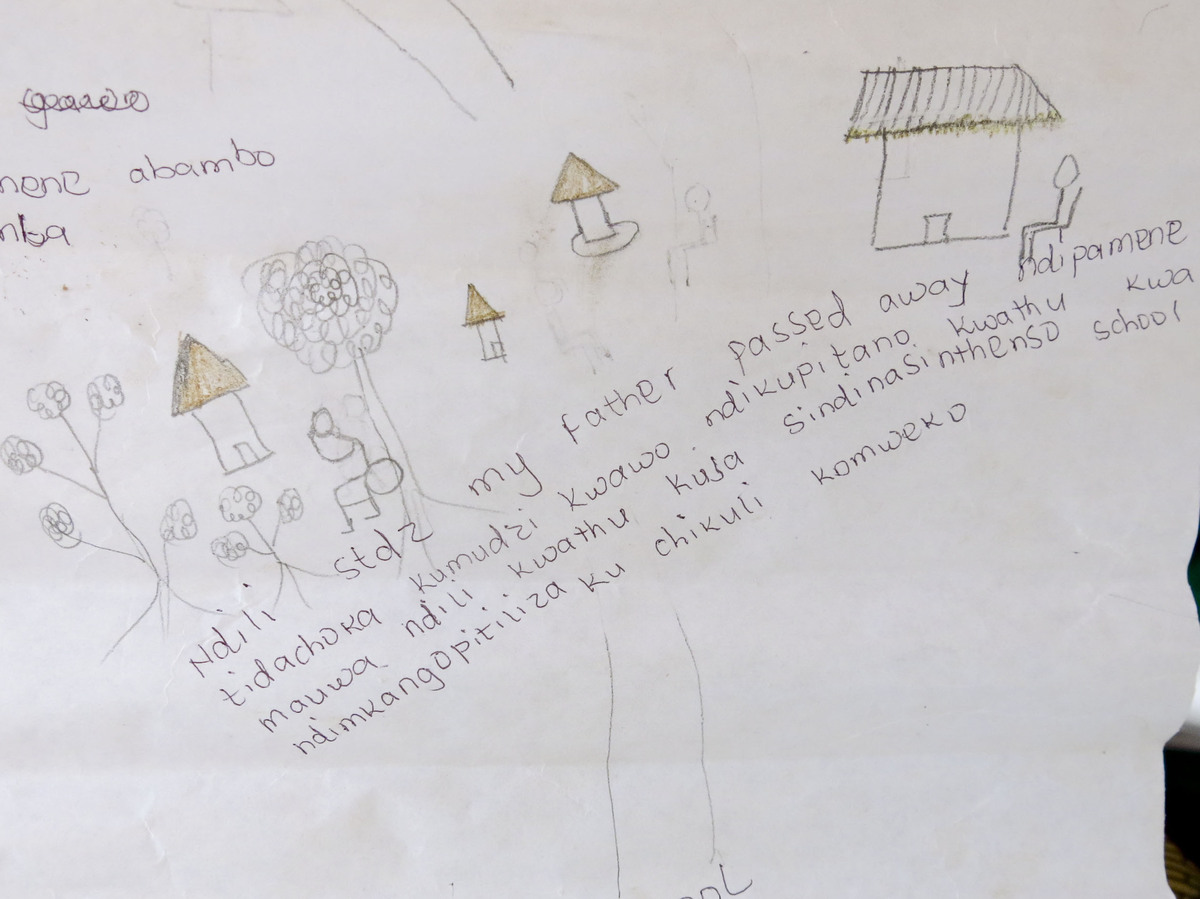 In her life story, 17-year-old Ruth Black describes how her father died while seeking work in South Africa. Black wants to be an accountant when she grows up, and girls club members have pledged to help her achieve her goal.

But in Act Two, when she goes to sell her new husband's vegetables at market, her math skills fall short. The audience hoots as she counts on fingers and toes. The young bride sells for too little. The husband is not pleased.

No subtlety there. Yet getting the message across can be tough.

Changing Laws, One Village At A Time

In both villages I visit, pretty much every adult I ask about the Girls Empowerment Network says the same thing.

"At first, we were thinking it's a matter of wasting our time," says Emanuel Mandam, a "headman" in Chitera. He didn't like the idea of ending child marriage at all, because "early marriage to us was a weapon for reducing poverty."

A girl's husband may bring a family much-needed money, he says, either through a dowry or by simply helping out with expenses. At the least, marrying off a girl means one less mouth to feed. But after the village girls presented their grievances, Mandam says, he came around.

"Education can make somebody prosper," he says, "maybe for my daughter to do better in the future."

Mandam's daughter is 12, and he says he has already begun planning the extra work he must do to continue paying her school fees.

Malawi law permits marriage at 15 with parental consent and merely "discourages" it at younger ages. But last summer Chitera passed its own legal age of marriage — 21 — with the ambitious goal that every girl attend college.

By far the biggest change: a steep penalty if parents marry off a daughter before age 21.

"They have to give five goats to the chief," says another local official, Roben Ndrama, "and eight chickens to the village headmen."

In a more humiliating measure, some parents have been made to scrub clean the local health center. Ndrama laughs when I ask if parents get mad about that.

"It's worked!" he says. "This year there've been no early marriages."

More than 20 communities have passed similar rules. Still, in a country the size of Pennsylvania, Faith Phiri faces heavy pushback as she tries to change centuries of thinking. But she hopes new attitudes are sinking in, and spreading, village by village, girl by girl.