Accessibility links
Filipino Priest Suffers With His Flock Amid Typhoon's Ruins : Parallels The Rev. Kelvin Apurillo rode out Haiyan on the second floor of his parish church. Two-thirds of his parishioners are now dead, missing or have left, and he's struggling to make sense of the destruction. In the majority Roman Catholic country, the church has played a key role in relief efforts.

Three young men dig a grave in a churchyard in San Joaquin Parish, a collection of about a dozen barrios outside Tacloban, the Philippine provincial capital ravaged by Typhoon Haiyan two weeks ago.

They roll an unidentified body wrapped only in blue plastic sheeting up to the grave on a squeaky trolley.

They drag the body into the pit, which is too small for it. The soft, sandy soil falls from their shovels, and in a minute, the crumpled blue figure disappears under the earth. 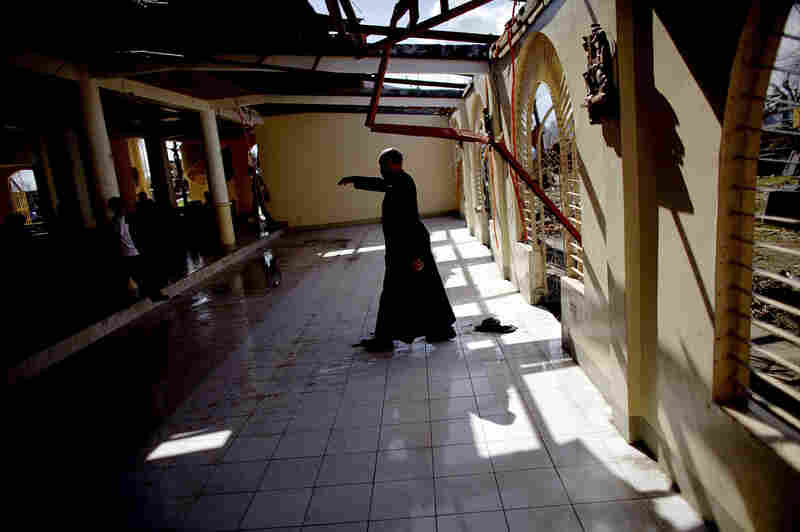 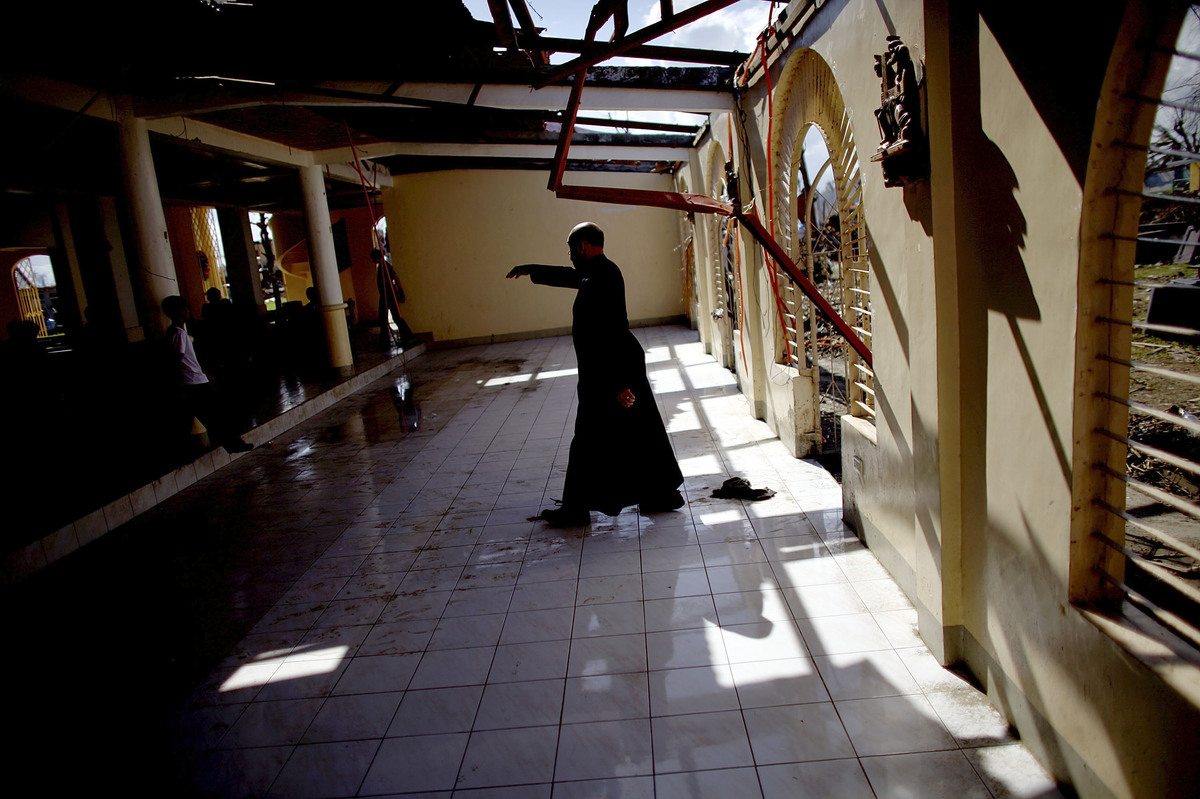 The Rev. Kelvin Apurillo of San Joaquin Parish, outside Tacloban, enters the battered parish church to celebrate Mass on Nov. 19.

The local priest, the Rev. Kelvin Apurillo, watches nearby as his parishioners are buried in these temporary graves. He has developed a close bond with his parishioners since his archdiocese transferred him here in June.

Apurillo points to the grave of a mother and child he knew and felt close to.

When he received news of their deaths, he recalls, "I was really down, because we were talking that day, because we celebrated the Mass at 5:30, since they always came to attend the Mass. I was shocked. I would say that I also was affected."

In the aftermath of Typhoon Haiyan, civil society has stepped in to help survivors where the government cannot or has not. Eighty percent of Filipinos are Roman Catholic, and the Catholic Church has played an important role in relief efforts.

'If You Suffer, I Suffer With You'

San Joaquin Parish is one example. The local archdiocese, according to its website, is not far from the place where Portuguese explorer Ferdinand Magellan and his crew held the first Mass in the Philippines on Easter Sunday in 1521. Today, only Mexico and Brazil have more Catholics than the Philippines.

When the typhoon hit, Apurillo stayed with his parishioners, riding out the storm on the second floor of the church. When the waters subsided, the priest says, bodies lay scattered around the building.

"I was able to recover a bottle of holy water. So I started blessing the dead bodies," he says. "You also feel destroyed, emotionally. But I have to be strong. I don't want them to see me crying, because they would also feel down." 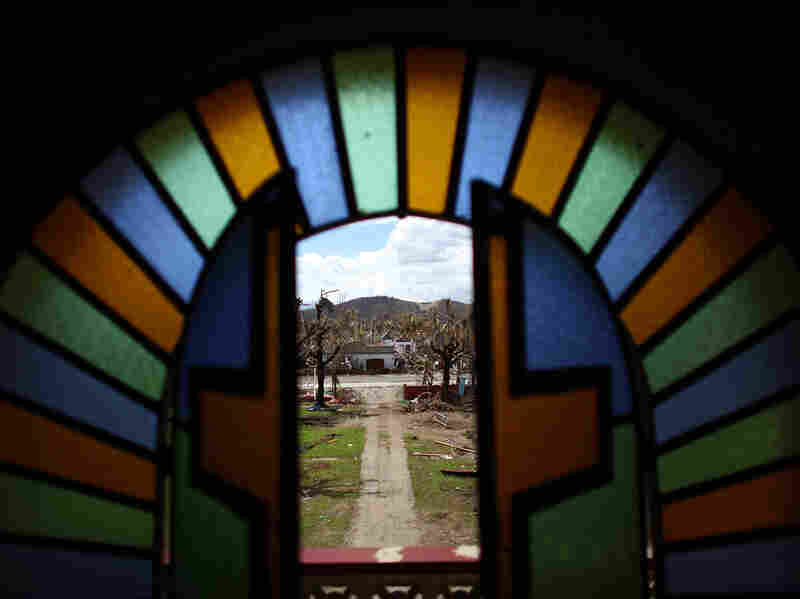 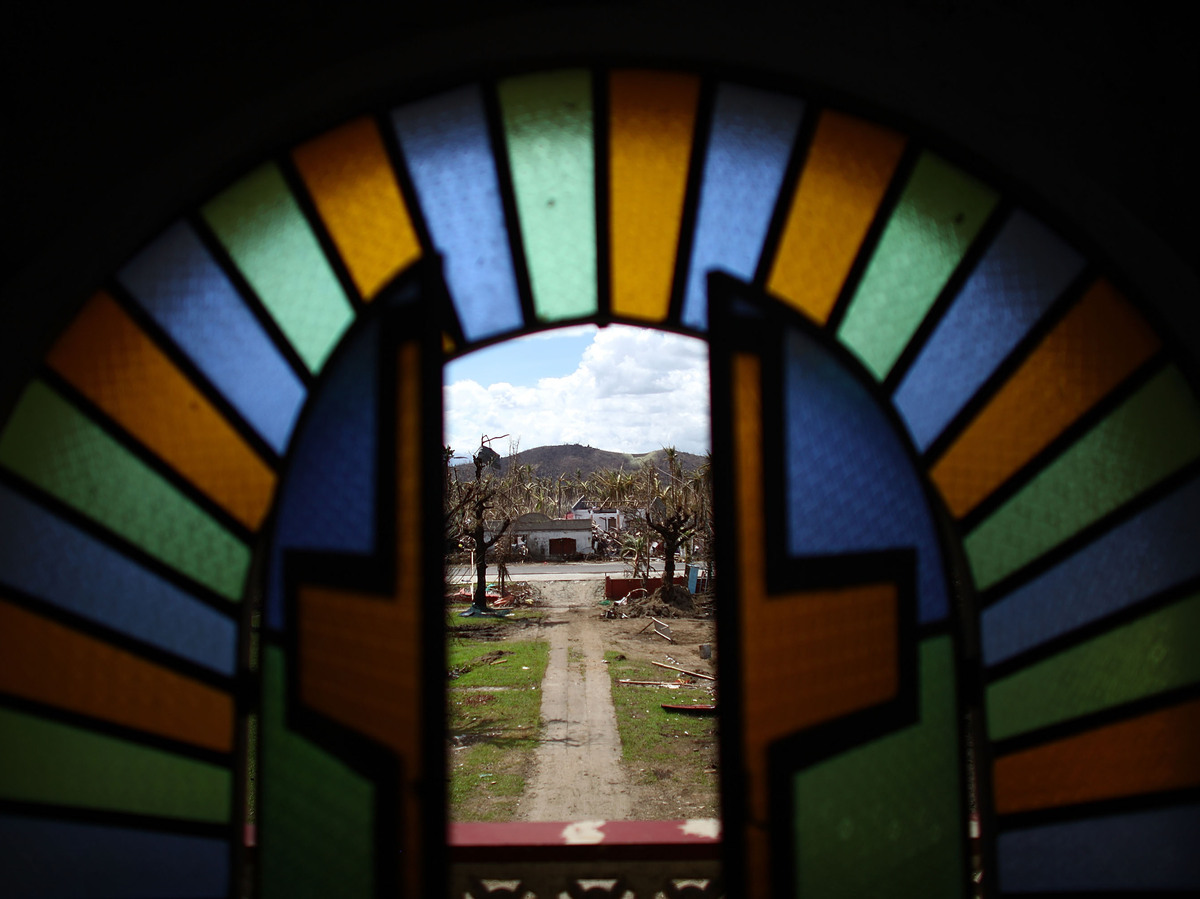 Apurillo rode out Typhoon Haiyan on the second floor of the parish church.

Now, an estimated 400 of his 600 parishioners are no longer present. Some are dead, others are missing or survived and left for somewhere else.

Apurillo says many of those remaining worry that he's going to leave too.

"Whenever they see me walking, they would ask me, 'Father, are you leaving?' " he says. " 'No, I'm not leaving!' I just want to talk to you. If you suffer, I suffer with you; if you laugh, I laugh with you. The experience of one is the experience of all."

The church bell lets out a dissonant clang, signaling the beginning of Mass. Apurillo explains that the bell usually has a deep and sonorous tone, but the storm was so powerful that it knocked the bell out of its belfry and broke it.

The priest celebrates Mass in the damaged church, where shreds of corrugated roofing flap in the breeze.

Providing Aid, Both Material And Spiritual

Before the government could deliver any aid, assistance began to reach San Joaquin Parish through church networks. German aid workers have set up tents outside the church, and the nearby Catholic seminary is full of donated food and clothes.

Jennifer Hardy of Catholic Relief Services says the church has been a crucial institution in helping communities recover from the typhoon, and it's an effective channel for distributing aid.

"Often the church is one of the best record keepers in the community," Hardy says. "So to understand where people are living, what they have lost, which people have left after Typhoon Haiyan hit this area, when they will be coming back, the church can often be one of our best resources for that information."

As he struggles to make sense of the loss his parish has suffered, Apurillo says he feels a huge sense of gratitude for his parishioners.

In a sense, he says, they have converted him, and continually reinforce his sense of his calling as a priest.

"I would experience every week a little conversion, from them and from myself," he says meditatively. "It's not that I do something for them. Actually, it's they doing something for me. You become more prayerful; you become more dedicated as a pastor. That's how I see it."