Accessibility links
Crashing An Afghan Wedding: No Toasts But Lots Of Cheesy Music : Parallels Afghanistan is a poor country with very expensive weddings. There is no alcohol, the sexes are completely segregated, and the families may negotiate over the dowry right up to the last minute. 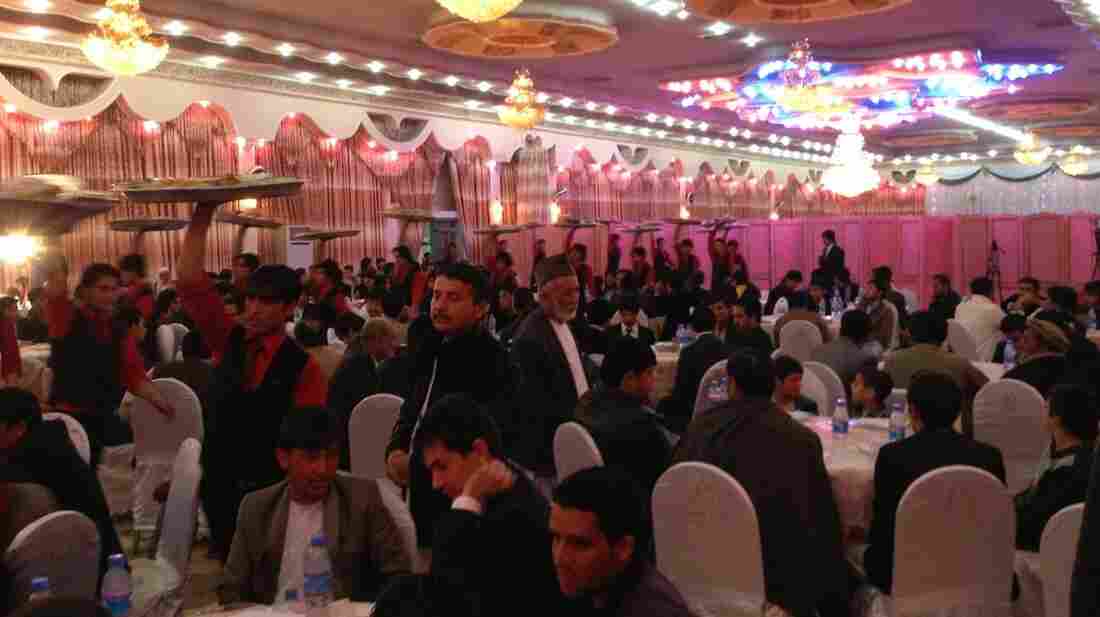 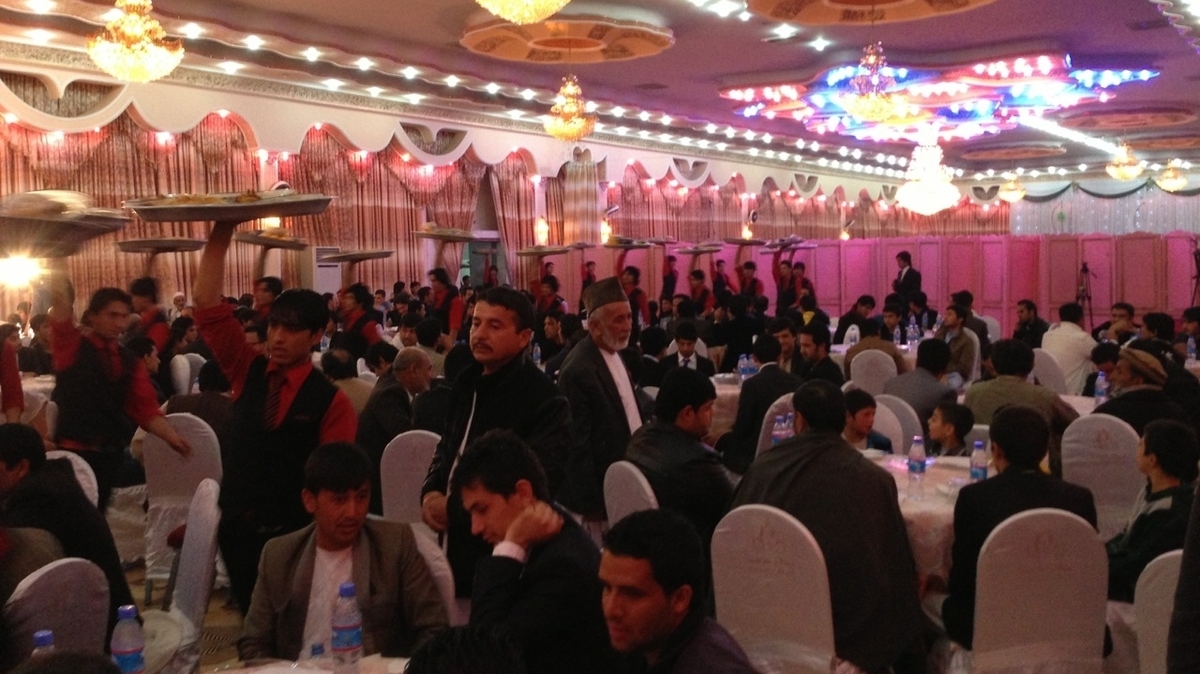 Afghans hold large, expensive weddings, even those involving families of modest means. More than 600 people attended this recent marriage at a large wedding hall in Kabul.

Afghanistan may be one of the world's poorest countries, but weddings are still a big — and expensive — deal. On most weekends, Kabul's glitzy and somewhat garish wedding halls are packed with people celebrating nuptials.

One of them is the Uranos Palace complex. On the night I attended my first Afghan wedding, all three of its halls were overflowing. I was one of two foreigners in a room of about 200 men. The female guests sat on the other side of a 7-foot-high divider in the middle of the hall.

Golden chandeliers dipped down from the 20-foot ceiling, and massive curtains lined the walls of the hall, which had a pinkish hue. Cheap cloth and thick plastic sheets covered the tables. There were empty glass plates and some pitchers of water.

By 8:30 p.m., we had been sitting and waiting for about 30 minutes as men chatted and kids fidgeted, waiting for the ceremony to begin. Eventually, a group of musicians took the stage and began playing music that could be characterized as cheesy, keyboard-driven Afghan pop.

Finally, surrounded by a few close friends and relatives, the groom, Nesar Faizy — the brother of my Afghan producer, Sultan Faizy — walked into the hall.

Nesar was quickly paraded past each table. Then, he and about 20 men circled together in front of the bandstand and danced to a few songs. Afterward, he headed to the other side of the hall to mingle with his bride and her family.

In the meantime, men of all ages sat around the tables waiting for dinner. Most were wearing jeans, a button-down shirt, and a sport coat — the standard fashion for young men in Kabul. My American friend and I were both wearing suits. Sultan laughed and said we looked like senators. 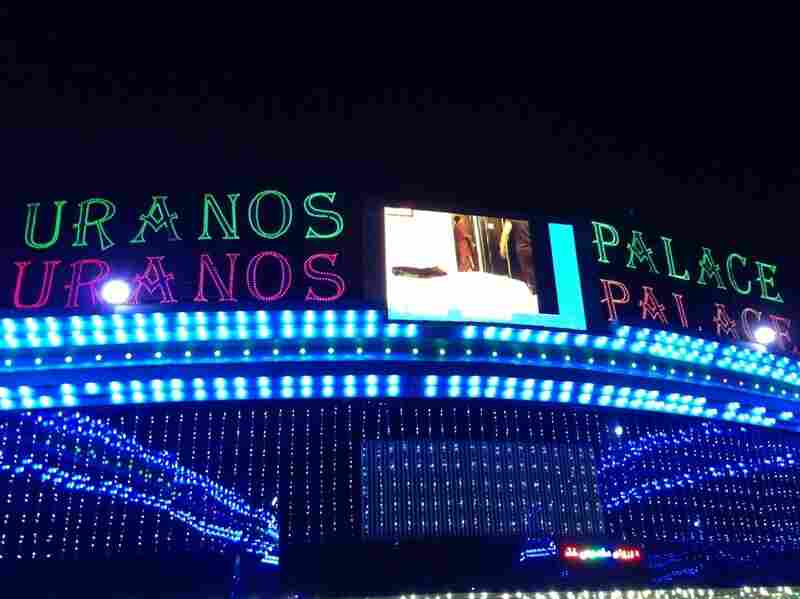 The Uranos Palace is one of several large wedding halls in Kabul. All three of its hall were packed on a recent evening. Sean Carberry/NPR hide caption 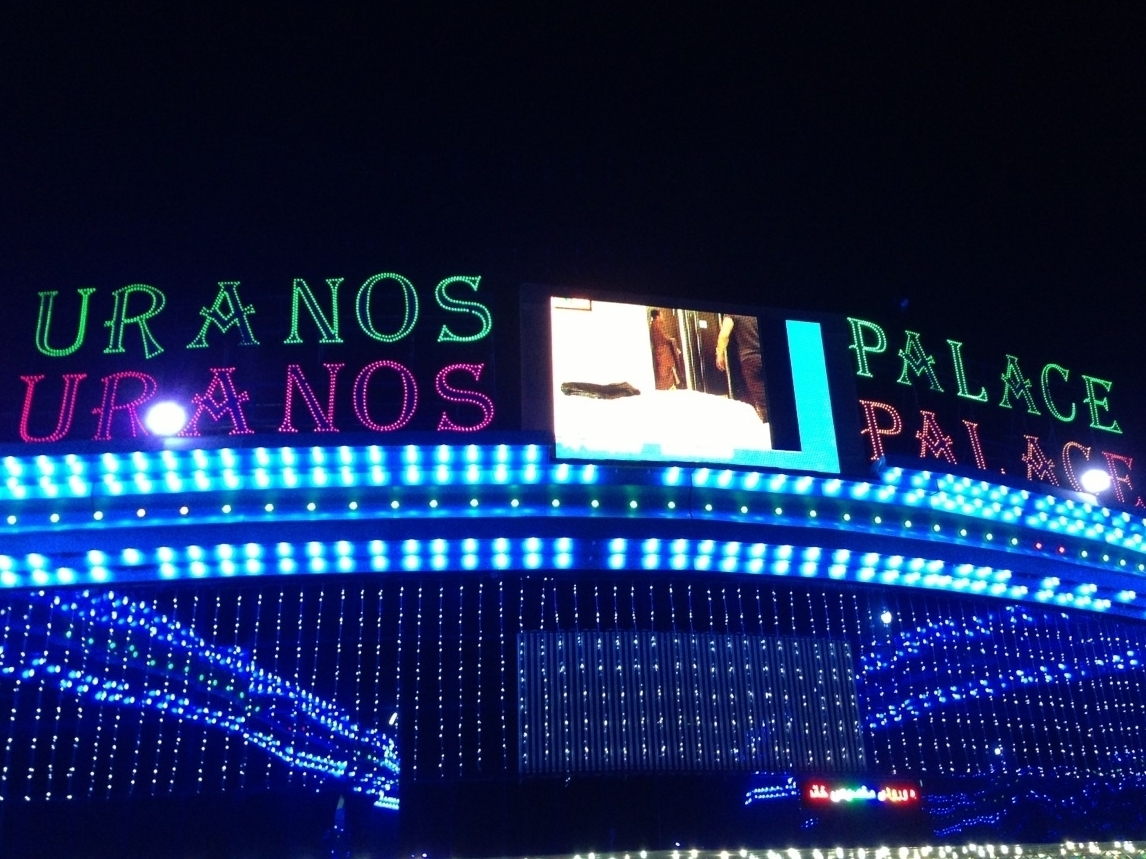 The Uranos Palace is one of several large wedding halls in Kabul. All three of its hall were packed on a recent evening.

No Drinking, No Toasts

At this wedding there was no alcohol, no toasts, a complete separation of the sexes, and the actual ceremony took place in a closed room with the families still negotiating the payment for the bride.

Sultan says that in the Uzbek region of northern Afghanistan where he's from, the traditions are far more liberal.

"They don't care about separating women from men," he said.

There is even alcohol at those ceremonies — though it's illegal for Afghans to drink.

Sultan explains that his brother's wedding was two years and nearly $25,000 in the making. And that doesn't count the $20,000 dowry payment.

"When they got engaged, his in-laws were very happy and they were saying that we are not expecting you to spend lots of money," said Sultan.

But it didn't turn out that way.

During the engagement period, Nesar spent several thousand dollars on gifts like gold and sheep.

Then came the wedding itself. In parts of Afghanistan like Kabul, it's traditional for families to hold three events: first, a pre-wedding party for the women; then the giant wedding party; and last, a smaller party for the bride's family.

"In my province we can actually celebrate the three parties in one night, because people are now understanding that they don't have to spend a lot of money for just a wedding," said Sultan.

Afghan Farmers: Opium Is The Only Way To Make A Living

But that wasn't an option for Nesar, who was marrying a woman from Kabul — a cousin, in fact, in an arranged marriage.

"We [had] to go to our brother-in-laws' tens of times to make them accept and to talk about each single thing," Sultan says.

The bride's family wanted three separate events. So Nesar sold his car and borrowed money to cover the costs, including the wedding party with more than 600 guests.

The pressure for large weddings has become a particular burden on Afghanistan's middle class. It was much different during the reign of the Taliban, from 1996 to 2001. Sultan recalls his sister's wedding back in those days.

"We had a very small party in one of the rooms which was covered with thick curtains, and the doors, everything was locked," he said. "We played music [at a] very low volume, and then had [a little] dancing. That was very risky."

But on this night at the Uranos Palace, the band plays loudly as the waiters bring out platters of food — traditional Afghan rice dishes and roast chicken garnished with potato chips.

After the meal, many guests filter out, while some stay for segregated dancing and one universal wedding custom — complaining about the music.