Accessibility links
Restoring The Mausoleum That Helped Inspire The Taj Mahal : Parallels An imposing 16th century stone tomb for the Mogul emperor Humayun has been restored after six years of work. The mausoleum, which had fallen into disrepair, became India's most ambitious heritage conservation project.

Think Taj Mahal and then try to imagine what came before it. What was the inspiration for that masterpiece?

Archaeologists and architects say a 16th century tomb tucked in the southeast corner of Delhi presaged the jewel of Muslim art in India.

The recent restoration of the mausoleum built to memorialize the Muslim emperor Humayun has created a sensation in the city, drawing sightseers, schoolchildren and history buffs to the site that is now a showcase for India's architectural patrimony.

Empires from the Central Asian Moguls to the British Raj have risen and fallen on the soil of Delhi, and the Indian capital is home to a dizzying array of centuries-old shrines, temples and tombs.

Humayun's Tomb sprawls over two acres and is known as the "Dormitory of the Moguls." Some 160 royal family members, including five Mogul emperors, lie buried in chambers below the monument.

The second Mogul king, Humayun was the son of Babur, the founder of the Mogul dynasty who traced his lineage to Genghis Khan and combined Persian, Mongol and Indian cultures as the Sultanate of Delhi. 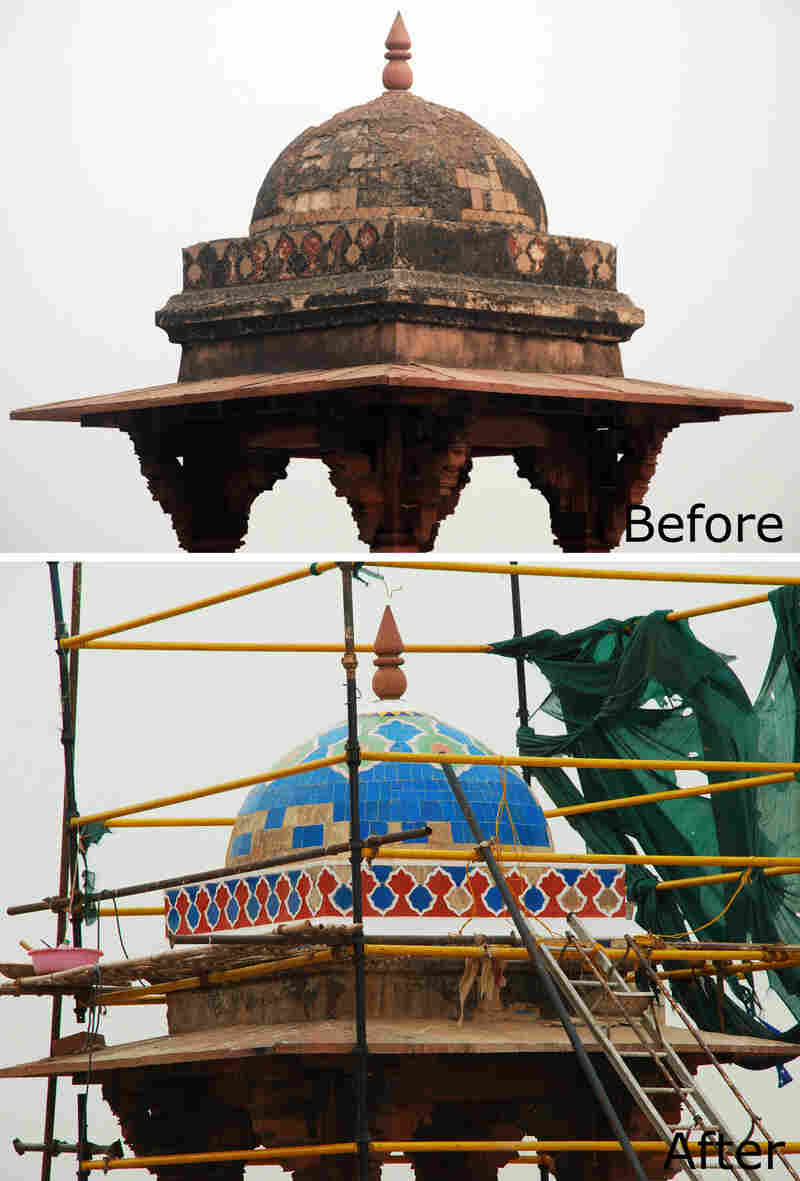 These images show the changes the monument has undergone with the restoration of vibrant tile work. Courtesy of the AKTC hide caption

toggle caption
Courtesy of the AKTC

In addition to being accomplished warriors, the Moguls left a legacy of architectural splendor, building lofty forts, palaces and monuments in their more than 300 years of rule.

In the shadows of the glorious red sandstone and white marble monument, musicians performed ethereal strains of qawwali, the music of Sufi saints, for the unveiling of the restoration back in September. Prime Minister Manmohan Singh, industrial tycoons and Delhi's great and good were on hand to witness the transformation.

Once creeping with vines, the monument is now lavishly restored. Acres of surrounding nurseries on the World Heritage Site are being renovated to create a green space that would rival New York's Central Park.

The Work Of The Aga Khan

It's all thanks to the Aga Khan, the leader of the world's 15 million Ismaili Muslims.

"This Mogul monument, which dates back to 1570, was the first garden tomb complex on the Indian subcontinent. It inspired major architectural innovations culminating in the construction of the Taj Mahal," the Aga Khan said at the unveiling.

An army of stonecutters, masons, plasterers, carpenters, architects and archaeologists have toiled the past six years to refurbish the tomb. Exiled to Persia, Humayun returned to India to rule only briefly before he died in 1556.

His son, the mightiest Mogul, Akbar the Great, commissioned construction of the memorial tomb dedicated to his father, launching a period of lavish building activity that would distinguish the Mogul era. Humayun's great-grandson, Shah Jahan, built the Taj Mahal in memory of his wife, Mumtaz.

Humayun's Tomb looms above a green manicured expanse with walled gardens and whispering waterways — a sanctuary that seems lifted from images on a Persian carpet.

The foundation of the mausoleum is so sturdy that restorers say it has not shifted since the tomb was built nearly 500 years ago. Architect and restoration project director Ratish Nanda says, "It's beautifully built.

Elements Inspired By The Muslim Faith

More than 600 craftsmen set about to do that following the most rigorous rules of restoration. Master craftsmen from as far away as Uzbekistan have painstakingly re-created the original decorative patterns and tiles.

They in turn trained local youths from the nearby neighborhood of Nizamuddin who could carry on the skills. Nanda says 70 to 80 percent of the cost of the restoration went into craftsmen's wages, and nothing was rushed.

"What we've done is we've employed the craftsmen. We've not told them, 'OK, you have to produce this much square feet of stone in so many days.' We've said, 'This is the original — match it.' "

The idea, says Nanda, "is to restore the confidence in the craftsmen that the important thing is not to do work quickly, but to match the work of their forefathers."

The brass lantern that hangs in the central dome was made by craftsmen with the Aga Khan Trust in Cairo.

Standing before a marble cenotaph meant to mark Humayun's burial place, Luis Monreal, the general manager of the Aga Khan Trust for Culture, says the monument represents a kind of "globalization of the world" in the 16th century.

"You will find here a number of formal elements that come from Central Asia, from Iran, elements which are inspired in the Muslim faith," he says.

He points to the six-sided stars and the geometric patterns that proliferate on the monument's facade, because Islam prohibits the image of living beings on its buildings. 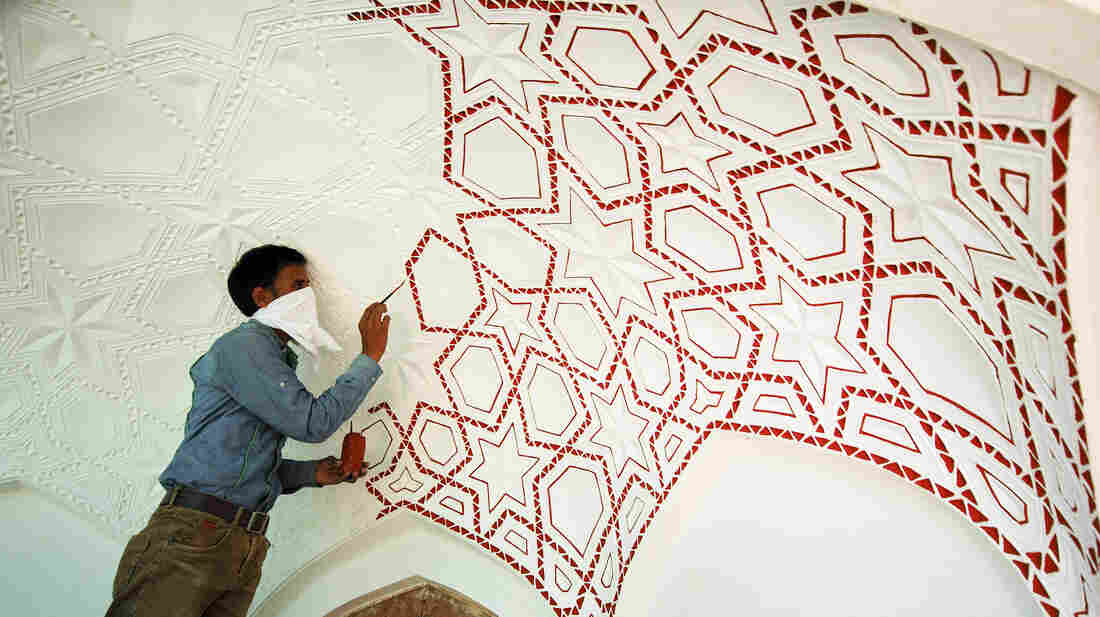 Artisans replicated the original patterns and designs on the monument's ceiling using the same dyes and tools that were used in the 16th century. Courtesy of the AKTC hide caption

toggle caption
Courtesy of the AKTC 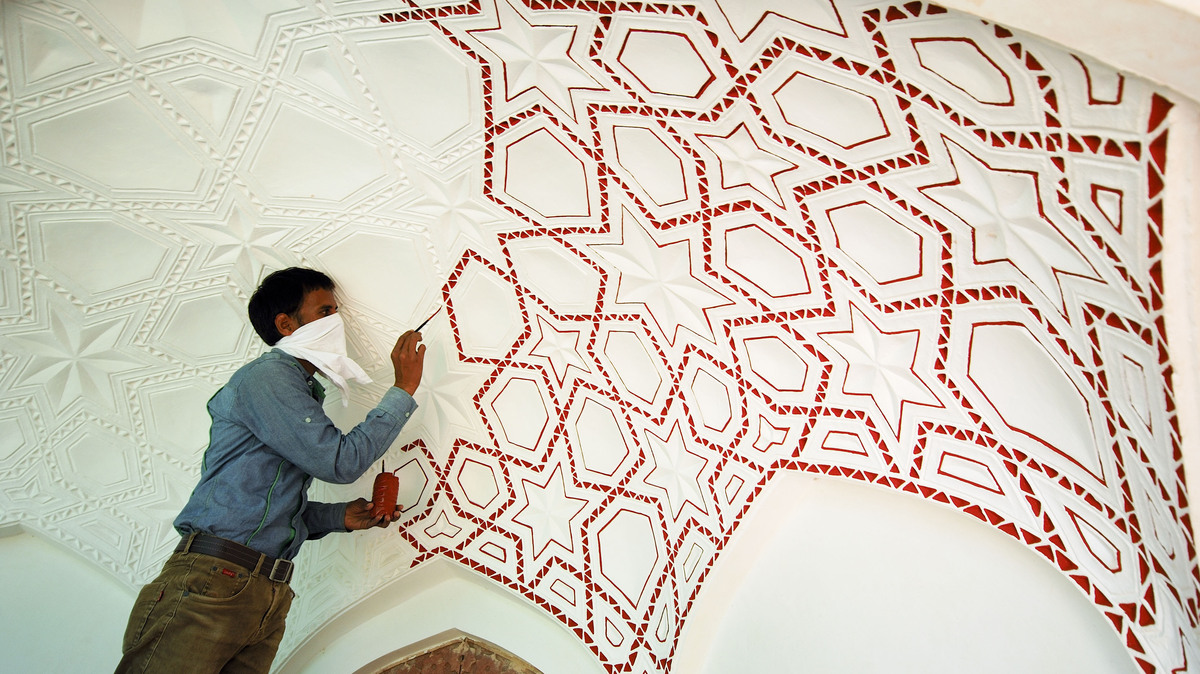 Artisans replicated the original patterns and designs on the monument's ceiling using the same dyes and tools that were used in the 16th century.

There is very little ornamentation on Humayun's tomb. It's as if the building itself is the ornament.

Much of the work by the Agha Khan Trust involved undoing damage caused by earlier restorations. For example, to stop leakage, concrete had been poured on the roof. But it blocked rain pipes, causing more damage.

Using hand tools to minimize vibrations, workers removed 1,000 tons of concrete from the roof in order to restore the original slopes. Nanda says much of the plinth, or platform, on which the building sits was restored by copying a drawing from the 1880s that depicted the entire pattern of stone. 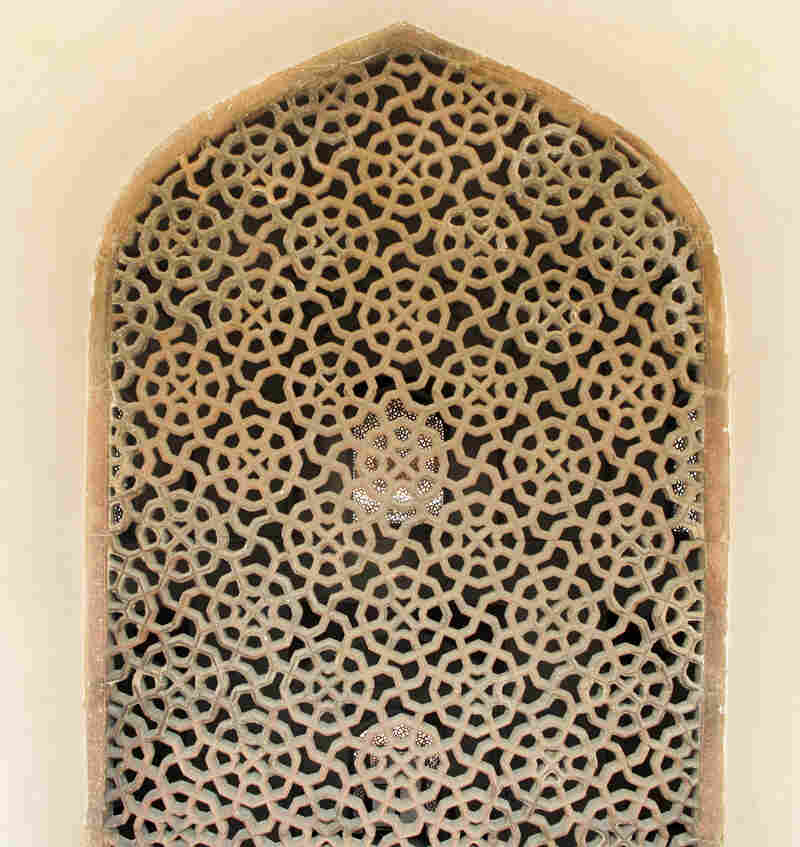 The monument features lattice stone windows arranged on an upper terrace that is reached via a narrow stairway. Julie McCarthy/NPR hide caption 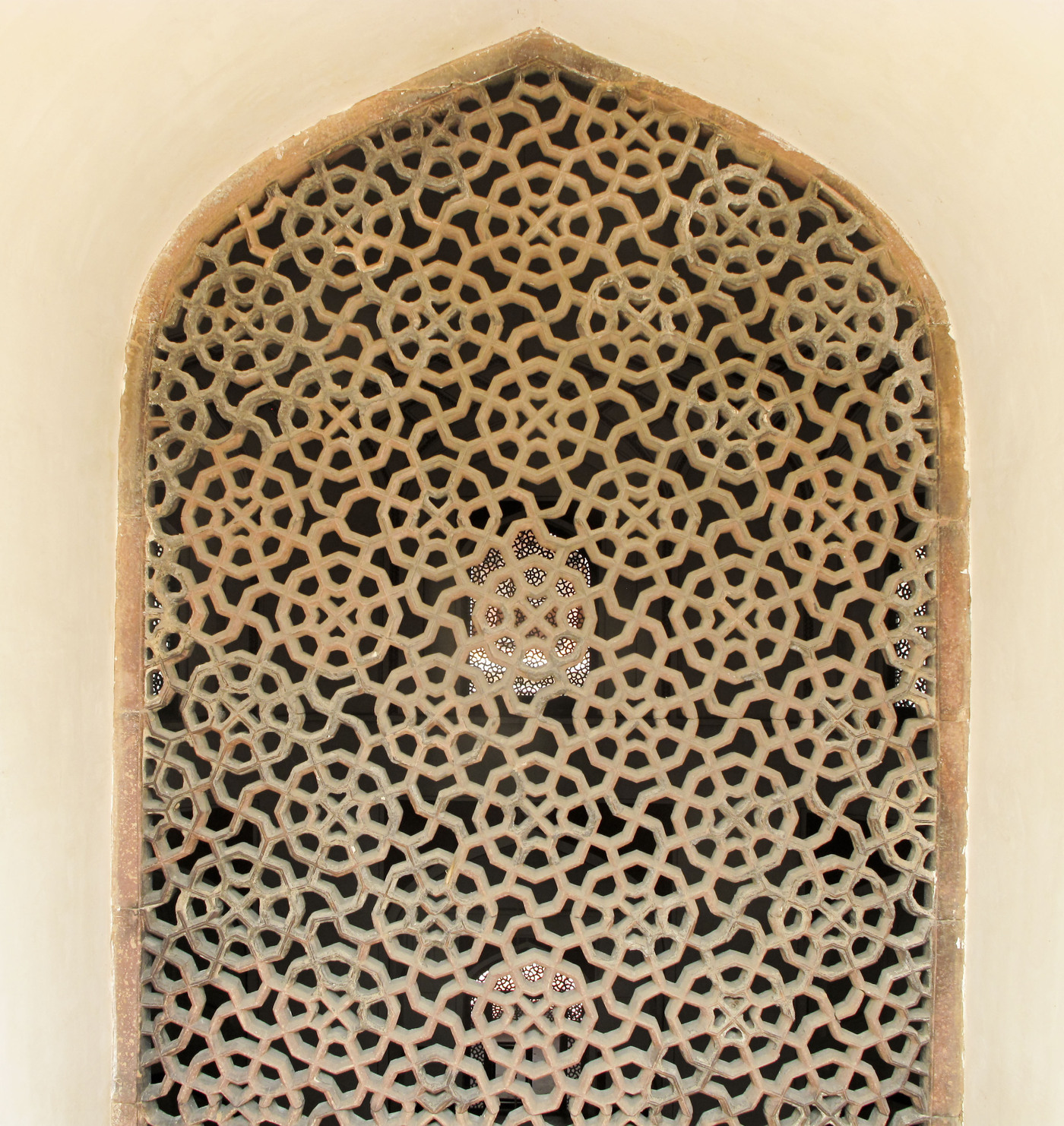 The monument features lattice stone windows arranged on an upper terrace that is reached via a narrow stairway.

"So we were able to judge what has changed since the 1880s, and how to put the stone pattern back," Nanda says. "And if you look at the building, the stone pattern is very critical. It's very precise. It was all part of the original intention to have this precision. For us, what's important is the original Mogul builders' design intentions, and where we have not had it, and there are instances, we have not done anything."

Luck conspired on behalf of the project: The restorers got the stone replacement for a song when the city ripped up Delhi's old streets to lay concrete for the 2010 Commonwealth Games.

"This stone you can't quarry anymore," explains Nanda. "So we were very fortunate that we were able to get the 70 truckloads of stone at throwaway prices before they got wise, and use it on this plinth."

The residents of Nizamuddin and the young men who trained as craftsmen live in the shadow of their forebears' cultural glory, often in ramshackle conditions.

The Aga Khan Trust determined that if its project was to succeed, it had to be an economic asset to the community. So it brought in toilets, health care facilities and jobs.

"At this moment we have over 800 people employed here," says the trust's Luis Monreal. For conservation to be meaningful today, he says it cannot be just about restoring buildings. It must also be about uplifting the lives of those who live around them.