Accessibility links
The High Price Egyptians Pay For Opposing Their Rulers : Parallels Prominent athletes, high school students and young girls have all been punished, and in some cases arrested, for expressing solidarity with protesters who were killed by Egypt's security forces. 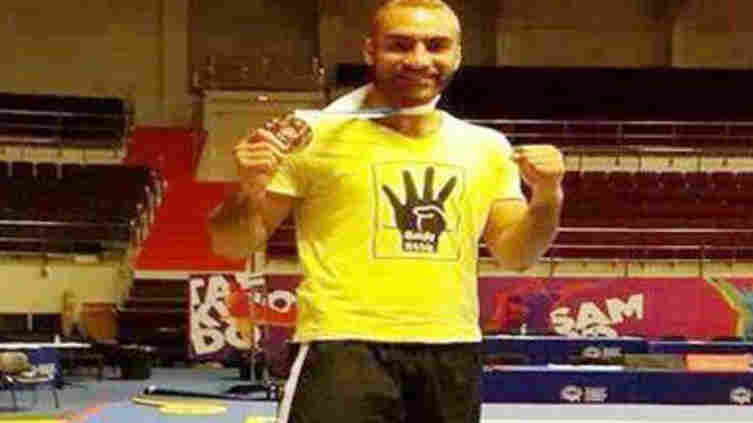 Egypt's Mohamed Yousef won a gold medal at the kung fu championships in Russia in October. He then put on a yellow T-shirt with a four-finger salute to express solidarity with protesters opposing Egypt's military-backed government. Egyptian sports officials have suspended him and barred him from tournaments for a year. Twitter via Al Arabiya News hide caption 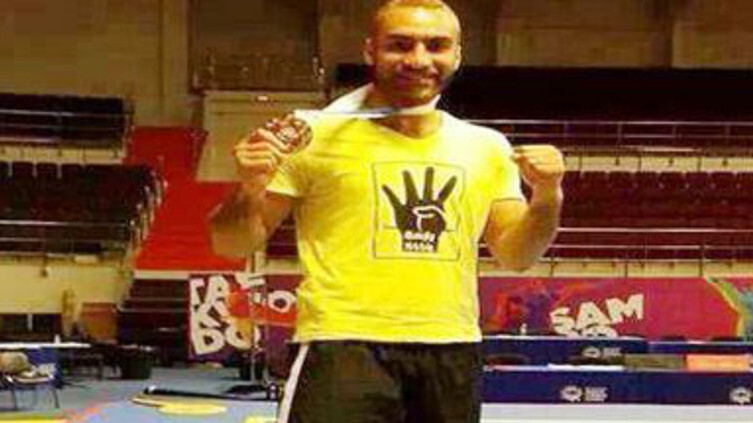 Egypt's Mohamed Yousef won a gold medal at the kung fu championships in Russia in October. He then put on a yellow T-shirt with a four-finger salute to express solidarity with protesters opposing Egypt's military-backed government. Egyptian sports officials have suspended him and barred him from tournaments for a year.

Mohamed Yousef is a tall, handsome practitioner of kung fu. In fact, he's an Egyptian champion who recently won an international competition.

But a month ago, when he collected his gold medal at the championship in Russia, he posed for a picture after putting on a yellow T-shirt with a hand holding up four fingers.

That's the symbol of Rabaa al-Adawiya, the Cairo square where Egyptian security forces opened fire in August on supporters of ousted Islamist President Mohammed Morsi. Hundreds were killed, including seven of Yousef's friends.

"I wanted them with to be there with me," Yousef says. "I wanted them to rejoice when I won the tournament. The least I could do was remember them. They died because they wanted to see Egypt better."

He says the military-backed government is doing everything it can to make people forget.

Yousef paid a price for his decision that day in Russia. He was suspended from the national team, summoned home and barred from representing Egypt in future tournaments for the next year.

Some people in Egypt are calling him a traitor. And his story is not unique.

Many Have Been Punished

There are the young girls in Ismailiya who were arrested and strip-searched just for passing out yellow balloons. A soccer player who was suspended for flashing the four-fingers symbol after scoring a goal. A high school student arrested for having a ruler with that same symbol. The list goes on.

"Any sign of Rabaa al-Adawiya reminds the military of their crime," Yousef says. "It's a sign of solidarity, and when you hold up four fingers, the army won't let it go." 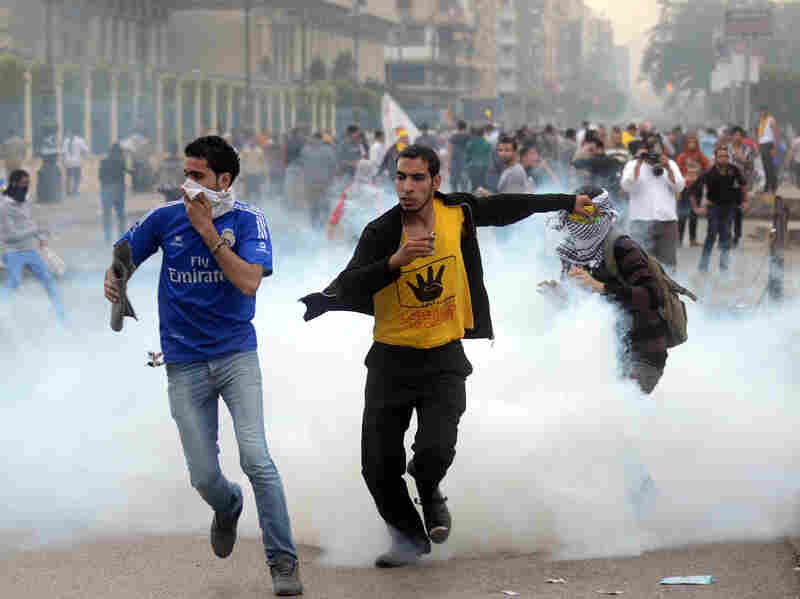 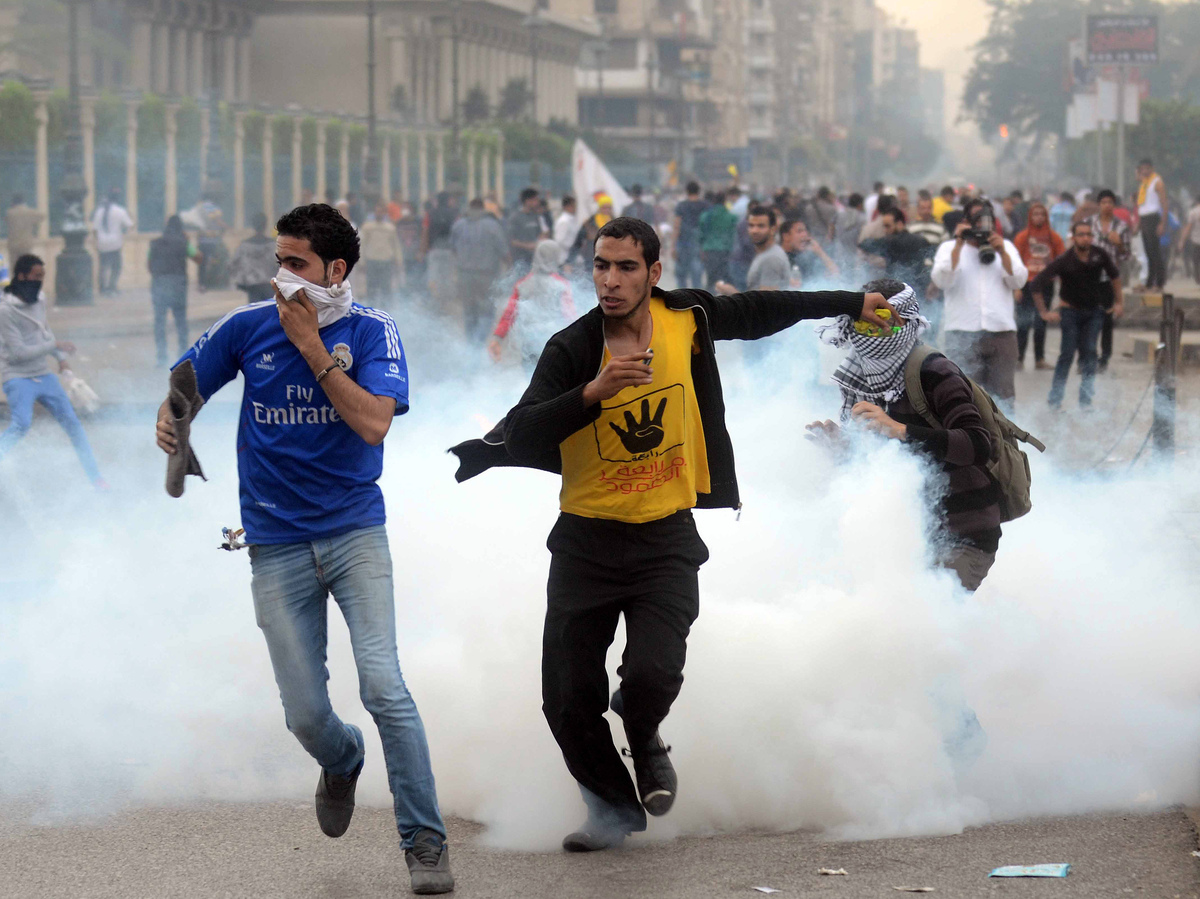 Supporters of the Muslim Brotherhood run from tear gas during clashes with riot police near Cairo's Rabaa al-Adawiya square on Nov. 22.

There is a battle these days over who gets to tell Egypt's recent history — and democracy activists say Egypt's military-backed leaders are quickly trying to rewrite it.

Since the ouster of Hosni Mubarak in 2011, very few security forces have been convicted for killing protesters. And the memories are slowly fading for many Egyptians.

In Cairo's Tahrir Square, the government erected a monument to honor those killed during the uprising against Mubarak. Later that night, the circular brick structure was destroyed, picked apart by angry demonstrators.

Activists say the monument insults their memories and their cause. They say police killed these protesters, the officers weren't held accountable, and now they are being celebrated as heroes.

Cleaning Up The Square

In Rabaa al-Adawiya Square, all signs of the mass killing that took place there on Aug. 14 are gone. The graffiti is painted over. The mosque that was the center of the protest movement is a pristine white again. And a monument has been erected: a ball surrounded by two metal structures that are supposed to represent the police and the army protecting the people.

"There's no acknowledgement of any wrongdoing on the part of the government," says Karim Medhat Ennarah, a criminal justice researcher at the Egyptian Initiative for Personal Rights.

He says police brutality has steadily gotten worse over the past three years of transition. And now, after so many Egyptians turned on the Muslim Brotherhood over its poor leadership, the police are no longer public enemy No. 1 — and the security forces, along with the military, feel emboldened.

Every government before did the same — Mubarak's regime, the military leadership, Morsi. But this time, Ennarah says, the military-backed leaders have enough public support to control the story.

Muslim Brotherhood supporters have been protesting for months. More than a thousand are dead, and thousands more have been detained. Now the government calls the brotherhood "terrorists," and says that they are trying to destabilize the state and must be crushed. The crackdown is widening to secular and leftist political activists angry over a protest law that suppresses dissent.

One of the most shocking cases recently occurred in the Mediterranean port of Alexandria.

Bishr Mohamed's daughter Sumaya is just 18. Last week she was sentenced to 11 years and one month in prison along with 13 other young women. Why?

Because, her father says, she was near a peaceful protest where demonstrators carried the yellow poster that symbolizes the mass killing of brotherhood supporters, and passed out yellow balloons.

She was convicted of joining a terrorist organization and inciting violence. On the day she was convicted, she stood in the prosecution cage with other young women, the youngest just 14.

Before her arrest on Oct. 31, she'd never spent the night outside her father's home.

It took days to get access to Sumaya, her dad says. At one point, he was arrested as he tried to see her. When he finally did, she asked him, "Are you proud of me?"

"I said, 'Yes, of course,' " Mohamed says. "I was surprised the girls themselves were steadfast and strong. I told Sumaya, 'Be strong. You have a cause.' "

"It's like having the person who kills you attend your funeral," he says.