Accessibility links
U.S. Military Lingo: The (Almost) Definitive Guide : Parallels What's a fobbit? How about rumint? And then there's a self-licking ice cream cone. A dozen years of war in Afghanistan and Iraq have spawned a whole new military vocabulary. 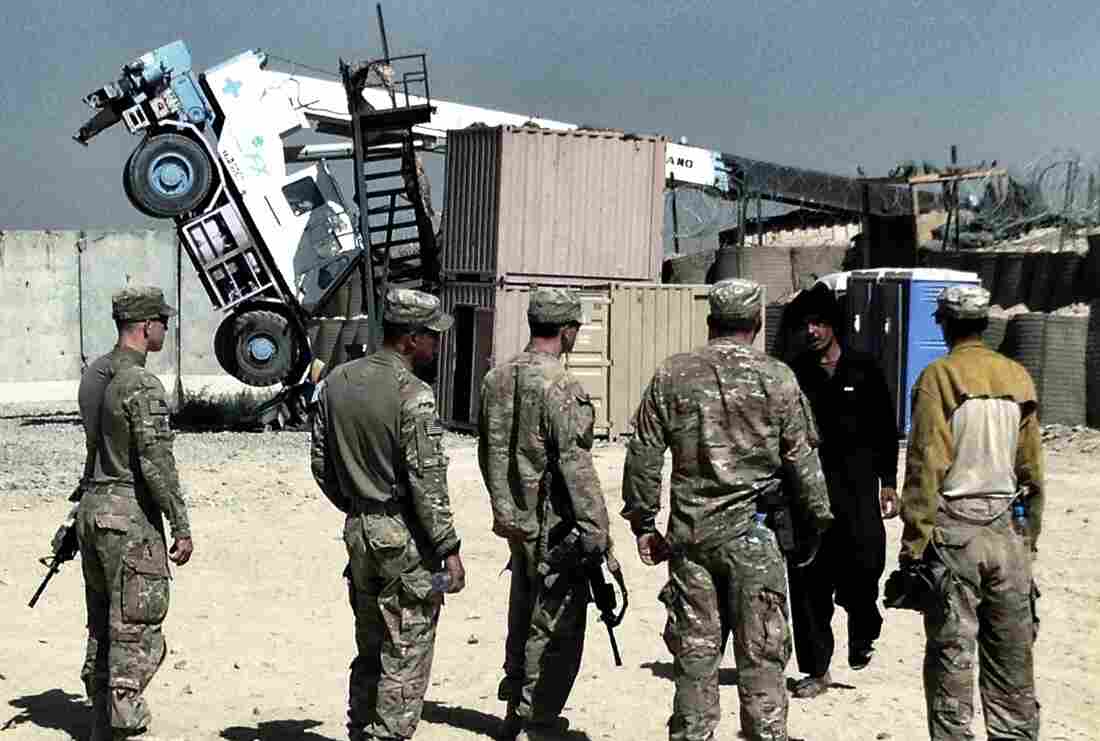 U.S. soldiers look at a crane that tipped over while trying to move a CHU, or Containerized Housing Unit, at a small COP, or Combat Outpost, in southern Afghanistan. A dozen years of war in Iraq and Afghanistan have created a whole new military vocabulary. David Gilkey/NPR hide caption 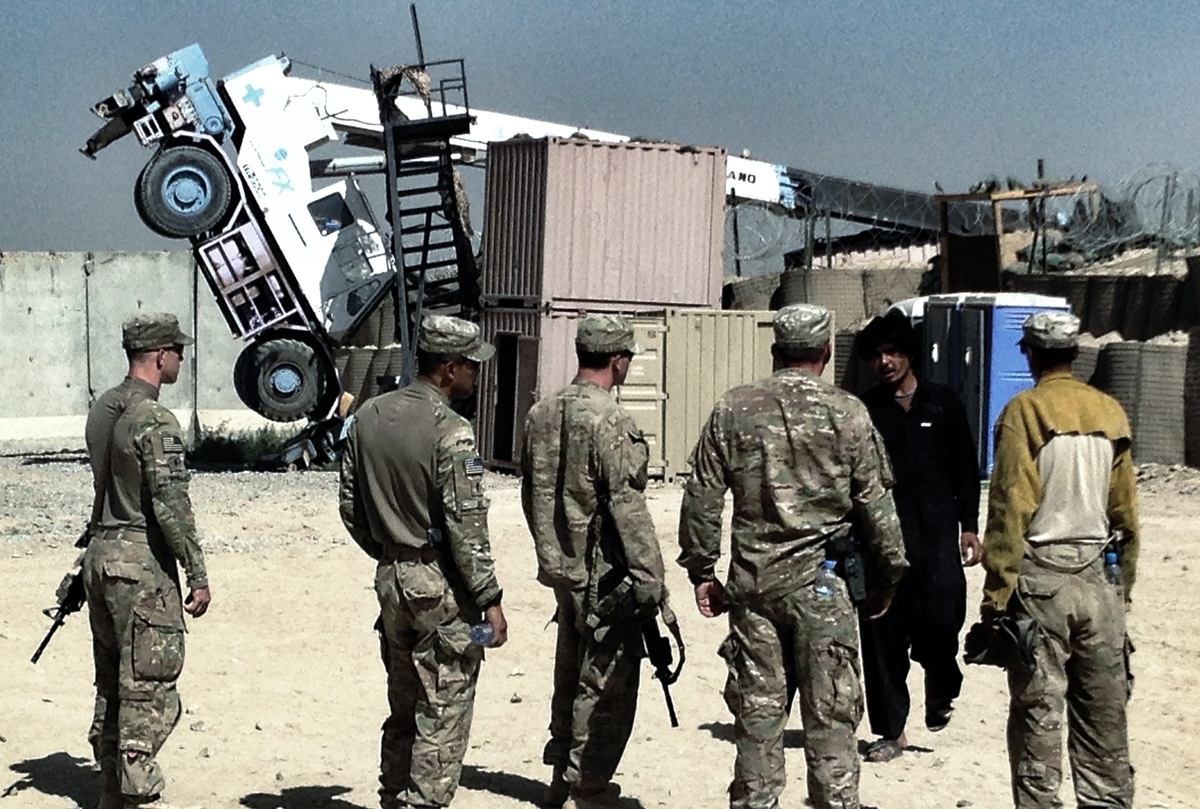 U.S. soldiers look at a crane that tipped over while trying to move a CHU, or Containerized Housing Unit, at a small COP, or Combat Outpost, in southern Afghanistan. A dozen years of war in Iraq and Afghanistan have created a whole new military vocabulary.

It's painful for U.S. soldiers to hear discussions and watch movies about modern wars when the dialogue is full of obsolete slang, like "chopper" and "GI."

Slang changes with the times, and the military is no different. Soldiers fighting the wars in Iraq and Afghanistan have developed an expansive new military vocabulary, taking elements from popular culture as well as the doublespeak of the military industrial complex.

The U.S. military drawdown in Afghanistan — which is underway but still awaiting the outcome of a proposed bilateral security agreement — is often referred to by soldiers as "the retrograde," which is an old military euphemism for retreat. Of course the U.S. military never "retreats" — rather it conducts a "tactical retrograde."

This list is by no means exhaustive (a few phrases were too salty for publishing). And some of the terms originated prior to the wars in Afghanistan and Iraq. But these terms are critical to speaking the current language of soldiers, and understanding it when they speak to others. 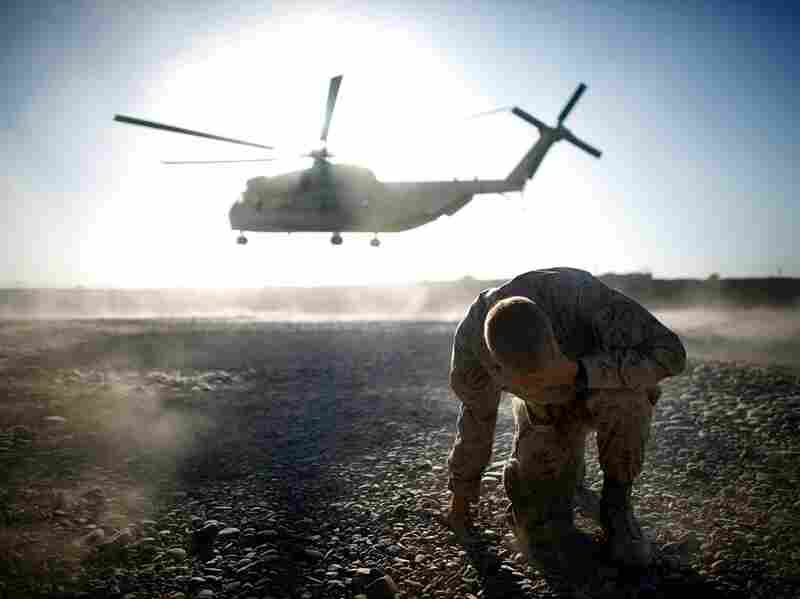 A U.S. military helicopter takes off in southern Afghanistan. They may still be called "choppers" in the movies, but troops universally refer to them as "birds." David Gilkey/NPR hide caption 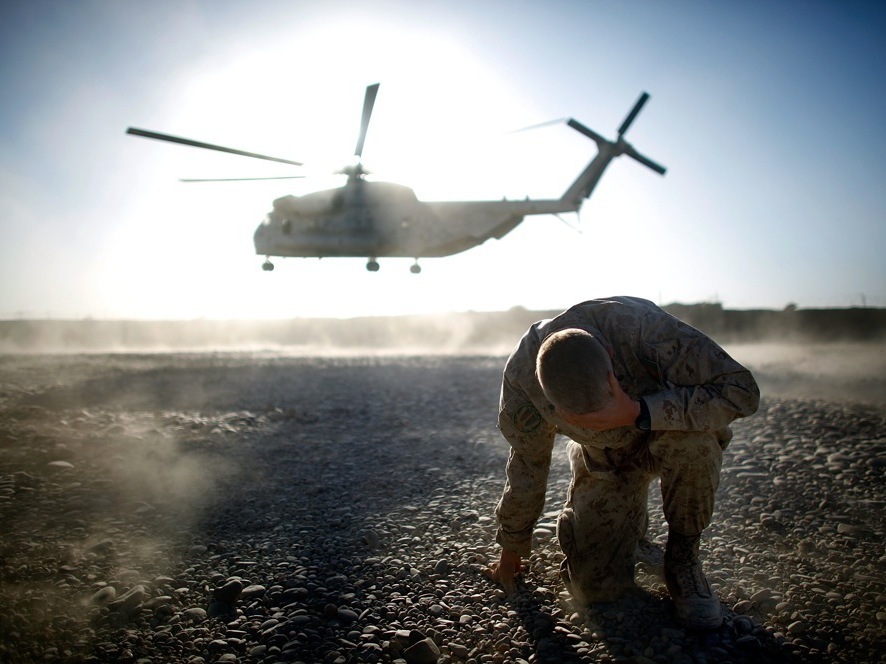 A U.S. military helicopter takes off in southern Afghanistan. They may still be called "choppers" in the movies, but troops universally refer to them as "birds."

Bird: Helicopter. "Chopper" is rarely used, except in movies, where it is always used. A chopper is a kind of motorcycle, not an aircraft.

Blowed up: Hit by an IED. Example: "I been blowed up six times this year."

CHU: (pronounced choo) Containerized Housing Unit. These small, climate-controlled trailers usually sleep between two and eight soldiers and is the primary unit of housing on larger bases. A CHU Farm is a large number of CHUs together. A Wet CHU is a CHU that has its own bathroom, usually reserved for generals and other high-ranking individuals. CHUs are unarmored and very vulnerable to rocket attacks.

COP: Combat Outpost. A small base, usually housing between 40 and 150 soldiers, often in a particularly hostile area. Life at a COP is often austere and demanding, with every soldier responsible for both guard duty and patrolling.

DFAC: (pronounced dee-fack) Dining Facility, aka Chow Hall. Where soldiers eat. At larger bases the meals are served by contracted employees, often from Bangladesh or India. These employees are called TCNs, or Third-Country Nationals.

Dustoff: Medical evacuation by helicopter. For example, "dustoff inbound" means that a medevac helicopter is on the way.

FOB: Forward Operating Base. Bigger than a COP, smaller than a superbase. A FOB can be austere and dangerous, but is more commonly provisioned with hot, varied meals, hot water for showers and laundry, as well as recreational facilities.

Fobbit: Combination of FOB and Hobbit. Derogatory term for soldiers who do not patrol outside the FOB.

Geardo: (rhymes with weirdo) A soldier who spends an inordinate amount of their personal money to buy fancy military gear, such as weapon lights, GPS watches, custom rucksacks, etc. Generally refers to a soldier with little tactical need for such equipment. See: Fobbit.

Green Bean: A civilian-run coffee shop common on larger bases in Iraq and Afghanistan, often the locus of the base social scene, such as it is.

Green Zone: In Iraq, the heavily fortified area of central Baghdad where most government facilities are located. In southern Afghanistan, refers to the lush, densely vegetated areas following rivers that Taliban fighters defend vigorously. As opposed to the Brown Zone, which refers to the more barren mountains.

Groundhog Day: From the Bill Murray movie, the phrase is used to describe deployments where every day proceeds the same way, no matter how the individual tries to change it.

Gun: A mortar tube or artillery piece. Never used to refer to a rifle or pistol. Military-issued pistols are usually called 9-mils.

Hajji: A derogatory term for Iraqis, used widely during the Iraq War. A Hajii Shop was an Iraqi-run shop on the base, often selling pirated DVDs, or Hajii Discs. Rarely used to describe Afghans.

IED: Improvised Explosive Device. The signature weapon of the insurgencies in Iraq and Afghanistan, IEDs are low-cost bombs that can be modified to exploit specific vulnerabilities of an enemy. They range in size from a soda can to a tractor trailer and are initiated by anything from a pressure sensor to a suicidal attacker.

Inside/Outside The Wire: Describes whether you are on or off a base.

Kinetic: Violent. Example: The Pech Valley is one of the most kinetic areas in Afghanistan.

Moon Dust: The powdery, flour-like dust that covers everything in southern Afghanistan and much of Iraq.

OPTEMPO: Operational Tempo, high or low. Describes the pace at which a soldier works, whether that work is combat patrols, making PowerPoint slides or training.

Oxygen Thief: A useless soldier, or one who loves to hear himself or herself talk.

POO: Point Of Origin. The site from which a rocket or mortar was launched at U.S. forces. Most easily calculated by tracking the projectile's trajectory with radar. Example: "We're going out POO hunting."

Powerpoint Ranger: A soldier who is tasked primarily with building PowerPoint presentations for commanders' briefings.

Rack Out: Go to sleep.

Ranger Pudding: A field-expedient Nilla Wafer made from MRE ingredients. Mix a paste of creamer, sugar and water, apply to a cracker. A chocolate version is possible if cocoa powder is available.

Rumint: A combination of rumor and intelligence. Gossip, scuttlebutt.

Self-Licking Ice Cream Cone: A military doctrine or political process that appears to exist in order to justify its own existence, often producing irrelevant indicators of its own success. For example, continually releasing figures on the amount of Taliban weapons seized, as if there were a finite supply of such weapons. While seizing the weapons, soldiers raid Afghan villages, enraging the residents and legitimizing the Taliban's cause.

Speedball: A body bag filled with supplies, usually ammunition and bottled water, dropped from a plane or helicopter to resupply soldiers far afield or in dire need.

Squirter: A person, assumed to be an enemy, running away from a military attack.

Superbase: The only bases that fall into this category right now are Kandahar Airfield and Bagram Airfield in Afghanistan. They are built around supporting the regional military commands, and are logistical hubs for forces in the area. Soldiers stationed at these bases have access to the most comfortable living quarters, the most variety in food, shopping and socializing. For example, Kandahar Airfield has a weekly "Salsa Night" dance party near the TGI Friday's.

Tango Mike: Thanks Much.

Terp: An interpreter, usually a local Afghan or Iraqi hired by the military to translate for military personnel when they are communicating with a local. This abbreviation is considered somewhat rude.

TIC: (pronounced tick) Troops In Contact. Usually means a firefight, but can refer to an IED or suicide attack.

Whiskey Tango Foxtrot: What The F#@&, Over.

Willy Pete: White Phosphorus. Delivered by mortar or artillery, this substance burns extremely hot and generates a lot of light. It is only supposed to be used for illumination, as it should be considered a chemical weapon if used against people.

Woobie: Properly called a poncho liner, this lightly insulated blanket is usually issued to soldiers in basic training. The name references the attachment a baby forms with its blanket.