Accessibility links
Nelson Mandela And The Virtue Of Compromise : Parallels Most revolutionary political figures consider compromise a dirty word and a sign of weakness. Yet Mandela consistently preached pragmatism, and many of his defining moments involved acts of flexibility, reconciliation and magnanimity.

Nelson Mandela And The Virtue Of Compromise

Nelson Mandela And The Virtue Of Compromise 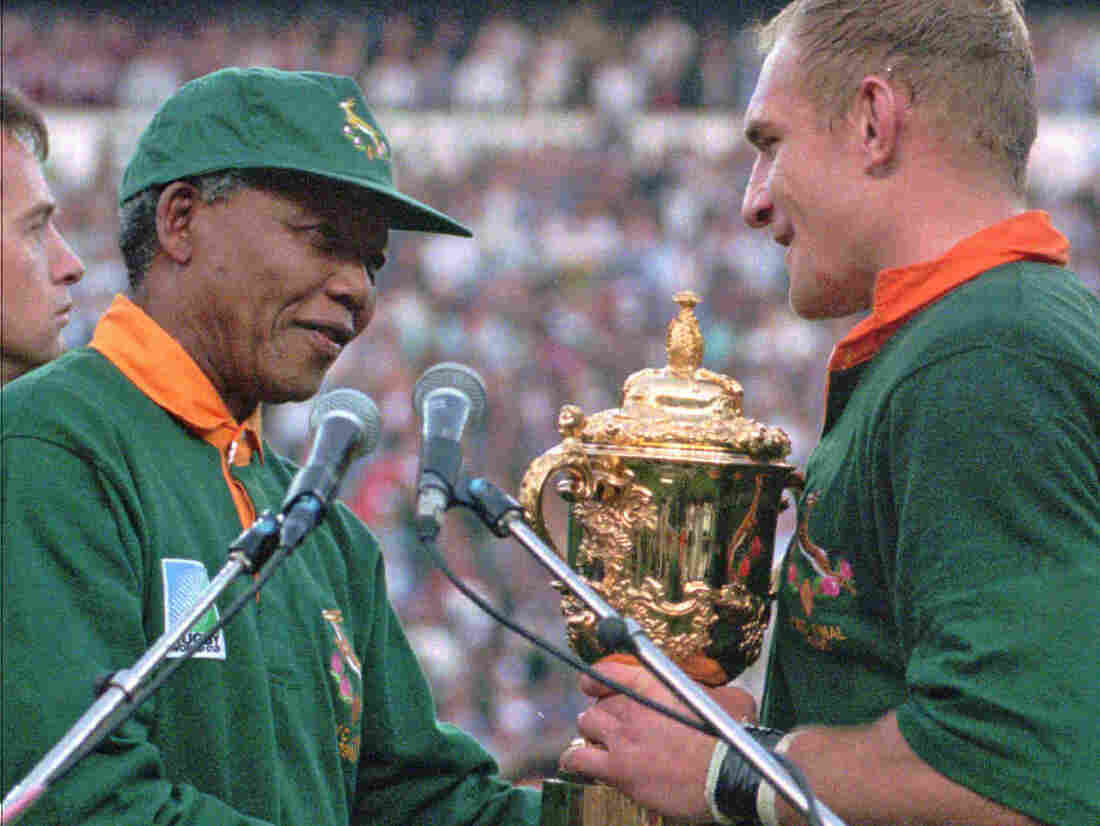 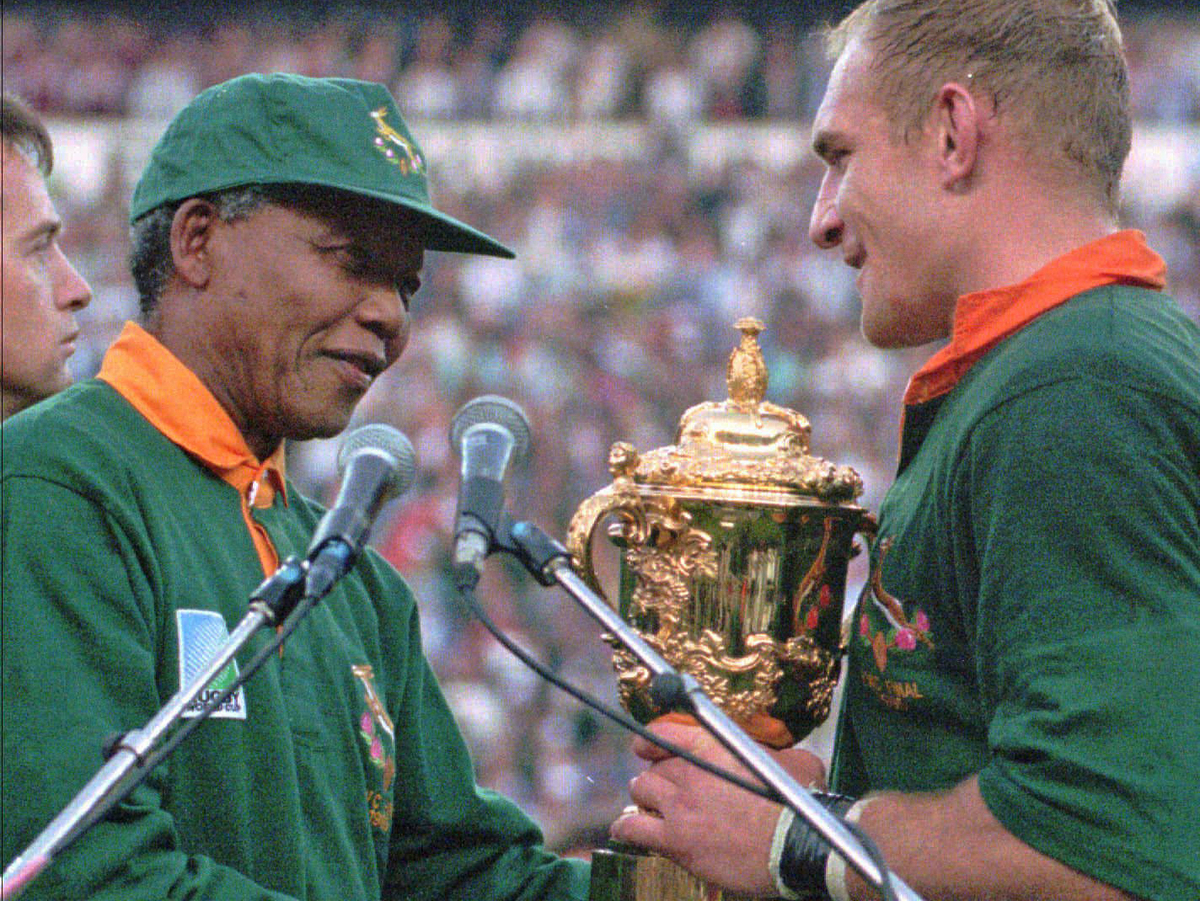 The same scene played out repeatedly at political rallies in South Africa's dusty black townships two decades ago: Nelson Mandela's then-wife, Winnie, would electrify the crowd by lashing out at the white government. She would fire up the young men with her heated rhetoric, tapping into their grievances and leading them into frenzied chants and songs of liberation.

After her powerful warm-up act, her sober and lawyerly husband would step to the microphone and detail the state of the negotiations with the white rulers. He would patiently stress the need to exercise self-control and follow the guidelines and practices established by his movement, the African National Congress.

She was a bonfire. He was the principal on the first day of school, telling students everything they couldn't do.

Nelson Mandela will always be remembered for his iron will, symbolized by the 27 years in prison that only made him stronger. Yet throughout his life, from liberation fighter to prisoner to president to elder statesman, many of his defining moments involved acts of compromise, pragmatism and reconciliation.

Mandela's closest friends and toughest rivals all agreed he could be tough, autocratic and stubborn. By one count, the white government offered to release him from prison six times, always with conditions attached, and Mandela refused every time.

"I cherish my own freedom dearly, but I care even more for your freedom," Mandela said on one such occasion. In 1990, he was released unconditionally.

Winning Over His Oppressor

Revolutionary figures tend to be firebrands who are doctrinaire and single-minded, regarding compromise as a dirty word and a sign of weakness. Yet Mandela consistently displayed flexibility and magnanimity, using it skillfully to get his way and to keep South Africa from sliding toward the abyss of racial conflict.

In prison, Mandela and his colleagues learned Afrikaans, the language of the oppressor, and assiduously cultivated their white wardens for more than a quarter century. In the early years at the Robben Island prison, Mandela faced endless abuse and humiliations. But ultimately he won them over. In the final years, the wardens treated Mandela as if they were his loyal bodyguards.

Mandela said after his release that this taught him the power of persuasion and negotiation, an approach he would follow repeatedly to win over a skeptical white minority.

When Mandela was behind bars, many whites regarded him as a radical and a terrorist. He had received his life sentence for launching the armed struggle against apartheid, though it amounted mostly to a low-level sabotage campaign.

When released from prison, he did not renounce armed struggle, viewing it as a way to keep pressure on the government. Yet he also refused to endorse the younger, more aggressive blacks, who wanted a full-fledged battle with the white government and its powerful security forces.

"We can't win a war, but we can win an election," Mandela said.

This reflected Mandela's shrewd pragmatism about how best to advance the cause of black political rights. It often meant tempering emotions, and it was an acquired trait, as he noted in his autobiography, The Long Walk To Freedom.

"I was angry at the white man, not at racism," Mandela wrote of his feelings as a younger man. "While I was not prepared to hurl the white man into the sea, I would have been perfectly happy if he climbed aboard his steamships and left the continent of his own volition." 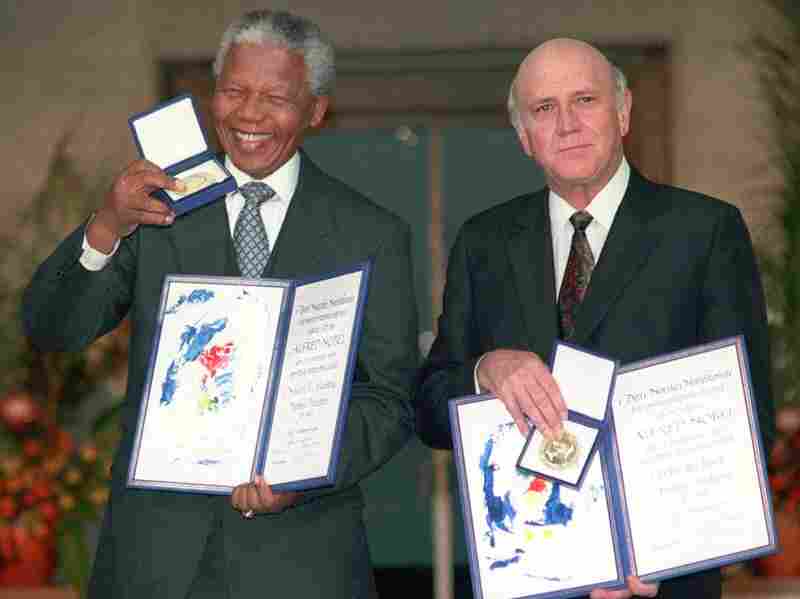 Though there was no warmth between them, Nelson Mandela and President F.W. de Klerk understood they needed to work together. Their careful collaboration led them to share the Nobel Peace Prize in 1993. Jon Eeg/AP hide caption 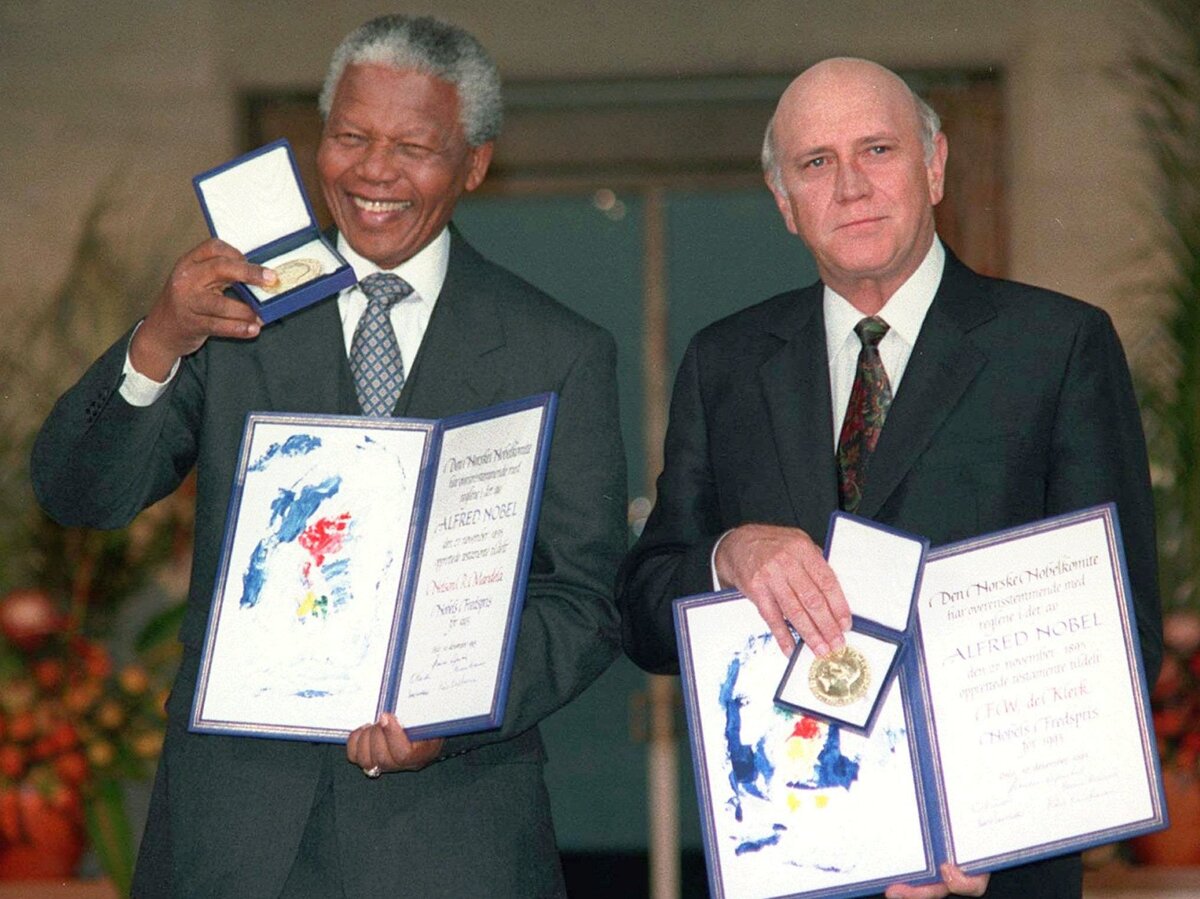 Though there was no warmth between them, Nelson Mandela and President F.W. de Klerk understood they needed to work together. Their careful collaboration led them to share the Nobel Peace Prize in 1993.

Blacks And Whites, Bound Together

His position later shifted. In the internal debate among blacks, Mandela opposed black nationalists who said whites didn't belong in South Africa. Instead, he stressed a multiracial society in which whites were not only welcome, but necessary to the country's success.

As he reached out to whites, Mandela had to fend off criticism from many younger activists. His former wife Winnie was, at times, one of his harshest critics, accusing him of appeasing whites at the expense of blacks.

Mandela negotiated with President F.W. de Klerk for four rocky years as they forged the grand bargain that buried apartheid and created what has become the most respected democratic system on the continent.

There was no warmth between them, yet they both understood they needed each other to bring about the historic transformation. For the most part, they kept their recriminations in check, though they would periodically snipe at each other, even as they shared the Nobel Peace Prize in 1993.

Mandela's African National Congress won the first all-race elections in a landslide in 1994. But under the deal negotiated with de Klerk, the government would be made up of a coalition that gave smaller parties prominent representation.

How Mandela Expanded The Art Of The Possible

The Mandela Playlist: A Life And Legacy, Told In Music

This meant that Mandela's cabinet included not only de Klerk and his white party, but also Mandela's main black rival, Magosuthu Buthelezi, whose Zulu Inkatha party had waged bloody battles with the ANC, leaving thousands dead. This required many delicate negotiations, but it kept the country together at a fragile moment.

Mandela was always looking for ways to reach out to groups that were not his allies. One of the most memorable was in the 1995 rugby World Cup in South Africa.

The sport was dominated by whites, and Afrikaners in particular. But Mandela went to the stadium in Johannesburg and put on the green jersey of the national team, the Springboks, before the championship match with New Zealand. The crowd of 80,000 was overwhelmingly white. Yet they erupted with chants of "Nel-son, Nel-son," as he toured the grounds.

Nelson's graceful exit from the political spotlight is sometimes overlooked. After one five-year term, Mandela voluntarily stepped down from the presidency in 1999, though he could have served a second term. It was an extraordinary act on a continent where many leaders expect to rule for life, and often do.

Mandela spent his long life fighting against the white monopoly on power, and once he succeeded, he set the precedent that he was a steward of power in a multiracial South Africa, not its sole owner.