Accessibility links
A Boxing Champ Rises In Ukraine's Bare-Knuckle World Of Politics : Parallels Vitali Klitschko has emerged as one of Ukraine's most popular opposition figures, in part because he earned his wealth in the ring and appears to be untouched by the country's corruption scandals. The boxer known as "Dr. Ironfist" has his eye on the presidency, but there are concerns about his lack of experience. 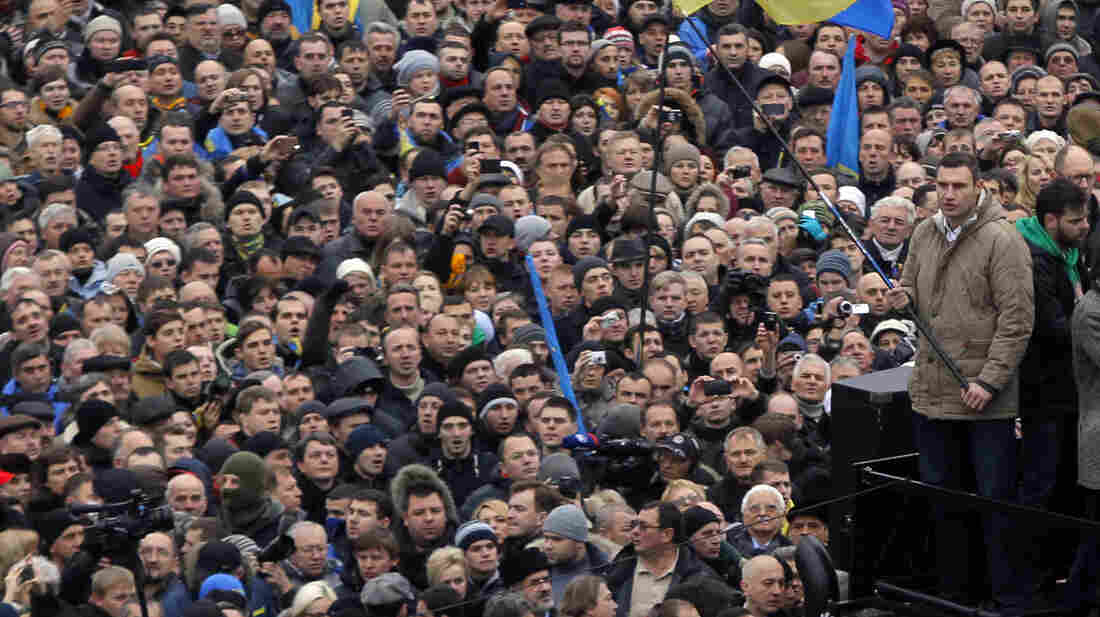 Vitali Klitschko, head of the opposition UDAR party, waves a flag during a rally in downtown Kiev, Ukraine, on Dec. 1. The WBC heavyweight boxing champion has emerged as one of Ukraine's most popular political figures, as massive anti-government protests grip the country. Sergei Grits/AP hide caption 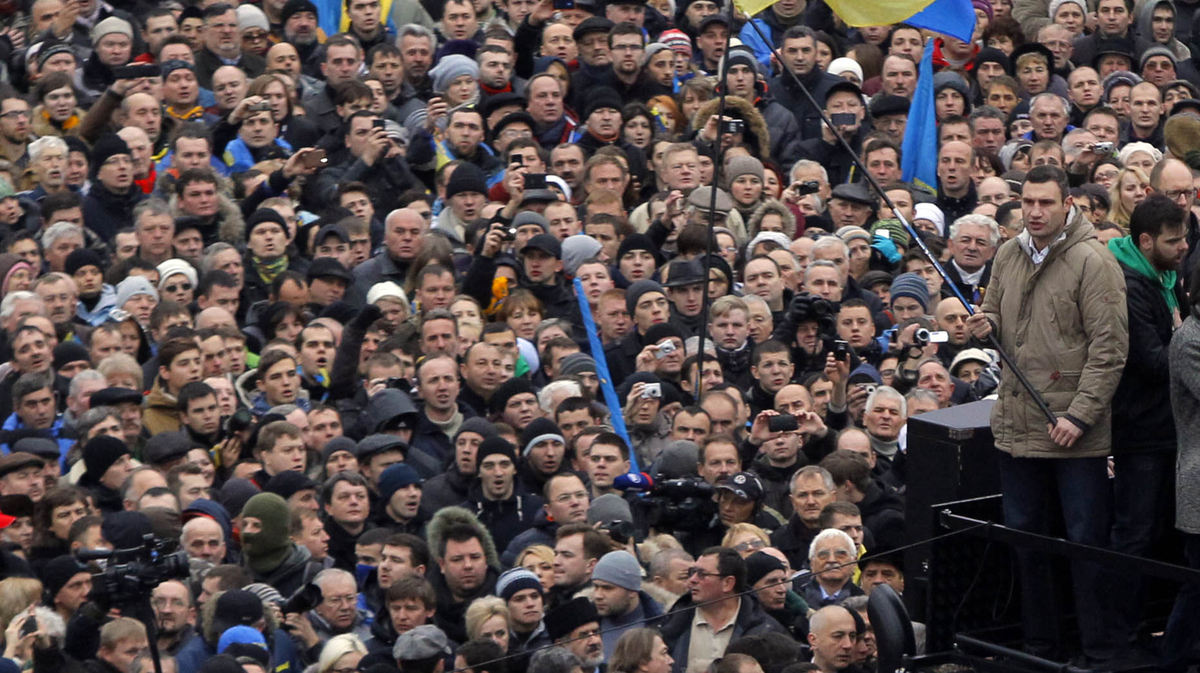 Vitali Klitschko, head of the opposition UDAR party, waves a flag during a rally in downtown Kiev, Ukraine, on Dec. 1. The WBC heavyweight boxing champion has emerged as one of Ukraine's most popular political figures, as massive anti-government protests grip the country.

Vitali Klitschko is best-known to the world as "Dr. Ironfist," towering over opponents at a full 6 feet 7 inches, with a punch that delivered 45 victories, including 41 knockouts and only two defeats.

Now 42, Klitschko is the current World Boxing Council heavyweight champion, but he has his eye on a bigger title — president of Ukraine.

Klitschko isn't exactly new to politics: He's already made two unsuccessful bids to be mayor of Kiev, Ukraine's capital, and he's an elected member of Parliament. But the country's current political crisis provides a new arena for the boxer and his political party, the Ukrainian Democratic Alliance for Reform, or UDAR, a word that also translates as "punch."

Klitschko spoke to the huge crowd occupying Kiev's central square and got a warm welcome. But in terms of fiery rhetoric, he was eclipsed by two opposition politicians who shared the same stage.

"He's not experienced politician yet, and during campaign, he will need to answer many questions: about the economy, about reforms, about how to introduce changes, so there would be some challenges," says Oleksiy Haran, a professor of comparative politics at Kiev Mohyla University.

Despite concerns about Klitschko's experience, polls taken last month show that he could beat President Viktor Yanukovych in the likely event that a presidential election would go to a second round.

Klitschko's brother, Wladimir, also a heavyweight boxing champion, deflects questions about his brother's political experience in an interview with NPR. 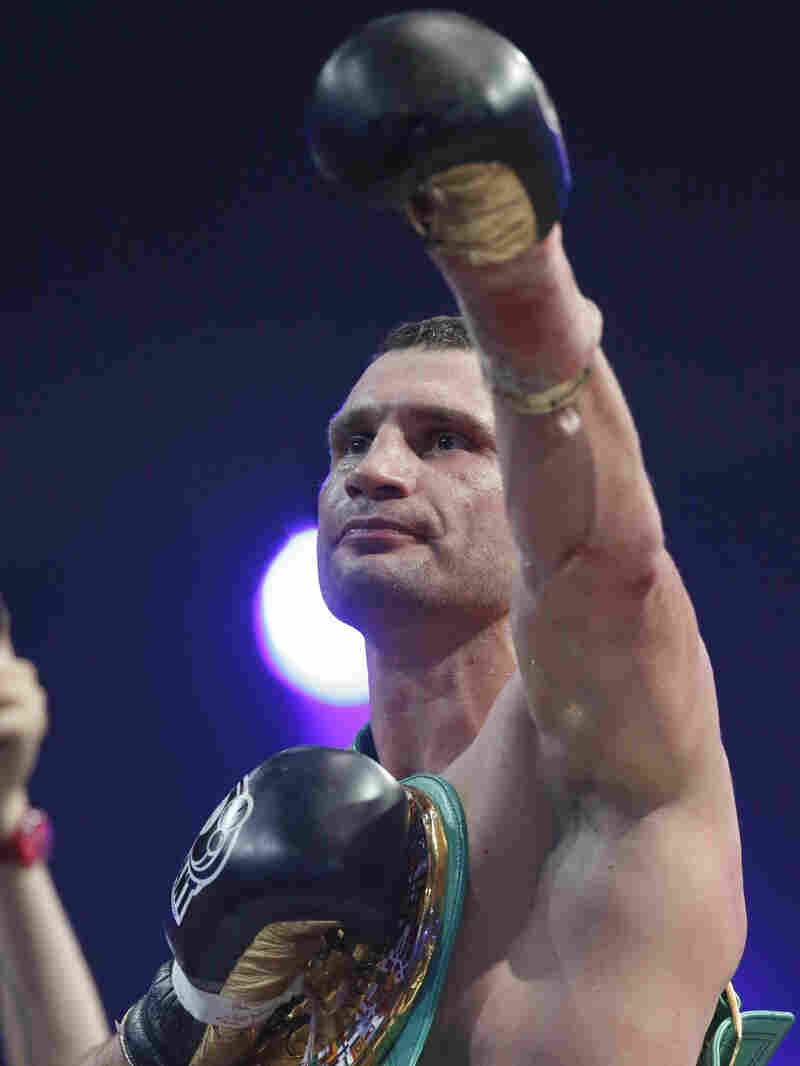 Klitschko celebrates his win over Manuel Charr of Germany during their WBC bout for the heavyweight title in Moscow on Sept. 9, 2012. Misha Japaridze/AP hide caption

Vitali Klitschko says he is more than just an athlete and sports celebrity. The "doctor" part of his "Dr. Ironfist" nickname comes from the fact that he has a doctoral degree in sports science. Not everyone in the crowd seems that impressed with Klitschko's intellectual prowess.

"I think he's not, maybe, not that good as a politician, but he's quite honest, so people trust him," says Maxim, a 30-year-old computer programmer, who didn't want to give his full name.

Still, Maxim says that if he had to vote tomorrow, he'd probably choose one of the more experienced opposition leaders.

"Unfortunately, we are not taking him seriously now, because we were disappointed by his actions on Sunday, because all people came to the street — they were waiting for some leaders to take responsibility and to tell people exactly what to do," she says.

More than 300,000 people came to the square that day, and Klitschko helped dissuade them from storming the president's office. It was the professional fighter who said the protest must remain a peaceful demand for justice.