Accessibility links
Denmark's 'Fix Rooms' Give Drug Users A Safe Haven : Parallels Government-sponsored drug consumption rooms may be helping save the lives of drug users in Denmark. Addicts can use drugs safely and without being judged in the "fix rooms," which have medical staff on duty to treat overdoses. 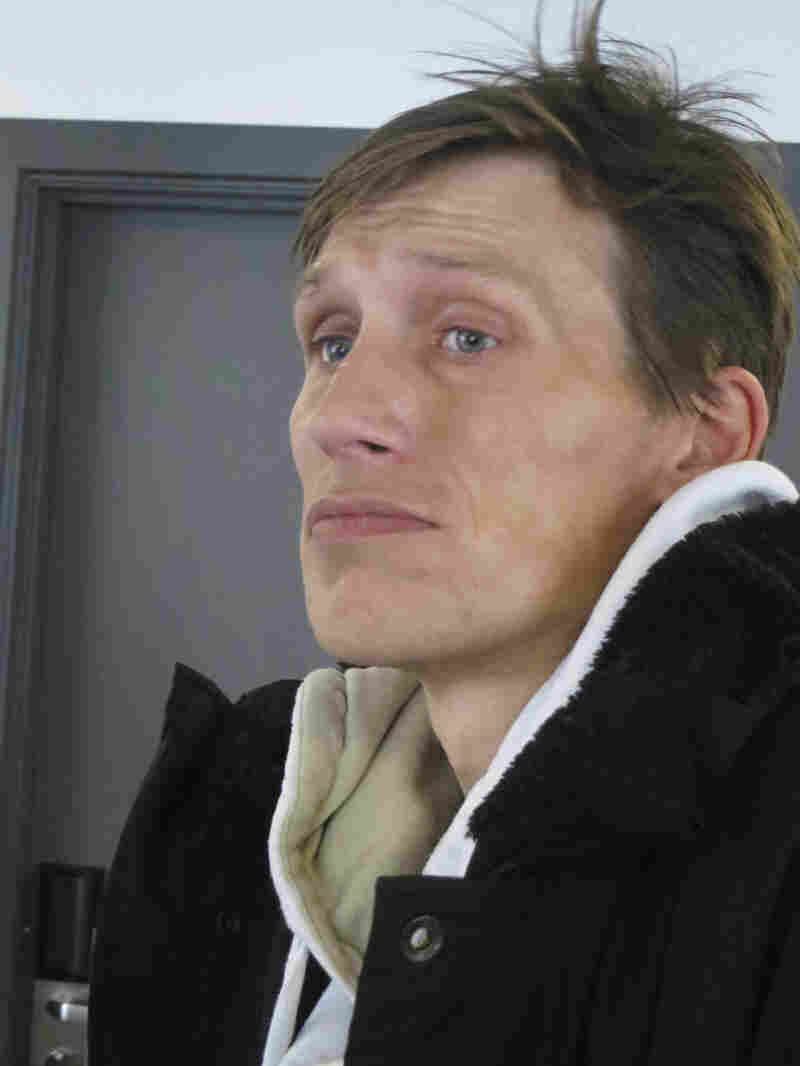 In the past, when this gaunt-faced Dane had to hide in elevators and stairwells to feed his addiction, he probably wouldn't have been so willing to advertise that fact. Back then, his days were spent scouring Copenhagen — mostly the notorious Vesterbro neighborhood — for places to smoke, out of sight of the police and children. He says he never felt safe, understandably, given what happened to one of his friends.

"My friend, he [was trying to] get some sleep, when he had smoked," Jensen recalls.

That's when an arsonist stopped by.

"They put gasoline here, on top of his head. And put on fire and just let him ..." Jensen trails off, though he notes the friend survived.

All this is by way of explaining why, for Jensen, this year has meant the difference between "hell" and "heaven." It's not that he's quit — though he is taking methadone, which has helped him cut back. It's that now he has a place to come and take his drugs in peace.

In June 2012, the Danish Parliament passed legislation making it possible for municipalities to open so-called drug consumption rooms (known in Denmark as "fix rooms" and elsewhere, more specifically, as supervised injection sites) — facilities where adults with serious addictions can bring their illegal drugs and take them, legally, under the watchful eye of a nurse. Within four months, Copenhagen had opened the first. Two other cities have since followed suit.

Denmark is not the first country to try out the DCR concept — though it is the first in almost a decade and the Danish launch rate has been exceptional. The initial wave of DCRs opened in the 1990s in Switzerland, Germany and the Netherlands. In 2003, Vancouver became the first (and still only) North American city to have one, and a handful of other countries came onboard around the same time. Since then, there has been a bit of a lull.

But a growing body of evidence suggests that DCRs can save lives and reduce the public nuisance of open drug use without increasing crime. The DCR strategy seems to be, once again, getting attention — even in the U.S., where places like Seattle, San Francisco and New Mexico are starting to consider the idea more seriously. 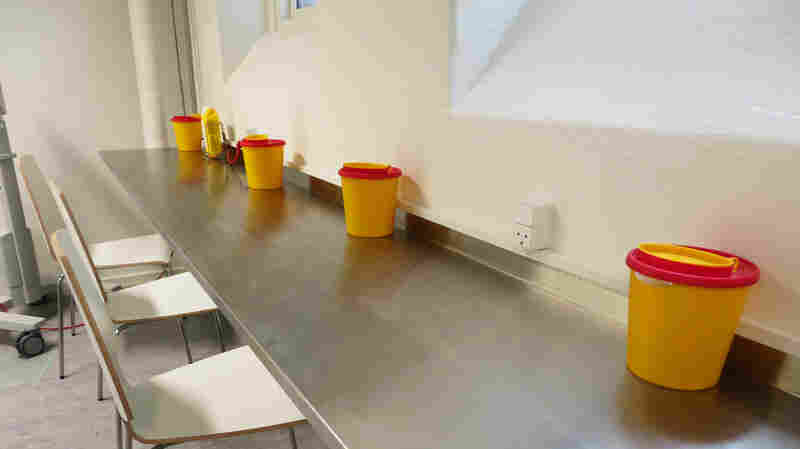 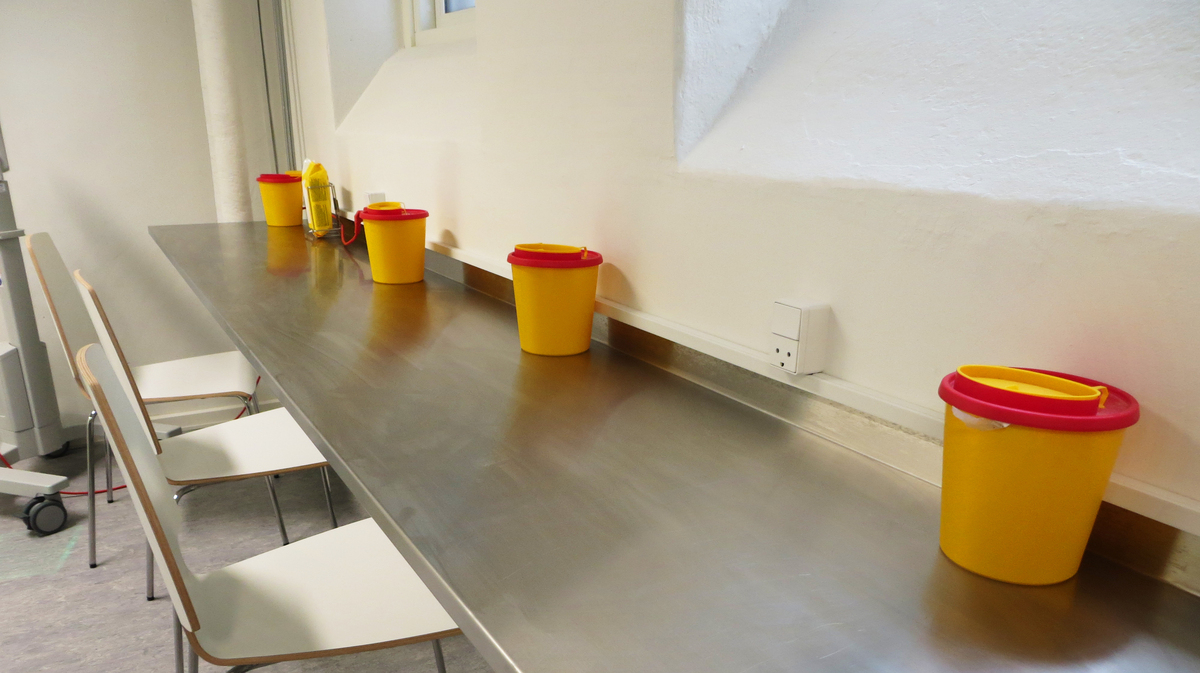 Inside the drug consumption room in Aarhus, Denmark's second-largest city.

"It's very similar to the early days of needle exchange in the U.S., where there was a lot of opposition," explains Laura Thomas with the New York-based Drug Policy Alliance. "Pretty much all of that opposition has now faded away and a lot of people acknowledge they were wrong to oppose it: that it didn't increase drug use, that it didn't do a lot of things that people feared. But at the same time, there's a very human cost to a slow learning curve."

So far, Copenhagen's two DCRs (a second one opened in August) have hosted 1,800 unique users, including people who smoke and inject heroin and cocaine.

Rasmus Christansen, manager at one of the Copenhagen DCRs, explains how the process works. On their first visit, drug users register anonymously, using a nickname and the year of birth.

"But it's not like East German border control to get in," he says. "We want people to get [into the rooms] pretty fast ... so we can get drug consumption out of the streets."

Inside, to the left, behind a huge window, is cluster of smokers with improvised pipes, enveloped in haze. To the right is a long, stainless steel table where several people sit, injecting themselves with heroin, cocaine or both. Some finish and leave quietly. A few slump over the table, asleep. One man gets up and paces frantically back and forth, swearing and shouting. In the middle of it all, sits a nurse in street clothes, calmly taking in the scene. 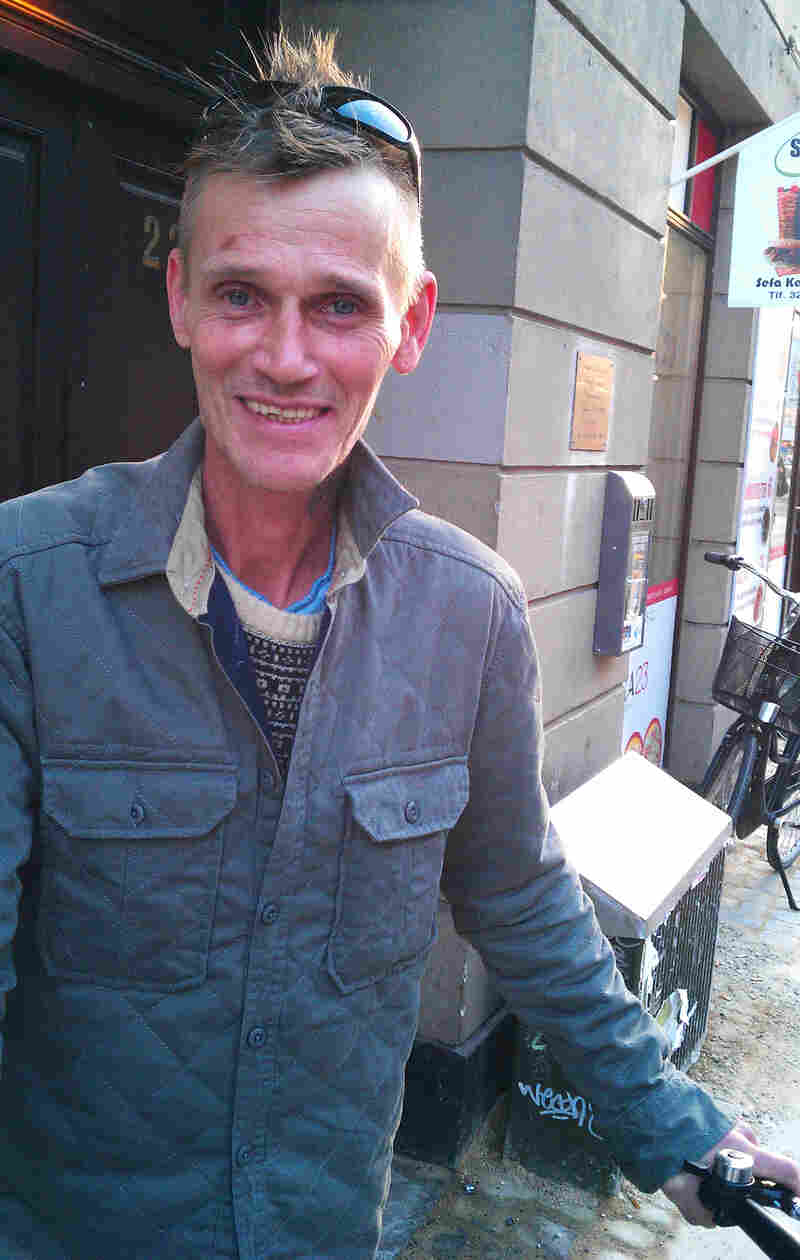 Heroin addict Jimmy says he isn't surprised that some studies say DCRs increase the rate of admission into detox programs. Users can see that "normal people have fun too ... and that life is not just drugs." Sidsel Overgaard for NPR hide caption

Every day, these nurses witness up to 800 injections. During this first year, 135 people have overdosed; none of them have died.

That is probably the largest measure of success, Christansen says, given Denmark's record-high 285 drug-related deaths just two years ago (part of a larger global trend).

Christansen cites another achievement: In one year, the DCR has helped these hard-to-reach users make more than 1,000 contacts with the broader welfare system to get help with things like housing and medical care.

The program is changing the mind of former skeptics, like Deputy Police Inspector Kaj Lykke Majlund.

"We used to think police could solve all these problems alone. But that doesn't work," he says. "We have to understand that drug users — the severely addicted — they need help. They need treatment, not punishment."

To that end, Majlund has established a 2-square-mile "free zone" in the Vesterbro neighborhood where officers don't arrest adults for possession — though dealing is a different story.

Of course not all Danes support DCRs. Critics, like Conservative People's Party member Tom Behnke, say the "fix rooms" condone criminal activity. But even he says the bigger problem is that DCRs give Denmark an excuse not to do more to fix a broken treatment system.

"I have met people who have struggled for years to come into treatment," he says, adding that "it's a lot easier to live on the streets as a drug-addicted person."

And it's true, while staff members are friendly and chatty, they do not actively push treatment or even ask very many questions. So it may seem counterintuitive that at least one case study suggests DCRs actually increase the rate of admission into detoxification programs.

But one heroin addict who gives his name as Jimmy says that doesn't surprise him at all.

"I reckon this helps people because ... [users] can see normal people around and how things work, and that normal people have fun too, at work, and that life is not just drugs," he says. "If they see a little bit of that close to them ... I don't think that encourages them to continue using drugs."