Accessibility links
Once Victims Of Stalin, Ukraine's Tatars Reassert Themselves : Parallels Stalin ordered the Tatars on the Crimean Peninsula rounded up and sent to the deserts of Central Asia in 1944. Nearly half died. Today, an estimated 250,000 Tatars have returned and are organizing. 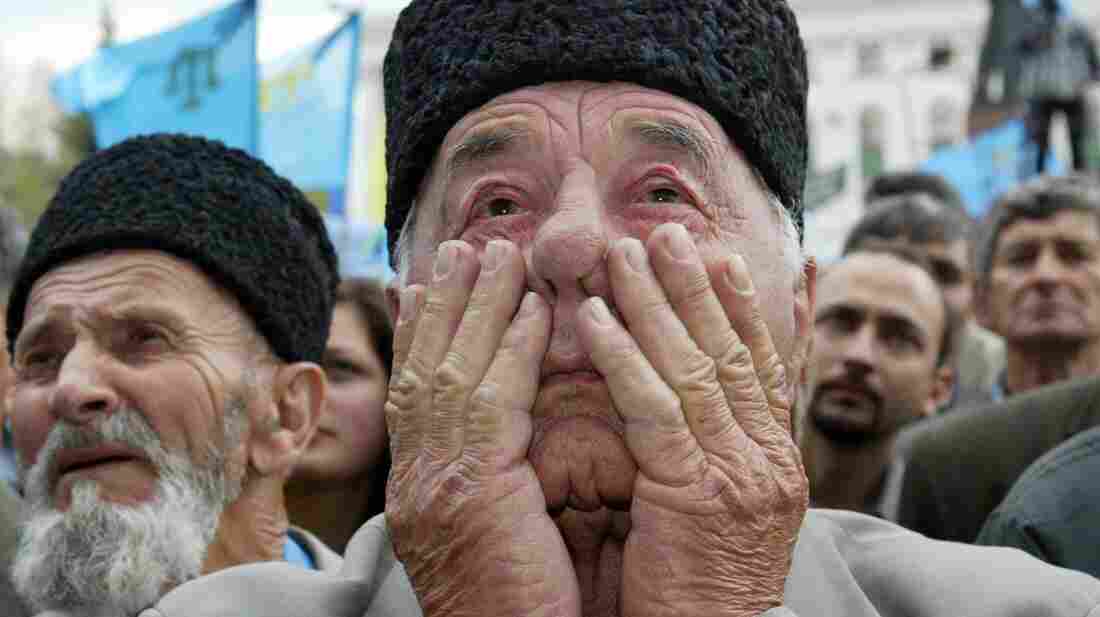 A Crimean Tatar man cries at a mass rally held in Simfropol, Ukraine, on May 18, 2004, the 60th anniversary of the deportation of Tatars from Crimea. Sergei Supinsky/AFP/Getty Images hide caption 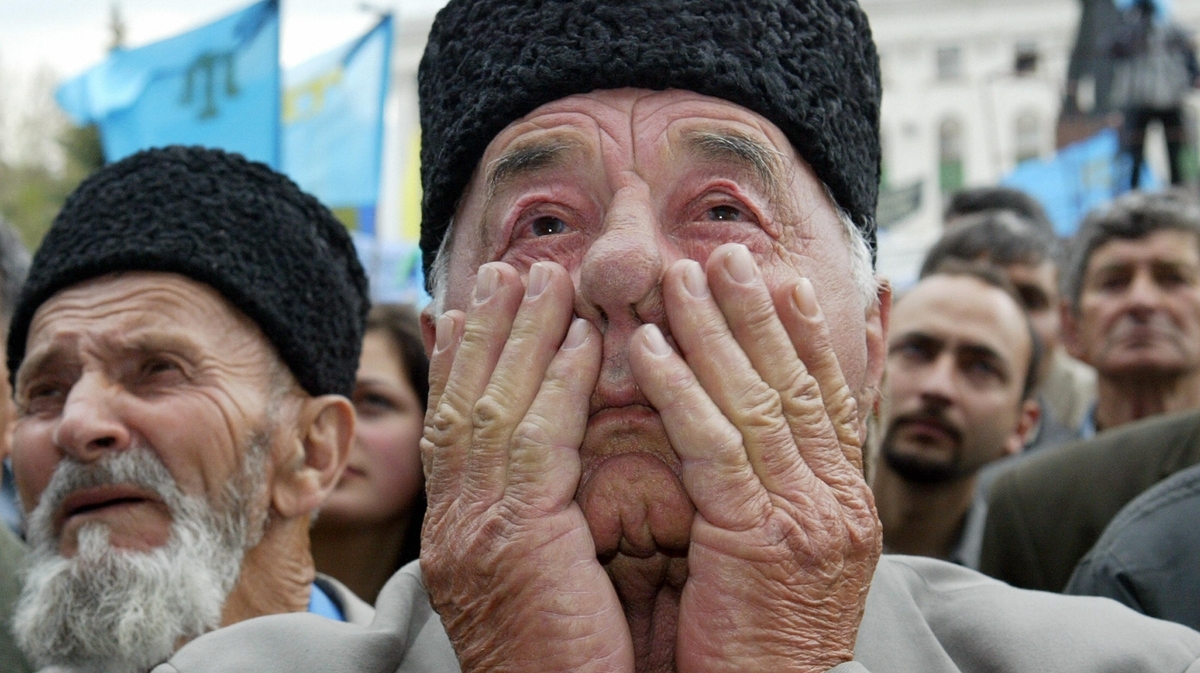 A Crimean Tatar man cries at a mass rally held in Simfropol, Ukraine, on May 18, 2004, the 60th anniversary of the deportation of Tatars from Crimea.

In 1944, on the orders of Soviet dictator Josef Stalin, the entire population of Tatars on the Crimean Peninsula was rounded up and sent to the deserts of Soviet Central Asia.

Nearly 70 years after that wartime atrocity, the Tatar population is still working to reassert itself in its homeland.

Mullah Ziyatdin, 82, was just 12 when he and his family were rousted in the middle of the night, ordered to gather a few belongings and shoved into freight cars for a nightmarish three-week journey. The freight-car doors were opened every few days.

"When we'd get to a station, they would dump the bodies of people who had died along the way," he recalls.

The conditions were equally brutal when the train journey ended.

"When we got there, there wasn't enough food. Many people died — of heat, cold, hunger, disease," Ziyatdin recalls. "Of 20 families with us, only four survived."

Today, the mullah prays at a new, two-story mosque in the farming village of Chistopolye, near the eastern end of Crimea.

The Crimean Peninsula is an area about the size of Massachusetts that juts into the Black Sea. It's almost an island, only thinly connected to the mainland.

Over the centuries, it's been part of the Russian Empire, the Soviet Union and now Ukraine, but before that, it belonged to the Crimean Tatars, descendants of the golden horde of Genghis Khan.

Stalin accused the Tatars of collaborating with the Nazis, who occupied the Crimean Peninsula for nearly three years. This was despite the fact that tens of thousands of Tatar men served in the Soviet Army, fighting the Germans. 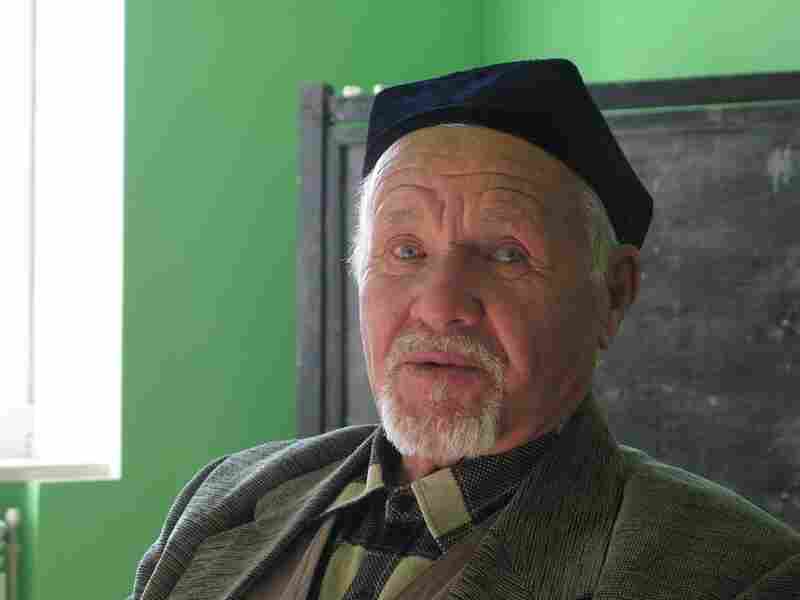 Mullah Ziyatdin, 82, was 12 when his family was forced to board freight cars that took them to the deserts of Uzbekistan. Courtesy of Diana Derby hide caption 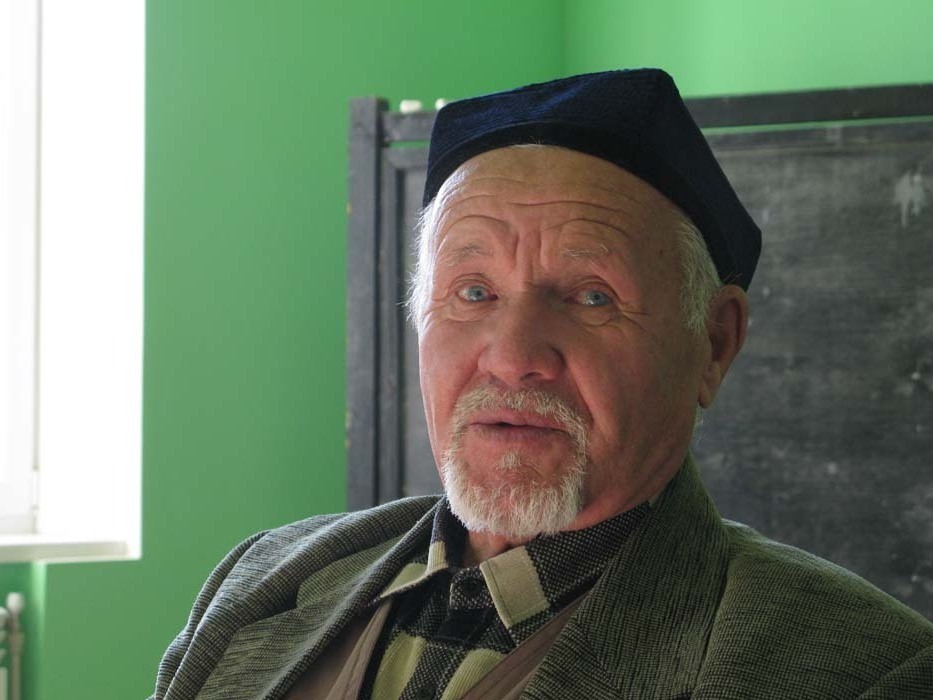 Mullah Ziyatdin, 82, was 12 when his family was forced to board freight cars that took them to the deserts of Uzbekistan.

When Stalin's secret-police troops rounded up Tatars in 1944, their population consisted of nearly 200,000 women, children and old people.

Najiye Batalova was 6 when her family was deported. She has worked most of her life as a journalist and historian of the event. In all, she says, about 46 percent of the exiles died from the harsh conditions. Many survivors suffered what amounted to slave labor in the cotton fields of Uzbekistan.

The Crimean Tatars weren't the only people subject to mass deportations under Stalin's rule. Other nationalities, including Chechens, Ingush and others from the Black Sea and North Caucasus region were also deported.

It wasn't until after Stalin's death in 1953 that the Soviet government withdrew the charge of treason against the Tatar people, freeing them from the labor camps.

We are not a national minority. We are the indigenous people from here. We are the owners of the Crimean Peninsula.

Some nationalities, such as the Chechens, were allowed to return to their regions in the 1950s, but it wasn't until the late 1980s that the Crimean Tatars were finally able to start coming home.

Batalova's family settled in the Crimean port city of Kerch. Now 74, she leads the way through a Tatar settlement, a jumble of small lots and partly finished houses on the outskirts of the city.

Residents say the city gave them land on which to build houses, but in more than 20 years, has never provided basic services, such as roads or running water. Still, an estimated 250,000 Tatars have now returned to Crimea, and they're organizing to claim what they see as their rights.

At the World Congress of Crimean Tatars in the regional capital, Simferopol, hundreds of delegates gather to talk about a political agenda. It's indicative of the Tatars' new status that the session begins with the playing of the Ukrainian national anthem, followed by the Tatar anthem.

Asan Egizov, a 26-year-old political activist, says the Tatars' loyalty is firmly with Ukraine, of which Crimea is now a part, but they want changes on the local level.

Egizov, a first-time delegate to the Congress, says the main problem is that the Ukrainian government considers the Tatars to be a national minority.

"But we are not a national minority," he says. "We are the indigenous people from here. We are the owners of the Crimean Peninsula."

The idea is common among young Tatars like Egizov, who was a child when his parents returned. He wants nothing less than a full restoration of Tatar culture in Crimea, including use of Tatar as the language of official business.

Given that Tatars only make up about 15 percent of a population that is overwhelmingly composed of Russian-speaking Ukrainians, that could take a long time.

But Egizov points out that the Tatars have a significantly higher birthrate than that of most other Ukrainians, and says that in another generation, they could have both demographic and political clout.