Accessibility links
Ukraine: From Breadbasket To Basket Case : Parallels The international community is expected to pump billions into Ukraine in hopes of stabilizing a country with a record of economic instability and widespread corruption. 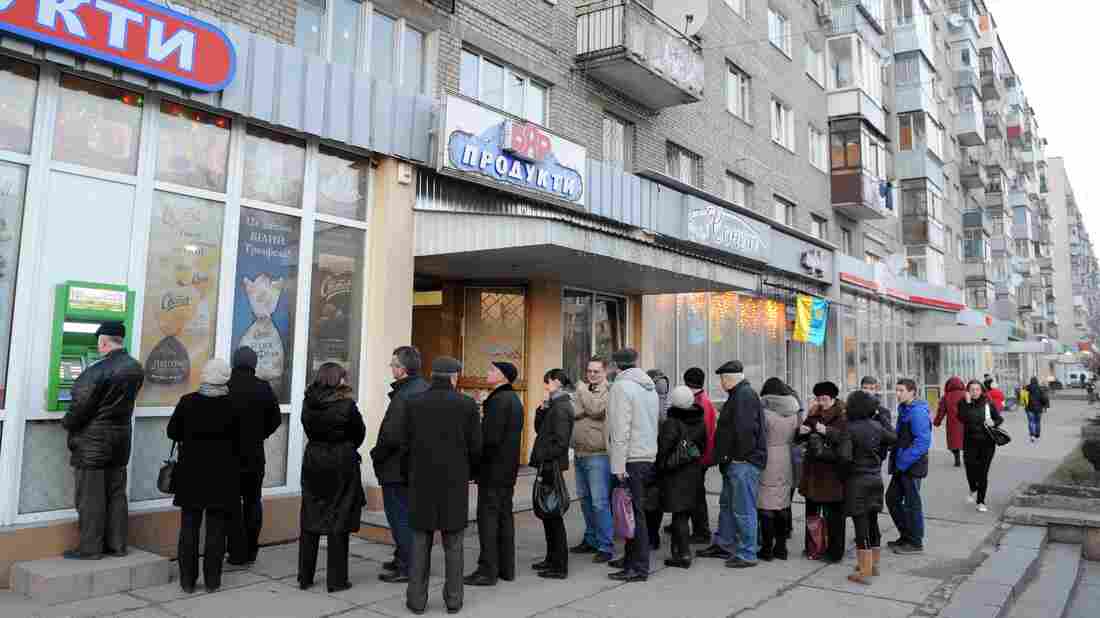 Ukrainians line up to get money from a bank machine in the western city of Lviv on Feb. 20. The country's political crisis has also created economic turmoil. The international community is expected to pump billions of dollars into Ukraine's struggling economy. Yuriy Dyachyshyn/AFP/Getty Images hide caption

Ukraine was known as the breadbasket of the Soviet Union for its fertile fields of wheat. Now it's just a basket case. The outgoing finance minister said the country needed $35 billion to stave off bankruptcy over the next couple years.

Some analysts say that figure may be on the high side. Still, such admissions usually send potential donors dashing for the exits. Yet one thing Ukraine has in abundance these days, in addition to political turmoil, is a long line of financial suitors.

When the European Union proposed a trade deal, tensions rose last fall as Ukrainians debated whether to accept it. Russia stepped in with a counteroffer of $15 billion in loans. The only apparent collateral was a pledge of loyalty to Moscow.

Why are so many offering so much to Ukraine, a land that's struggled economically, is dominated by a handful of oligarchs and is notorious for corruption?

As one of the largest countries in Europe, Ukraine's size and its geography mean an economic collapse could inflict pain throughout the broader region and beyond. World markets got a taste Monday when they abruptly turned south, though many rallied Tuesday.

"Because of Russia's invasion of Ukraine, Russia's stock market fell, the exchange rates of all the floating currencies in the region have fallen sharply," Anders Aslund, of the Peterson Institute of International Economics, told All Things Considered. "There's a general lack of confidence of investors in this region now." 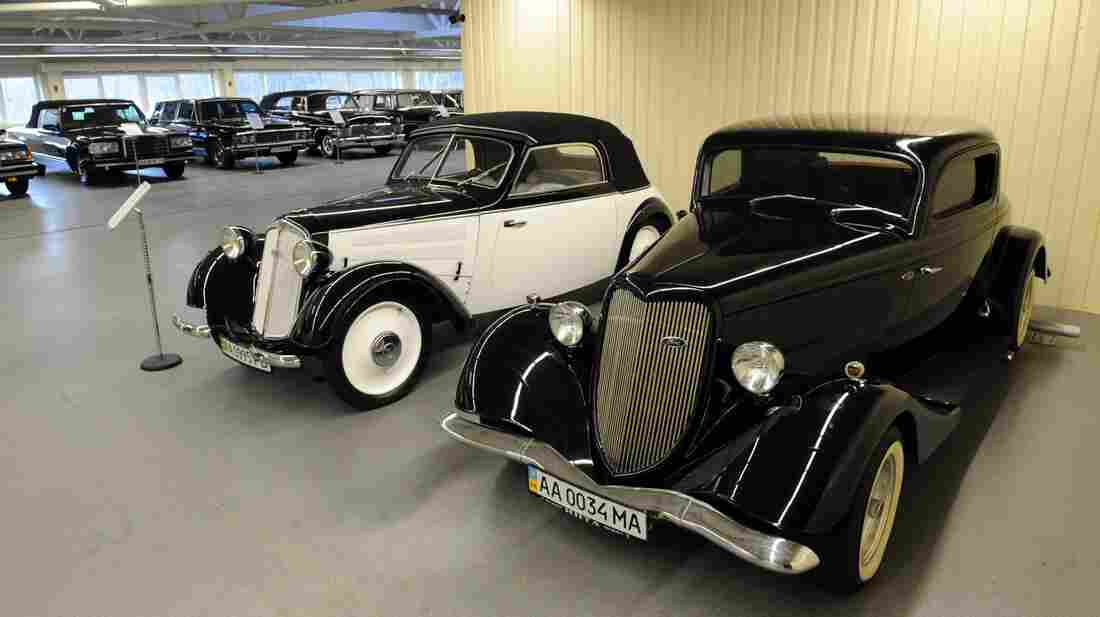 The ousted Ukrainian president, Viktor Yanukovych, had dozens of luxury cars at his country estate outside the capital, Kiev. Ukraine has been plagued by widespread corruption and an economy that is near bankruptcy. Yuriy Dyachyshyn/AFP/Getty Images hide caption 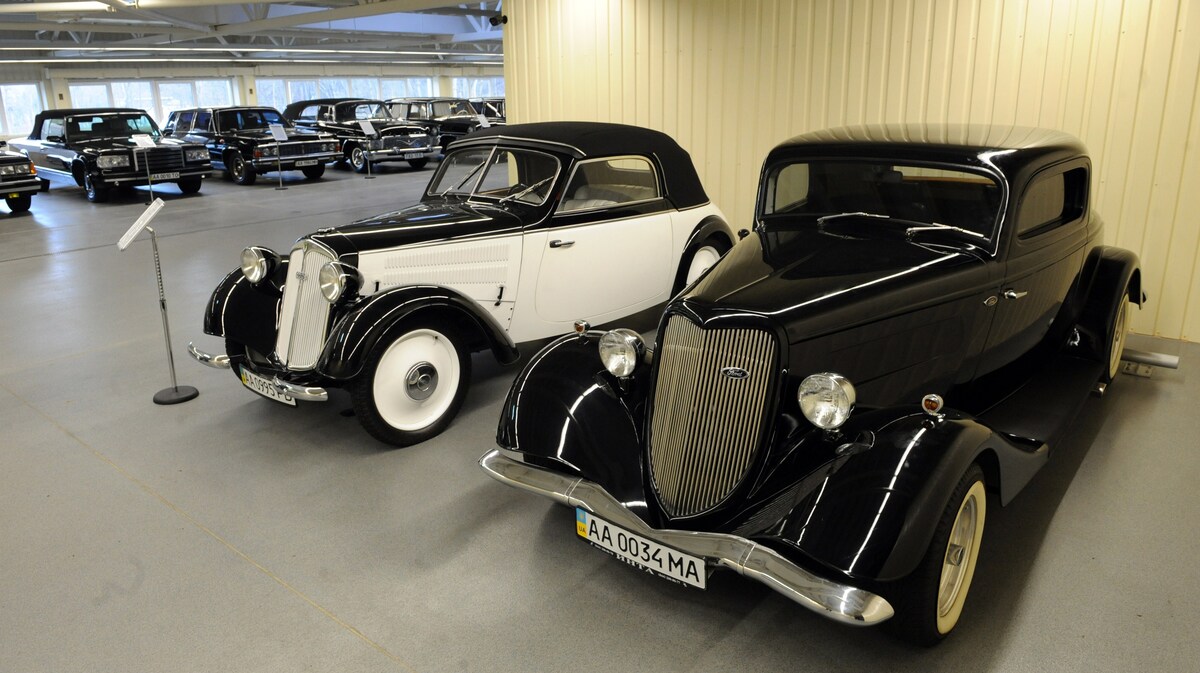 The ousted Ukrainian president, Viktor Yanukovych, had dozens of luxury cars at his country estate outside the capital, Kiev. Ukraine has been plagued by widespread corruption and an economy that is near bankruptcy.

Ukraine had no growth in 2012 and 2013, and the current turmoil appears virtually certain to force an economic contraction in the near term. Yet it looks like a lot of money will likely be pumped into Ukraine in an attempt to stabilize it.

Here's a short list of Ukraine's most pressing economic challenges:

Chronic Corruption: One of the first things Ukrainian protesters did following the ouster of Yanukovych was to tour his gilded country retreat outside Kiev, which included more than 70 cars, a zoo and a golf course.

Yanukovich "had one big interest as president: to enrich himself and his family as much as possible," said Aslund. "This was larceny on a big scale and he couldn't care less about the state of finances of the country."

Transparency International, which tracks corruption around the globe, ranks Ukraine near the bottom, at 144 of 175 countries it studied in its most recent ranking.

In a recent report, the group's Oleksii Khmara said European governments and banks needed to do more to prevent such massive theft:

"The Ukrainian elites have for years salted away ill-gotten gains throughout the EU while the authorities, specifically in the UK, Germany, Austria, the Netherlands, Switzerland and Latvia, failed to apply their anti-corruption and anti-money laundering legislation to stop them."

Oligarchs Dominate Economy: As in Russia, a handful of well-connected businessmen have built astounding fortunes and control a large portion of the country's industrial base, which includes steel, mining and gas.

The oligarchs have proved adept at protecting their fortunes and keeping close contacts with the country's leaders even as politicians come and go. Several were close to Yanukovych and may now have to change allegiances with his ouster.

"These are people who are basically opportunistic," said Aslund. "They see what game is being played — is it the old game, or is it a new game. In public, they are always speaking for good economic reforms, but if they are not convinced, they won't play ball."

The richest and most influential is Rinat Akhmetov who was close to Yanukovych and is the biggest player in the country's mining industry in the eastern region of Donbas. The son of a coal miner, he paid 136 million British pounds ($226 million) for a penthouse in London's Knightsbridge neighborhood in 2011, which was the most expensive property ever bought in Britain.

Dependency On Russia: Ukraine is still a major global producer and exporter of wheat and corn, but even here, it has fallen far short of its potential.

Last fall, Ukraine agreed to let China rent 5 percent of its territory for the next 50 years to grow crops. It's a huge swathe of land, totaling more than 7 million acres, or roughly the size of Massachusetts.

But by most any standard, Ukraine has been hurting.

At the time of the 1991 Soviet breakup, Russians and Ukrainians had roughly the same gross domestic product at around $5,000 a person. Today, Russians earn more than twice as much as Ukrainians, according to the IMF.

While Ukraine has fallen behind Russia, it remains heavily dependent on its larger neighbor. As it neared financial collapse recently, Ukraine turned to Russia for the $15 billion bailout. But that money has been suspended and any future funds may depend on how friendly the Ukrainian government is toward Moscow.

Ukraine and Europe also need Russia's gas. The giant Russian producer, Gazprom, sends roughly one-third of its gas to Europe, and much of it goes through pipelines that cross Ukraine.

Over the years, Russia has regularly threatened Ukraine's gas supply when there is political tension — and Moscow recently warned that it may raise prices for Ukraine.