Accessibility links
As World Cup Looms, Qatar's Migrant Worker System Faces Scrutiny : Parallels More than 85 percent of the people who live in Qatar are not citizens. Most are foreign workers who can face harsh conditions that are coming under increasing scrutiny as the emirate undergoes a building boom in advance of the 2022 World Cup. 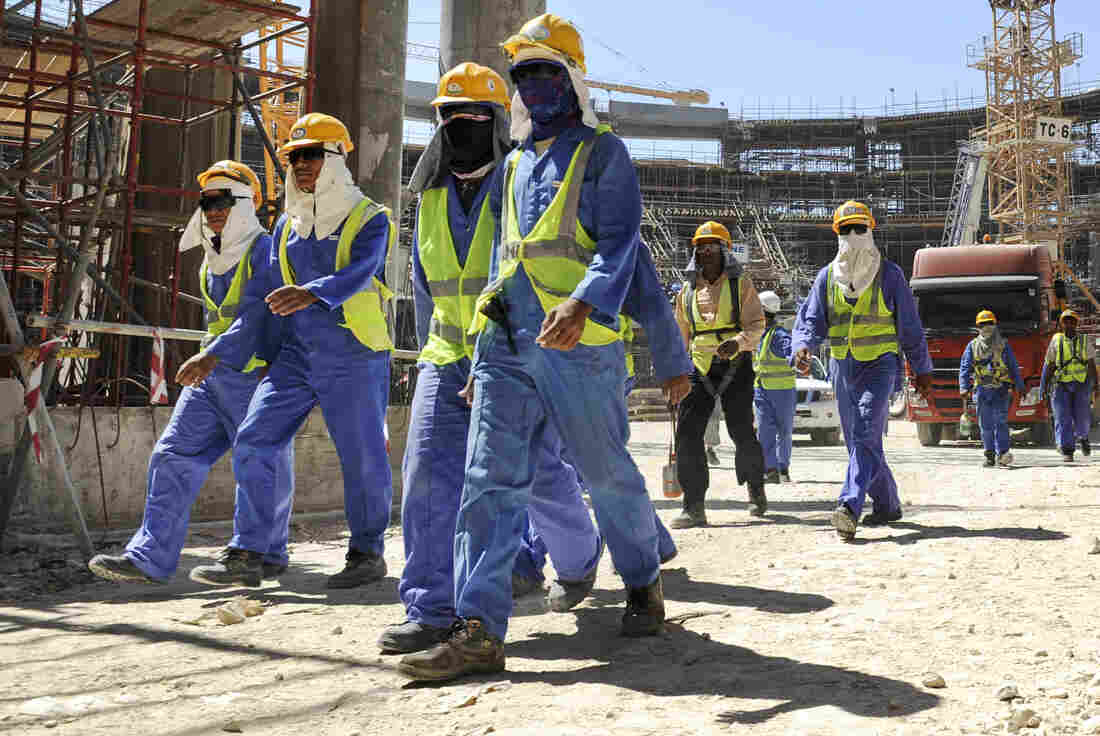 Foreign construction workers leave a work site in Qatar's capital Doha on Nov. 19. Soccer's ruling body, FIFA, says it will put pressure on Qatar, the host of the 2022 World Cup, over the conditions of migrant workers in the construction sector. EPA/LANDOV hide caption 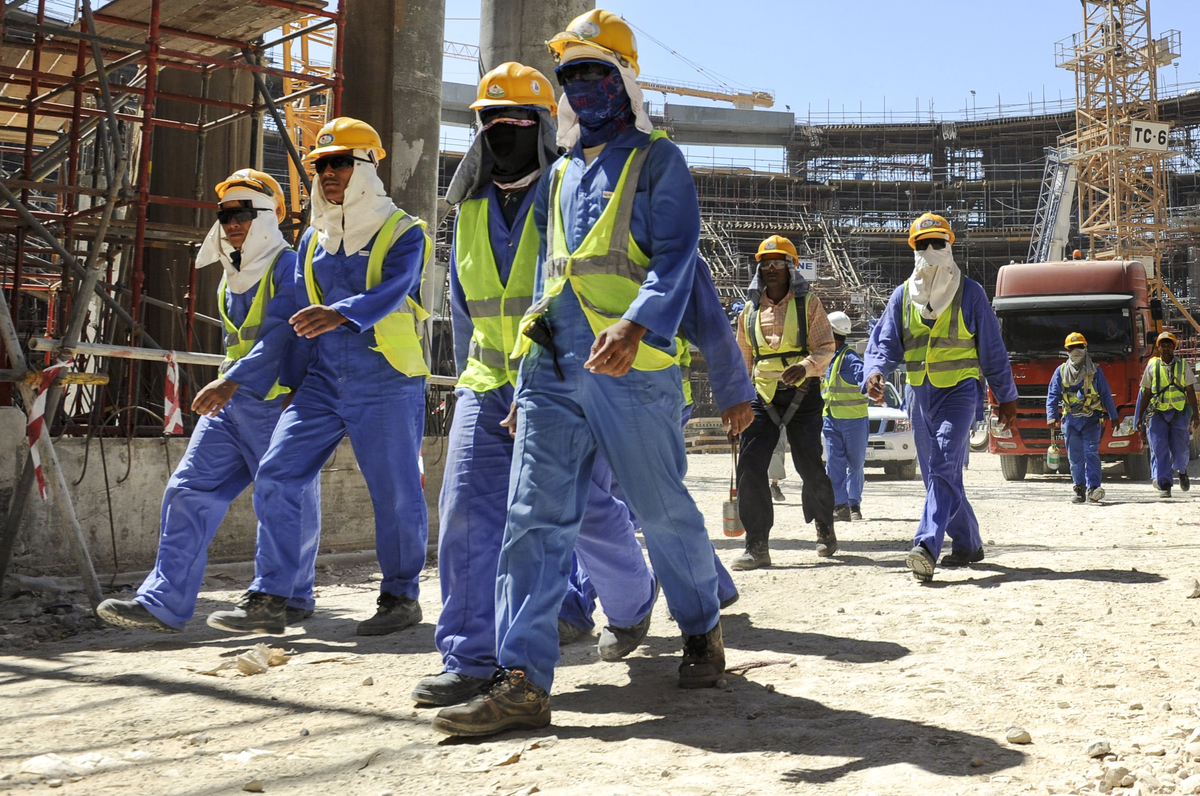 Foreign construction workers leave a work site in Qatar's capital Doha on Nov. 19. Soccer's ruling body, FIFA, says it will put pressure on Qatar, the host of the 2022 World Cup, over the conditions of migrant workers in the construction sector.

Over the past decade, Qatar's population has soared from 660,000 to more than 2 million. Here's the catch: Qataris themselves number only around 260,000.

The rest, more than 85 percent of the population, are not citizens. As Professor Mehran Kamrava, an American scholar at Georgetown University's campus in Qatar, says, they are all migrant workers of varying types.

"There are gradations of migrant workers," he noted. "I happen to be a white-collar migrant worker, as a professor. But there are lots of people who work in the construction industry. There are also domestic servants, then there are people in the services sector, in the hospitality industry."

Not to mention the civil service, or even the judiciary. A lot of Qatar's judges are from Egypt and Sudan.

Qatar's system of hiring migrant labor — a system used elsewhere in the Gulf region — has come under fire this year. Here's the harshest judgment you'll hear. It's from Sharan Burrow of the International Trade Union Confederation: "Qatar is a slave state."

And when Burrow makes that claim, she is speaking of the kafala system, or sponsorship system.

Foreign workers must be sponsored by a Qatari to enter the country. They typically submit their passports to their employers. They have no freedom to change jobs or leave the country at will. They need an exit permit to get out of Qatar, and that permit has to be approved by their employer.

Amnesty International criticized this system in October. And The Guardian newspaper published an expose about an alarmingly high rate of fatal on-the-job accidents among construction workers from Nepal. According to the newspaper, 44 Nepalese workers died in a two-month period from June to August this past summer.

The reason for the current wave of criticism is that Qatar's long-term building boom has gone into hyperdrive.

In anticipation of the 2022 World Cup, which Qatar will host, the country is building new infrastructure. This includes a subway in the capital Doha, where most of the population lives. They crack the old joke that the national bird is the construction crane.

One Friday night, the workers who are been doing the building gather in the hundreds, if not thousands, near a traffic circle in central Doha. These are men who construct and service Qatar's gleaming, LEED-certified buildings. 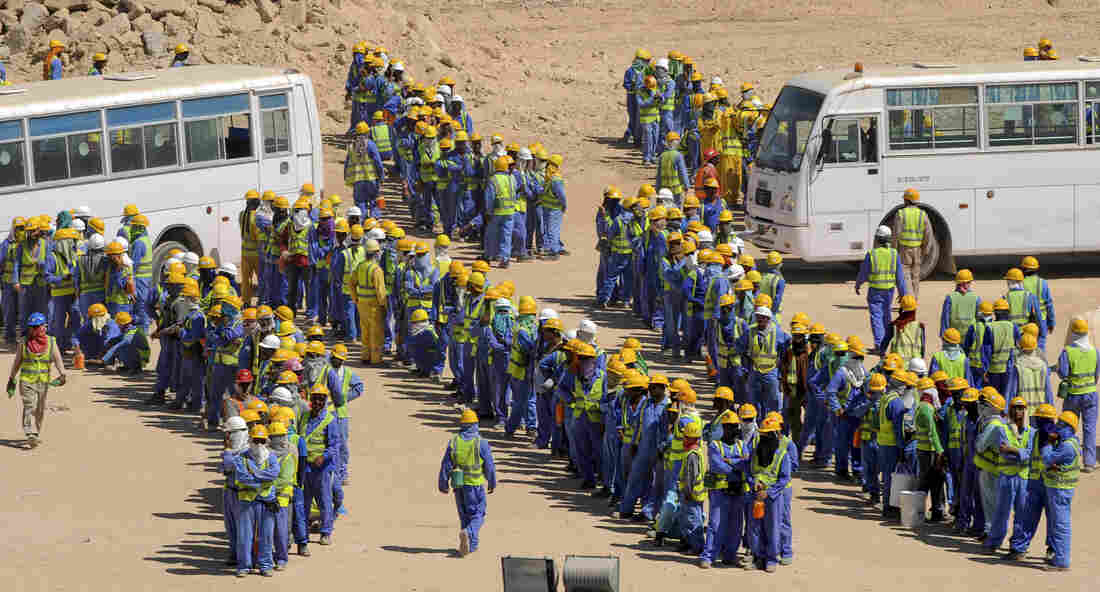 Foreign construction workers line up for the bus back to their housing camp in Doha, Qatar, on Nov. 19. Amnesty International says workers often face problems with the nonpayment of wages, harsh and dangerous working conditions, and poor housing. EPA/LANDOV hide caption 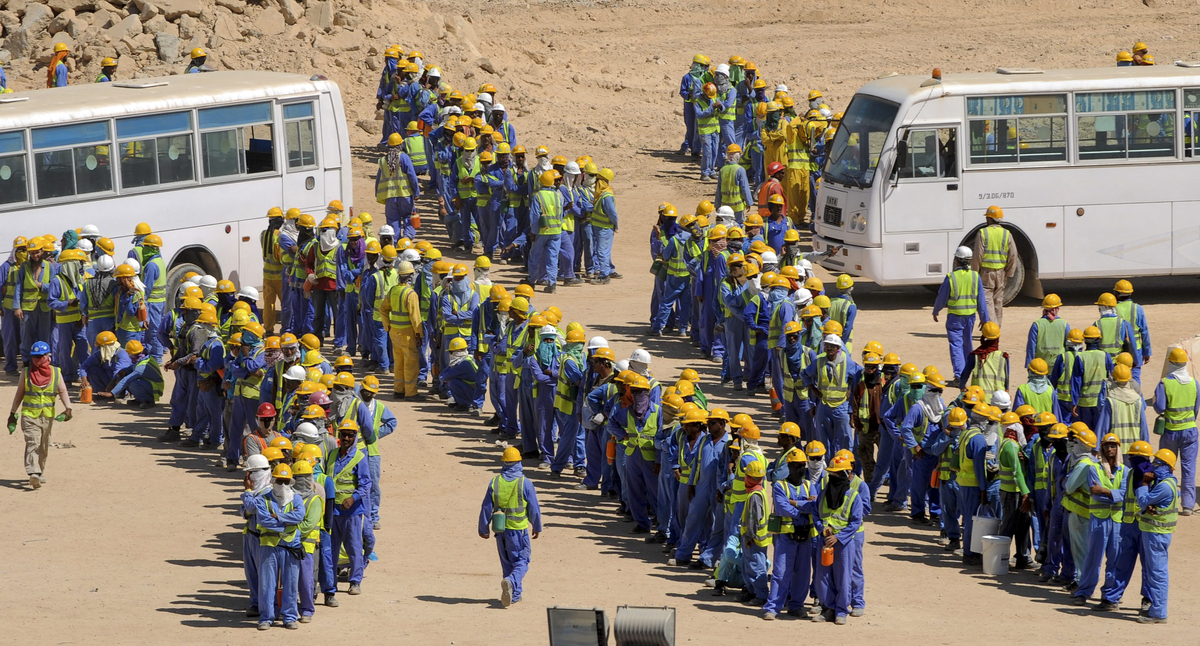 Foreign construction workers line up for the bus back to their housing camp in Doha, Qatar, on Nov. 19. Amnesty International says workers often face problems with the nonpayment of wages, harsh and dangerous working conditions, and poor housing.

In the Musherib neighborhood of Doha, one of the oldest neighborhoods in the city, this is the regular Friday night gathering place. It's a day off for all of the workers in this country, and they gather here with essentially nothing to do. They're barred from the malls on their day off, so it's a place to come and talk.

Many are from Bangladesh, Pakistan, Nepal and India. They came to Qatar for the wages and left their families behind.

I ask several men about their jobs, their earnings and especially their passports. A couple of them who work for Qatari government agencies say they hold their own passports. But most were recruited by labor contractors to work for private companies.

Molay, who's from Nepal and works in a jewelry store, says, "I don't have my passport on me, but when I want to go back [to Nepal], they give it back to me."

Riaz, who's from India and mans the cash register at a small grocery, says his employer and sponsor has his passport. If he wanted to go home, he would have to ask his sponsor to give him his passport, he says.

I hear many stories along these lines, just as Amnesty International did when it interviewed workers here. The human rights group found that 90 percent of these workers have surrendered their passports, and in effect their freedom of movement, to their employer.

Off a main street in Musherib, we enter a two-story walk-up where the front door was off its hinges and garbage was strewn about the foot of the stairs.

On the second floor, there are four rooms, each housing five workers. There are clotheslines everywhere with laundry hanging over them. A window in the hall is just a hole in the wall. There's no glass in the window and no shade at all. Shoes and sandals are everywhere.

In his room, five bunk beds line the walls of a 10-by-20-foot space. He and four other Bangladeshi migrants have a TV and a computer. Their shirts hang from the walls. It has the look of very provisional accommodations.

Yet he's been working in Qatar for 20 years and gets home only once every two years or so.

The workers I ask typically say they send about half of what they make home. Mohammed Tazil Islam says, for him, that could be 700 Qatari rials, or about $200 a month. I ask him if he would want one of his sons to do the same thing when he grows up. 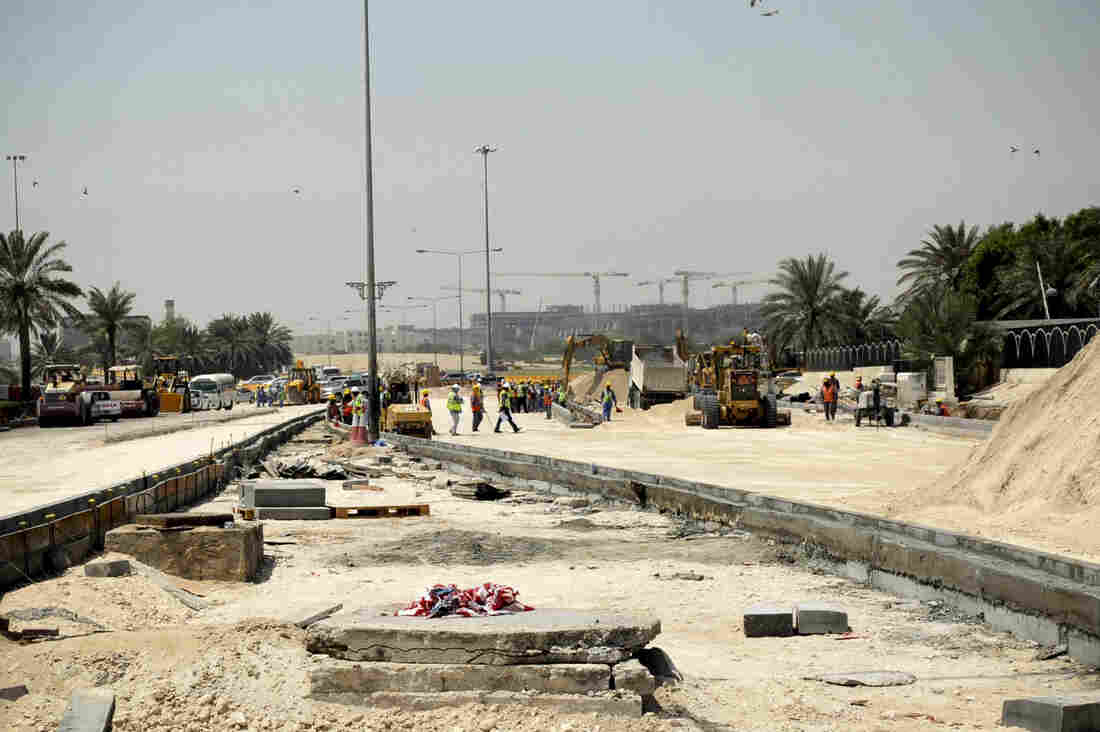 Foreign laborers work on a new road in Doha, Qatar, on Oct. 4. Recent reports have said that construction workers in Qatar have been subject to abuse and harsh working conditions. EPA/LANDOV hide caption 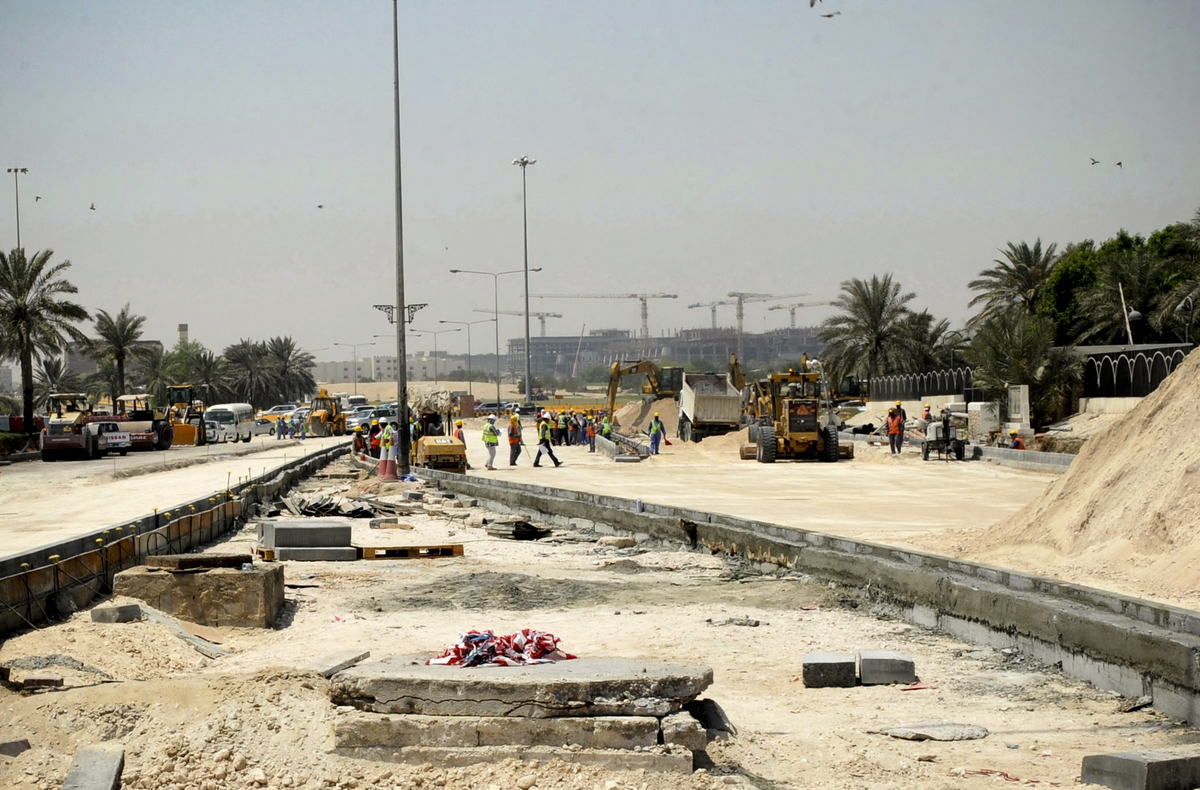 Foreign laborers work on a new road in Doha, Qatar, on Oct. 4. Recent reports have said that construction workers in Qatar have been subject to abuse and harsh working conditions.

"Whatever is in his fate is going to happen. But for me, I think it would be a good thing," he says.

Migrants like Mohammed Tazil Islam have come here for the pay, and their horizons are carefully circumscribed by law and common practice. Stop working, and you go home.

A Host Of Restrictions

There are other restrictions. A Pakistani restaurant here caters to the migrant worker trade, and it employs Pakistanis. But an enterprising migrant could not just start a business on his own.

A business must have a Qatari owner, at the very least a partner who shares in the profits. So, there's not much chance of striking it rich and no chance of putting down roots.

If a migrant man married a Qatari woman, she would lose the ample benefits that Qatari couples get, including free land and interest-free loans to build a house. And their children would not be citizens.

Beyond these common practices, there have been allegations of misleading contracts, pay withheld, salaries below what was promised, long working hours and, as reported by The Guardian, unsafe working conditions.

When all this was publicized this past fall, Qatar commissioned a London law firm to study the problem and make recommendations, which aren't yet public.

Some of the burden of defending Qatar fell to Hassan Abdallah al-Thawadi, the chairman of the country's World Cup committee.

"It's very, very, very important and crucial for the world to understand that the practices that have been documented or alleged in whatever reporting, these practices are illegal under Qatari law," said al-Thawadi.

He said, for example, that it's against the law for employers to hold the passports of migrant workers. And, he acknowledged, "There is an issue with enforcement."

How Tiny Qatar 'Punches Above Its Weight'

Al-Thawadi said more inspectors will be hired to enforce the law.

Some expats I asked about the letter of Qatari law and its implementation in practice were cynical. As one American put it: There are traffic laws here; you've seen how people drive.

Those who defend the kafala system point out that there's no system of credit for workers in Qatar. Employers are legally responsible for the debts of workers they sponsor.

The abuse of the kafala system was evident when a French soccer player who had signed with a local Qatari team got into a contract dispute with the owner — who was his sponsor. The soccer player was blocked from leaving the country until this fall, when public pressure ended his 19-month-long involuntary stay.

The fact that he's a soccer player compounded the embarrassment for al-Thawadi, the chair of the Wold Cup committee.

"The current sponsorship law is being reviewed," he said, adding that the authorities were looking at the exit system that requires workers to get permission to leave from their employers.

Qataris are proud to say that the World Cup will bring attention to the Gulf. So far, it has brought attention to a very unattractive Gulf institution.