Accessibility links
Instead Of Sending Students Abroad, Qatar Imports U.S. Colleges : Parallels What do you do if your country is extremely rich and wants to give its college students a first-rate education without leaving home? Qatar has imported a host of U.S. universities that include Georgetown, Northwestern and Cornell. 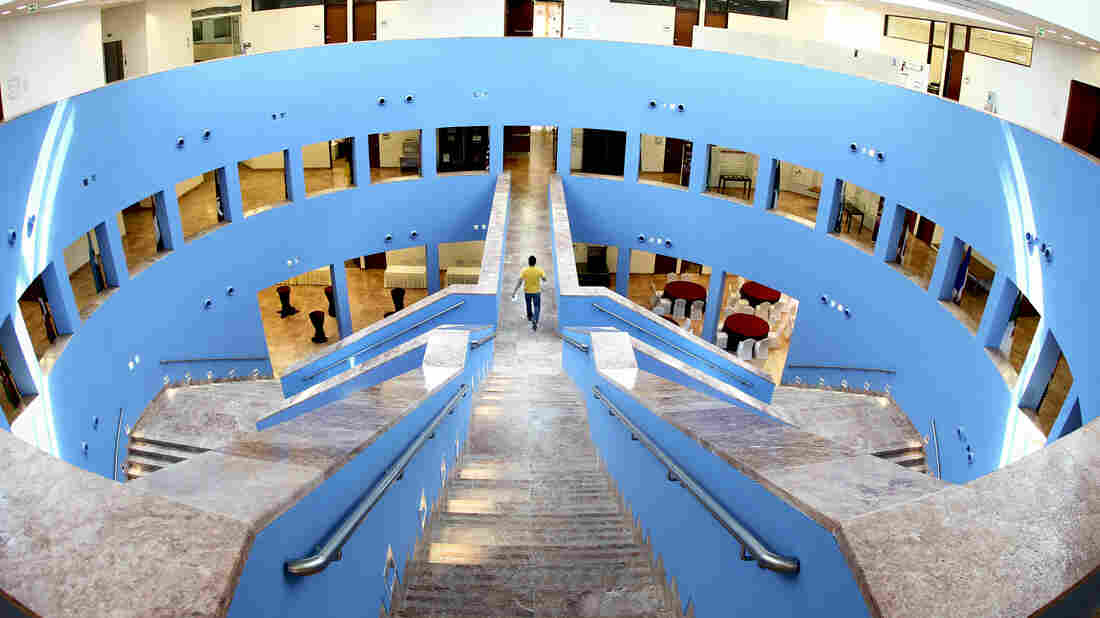 A man walks along a pathway at the Texas A&M University campus in Doha, Qatar. Osama Faisal/AP hide caption

In Qatar's rapid race to modernity, the emirate has created a distinctive approach to educating its young: It has effectively imported a host of American universities.

Dr. Sheikha Aisha bint Faleh bin Nasser Al-Thani, a member of Qatar's ruling family, sits on the Supreme Education Council and owns a few independent schools. For her own children, she wanted a top-flight college education. Her sons were educated in Britain.

In the end, Sheikha Aisha's daughter went to Northwestern.

But not the one in Evanston, Ill. She went to Northwestern's branch in Education City, or EC, right in Doha.

Rather than choose between a U.S. education and keeping their kids at home, the Qataris opted to have it both ways.

Befitting a Jesuit institution, there's a Christmas tree in the cafeteria, something you don't often see in this conservative Muslim country.

Seven of Kamrava's Georgetown students sat down to talk with me. Two are Qatari. The others were from India, Singapore, Oman, Saudi Arabia and Algeria.

I asked them about foreign migrant workers who are building the infrastructure for the 2022 World Cup and the criticism Qatar has received about them.

There have been allegations of unsafe working conditions, misleading contracts, and a system of sponsorship by which migrants are bound to their employers. The workers typically hand over their passports to the boss and can't leave the job or the country without permission. In the face of this criticism the government and the country's World Cup committee said they'll fix things.

The Georgetown students were skeptical.

"There should be a great feeling of responsibility, and I think often the government is investigating the problem," said Noor, a freshman who is Qatari. But, she added, "I don't think it's possible to not have known about the problem. I think a lot of the problems arise from government policy and giving all the power to one person who is your brother or your brother's friend."

Sara, a student from Oman, said the companies that bring the workers to Qatar also bear responsibility.

"It's not purely the Qatar government's fault," she said. "It's these companies, the way they operate, they trick [the workers], they put them into debt, they come here and they're basically stuck." 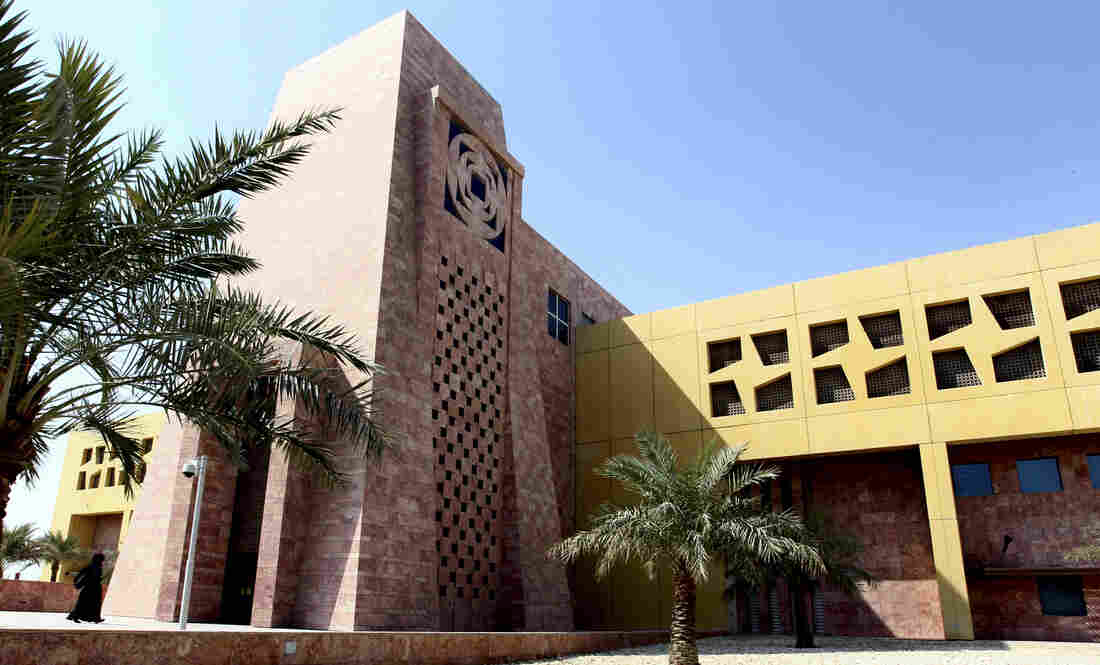 The Texas A&M campus is just one of several U.S. institutions that have been established in Qatar in recent years. Osama Faisal/AP hide caption 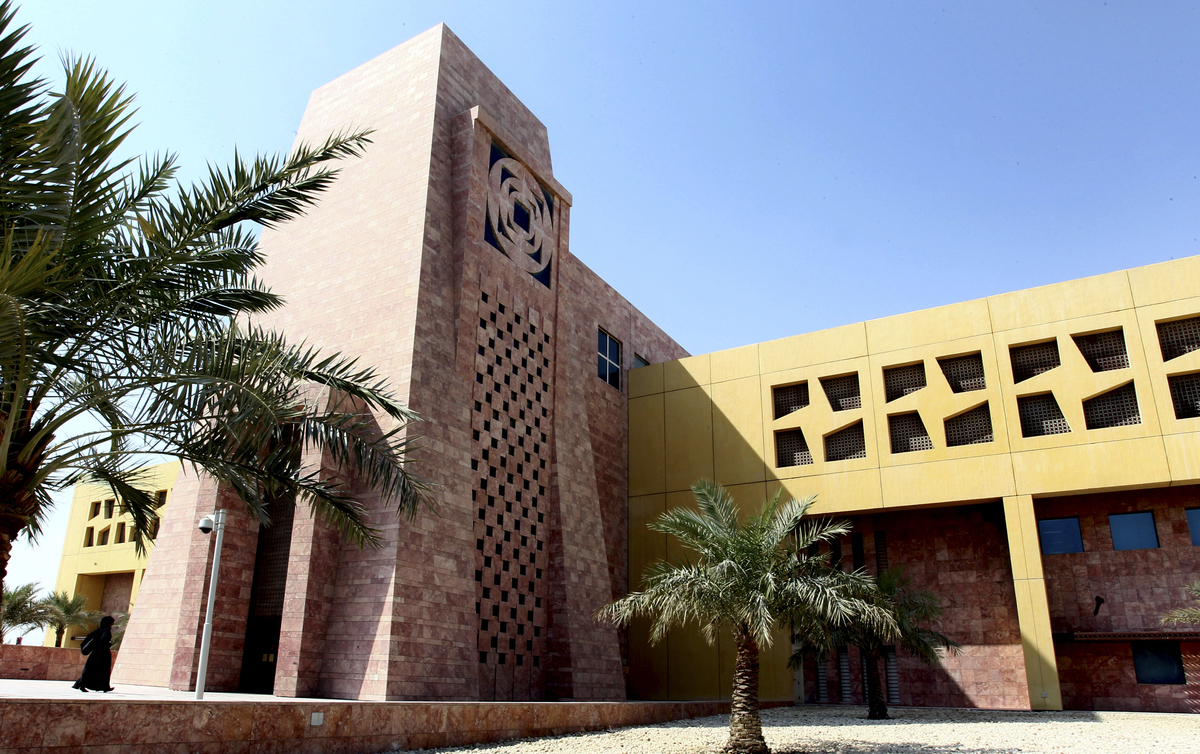 The Texas A&M campus is just one of several U.S. institutions that have been established in Qatar in recent years.

She went on to say that Qatar will have to fix the problem before the World Cup.

"If they want to present an image to the Western world, they have to present Western ideals of human rights," she added.

"I do not agree with the sponsorship program. I do believe it is restricting them from basic rights they should have," he said. "If the worker does not feel content with the place he is working, he should have the right to leave."

"What happens, in 10, 20 years when you have a sizable alumni that have been educated by Georgetown University?" he said. "Do they not ask questions that are inconsistent with a nondemocratic political system?"

Here's another version of the same question. Northwestern's campus in Qatar is devoted to communications and journalism and the program is first-rate. 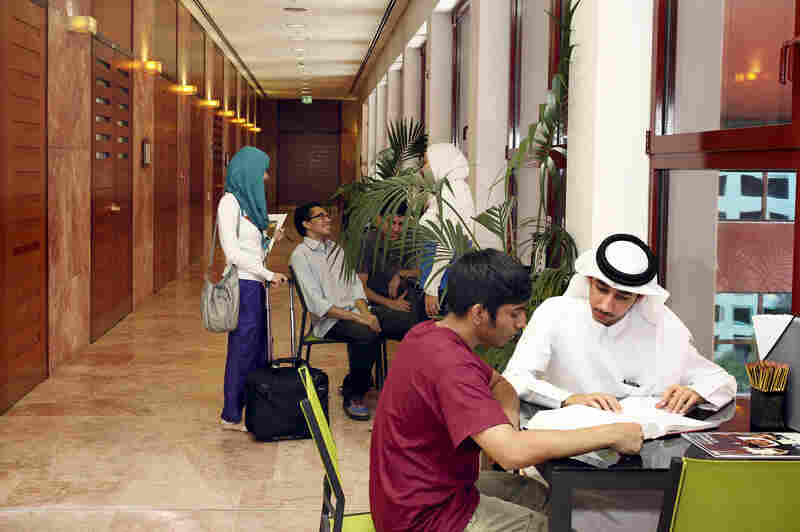 The campus attracts students from throughout the region. Osama Faisal/AP hide caption 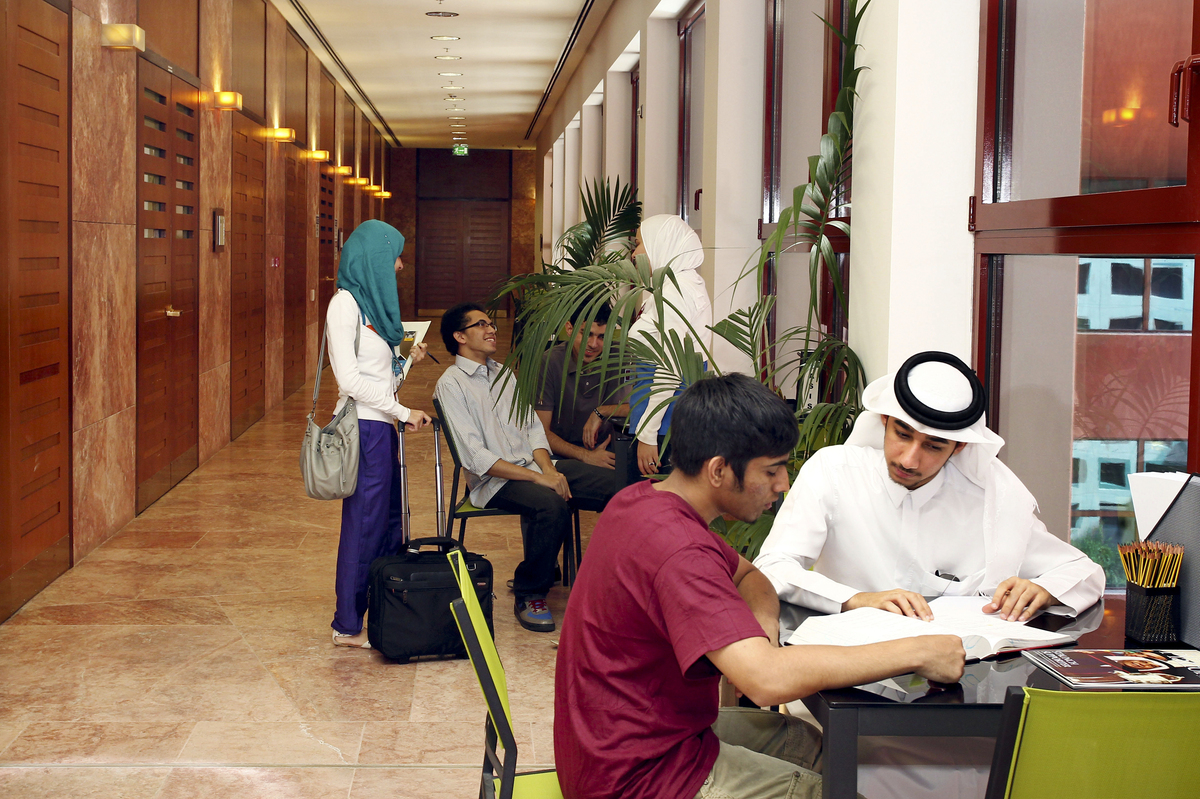 The campus attracts students from throughout the region.

Can Qatar educate young journalists to world-class standards and maintain, what Jan Keulen, a long-time Dutch correspondent in the Middle East, describes as a docile local press.

Keulen says Qatari media observe a red line around some subjects, such as security, religion and the monarchy.

"The real problem is that nobody knows exactly where the red line is, so there's a lot of self-censorship," he said.

A Poet Is Jailed

Keulen was director of the state-controlled Doha Center for Media Freedom until he was fired this year. He says he was given no reason for his dismissal.

It probably didn't help his position that the center publicized the prosecution of a Qatari poet named Mohammed al-Ajami. Ajami wrote a poem expressing the wish that his country's leaders might go the way of other leaders ousted in the Arab Spring.

"Apparently the emir, or members of the royal family, were offended by it. So he was first sentenced to lifelong imprisonment. After appealing, he got 15 years," said Keulen, adding that the case was not reported in the Qatari media.

Having lost his job, Keulen will have to leave Qatar. He, too, is a migrant worker.

Nearly all Qataris are Sunni Muslim and adhere to the conservative Wahhabi school that dominates in neighboring Saudi Arabia.

And while you might not feel that at the cosmopolitan Education City, it's unmistakable at the larger Qatar University where American political scientist Justin Gengler is a researcher. The campus is segregated. Separate buildings for men and women. In the co-ed library building, the elevators are segregated.

"When we step in [the elevator], there will be buttons that say, 'men's floor,' 'women's floor,' 'men not allowed." Very alarmist signage," he said.

How Tiny Qatar 'Punches Above Its Weight'

Talk Of Political Reform, But No Action

There have been setbacks in Qatar's top-down drive to modernize. A few years ago, the country imposed English as the language of instruction. But very low test scores have led it to re-introduce Arabic as at least an option. That's a step in favor of tradition.

What about the tradition of the monarchy or eagerness for political reform?

Gengler's research suggests that eager is too strong a word.

For example, the monarchy has promised an elected local legislature, a Shura Council, for years.

"One of the questions we asked was, 'If the Shura Council were elected, would it be a good thing or a bad thing?' And something like 98 percent of the people said it would be a good thing," he said.

But since elections have always been postponed, what does that 98 percent favorable rating mean?

"It doesn't mean that I'm willing to sort of fight, to put myself out there to advocate that. Yeah, if it happens, great. If not, you know, we'll sort of see," he said.

There are reasons for that lack of urgency. Gengler says the government and the ruling al-Thani family, opaque as their decision-making may be, feel the pulse of the people.

For example, conservative Qataris were appalled by public drinking at the posh Pearl development where well-heeled expats live. So, it was banned. No need for public hearings or legislation.

And as Kamrava points out, the Qatari college student who finds his country's political institutions stifling soon becomes a college graduate with a stake in the status quo.

"Oftentimes we end up with alumni at age 21 or 22 that graduate from these American branch campuses and get multiple job offers earning more money than someone like me makes," he said. "As a result, they get absorbed into the economic mainstream in a kind of way that doesn't leave any time for political questions to be asked."