Accessibility links
Syria's War Creates A Demand For Artificial Legs : Parallels Before Syria's civil war, there was no real need for a clinic that could teach the disabled how to walk on artificial legs. Now there's huge demand, not only for the legs, but also for training. 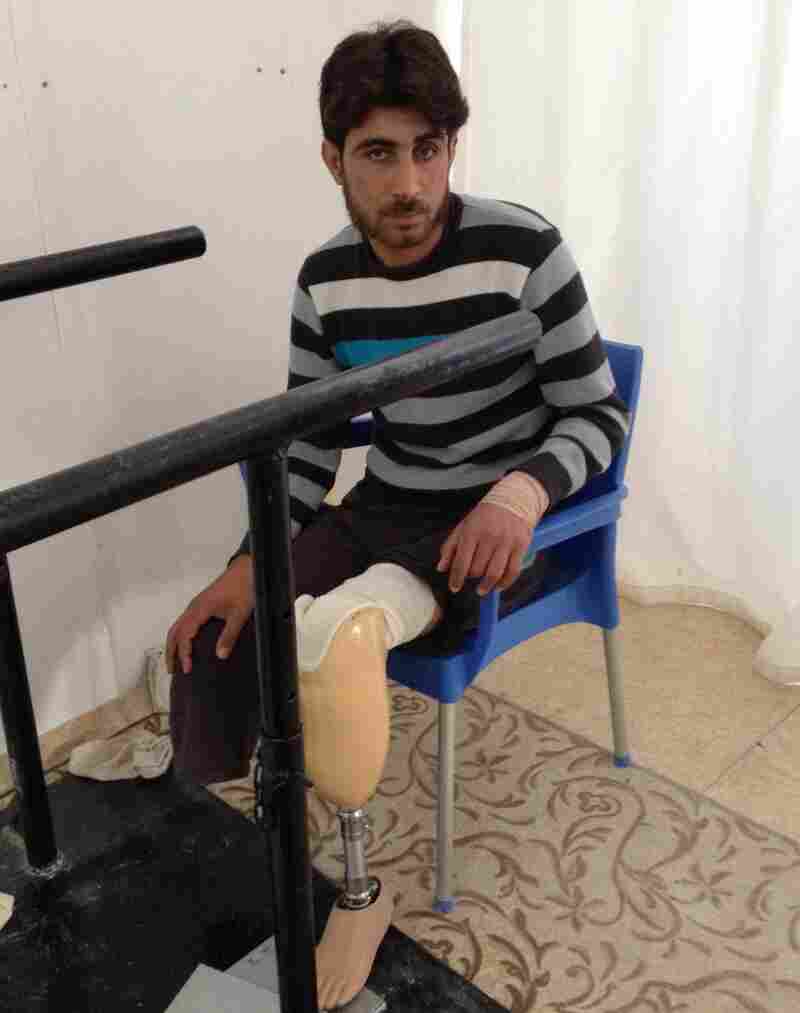 Syrian Mustapha Abu Bakr, 23, who was wounded in his country's civil war, prepares to take his first steps on prosthetic legs at a clinic in southern Turkey. The Syrian war has created a great demand for artificial limbs. Deborah Amos/NPR hide caption 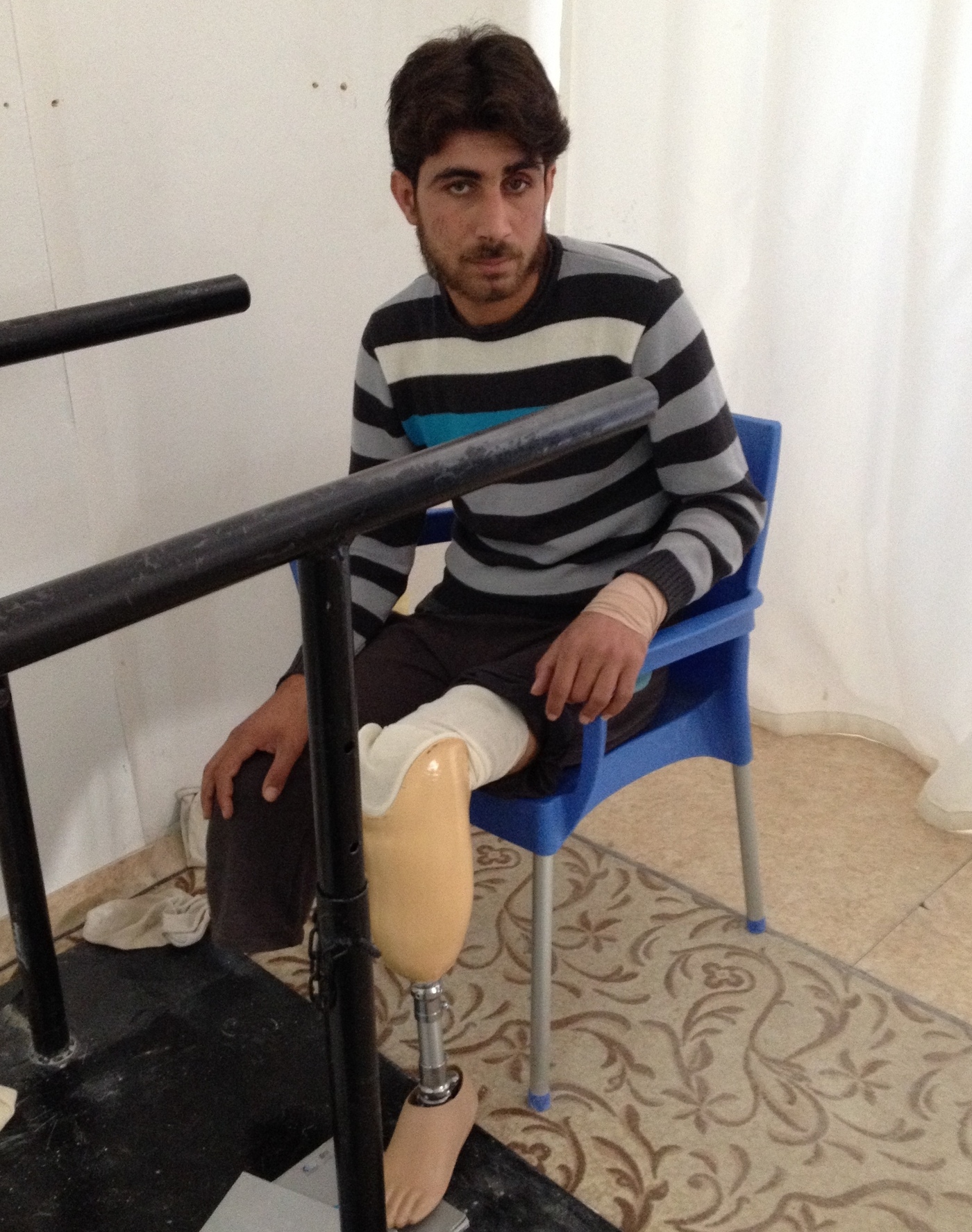 Syrian Mustapha Abu Bakr, 23, who was wounded in his country's civil war, prepares to take his first steps on prosthetic legs at a clinic in southern Turkey. The Syrian war has created a great demand for artificial limbs.

In a clinic in southern Turkey, Mohammed Ibrahim helps 23-year-old Syrian Mustapha Abu Bakr take his first steps since he lost his legs, holding on to a set of bars for balance.

"He can't express his feelings," Ibrahim says. "It's a new thing completely for him."

Ibrahim explains that patients who have lost a leg below the knee can walk out of the clinic without crutches after a day of practice. For double amputees like Abu Bakr, who was injured in Syria's civil war, the adjustment takes more time.

Ibrahim, a Jordanian with hospital experience in working with amputees, recently joined the staff of this workshop, which fits wounded Syrians with new prosthetic legs.

The death toll in the Syrian conflict is generally estimated at something over 100,000. Now the International Committee of the Red Cross estimates half a million have been wounded, with many victims lacking access to basic health care and treatment. The war has also left many Syrians physically handicapped, and some have crossed into Turkey for treatment.

This clinic in Reyhanli, near the Syrian border, has fitted more than 300 patients with artificial limbs. There are more than 600 Syrians on the waiting list, with thousands more still inside Syria who have been handicapped during the war. The staff here say they can produce 50 artificial limbs a month, more when they can raise the funds.

Patients Of All Ages

The youngest patient is 12-year-old Mayssa, her leg sheared off by a shell that killed her sister. Two young men are also here for fittings: one a former cook turned rebel fighter, the other a farmer who lost his legs after he stepped on a land mine. The fitting can take up to three weeks.

When the clinic opened in February, Syrian doctors from a U.K.-based charity ordered a mass-produced prosthetic leg known as the Jaipur leg, which was developed in India and gave patients only limited mobility. Raed Al-Masri, who runs the clinic, wanted something better.

"No one has experience or expertise with artificial limbs," Masri says. "There was no big demand in Syria for this type of technology." 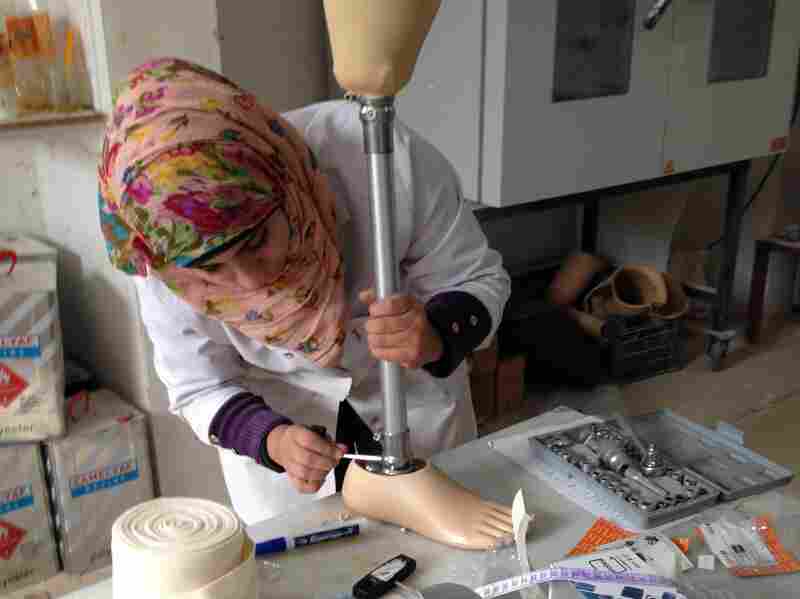 A staff member at the clinic in southern Turkey works on a prosthetic leg that will be given to a victim of Syria's civil war. Deborah Amos/NPR hide caption 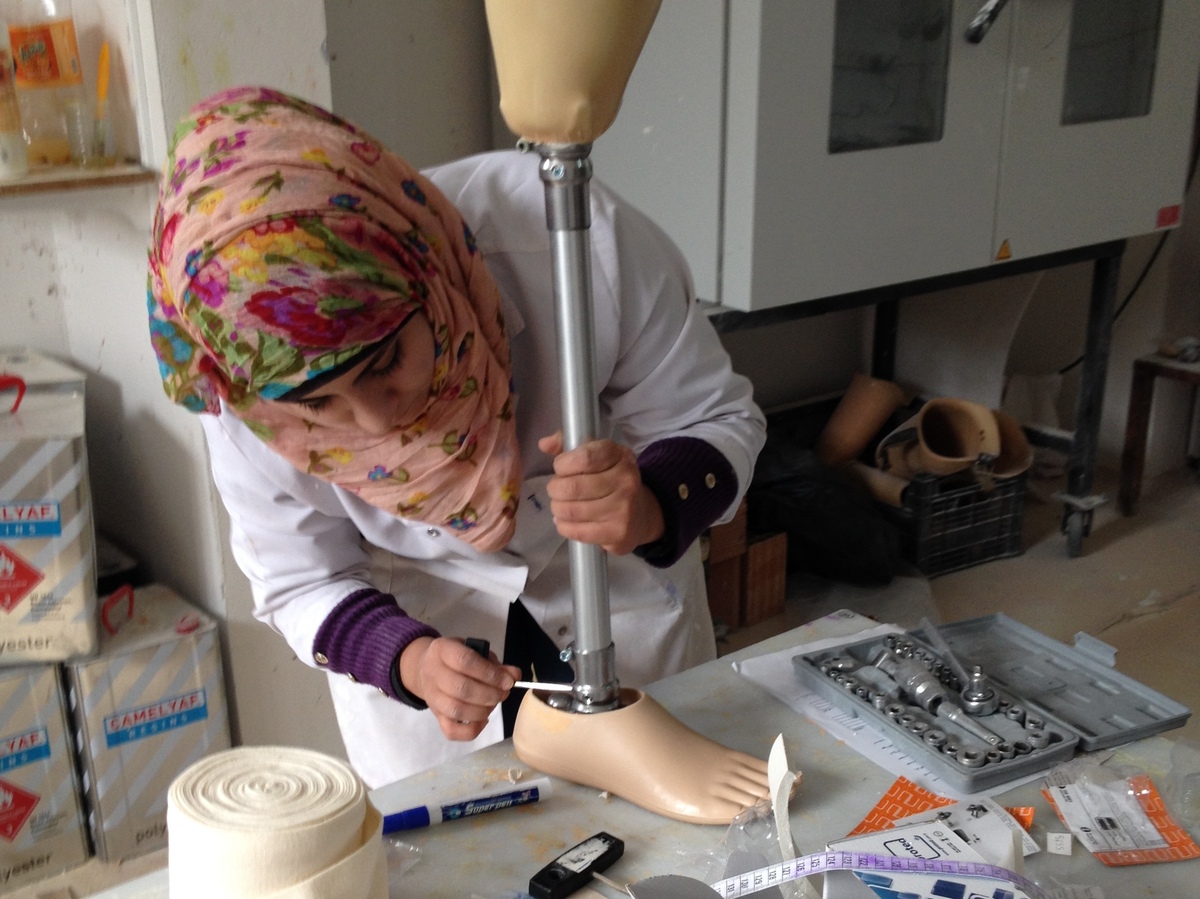 A staff member at the clinic in southern Turkey works on a prosthetic leg that will be given to a victim of Syria's civil war.

Over the months, the workshop team learned quickly — making improvements on the Jaipur leg, and adding a knee joint and a flexible ankle. But the artificial foot is still ordered in bulk.

There is also a cabinet full of feet that come in a range of sizes, including tiny ones for kids. Masri says many children with war wounds have been treated here, with their youngest patient just 15 months old.

For double amputee Abu Bakr, the adjustment takes time, but he's off to a good start, according to Ibrahim.

Abu Bakr gains confidence with each step. He walks until he tires. He will have to come back for more fittings as his body adjusts. He says his first walk felt weird, but he smiles at the accomplishment.

"For the past three months, I thought I would never walk again," Abu Bakr says. "Now, for the first time, I feel like I will be able to walk."