Accessibility links
Weird Stuff World Leaders Give Each Other : Parallels U.S. Secretary of State John Kerry recently gave Russia's foreign minister a couple of Idaho potatoes. That's just the latest in the pantheon of gifts to world leaders — from camels to bulletproof limos — where, no really, the giver shouldn't have. 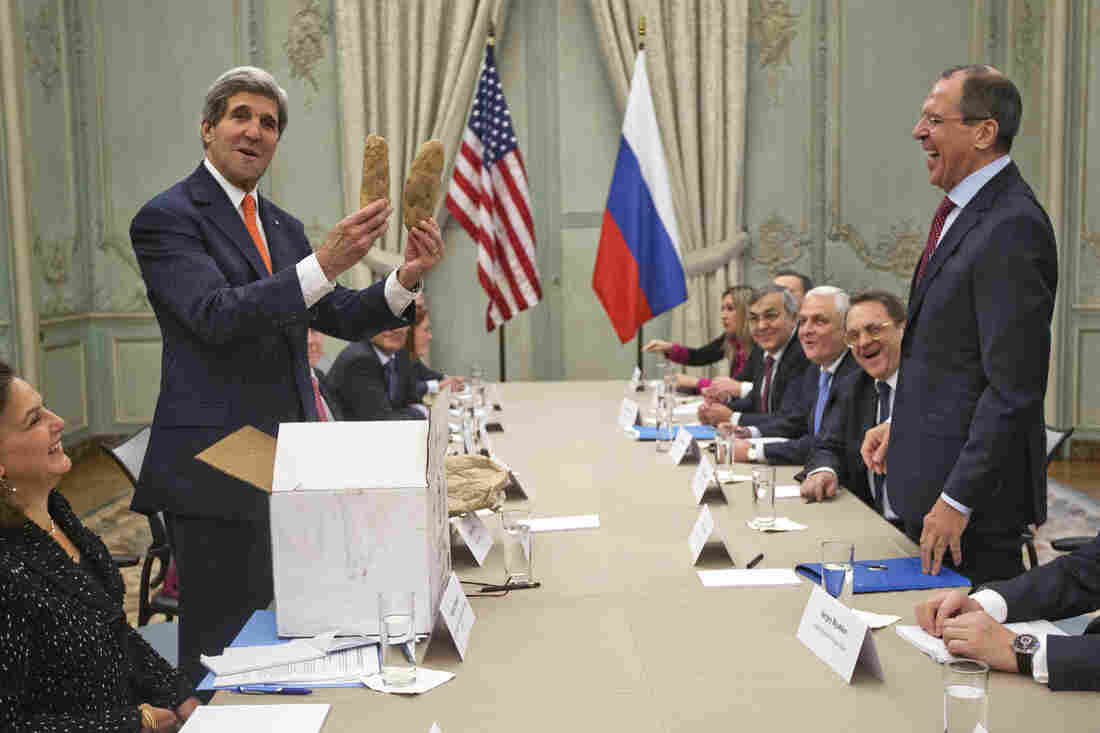 U.S. Secretary of State John Kerry holds up a pair of Idaho potatoes as a gift for Russia's Foreign Minister Sergei Lavrov, standing right, at the start of their meeting at the U.S. Ambassador's residence in Paris on Monday. Pablo Martinez Monsivais/AP hide caption 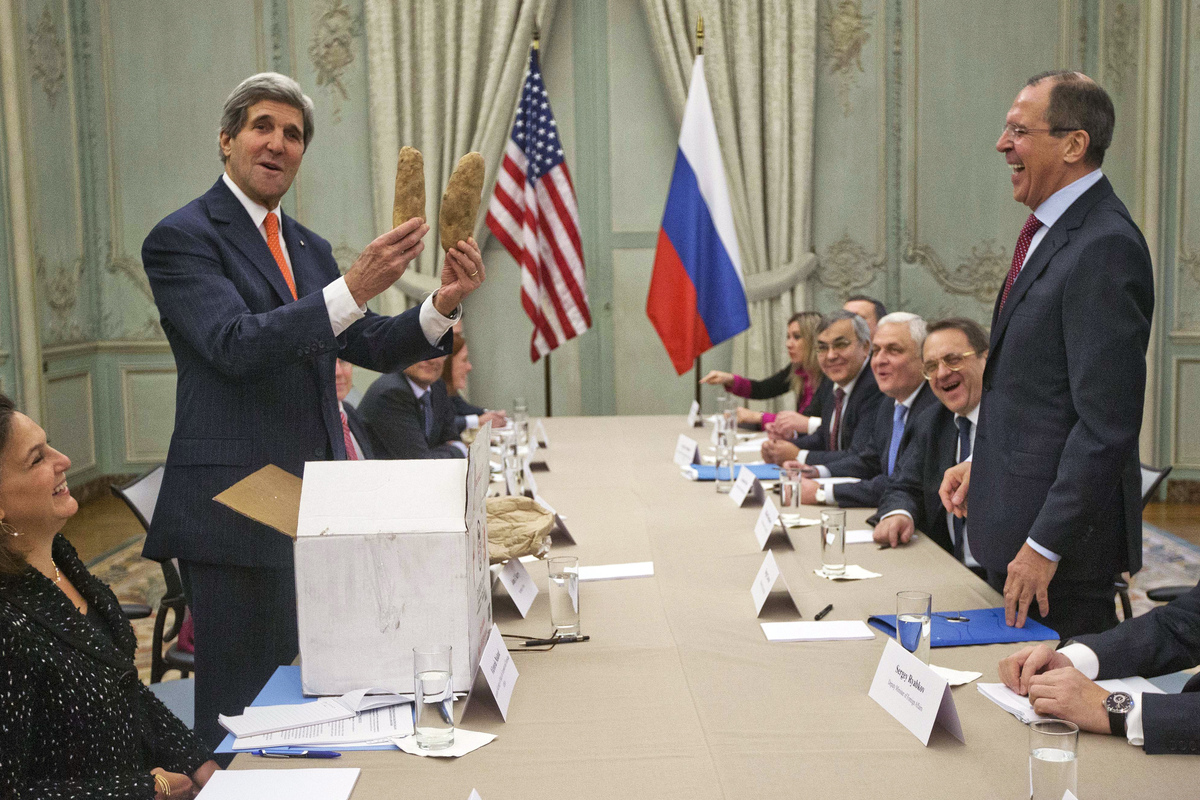 U.S. Secretary of State John Kerry holds up a pair of Idaho potatoes as a gift for Russia's Foreign Minister Sergei Lavrov, standing right, at the start of their meeting at the U.S. Ambassador's residence in Paris on Monday.

You say potato, John Kerry says let's give it to Russia.

The U.S. secretary of state proudly presented his Russian counterpart, Foreign Minister Sergei Lavrov, with two Idaho potatoes at a meeting in Paris on Monday. It was the gift that kept on giving, a) because Kerry's spokeswoman got a rather nice pink hat out of it, and b) because we got multiple photos of two of the world's most powerful diplomats clutching oversized tubers.

A pair of humble spuds not your idea of a gift fit for a statesman, perhaps? Well, compared to the bizarre junk world leaders usually give each other, Lavrov's potatoes are probably the most useful gift he'll get all year.

Here's a rundown of the strangest stuff clogging up ministerial desk drawers the world over. 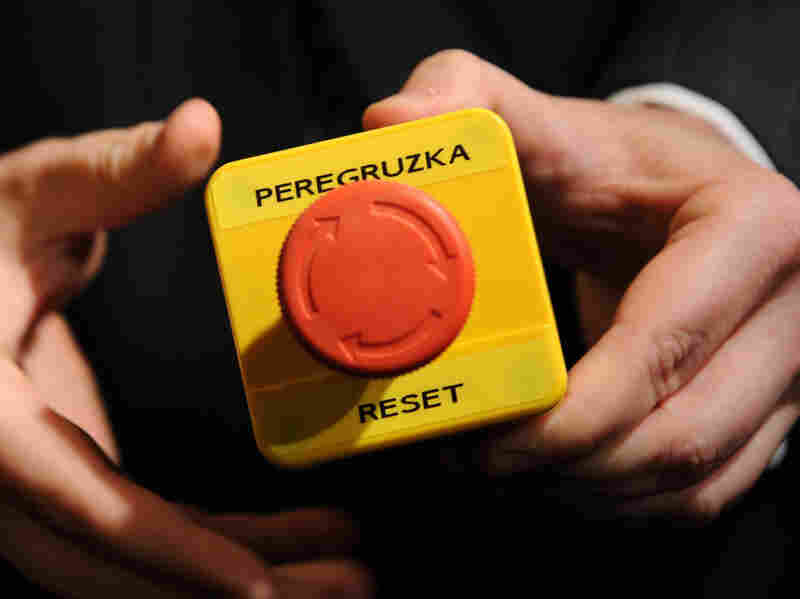 An assistant shows the block with a red button marked "reset" in English and "overload" in Russian that U.S. Secretary of State Hillary Clinton handed to Russian Foreign Minister Sergei Lavrov during a 2009 meeting in Geneva. Fabrice Coffrini/AFP/Getty Images hide caption 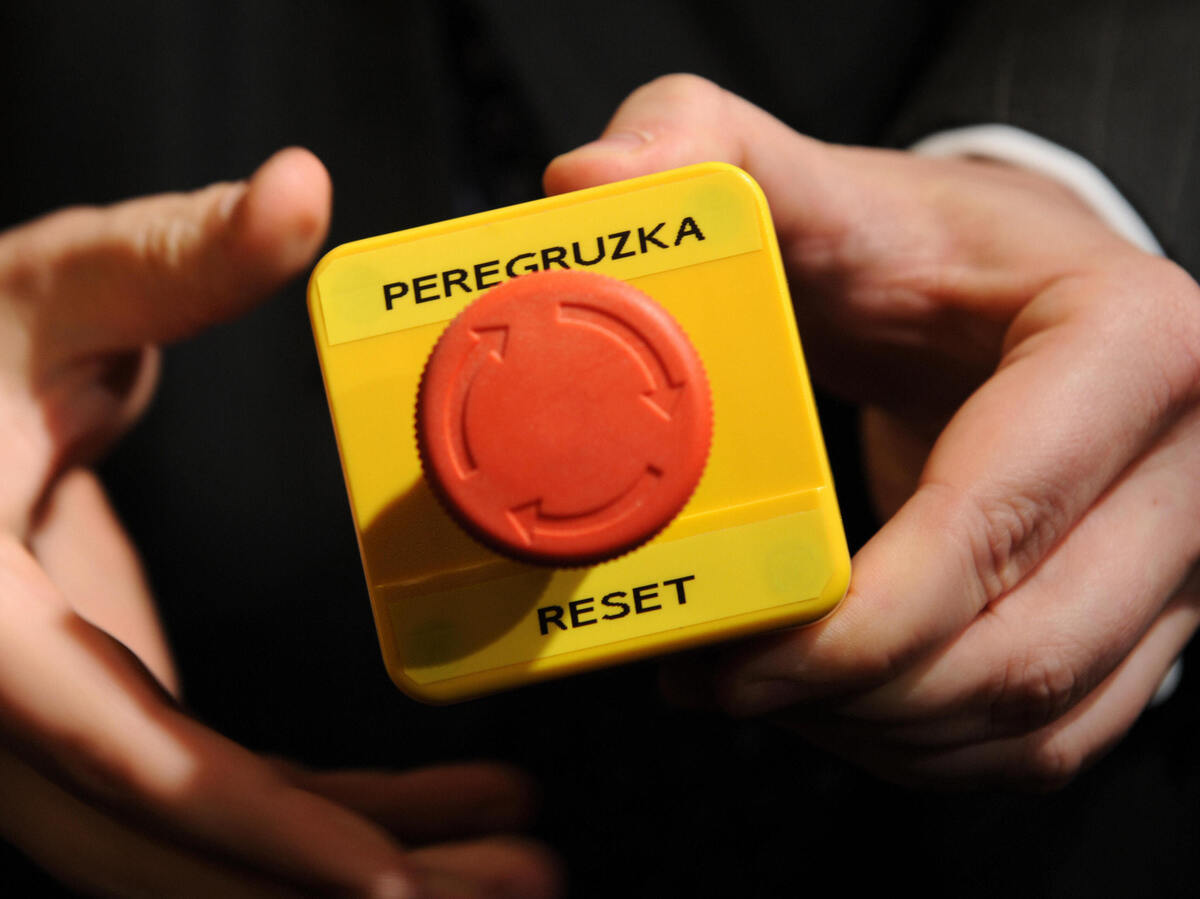 An assistant shows the block with a red button marked "reset" in English and "overload" in Russian that U.S. Secretary of State Hillary Clinton handed to Russian Foreign Minister Sergei Lavrov during a 2009 meeting in Geneva.

It wasn't the first time Sergei Lavrov had to do his best to look grateful for a screwball gift from the United States. In 2009, then Secretary of State Hillary Clinton handed him a cartoonish red button with the word "reset" on it, which was intended to symbolize Washington's will to draw the line under its past tensions with Moscow. The only trouble was, whoever made the button didn't know their Russian: they mistranslated "reset," as Lavrov coolly pointed out in front of a crowd of reporters, instead choosing the Russian word for "overloaded." We suspect the gift went straight in the Kremlin's trash.

2. Colombia to the U.S.: A giant coffee bean

But my personal favorite has to be the "silver figure representing oversized coffee bean" given by Colombia's president, Juan Manuel Santos, in April 2013. It now languishes somewhere in the National Archives and Records Administration. 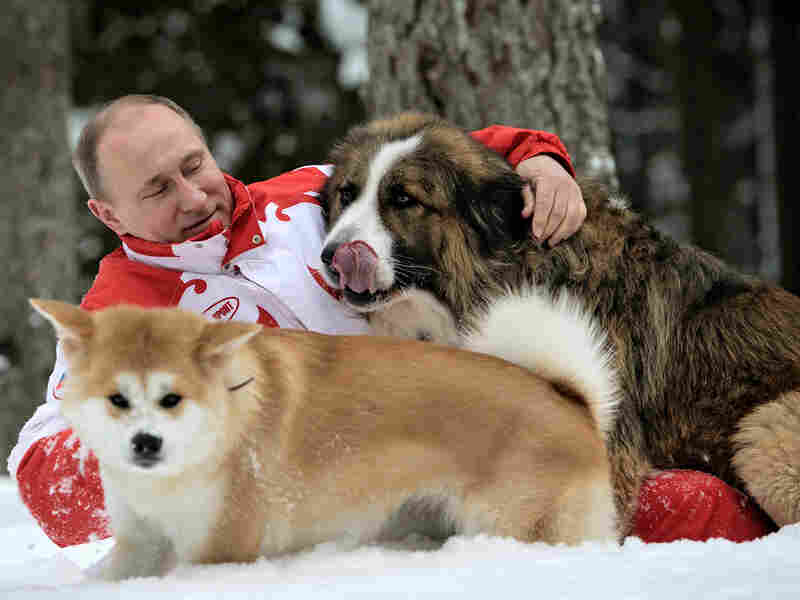 Russian President Vladimir Putin plays with his dogs Buffy (right) and Yume at his residence Novo-Ogariovo, outside Moscow on March 24, 2013. Bulgarian shepherd dog Buffy was presented to Putin by his Bulgarian counterpart Boyko Borisov, while Japanese Prime Minister Yoshihiko Noda offered Putin the puppy Yume as a gift during the G20 in Mexico in June. Alexsey Druginyn/AFP/Getty Images hide caption 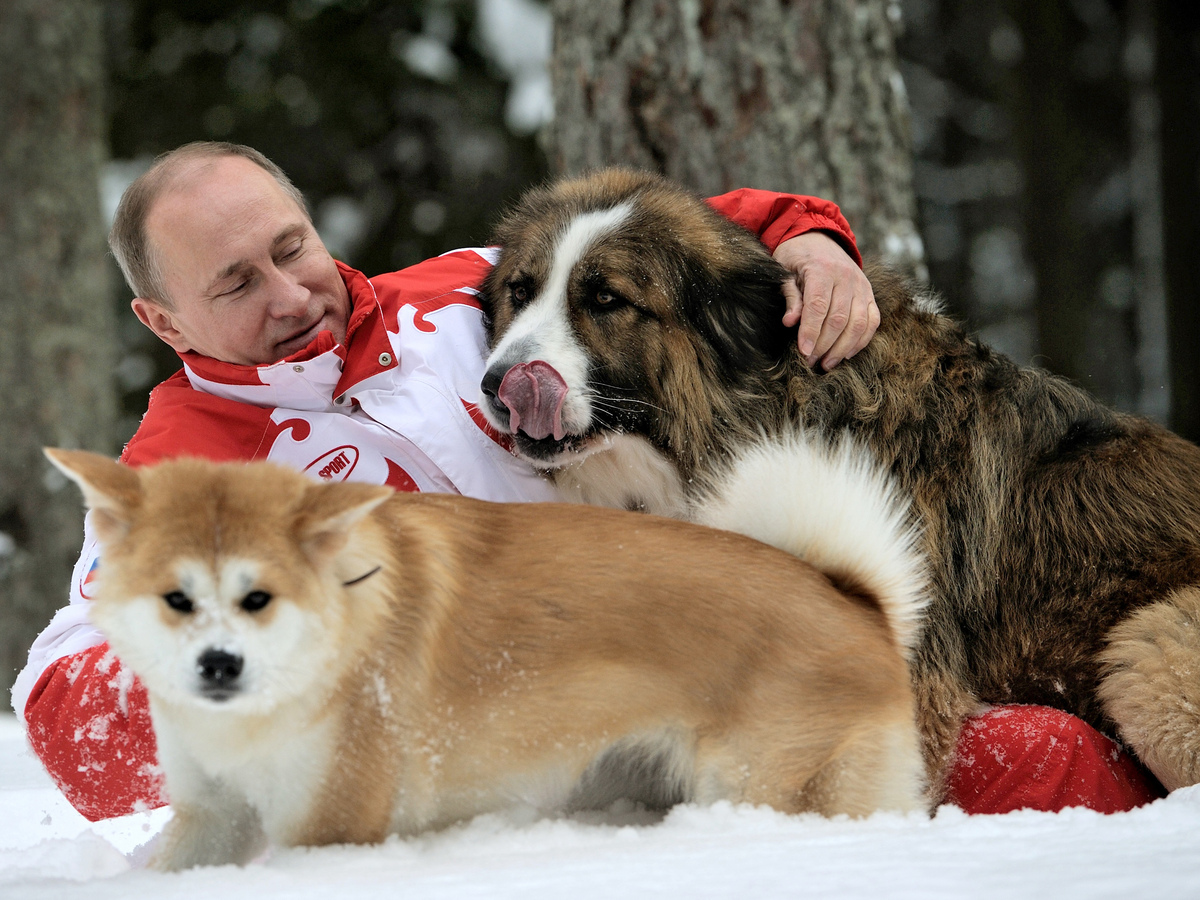 Russian President Vladimir Putin plays with his dogs Buffy (right) and Yume at his residence Novo-Ogariovo, outside Moscow on March 24, 2013. Bulgarian shepherd dog Buffy was presented to Putin by his Bulgarian counterpart Boyko Borisov, while Japanese Prime Minister Yoshihiko Noda offered Putin the puppy Yume as a gift during the G20 in Mexico in June.

3. Bulgaria to Russia: Buffy the dog

Russian President Vladimir Putin stands out as the recipient of some legitimately excellent state gifts. The most excellent by far is Buffy, a Bulgarian shepherd given to Putin in 2010 as an impossibly adorable 10-week-old puppy by the then prime minister of Bulgaria, Boyko Borisov.

Lucky Putin has also received a black labrador (from a Russian army general), an Akita (from Japanese officials), and a tiger (he wouldn't say who it was from, but he gave it away to a wildlife reserve).

This infamous gift was revealed by Donald Rumsfeld in his 2011 memoirs. In 1983 he visited Iraq as the United States' special envoy to the Middle East, whereupon Saddam Hussein welcomed him with a present of a blurry three-minute video that, Hussein claimed, was proof of the barbarity of his then enemy, Syrian President Hafez al-Assad.

The footage — which we don't recommend watching — purports to show young Syrian recruits biting the heads off snakes and stabbing puppies to death, all under the approving eye of Assad himself. Gee ... just what no one ever wanted, ever.

5. Mali to France: One unlucky camel

Sadly for the camel offered to Francois Hollande in gratitude for his country's assistance driving out Islamist militants in Mali last spring, the French president decided there was no room for the bad-tempered creature at the Elysee. He left it in the care of a Malian family instead, only to find that they promptly cooked it in a stew.

When Iran presented the head of Russia's air force with a model of an American surveillance drone in October 2013, it was really giving it — or, more accurately, sticking it — to the United States. The Iranian military insisted it was proof that it had indeed shot down the unmanned aircraft one year earlier, a claim that the U.S. disputed.

It's not clear what Russia did with its fake drone, but a miniature plastic version made its way into Iranian toy stores for the equivalent of $4 a pop. The makers even offered to send one to the White House, though it's not clear whether it ever made it into Obama's toy box.

What does one loony dictator do when he fancies building a personal zoo? Why, he simply checks his Rolodex of loony dictator friends and calls the one in the most exotic location.

That, or something like it, is how Robert Mugabe came to agree, in 2010, to send pairs of some of Zimbabwe's rarest animals to Kim Jong Il in North Korea. Zimbabwean authorities got as far as packing up the first of the wild elephants, giraffes, rhinos, zebras and monkeys they planned to send to their probable doom before international outcry from conservationists forced Mugabe to call off the deal.

Zimbabwe's gift may not have made it to the garrison kingdom, but literally hundreds of others did. So many, in fact, that North Korea built a whole museum filled with nothing but the booty sent to Kim Il Sung, Kim Jong Il and most recently, Kim Jong Un. Among the highlights at the "International Friendship Exhibition Hall" in Pyongyang is an armored limo gifted to Kim Il Sung by none other than Soviet leader Josef Stalin, who presumably knew just what to get for the authoritarian ruler who has everything.

Other items on display include a sword and several chessboards sent by late Libyan dictator Moammar Gadhafi, an entire train car from China's Mao Zedong, a crocodile-skin briefcase from Cuba's Fidel Castro and, in pride of place, a basketball autographed by Kim Jong Il's favorite NBA star Michael Jordan and offered by the United States in 2000 as a gesture of goodwill.

Why people feel the need to keep giving stuff to one of the richest women alive is beyond us, but it seems Queen Elizabeth II can't step out of Buckingham Palace without being showered with ill-advised gifts. Every time she visits Fiji, for example, the South Pacific island's chiefs present her with a tabua, or sperm whale's tooth, traditionally their society's highest prized treasure. The Queen has at least three of them — not to mention the shark's tooth sword she picked up in nearby Kiribati.

Other presents we assume have gone untouched by royal hand include a pair of cowboy boots offered by the United States in 1991; more recently, an iPod stocked with show tunes courtesy of President Obama; 500 cases of canned pineapple sent as a wedding gift by Australia; enough exotic animals to fill a small menagerie; and the world's ugliest wine cooler (thanks, France!).

But even her loot can't compare to the trophies offered her husband, Prince Philip, by the jungle village of Tanna on the island of Vanuatu, whose inhabitants worship him as a god (really). In their time they've offered him pigs, a club to kill pigs, and even the local costume — a sort of G-string made from long grass, which, regrettably, the prince was unable to model in person.