Accessibility links
Expected Flow Of Bulgarians, Romanians Raises Hackles In Europe : Parallels On Jan. 1, workers from the two countries became free to move across the EU in search of jobs. But the prospect of new workers from two of the bloc's newest and poorest members has prompted fears of "poverty migrants" – especially in Britain and Germany. 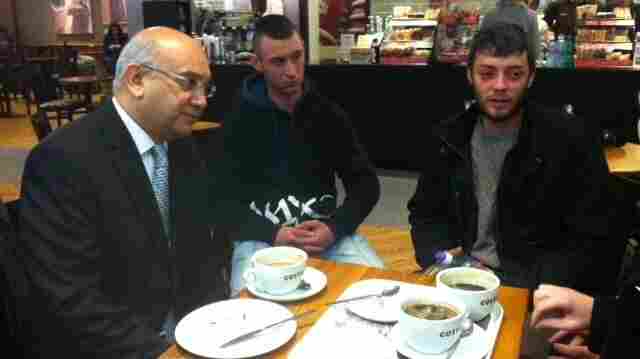 Keith Vaz, a British member of Parliament and chairman of the home affairs select committee (left), greets arrivals at Luton Airport, including Victor Spirescu (right) on Wednesday. The first Romanians and Bulgarians with unrestricted access to the U.K. labor market have begun to arrive despite last-ditch efforts to prevent a feared wave of fresh immigration. Jennifer Cockerell/PA Photos/Landov hide caption 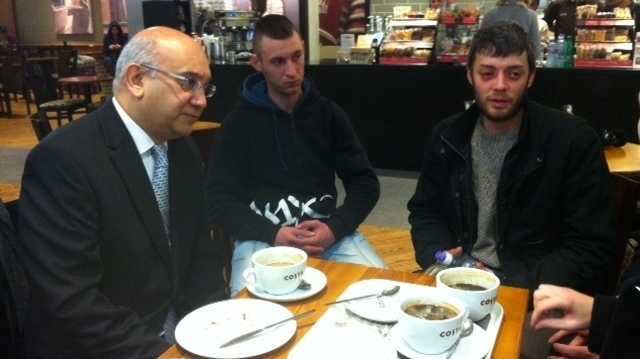 Keith Vaz, a British member of Parliament and chairman of the home affairs select committee (left), greets arrivals at Luton Airport, including Victor Spirescu (right) on Wednesday. The first Romanians and Bulgarians with unrestricted access to the U.K. labor market have begun to arrive despite last-ditch efforts to prevent a feared wave of fresh immigration.

Over the New Year's holiday, Bulgarians and Romanians became free to move across the European Union in search of jobs as the bloc's last labor restrictions were lifted. As we've previously told you, the prospect of a flood of workers from two of the EU's newest and poorest members has prompted fears of "poverty migrants" — especially in Britain and Germany.

Indeed, some of the first Romanian workers who arrived in the U.K. were greeted by two lawmakers and a horde of reporters.

One of them, Victor Spirescu, a construction worker, was asked if he had a job. He replied: "Yes. I go to work. Tomorrow I work."

He said he earned about $13.65 a day working in Romania; in the U.K., he said, he hoped to earn that in an hour. And, he added, with the money, he wanted to "renovate my home and make a good life in Romania, because it's much easier to live in Romania because it's not expensive."

The Guardian reported that when Keith Vaz, chairman of the home affairs select committee, and Mark Reckless, a committee member from the Conservative Party, went to Luton Airport — where Spirescu arrived — "to see for ourselves" the steps in place on the first day of unrestricted access for workers from the two countries:

"what they found was a plane three-quarters full, with the overwhelming majority of the 146 passengers returning to jobs in the U.K. having enjoyed Christmas break with their families at home. No mass stampede, this."

The ruling Conservatives had made reducing immigration a key election pledge, and Prime Minister David Cameron has imposed restrictions on the benefits these new migrants can access.

Still, immigration remains a sensitive issue in the U.K. Some of the fears stem from the flow of people into the country following the previous EU expansion in 2004. At the time, the government said it expected tens of thousands of Poles; instead more than 500,000 turned up.

Not everyone is against the end of the restrictions. The Economist, in an open letter to the citizens of Bulgaria and Romania, noted: "The going will be rough at first. But the history of many waves of immigration tells us that, before too long, you will be folded comfortably into British society."

In Germany, A Political Debate

A similar debate over the newcomers and access to benefits is being played out in Germany.

The Bavarian Christian Social Union, allied with Chancellor Angela Merkel, says "everything needs to be done to prevent" the new migrants coming to Germany to live on social welfare and child benefits.

But, as part of a coalition government, the center-left Social Democrats runs the country's Foreign Ministry. And Frank-Walter Steinmeier, the foreign minister and a member of the party, criticized the comments.

"European freedoms are the core of our idea of Europe; free movement of workers is an essential part of European integration," he told the German daily Sueddeutsche Zeitung.

Those who study migration into Germany have dismissed fears of a mass influx of people from the two newest EU members.

What's Behind The Furor?

Bulgaria and Romania joined the EU in 2007, but the rights of their citizens to work and claim benefits across the bloc were restricted for the first seven years of their membership. But, as the BBC notes, officials in both countries have long said that fears of a flood of their workers are overblown, as many of those who wanted to leave have already done so.

More than 3 million Romanians live abroad, according to the Organization for Economic Cooperation and Development; and Deutsche Welle reports that 17 percent of Bulgarians are thinking about leaving for other EU states in search of jobs.

Still, as The New York Times reported, "A look at income data shows why Bulgarians and Romanians might continue to seek greener pastures." Here's more:

"Obviously, this does not necessarily mean that being poor in Britain, France or Germany is better than being in the top income bracket in Bulgaria or Romania: The cost of living is vastly lower in Sofia than in London.

"But the lure of higher pay cannot be ignored when barriers come down, particularly as Bulgaria's unemployment has increased sharply over the last half-decade."