Accessibility links
As Costs Soar, Who Will Pay For The Panama Canal's Expansion? : Parallels The canal is being widened to handle much larger ships. But after five years of building, the project is expected to cost at least $1.6 billion more than planned. The builders and the canal operators both say the other side should pay. 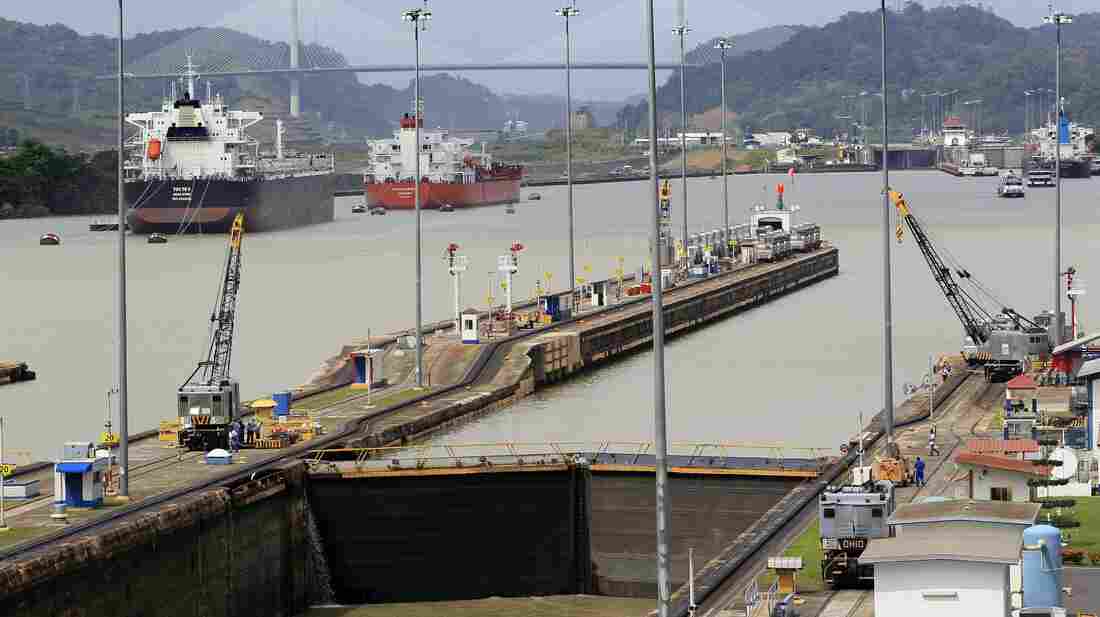 A view of the Panama Canal last Thursday. The canal is being widened to accommodate larger ships, but the builders and the canal operators are locked in a dispute about who will pay the higher-than-expected costs to finish the project. Alejandro Bolivar/EPA /Landov hide caption 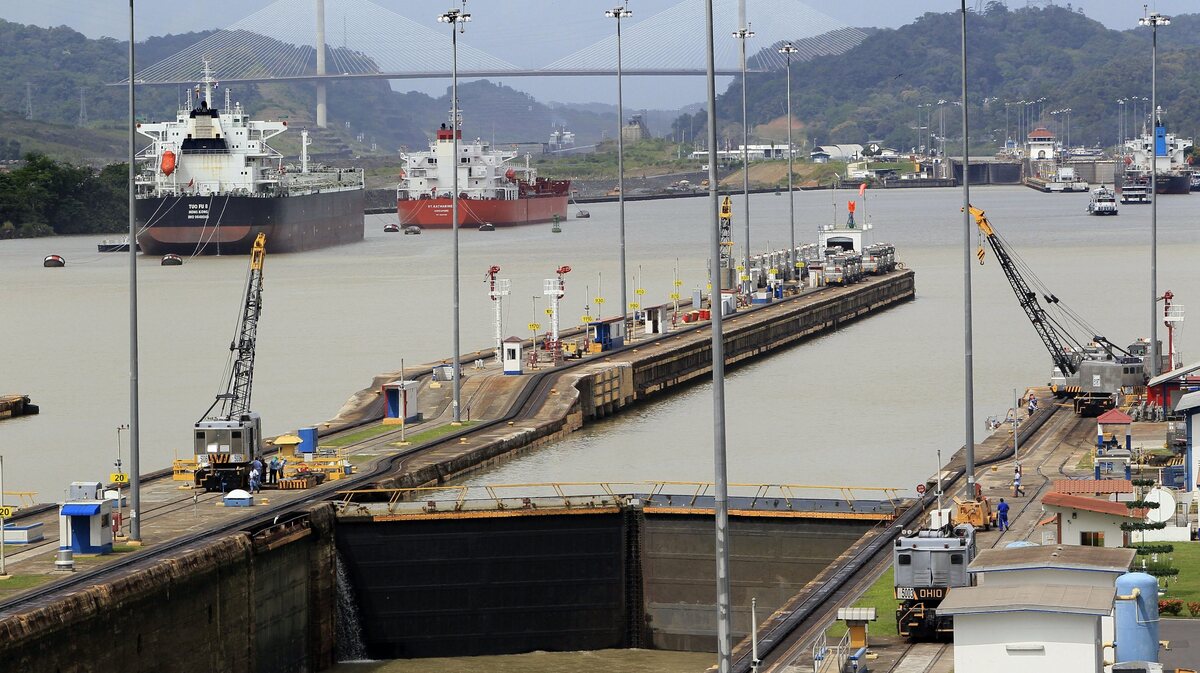 A view of the Panama Canal last Thursday. The canal is being widened to accommodate larger ships, but the builders and the canal operators are locked in a dispute about who will pay the higher-than-expected costs to finish the project.

For five years, a multibillion-dollar expansion has been underway on the Panama Canal so that ships three times the current size can pass through the vital waterway. The new, wider canal will alter global trade routes and dramatically increase revenue for Panama's government, primarily from toll charges.

The expansion is more than two-thirds done, but now a funding dispute between the builders and the canal operators threatens to bring construction to a halt.

A mostly European building consortium called GUPC issued an ultimatum saying it would suspend work on the project unless Panama's government ponied up an extra $1.6 billion to help cover cost overruns.

Pedro Alonso, a spokesman for Sacyr, the Spanish company heading the project, says there were many unforeseen problems that forced up the cost.

"For example, the exact quality of the stone, and certain geotechnical things that weren't documented ... the depth of different layers of earth," said Alonso. Those are things beyond the consortium's responsibility and "should be covered by the client," he added. 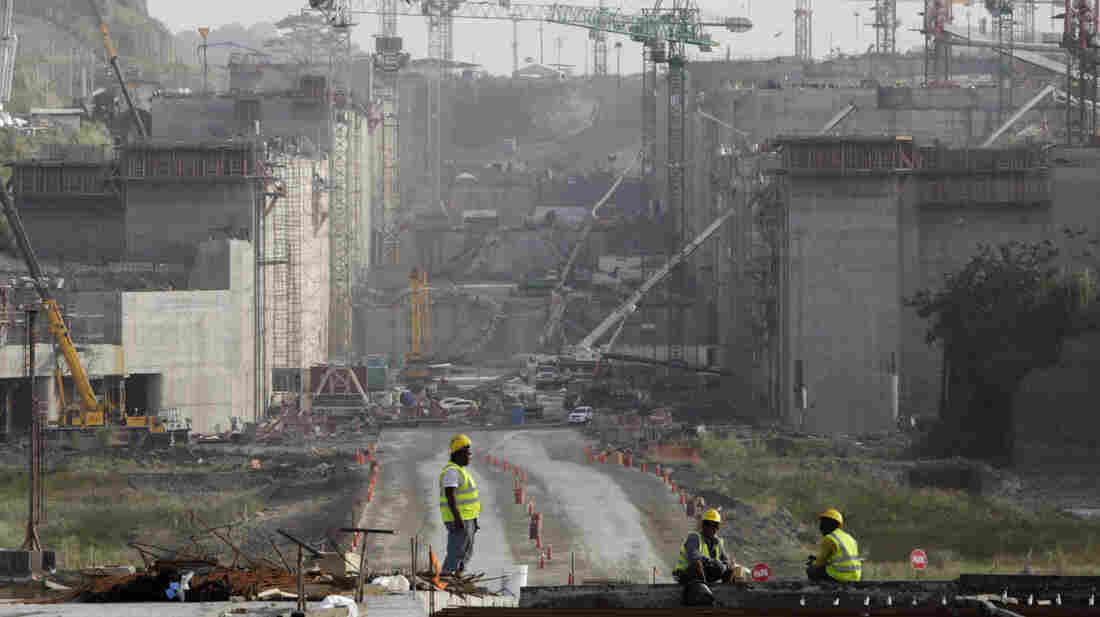 Workers at the construction site of the Panama Canal expansion project on the outskirts of Colon City, Panama, on Tuesday. Carlos Jasso/Reuters /Landov hide caption 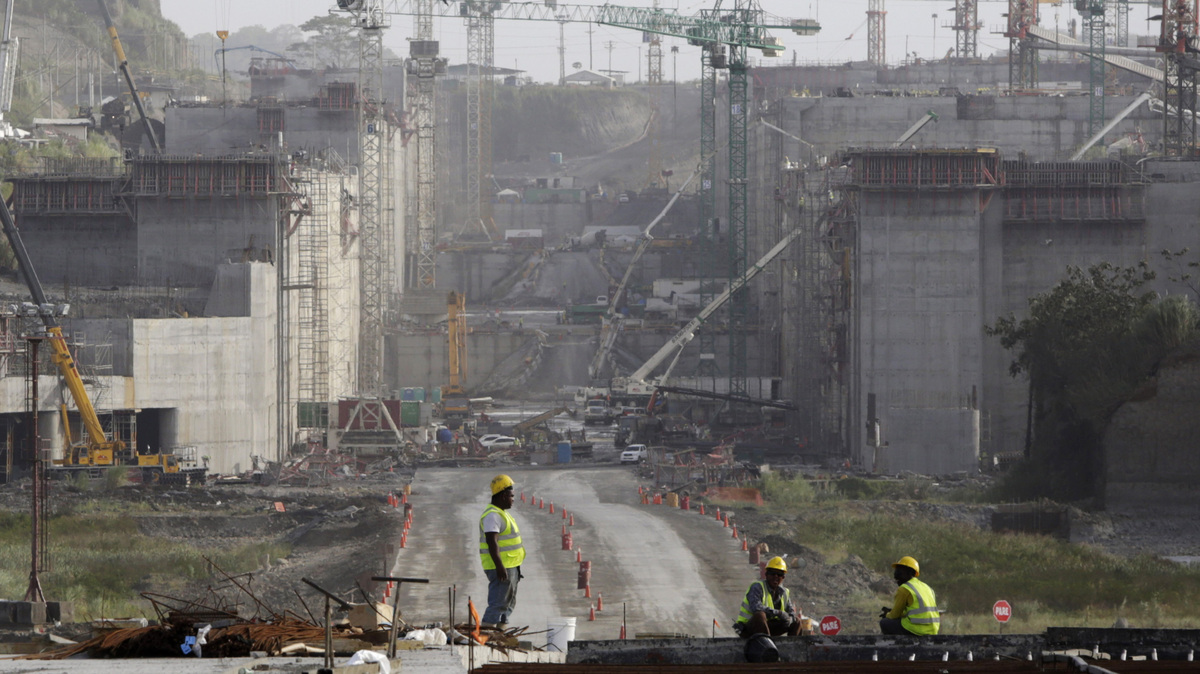 Workers at the construction site of the Panama Canal expansion project on the outskirts of Colon City, Panama, on Tuesday.

Questions About The Original Contract

But there have long been questions about whether the GUPC underbid the contract.

Hackett Associates, which provides research and analysis to the international maritime industry, did an analysis of the cost estimate for the expansion plan when it was being bid in 2008. CEO Ben Hackett says that usually when companies bid for massive, expensive projects of this nature, they tend to be optimistic.

"Typically when you have large infrastructure projects, there is usually a delay in most cases ... and where there are delays, there will ultimately be cost overruns," he said.

The Panama Canal Authority, which operates the waterway, says the builders should have taken that into account.

Jorge Quijano, the head of the Panama Canal Authority, says the GUPC has made many claims since the start of the project and that the authority has already paid close to $180 million above the contract price for things like the rising cost of fuel, steel, cement and employee payrolls. Quijano said the canal authority is seeking a solution.

"The problem is most of the time we've not been able to come to terms with them because their numbers have been blown out of proportion," he said.

On Tuesday, both sides offered their own joint funding proposals to allow work to continue for several months until a permanent solution can be found. The canal authority proposed a $283 million funding package of which it would pay $183 million and the GUPC would kick in the rest.

However, the building consortium also proposed that it pay $100 million, if the canal authority ponied up $400 million. The negotiations remain stalled.

Cato Stonex, with THS Partners, which has a 5 percent stake in the project, says the dispute must be resolved.

"It's an extraordinary passage, and obviously widening it allows that capacity to expand dramatically," he said. "It's a particularly unique and important project, which I'm sure all parties to the project want to be concluded satisfactorily."

"It will not stop," he said. "Let me tell you, this expansion will be completed with GUPC or without them."