Accessibility links
From The Trenches To The Web: British WWI Diaries Digitized : Parallels The British National Archives is posting 1.5 million pages of World War I diaries online. The personal accounts provide new insight into the lives of the troops who fought the war that began 100 years ago. "Everywhere the same hard, grim, pitiless sight of battle and war," reads one entry. 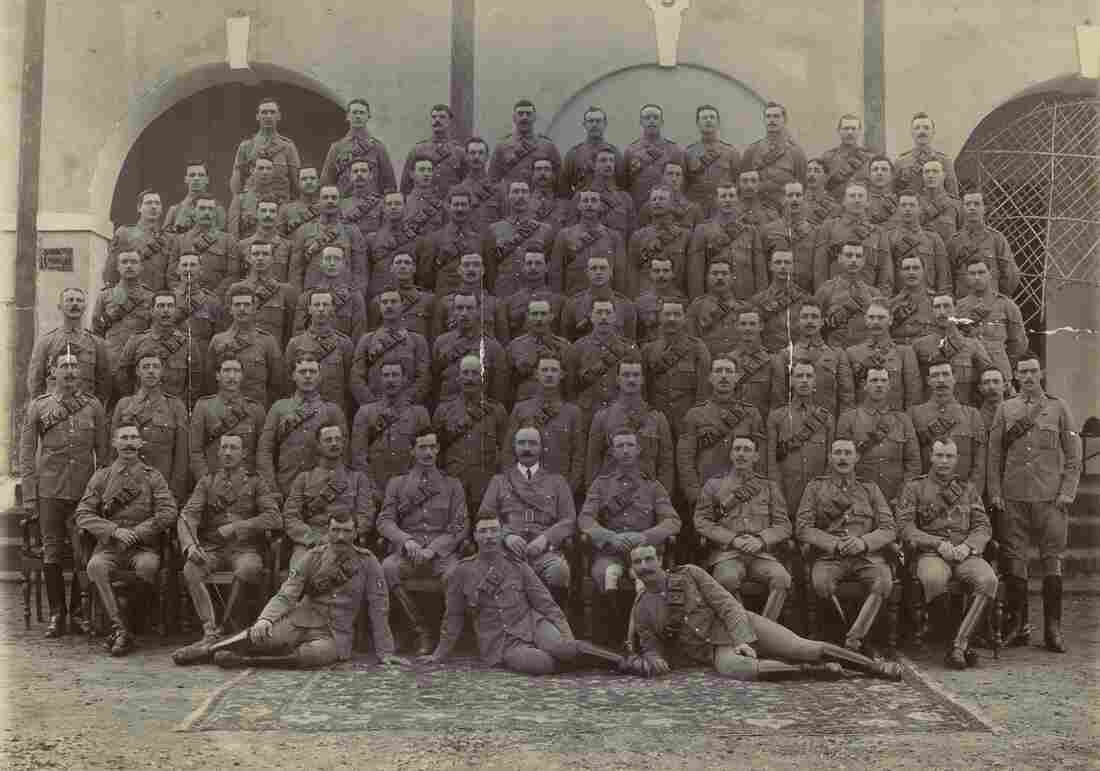 The British National Archives has digitized and posted online about 1.5 million pages of diaries from soldiers and units that fought in World War I. Here, a photo of the 12th (Prince of Wales') Lancers Group. From a private collection, provided courtesy of the National Archives hide caption

toggle caption
From a private collection, provided courtesy of the National Archives

On the outskirts of London, in a basement room of the British National Archives, a historian delicately turns pages that have the brittle feel of dead leaves. Each is covered in text — some typewritten, some in spidery handwriting from a pen that scratched across the page 100 years ago.

"Saturday, the 26th of September, 1914," reads one. "The most ghastly day of my life. And yet one of my proudest, because my regiment did its job and held on against heavy odds."

This diary was written at the start of World War I. It's one of 1.5 million pages in the archives' collection. In honor of the war's centenary, archivists have now begun to make the entire collection available online.

"All the hedges are torn and trampled," reads another page. "All the grass trodden in the mud. Holes where shells have struck. Branches torn off trees by explosions. Everywhere the same hard, grim, pitiless sight of battle and war. I've had a belly full of it."

That entry, from Capt. James Patterson, was written on Sept. 16, 1914. It ends: "I must try and write to my mother now." Patterson died six weeks later.

Personal journals like Patterson's make up a small part of this collection. Most of this trove consists of official diaries, recording the day-to-day activities of British army units in the first world war. The scale of death is huge. Nearly a million British soldiers died in the war, half of them on the Western front in France and Belgium. 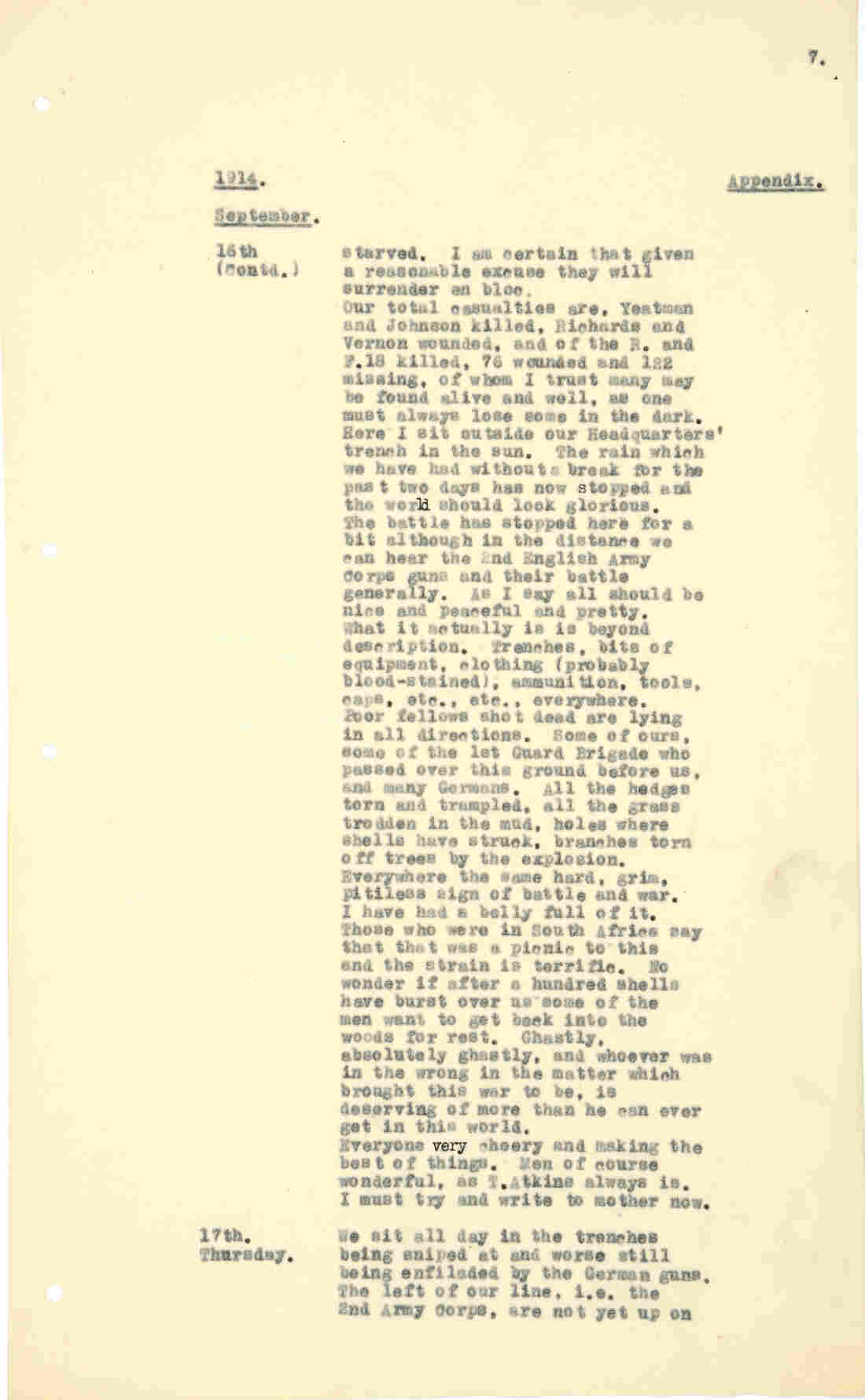 In this excerpt from his diary, Capt. James Patterson writes about his experience and reflections on the first battles of Marne and Aisne. His diary ends abruptly on Oct. 25, and he died of his wounds on Nov. 1, 1914. /British National Archives hide caption

The daily routine was not all explosions and gunshots. These diaries include cold, clinical descriptions of marches, and of boredom. Sometimes they record sports, says historian William Spencer.

"It's usually soccer," he says. "So for example, the first day of the Battle of the Somme, the first of July 1916, at least one regiment are known to have advanced towards the enemy kicking a football [soccer ball]."

"If you want to get your people pointing in the right direction," says Spencer, "you kick a football over the top, and they followed it."

Caroline James was an amateur family historian before she recently began working at the archives. Reading these accounts, she says, "really does change how you feel about it. I suppose they're no longer just images in photographs."

James unearthed the story of one of her own relatives in the World War I diaries, a man named Charles Alfred Hunt. She says that experience changed her perception of the war.

"You think, those were real men. They had mums, they had brothers and sisters and girlfriends and wives and children," James says.

The diary entry for the day her relative died sounds almost clinical.

"After a tiring march at 11:30 PM, B squadron captured a German car," the passage reads. "Casualties: 2nd Lt RFT Moore and 11 men missing." 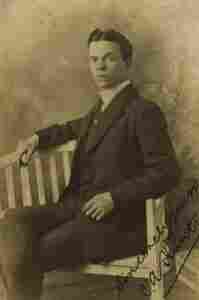 Caroline James, an amateur family historian who recently went to work for the British Archives, unearthed the story of one of her own relatives, Charles Alfred Hunt, in the World War I diaries. Courtesy Caroline James hide caption

One of those 11 men was her great-great-uncle. He died less than two weeks after arriving in France, at age 26.

Many older people in Britain knew veterans of World War I. But the diaries provide a different level of detail, says Michael Brookbank, 84. On a recent day, he was drinking a coffee in the archives cafeteria. He had come to learn more about his father.

"My father very rarely talked about the war, and I think that is common with most of the veterans of the war," says Brookbank. "The experiences that they went through and the conditions that they lived in were just something that, unless you were actually there, nobody could really comprehend."

Now that the diaries are online, anyone in the world can read them. At Operation War Diary, the British National Archives is recruiting what it calls "citizen historians."

It's a way of crowdsourcing the research, so people at home can classify and tag some of the 1.5 million pages. Of course, these diaries only tell one side of the story.

Spencer, the historian, hopes that someday Germany digitizes its remaining World War I diaries. That way, he says, someone would "be able to just pick a given day, say, in the autumn of 1918 and look at that one day through the records of all the belligerent parties."

Spencer imagines soldiers from Britain, America, France and Germany, each telling the same 100-year-old story from their own point of view.