Accessibility links
Spain Exits Bailout In A Sign Of Progress, Not Full Recovery : Parallels Spain's banking system is officially marking the end of its reliance on bailout loans from Europe — only the second eurozone country to do so. Although the banking system may be on surer footing, the overall economy — with youth unemployment pushing 60 percent — still has a long way to go. 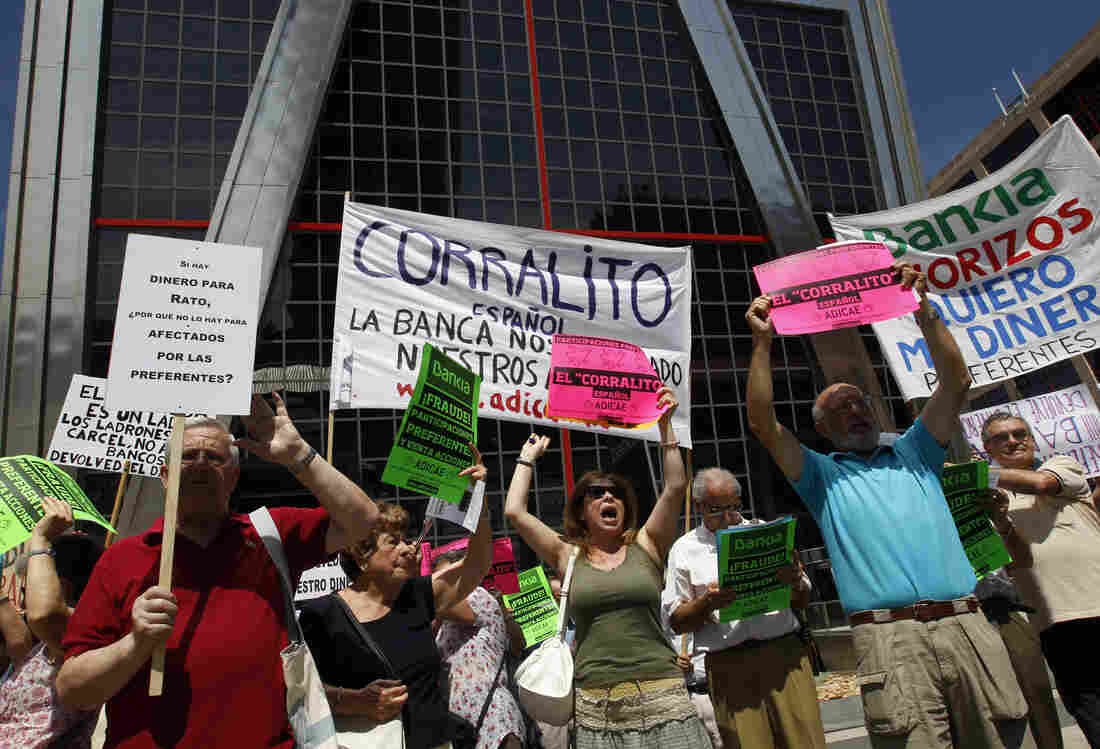 Shareholders protest bank practices at the headquarters of Spain's largest mortgage lender, Bankia, in Madrid on June 23, 2012, at the height of the country's banking crisis. Europe stepped in at that time with $56 billion in loans to help the banking system. Andrea Comas/Reuters/Landov hide caption

Spain's banking system on Thursday is marking an end to its reliance on bailout loans from Europe that were desperately needed 18 months ago to shore up its banks after a construction boom-and-bust.

Spain is now the second eurozone country to cleanly exit its bailout program, after Ireland.

It's a dramatic difference from a year and a half ago, when demonstrations erupted outside banks in Spain almost daily. At the time, record numbers of Spaniards were losing their homes in foreclosure. Unemployment soared past 25 percent and kept rising.

Money was flying out of the country. Spanish banks were holding mortgages that would never be paid back after the housing bubble burst. 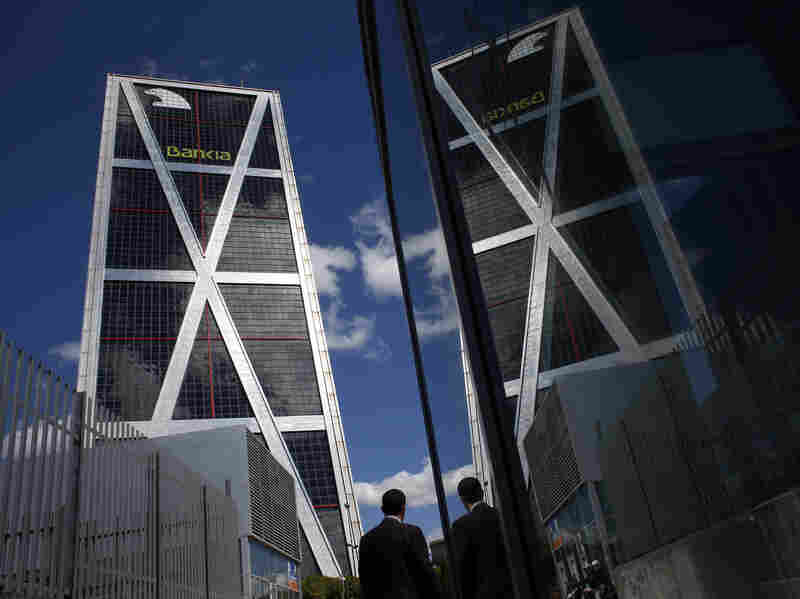 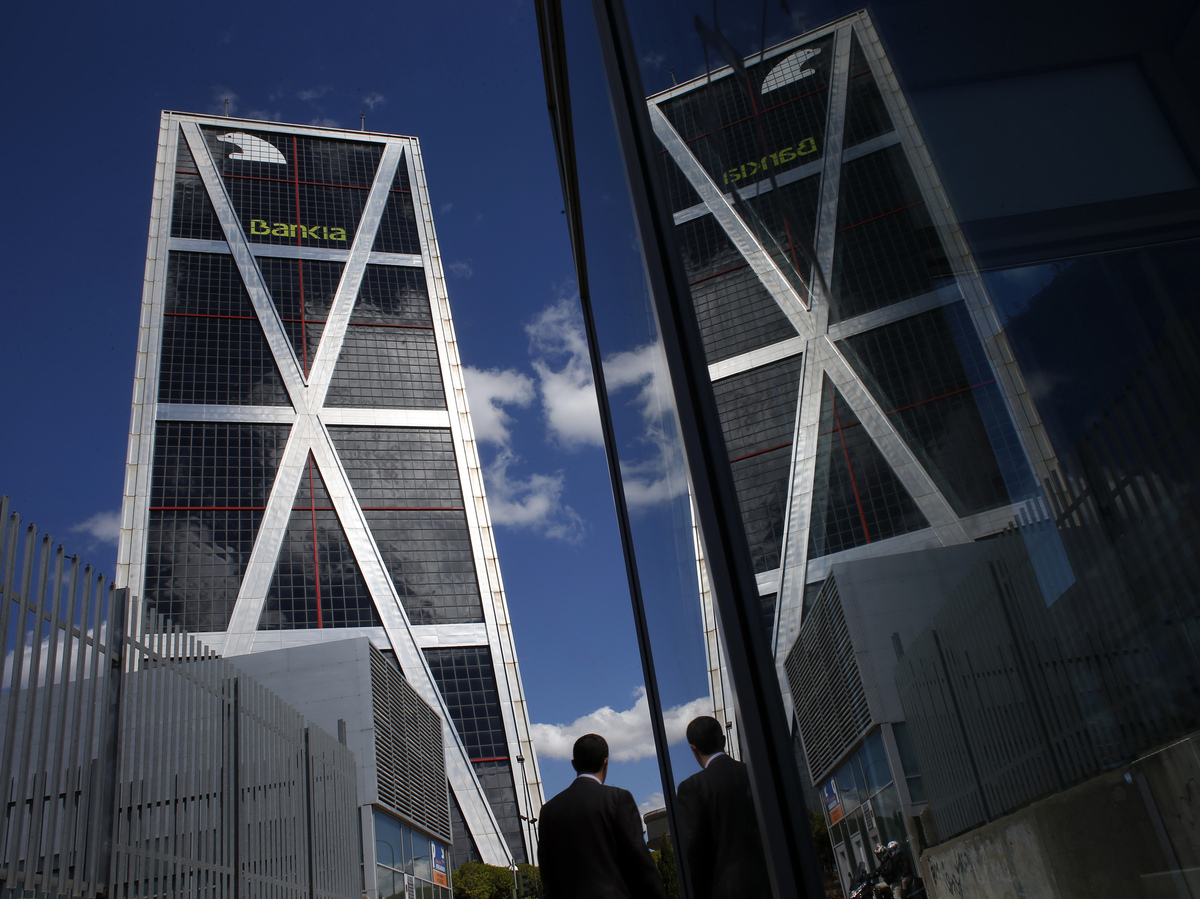 Spain nationalized Bankia in 2012, in response to the country's deepening financial crisis.

The Spanish government nationalized the country's biggest mortgage lender, Bankia, but couldn't afford to rescue them all. So Europe stepped in, with about $56 billion in loans.

"The idea is to kind of stuff the banks full of cash, so that they can finally start taking the losses that they're sitting on," says Megan Greene, the chief economist at Maverick Intelligence in London.

She says that unlike Greece, where the government went broke, in Spain it was the banks. They needed loans from Europe to stay afloat, and cut their losses from the housing crash.

But Greene says the banks haven't dumped their bad debt — and they're hoping they might not have to.

"The big game that politicians and bank CEOs are playing is 'extend and pretend.' If we pretend that our banks are really healthy, then eventually all the assets underlying things on our balance sheets will regain value, and we won't actually have to take such big losses," she says.

"So that's the game everyone in Europe has been trying to play," she continues. "And you know, Spain might get away with it, just because sentiment in Europe generally has improved so much."

The Spanish government is paying lower rates to borrow money. There's confidence it can handle the interest on its debt. The economy is out of recession. And the International Monetary Fund has tripled its growth forecast for Spain this year.

"Foreign capital has come in because Spain is now such a bargain. Because salaries have gone down, values have gone down — asset values," she says. "And the man in the street has borne the brunt of all of that."

And Allard, an American who's lived in Spain for decades, says the view from the street is far less rosy.

"The reality is that one in four people looking for a job can't find one. The young people are leaving the country. Spain has become a net exporter of persons again for the first time in decades. Salaries are down by, I think, 8 percent now," she says. "There's nothing pretty about the picture at home."

So while Spain celebrates the survival of its banking system, thanks to bailout loans from Europe — there's still work to be done on the overall economy.

The most striking statistic: youth unemployment is pushing 60 percent.

The bailout exit means Spanish banks won't tap any more European loans. But they will have to pay back what they've already borrowed, over the next 15 years.