Accessibility links
Brazil's Slaves Are Being Freed, But Owners Go Largely Unpunished : Parallels In the past 20 years, almost 50,000 enslaved Brazilian workers have been freed from some 2,000 work sites. But an estimated 200,000 remain trapped in slavery, owing to deep-seated impunity: Slaveholders can pay hefty fines and civil damages, but criminal convictions and jail time are rare. 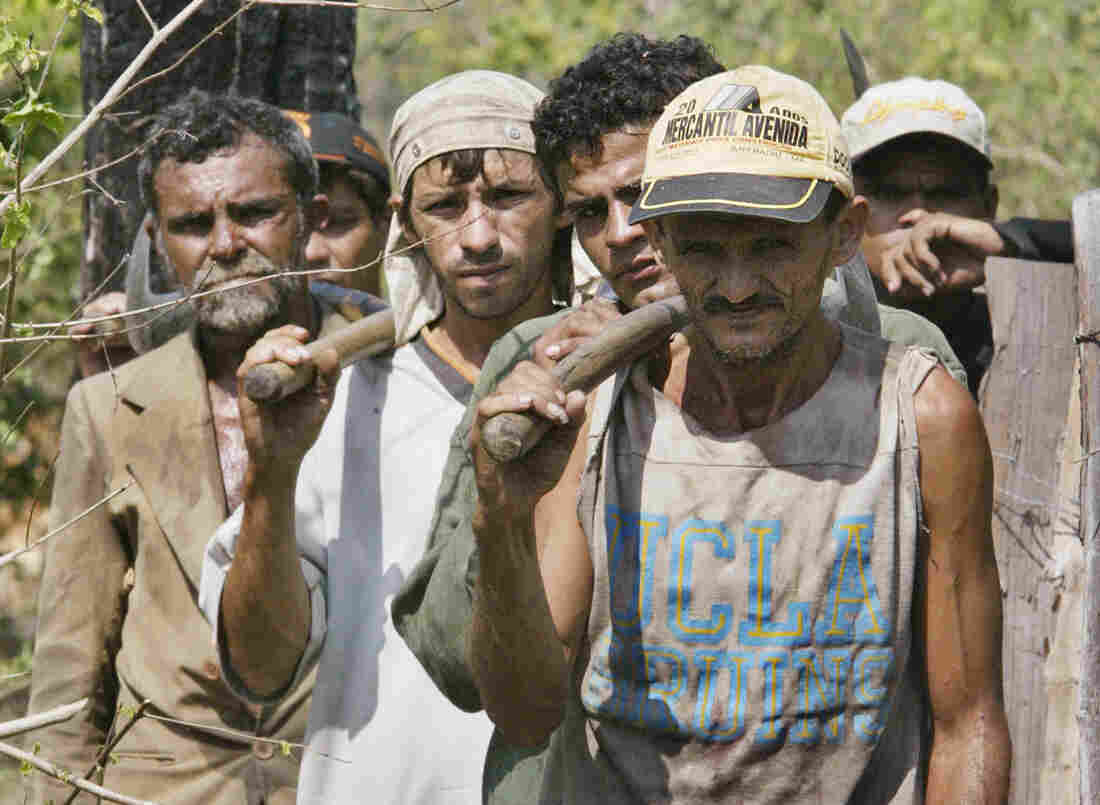 Brazilian slave laborers stop their work to listen to a Labor Ministry inspector explain their legal rights, on the Bom Jesus farm in the Amazon basin in 2003. Rickey Rogers/Reuters /Landov hide caption 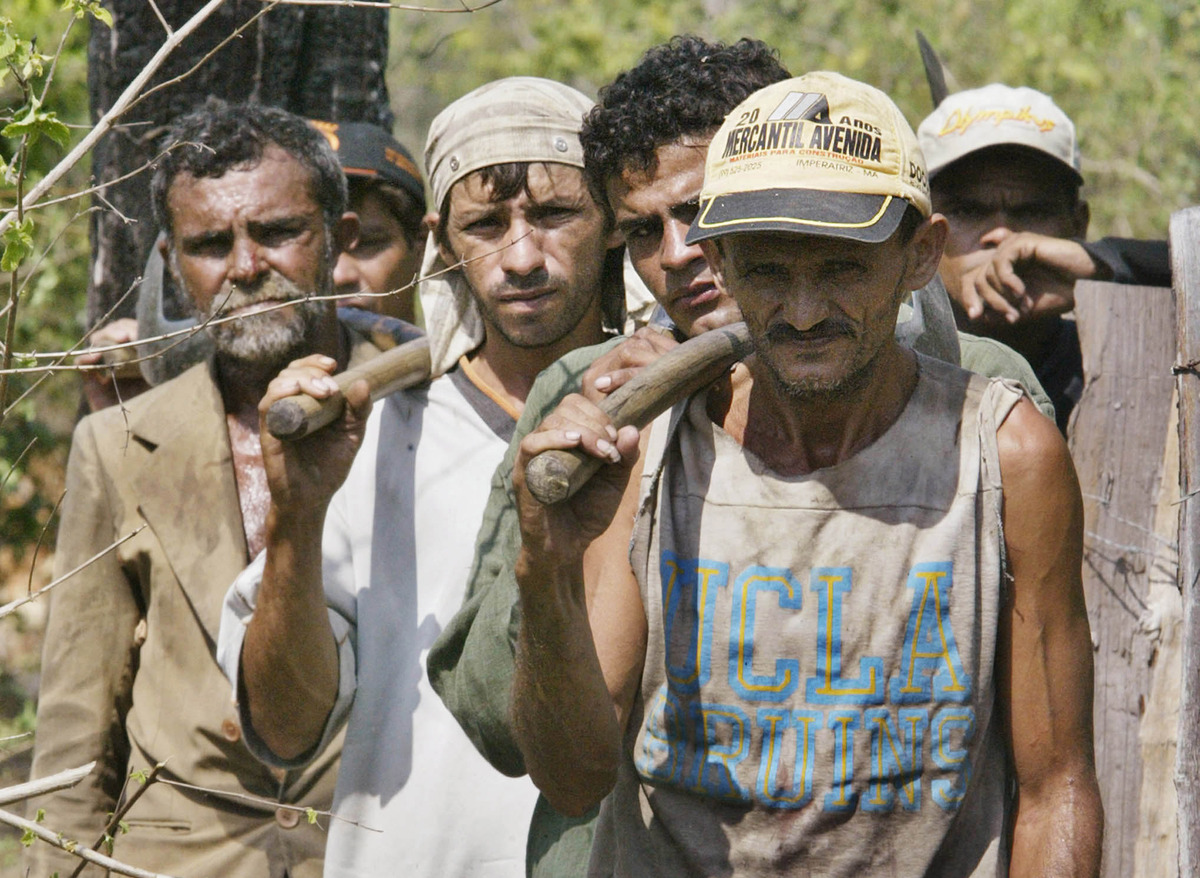 Brazilian slave laborers stop their work to listen to a Labor Ministry inspector explain their legal rights, on the Bom Jesus farm in the Amazon basin in 2003.

I bought Francisco Lima his first taste of freedom in decades.

It was 2004, and Brazil was starting to confront one of its most distressing problems: slavery. I was in northern Pará state, in the Amazon, observing a special police unit that raided slaveholding farms and firms and liberated workers like the 74-year-old Lima.

We found Lima in a squalid, dirt-floor shack with bees buzzing over his pot of days-old rice and beans. The cops brought him to a nearby town, and a colleague and I invited him to lunch. Lima seemed lost in the diner and said he'd have whatever we were having. When his cheeseburger arrived, he furrowed his brow and asked, "Como a gente come isto?"

That's when I realized just how long Lima had been a slave — almost a quarter century by his recollection. Since well before cheeseburgers had made their way onto menus in the Amazon.

People are coming out of slavery, but it's a revolving door. As one person comes out, because the slaveholder is not really punished, a new person goes in.

Ten years later, is Brazil — a new economic powerhouse that considers itself on the brink of development — doing enough to make sure powerless lives like Lima's are no longer being stolen?

As slavery-busting teams like the one I accompanied demonstrate, the South American giant has in many ways become a model for addressing a tragedy that still plagues the entire world. In the past 20 years, almost 50,000 enslaved Brazilian workers have been freed from some 2,000 work sites, from cattle ranches to charcoal plants for pig iron production. Since 2004, a national lista suja, or "dirty list," has fingered some 300 guilty companies, making it hard for them to get financing.

"We are ahead on this," says Leonardo Sakamoto, president of Reporter Brasil, a Sao Paulo-based anti-slavery group. "I believe that Brazil has a model, and [it's] considered by the International Labour Organization as an example [of] the fight against slavery."

But activists like Sakamato also recognize that the fight is seriously undermined by Brazil's deep-seated impunity. Slaveholders can pay hefty fines and civil damages, but criminal convictions and jail time are rare. 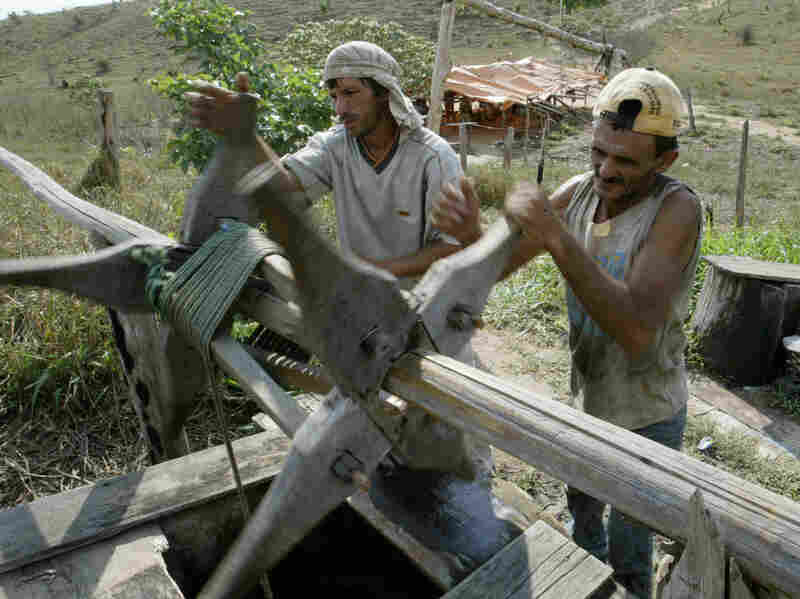 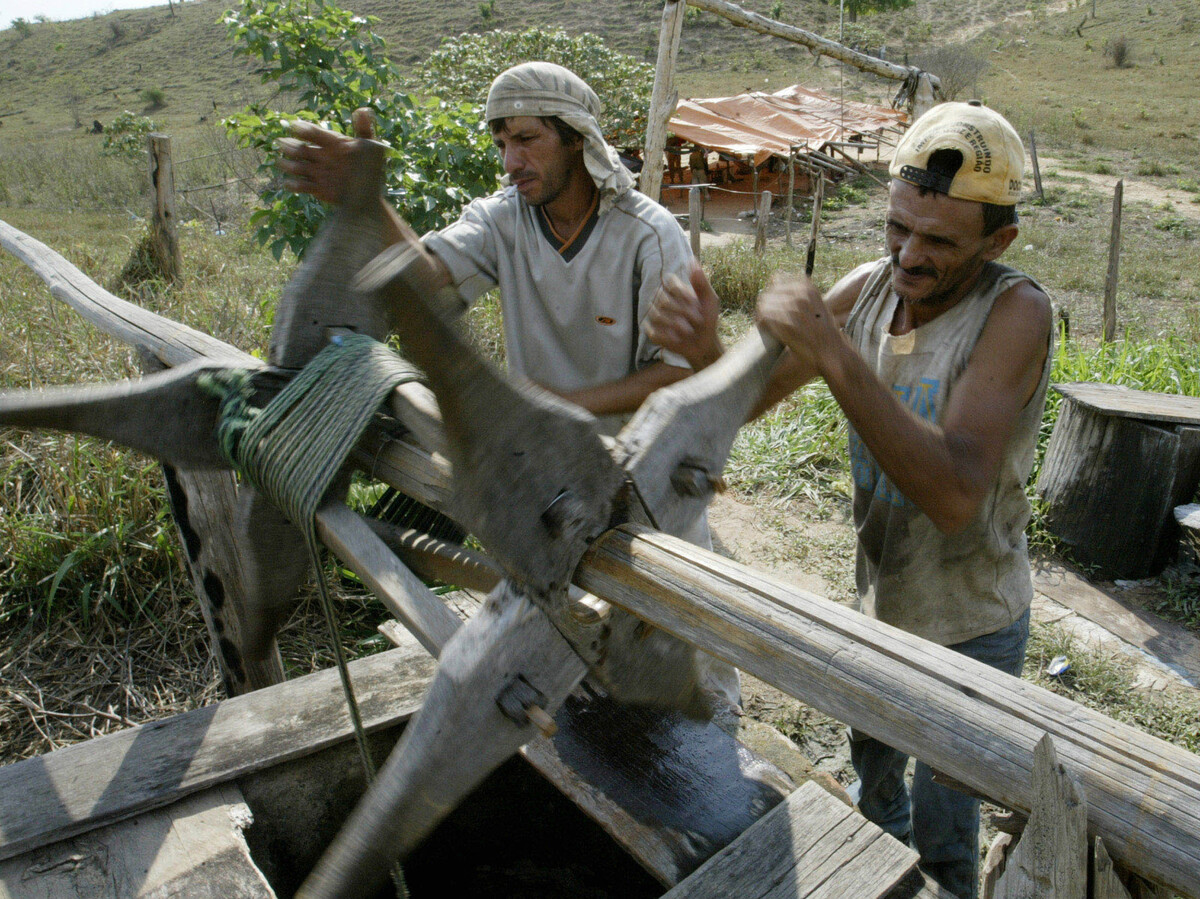 Brazilian slave laborers Valdeci Alves Ciqueira de Oliveira and Francisco Sagivana Soares de Lima draw water from a well on an Amazon basin farm where they had been illegally exploited for six months in 2003.

As a result, says Karen Stauss, programs director for Free the Slaves in Washington, D.C, an estimated 200,000 people are still trapped in slavery in Brazil.

"People are coming out of slavery, but it's a revolving door," Stauss says, "As one person comes out, because the slaveholder is not really punished, a new person goes in."

That could change this year. Brazil is moving closer to final passage of a constitutional amendment that would hit slaveholders where it hurts them most: confiscation of their property — all of it.

Yet that measure, which has been debated for more than a decade now, keeps getting held up. To understand why, it helps first to appreciate why Brazil has the Western Hemisphere's worst slavery situation in the first place.

Brazil was the hemisphere's last country to abolish slavery, in 1888. Afterward, social and economic inequality remained so severe that slavery itself continued to be acceptable, albeit in more deceptive forms.

The most common is debt bondage.

Brazil's urban middle class has grown significantly this century, but rural poverty is still harsh, and laborers are often lured far from home by promises of good jobs. Once many arrive, however, they're shackled by bogus but insurmountable debts for travel, food, clothes and tools. Hence those workers never get paid — and too often, like Lima, they never escape.

'We Are Not Valued': Brazil's Domestic Workers Seek Rights

Sakamoto recalls the first time he came upon indentured farm hands in Pará.

"We found 52 workers in very, very bad conditions," says Sakamoto, "living in [the] jungle, in barracks, people that [were left] to die with disease, hunting to eat, drinking terrible water."

In response to such scenes, groups like Reporter Brasil, as well as the Roman Catholic Church's Pastoral Land Commission, have persuaded Brazil's government and private sectors to sign on to instruments like the Slave Eradication Pact. That association now includes companies that represent 30 percent of Brazil's $2.3 trillion GDP.

Those firms have not only renounced slavery; they've pledged not to do business with anyone else who practices it. That in turn has persuaded foreign businesses that operate in or buy from Brazil, like U.S. automakers, to follow suit.

India, China Top List Of Nations With Most Slaves

"That ability to reach into the supply chain is unique in Brazil," says Stauss. "The Brazilian government in collaboration with civil society is definitely a model element."

Still, the element that's missing is real deterrence — especially the constitutional amendment, which Brazil's ultrapowerful farming and ranching lobby keeps finding ways to block. Until it's unchained, Brazil may be a model — but only half a model.

Tim Padgett is WLRN's Americas editor. You can read more of his coverage here.