Accessibility links
Germany's New Defense Minister: More Peacekeeping Missions Welcome : Parallels Ursula von der Leyen is the first woman to hold the job. She has no military experience and is best known for social policies such as expanded parental leave. But she has already said that Germany should play a more active role in foreign missions, and that could involve sending troops into conflict zones. 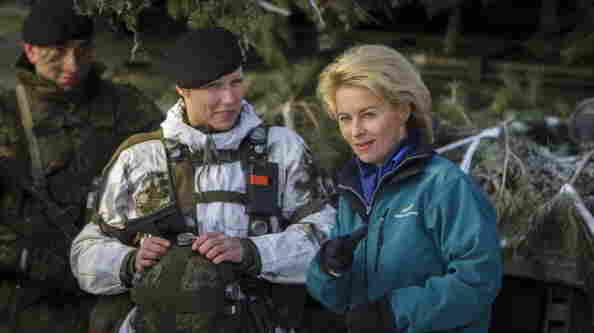 Germany's new defense minister, Ursula von der Leyen, right, chats with German soldiers who have served in Afghanistan, at a training center in Letzlingen on Jan. 28. Von der Leyen has said she would like to see German forces participate more with other European troops in foreign peacekeeping missions. Thomas Trutschel/Photothek via Getty Images hide caption 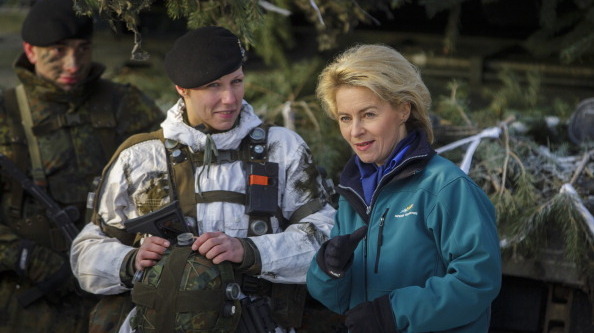 Germany's new defense minister, Ursula von der Leyen, right, chats with German soldiers who have served in Afghanistan, at a training center in Letzlingen on Jan. 28. Von der Leyen has said she would like to see German forces participate more with other European troops in foreign peacekeeping missions.

Many Germans were surprised in December when Ursula von der Leyen was named the country's first female defense minister.

Some people questioned whether a medical doctor with seven children, who championed Germany's generous parental leave policy, was the right choice to shepherd the country's military through the challenges of being a newly minted volunteer force.

Others wondered whether a woman with no military experience could even do the job. The public TV network ARD posted a controversial, photo-shopped image of von der Leyen in a skimpy, Lara Croft-style outfit wielding a gun in each hand.

But von der Leyen — a veteran politician from Lower Saxony who held two previous cabinet posts — has made a career of exceeding everyone's expectations. She quickly shifted the debate in Germany from her qualifications to her plans for the military, including sending more German troops into conflict zones.

Germany's allies – including the United States — have for years demanded the European country take on more responsibility when it comes to ensuring global security. Von der Leyen's predecessors agreed, but were never able to deliver because other German officials refused. The resistance stems from the staunch pacifism that is pervasive in German society since World War II.

"I think she is a person who has the necessary skills to be successful in any political job because she is smart, she is emphatic, she is very disciplined and she knows the rules of the game," says Elisabeth Niejahr, a correspondent for Die Zeit newspaper who has covered the minister for more than a decade.

'Jihad Tourism': From Germany To The Syrian Battlefield

Von der Leyen recently told Der Spiegel magazine that Germany needs to take on more foreign missions because "due to globalization, distant conflicts are now much closer to Europe."

She suggested in the interview that she and others in German government were wrong to abstain from the U.N. Security Council's vote to intervene in Libya in 2011.

"I saw the aggravation it triggered among our allies, I have learned from the Euro crisis that it is important to discuss things to the end...to find a compromise that all can support," she said.

In the article, Von der Leyen added: "Europe must speak with a single voice in the future when it comes to security policy, but that only works if responsibilities and risks are fairly divided among the partner countries."

But sending more German troops into war zones will take more than a change of German public will, says Tobias Wachner, a 37-year-old retired German captain who served four tours in Afghanistan.

"Only a few soldiers are going to missions so they are very stressed," he explained, adding. "They face problems like PTSD and so on. So having the military people available" to deploy is paramount.

A Time Of Change

The German military is undergoing structural and funding reforms that have hampered recruitment and sent morale in the 185,000-member-force to its lowest level in 25 years, according to a recent report to parliament from the body's commissioner for the German armed forces.

A separate study by the Bundeswehr Center for Military History and Social Sciences found that more than half of 18,500 German women in uniform report being sexually harassed.

Von der Leyen's plan to reverse such trends is to turn the military into one of the most desirable employers in Germany. She plans to do that by creating a family-friendly workplace for troops, including more part-time opportunities and day-care and making sure those in uniform and their dependents have all the support they need.

"Soldiers are happy, because in the last four years all they've heard about are cutting costs and structural reforms," he said. "The individual was left dangling in the background. Now people are front and center and it's a great strategy, because the best equipment won't matter if there are no soldiers to use it."