Accessibility links
For Descendants Of Brazil's Slaves, A Quest For Land : Parallels Brazil was the last country in the Americas to outlaw slavery. Descendants of runaway slaves are fighting for land rights. They were granted the rights in 1988, but few have actually gotten ownership. 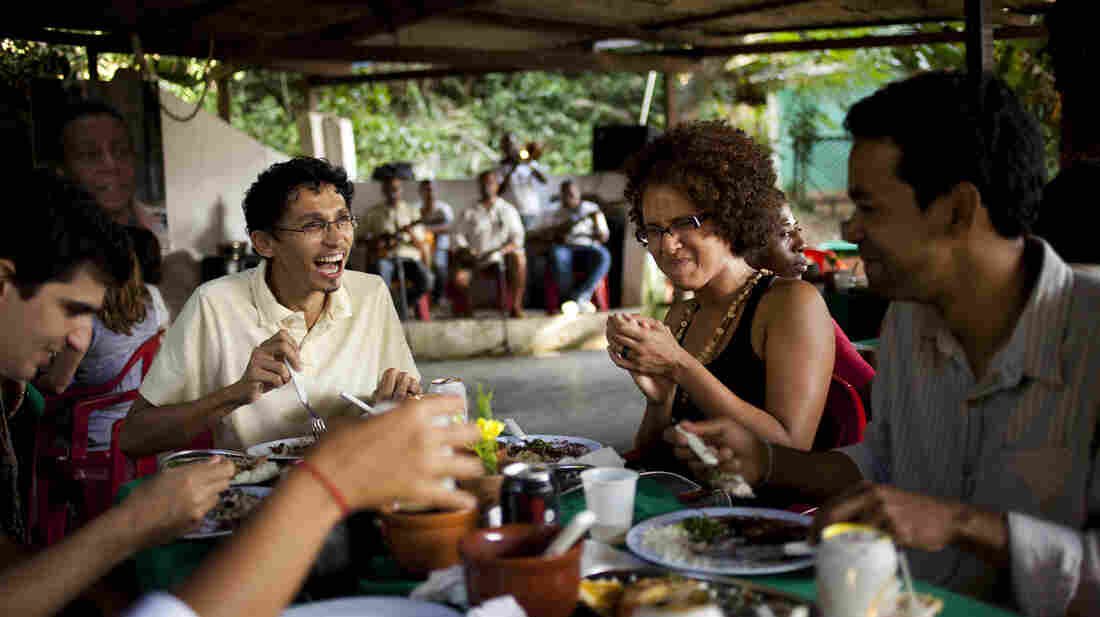 Residents enjoy a meal at the Quilombo Sacopa in Rio de Janeiro in 2012. Brazil has some 3,000 quilombo communities, which were formed by runaway slaves, dating to the 19th century. Residents have been promised ownership of their land but say the legal process has moved slowly. Victor R. Caivano/AP hide caption 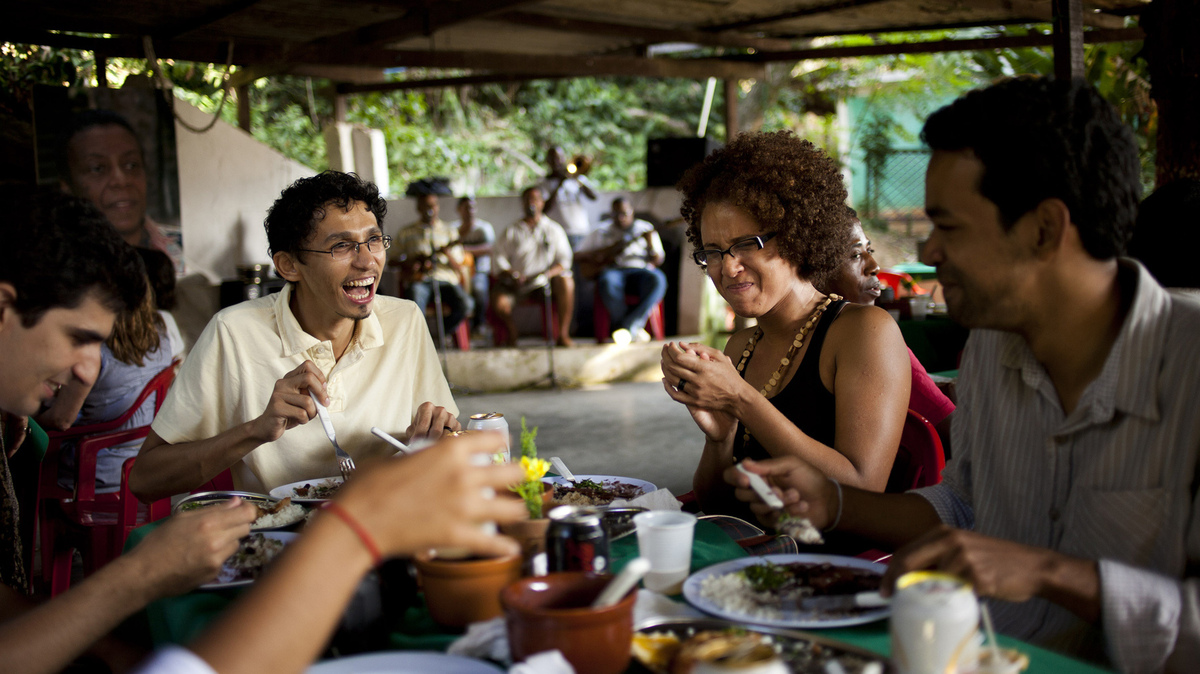 Residents enjoy a meal at the Quilombo Sacopa in Rio de Janeiro in 2012. Brazil has some 3,000 quilombo communities, which were formed by runaway slaves, dating to the 19th century. Residents have been promised ownership of their land but say the legal process has moved slowly.

Brazil was the last country in the Americas to outlaw slavery, and it imported more slaves than any other country in the region. Some 4 million Africans were enslaved in Brazil.

Some ran away from the brutal treatment, forming hidden communities all over the country known as quilombos. Their descendants — called the quilombolas — were granted land rights in 1988. That was exactly a century after slavery was outlawed. But to this day, very few have actually gotten legal ownership of the land where their families have lived for generations.

One such community is in the heart of the Mata Atlantica, a tropical coastal forest, in between Sao Paulo and Rio de Janeiro. The very remoteness of this community tells you a lot about the origins of the quilombos themselves.

Laura de Jesus Braga is a 57-year-old leader of the community here. She explains that land rights are so important to the quilombo communities because of what their ancestors suffered.

"I think that if we recover the land, the culture, everything they liked to do, that's the way to show them — wherever they are — that we are fine," she says in Portuguese. "They had nothing, but we are fine."

We drive on a bumpy pitted road, a lush forest canopy arching overhead until we come to a clearing by a wide shallow river. A large wooden water wheel — partially reconstructed after the original was stolen in the 1980s — is what remains of a slave coffee and sugar plantation.

Jose Viera is in his late 70s. He sits next to the water wheel every day and talks to the tourists who occasionally stop by to take a dip in the river. His daughter sells snacks and drinks. In the oral tradition of the Afro-Brazilian, he tells me the story of his community.

"In fact it is like this," he says in Portuguese. "When the Portuguese came to Brazil, there were Indians already here. Then they brought people in from Africa to work. They didn't bring them as human beings but work tools. Those were my people. This here was a place for them to work. They were beaten so badly some formed a group and ran away into the forest, the quilombo, their refuge."

Forming Communities, But Without Land Rights

Once the slaves were freed they no longer had to hide, he says, so they grouped together to live off the land — fishing, hunting, whatever they could to survive. They settled, he says, but they did not own the land.

Brazil has some of the most unequal land distribution in the world. Forty percent of Brazil's rural area is owned by 1.4 percent of landholders.

There are some 3,000 communities that recognize themselves as quilombo, but only a few hundred have actual titles to the places they inhabit despite the constitution's granting them land rights.

Rosana Schwartz, a historian and sociologist at Mackenzie University in San Paulo, specializes in the quilombo. She says they have created communities where they pass on their traditional oral culture, their African ancestry. She says they reframe their own culture — and this is very important to Brazil, she says. It's why the country is so culturally rich and varied today.

"Because they were initially hidden communities the areas they settled in were remote and they were taken over by the state eventually — parks, beaches, areas that the cities appropriated when they were expanding," Schwartz says in Portuguese.

Getting Kicked Off The Land

And that's exactly what happened at Fazenda Picinguaba. The quilombo communities here now lie smack in the middle of a national park.

Jesus Braga says when the park was created in the late 1970s, dozens of families lived here, but they were all kicked off the land. Her house was even demolished.

"They said the land now was state owned. It was theirs and we couldn't stay here anymore. I was five months pregnant and had five small children," she says. "They put me onto the street. We lost our culture; the youth went away; the families went away because they couldn't plant, fish or build. So, everything was taken from us. But some people resisted, like me. I stood and resisted because I knew my rights. I knew I had an origin, an identity, so I stood. I didn't go away."

Despite repeated attempts, the park authorities refused to speak to NPR about the situation of the quilombos here, citing ongoing legal issues. 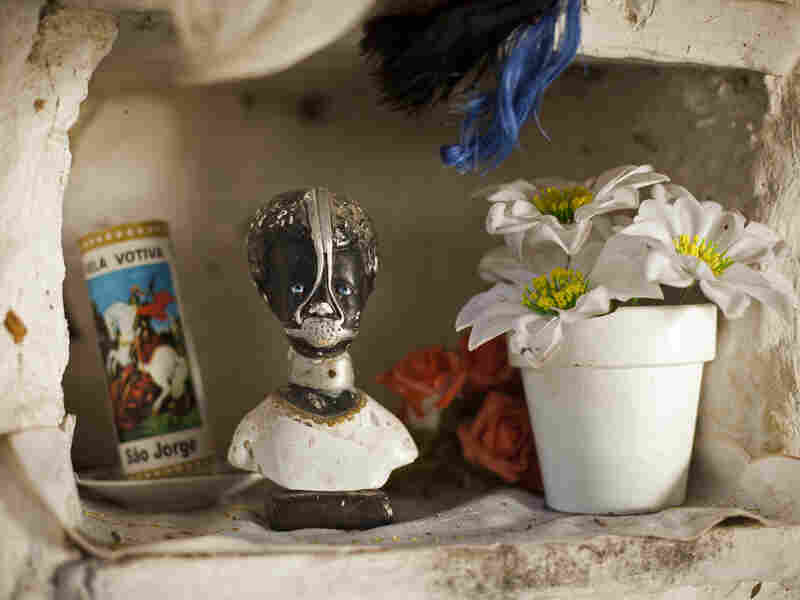 Slave Anastacia, a figure venerated by many as a saint in Brazil, decorates a public space in the Quilombo Sacopa in Rio de Janeiro. Victor R. Caivano/AP hide caption 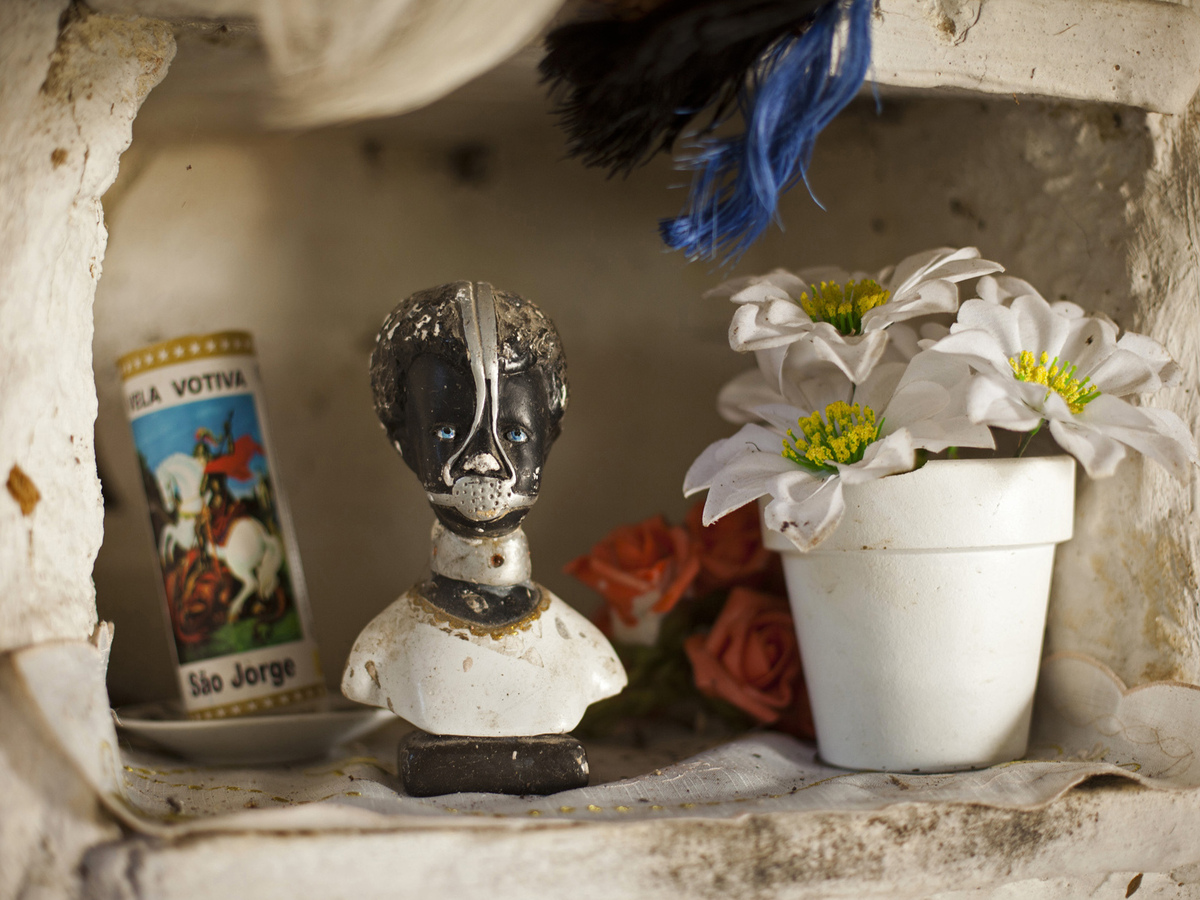 Slave Anastacia, a figure venerated by many as a saint in Brazil, decorates a public space in the Quilombo Sacopa in Rio de Janeiro.

The quilombolas who live here got electricity only in 2010. Before that, the state refused to allow them any connection to services, saying it was a national park.

Jesus Braga says after an agreement, the park has now allowed them to make money by working at the park's snack shack and collecting money from tourists at the parking lot. She was also allowed to rebuild her home right near the beach. A few other families have moved back into the area.

But when she dies, she won't be able to pass on the house she built with her own money to her children because she is still technically considered a squatter. She says she wants her community to have its claim to this land legally acknowledged.

"When they made the park, they saw the wonderful Mata Atlantica forest. It is really beautiful — a clean beach — but it was preserved by those who have lived here," Braga says. "I like it here and it strengthens me to fight, to win, to conquer."

A previous Web version of this story incorrectly stated that the United States imported more slaves than Brazil. Brazil imported many more slaves, according to historians.