Accessibility links
Olympics Set To Transform Rio — But For Better Or Worse? : Parallels Rio de Janeiro is racing to ready itself for the 2016 Summer Olympics. But it's facing difficulties: ballooning budgets, pollution, questions about the development plans and rising crime. Some wonder whether ordinary Brazilians will benefit. 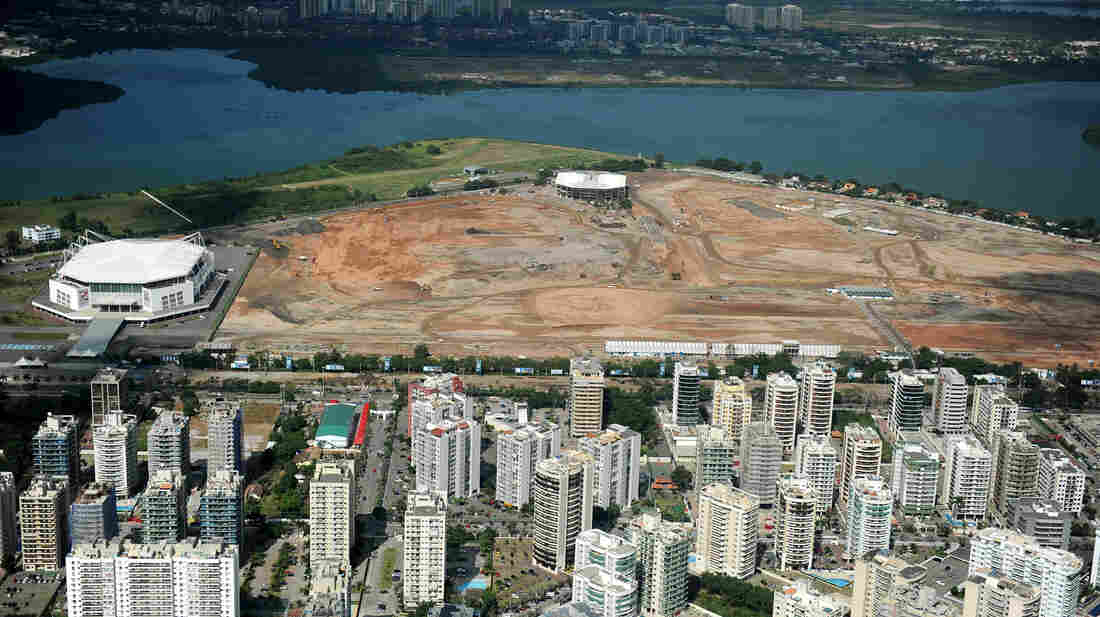 An aerial photo taken on May 10, 2013, shows the site of the future Olympic Park being constructed for the 2016 Summer Games to be held in Rio de Janeiro, Brazil. Vandelerei Almeida/AFP/Getty Images hide caption 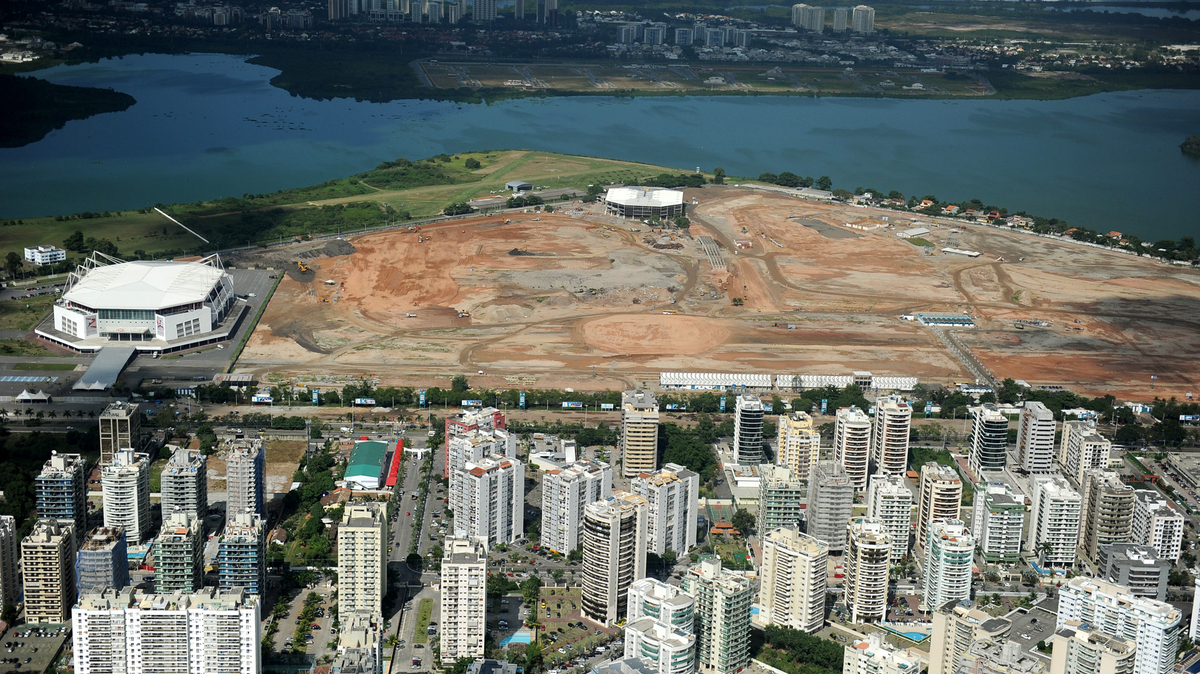 An aerial photo taken on May 10, 2013, shows the site of the future Olympic Park being constructed for the 2016 Summer Games to be held in Rio de Janeiro, Brazil.

Rio de Janeiro is set to host the 2016 Summer Olympic Games and there are two starkly different visions of what that will mean for the "marvelous city," as it is known.

"I would love to be born in Rio in 2020. The babies that are born here in 2020 will be born in a marvelous city ... because of the games," says Leonardo Gryner, the chief operating officer of Rio's Olympic Organizing Committee.

It's probably the largest privatization scheme in the Americas right now.

He says the sports arenas are the easy part. The plan, he says, is to totally transform Rio — better transportation, new museums, new housings — billions of dollars in development coming to this city by the sea.

"We are extending the subway system, we are introducing new transportation in the city, we are renovating the port, we are accelerating the cleaning of the bay, the lagoon," Gryner says.

In a city where 40 percent of the population live in favelas, or shantytowns, that all sounds like a good thing.

But not everyone thinks so.

One of the areas undergoing massive transformation is the historic port.

"It's probably the largest privatization scheme in the Americas right now," says Christopher Gaffney, a professor teaching architecture and cities at Rio's Federal Fluminese University. Gaffney has studied the impact of mega-events worldwide, and in particular, what's happening in Rio right now.

The Museum of Tomorrow, Rio's new modern art museum, and high-end apartments are going up as old highways in the area are coming down. All of this is happening among some of Rio's oldest buildings; the São Bento Monastery, with its elaborate stone 17th century architecture, is in the middle of all this construction. 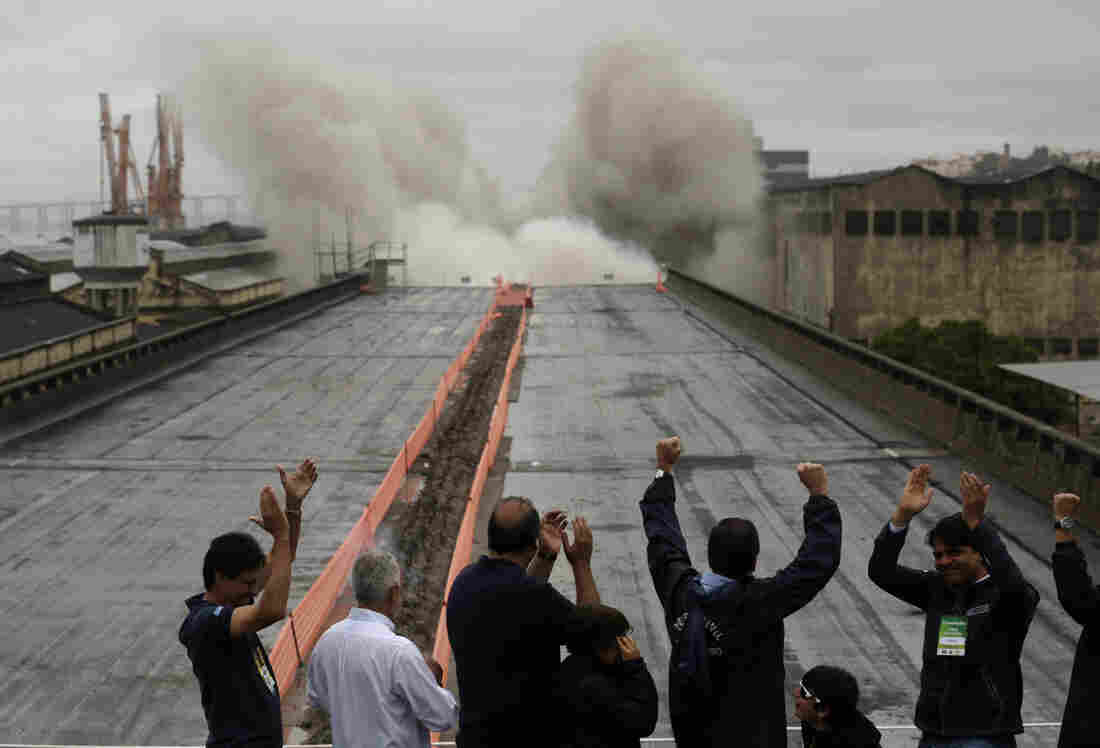 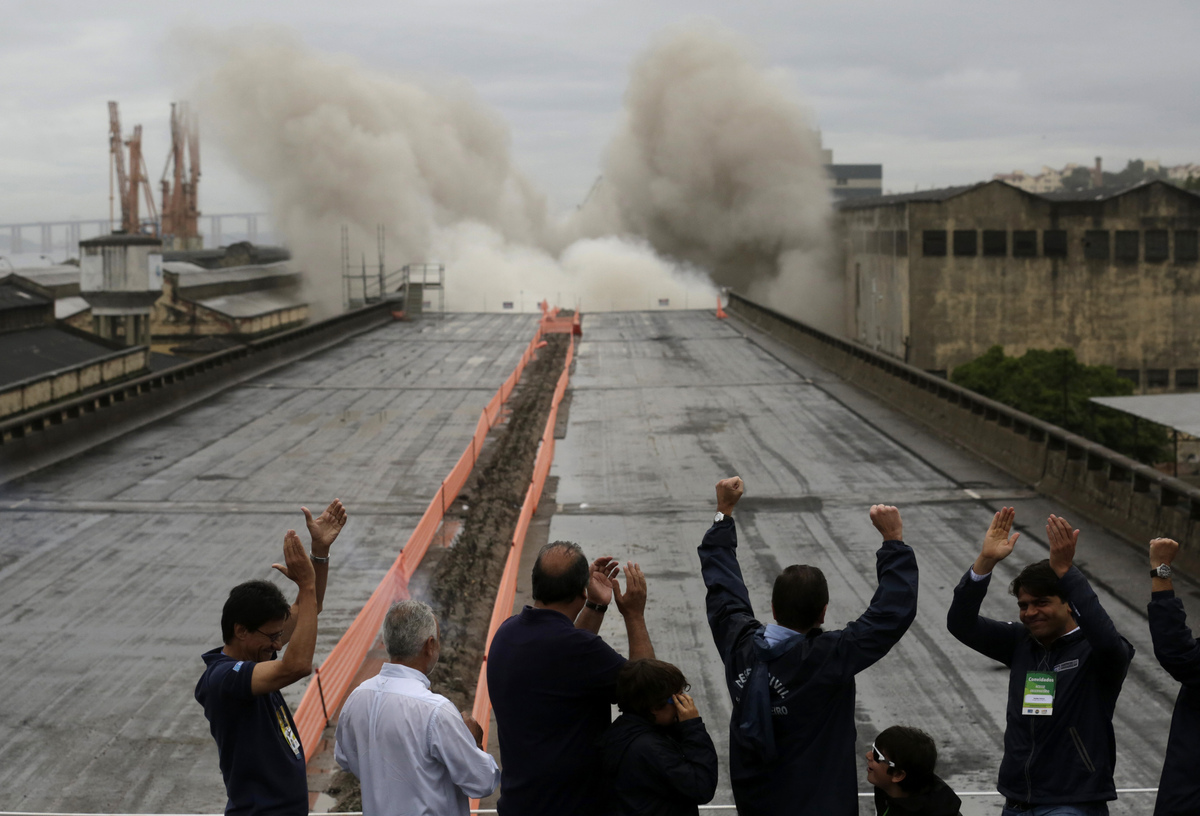 Local authorities celebrate a demolition explosion that's part of Rio's Porto Maravilha urbanization project, in Rio de Janeiro, on Nov. 24, 2013. The state- and federal-supported project is part of the city's redevelopment ahead of the 2016 Summer Olympic Games.

Gaffney says the whole concept of what's happening across the city is wrong and the port is the perfect example.

"Instead of creating a space of conviviality, a space of shared culture, of community, of conversation, you are going to have this very isolated element where after 5 o'clock in the afternoon, it's going to be dead. You are creating banks, parking lots, Trump towers," Gaffney said. "It's been rezoned for 50-story buildings."

Because private money is financing much of this development, it's putting public spaces into private hands, to the detriment of the city's poorer denizens, he said.

The point of the port project, Gaffney said, is to attract high-income residents. For instance, the city is building a light rail system for just this area. But he said there will be no material improvements to the dire transport in many of the peripheral neighborhoods where most of Rio's workers live.

"So sure, being born in Rio in 2020 is going to be great for those who can afford it," Gaffney says. "Unfortunately, Rio has lost the opportunity to transform itself into a more just, a more livable city, and now it's simply becoming a playground for the global rich."

Those aren't the only criticisms — the problems with the upcoming World Cup in Brazil this summer have cast a long shadow.

Rio hosted the 2007 Pan American Games, an event that came in way over budget and left little lasting legacy. Rio's Olympic Committee is vowing that won't happen. For example, the Olympic handball arena will be a modular structure that will eventually be carted off to be turned into four schools around the city.

Rio's organizing committee says everything is going to plan. The venues in the Olympic park are being built at a furious pace to stay on schedule. The venues rise from a vast former racetrack in the area of Barra de Tijuca in Rio, the city's far west.

But while the building seems to be proceeding, the bill is growing. A partial budget unveiled earlier this month saw costs ballooning some 25 percent. Organizers say that's due to inflation, growing labor costs and increases in the cost of the technology needed.

The final cost of the vast infrastructure and security projects set to accompany the big event — which will be financed by the government — hasn't been disclosed yet.

Anger over public spending for the World Cup was a catalyst for protests that swept across Brazil last summer. People are concerned not only about the money but whether in the end what was promised will be delivered.

On a recent Saturday morning, a group gathered on Ipanema beach to protest the high level of water pollution in Rio's oceans and lakes, where many of the Olympic rowing and sailing events will take place. 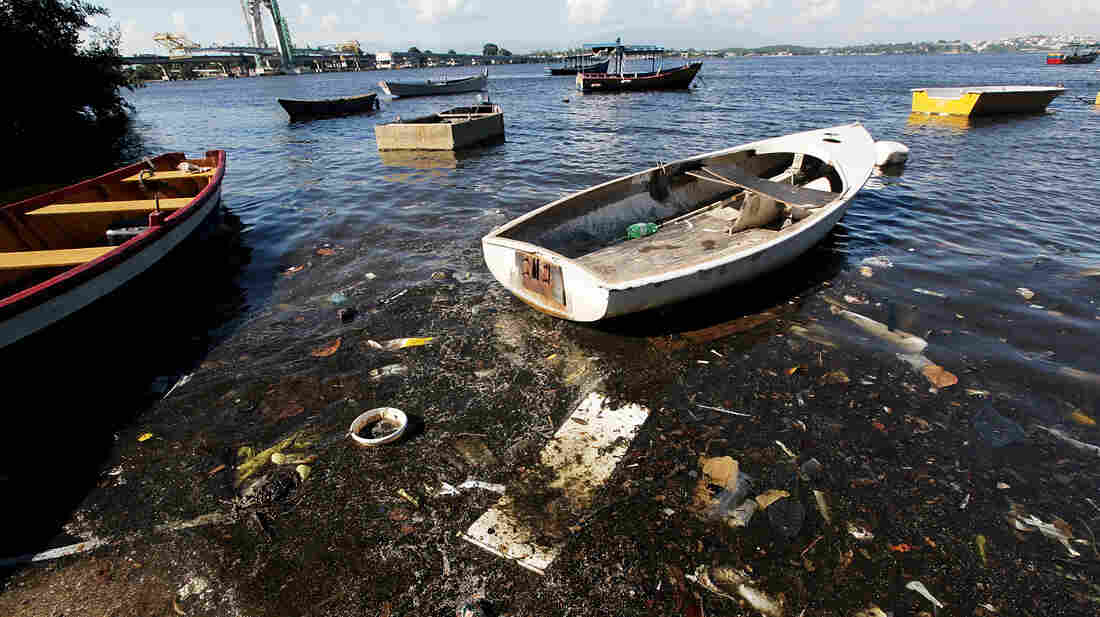 Boats float along the shoreline of the polluted waters of Guanabara Bay on Jan. 21 in Rio. The bay will be the site of sailing events during the Olympics. Local residents recently protested the high level of pollution. Mario Tama/Getty Images hide caption

Protester Fernando Leonards said he recently visited the future site of rowing events and saw unbelievable amounts of garbage. He said the Olympians aren't going to like what they see when they arrive.

"They are at risk of diseases, and I think that the government should be making this clear to everyone that's involved, and I don't think the government is doing this," he said.

A large-scale cleanup was promised for Guanabara Bay, the body of water that surrounds Rio. Giant so-called eco boats have been sent out, but protesters say it's a cosmetic solution: Only 30 percent of Rio's sewage is treated and still flows unimpeded into the area.

Rio is also facing a spike in crime despite the city's well-funded and well-publicized pacification program, a community policing initiative in Rio's favelas.

Leonardo Gryner, the chief operating officer of Rio's Olympic Organizing Committee acknowledges there are many moving parts in what the city is doing in advance of the games.

Still, many Brazilians wonder if the billions being spent will really pay off.