Accessibility links
As Brazil Gears Up For Olympics, Some Poor Families Get Moved Out : Parallels An estimated 3,000 families have been evicted to make way for building projects related to the 2016 Summer Games. The families and Olympic organizers don't always agree on whether it's an upgrade. 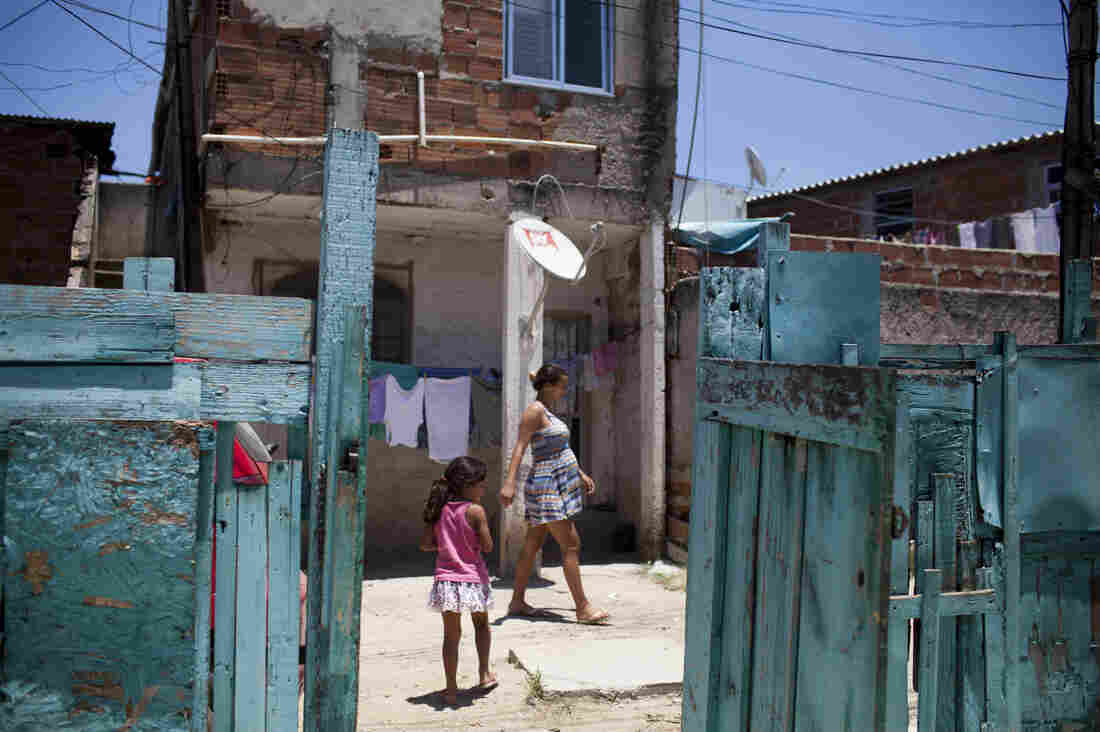 Maria Victoria Agostinho, 5, walks outside her home in the Vila Autodromo area of Rio. Her family is slated for eviction, along with others in the area, to make way for building projects related to the 2016 Summer Olympics. Lianne Milton for NPR hide caption 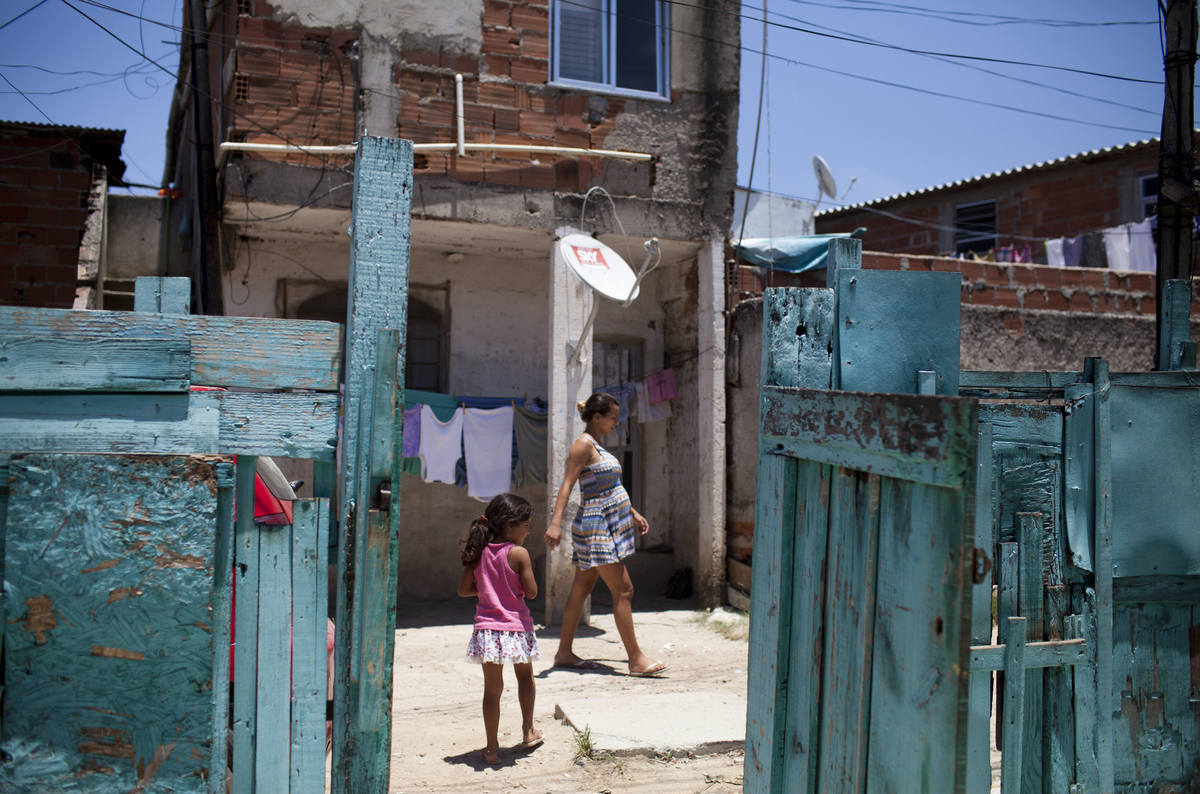 Maria Victoria Agostinho, 5, walks outside her home in the Vila Autodromo area of Rio. Her family is slated for eviction, along with others in the area, to make way for building projects related to the 2016 Summer Olympics.

Jeane Tomas scraped all her money together to build a house where she could raise her son. She'd been renting in the favela, or shanty town, of Vila Harmonia and wanted to put down roots in the community where she lived when her child was born.

The house went up — only to quickly come down.

"There is this frustration to have worked so hard, dreamed so much to leave everything behind," she said.

Now that the Winter Olympics in Sochi are over attention will be turning to Brazil, the host of the 2016 Summer Olympics.

Rio de Janeiro is undergoing a massive transformation in advance of the games
and that has brought with it a number of criticisms. Chief among them are the forcible evictions that are taking place across the city.

Tomas was among those who were moved.

It was near her work, near doctors, and other key amenities, she said. About three years ago, she was told she would have to leave to make way for a new road that was being built as part of an infrastructure upgrade.

"And I would ask them, where to? They were asking us to sign papers without knowing where we were going," she said. "Then they showed us this place and, to be honest, we really didn't have a choice."

With the money she received in compensation, she said she couldn't afford anywhere else.

According to human rights groups, some 3,000 families have already been evicted from their homes in Rio alone. As many as 200,000 people across the country are at risk of the same, according to the Popular Committees for the World Cup and Olympics.

It's not just the evictions, but also where people are being sent to.

The place where Jeane Tomas now lives is called the OITI complex.

Favelas — for all their poverty — are teeming with life. But the OITI complex feels like it's on life support. It's a barren, treeless, apartment compound in a Rio suburb called Campo Grande, miles away from where Tomas lived in Barra de Tijuca.

"Our lives were built around were we lived. The transport is awful here. They talk about this special bus line they built for us out here but it's not the miracle they say it is. Its chaos," she said. "There are days when the air-conditioning works, others when it doesn't. We wait for hours to get out of here."

The housing is new though and the people live there at a relatively low cost. They pay a small condo fee and utilities.

Still, they don't own these homes and they can't rent them to others.

Jeane Tomas complains there are no schools nearby. She still hasn't been able to enroll her child in daycare. There are no jobs close either. She says her husband lost his job because suddenly he was so far away from it.

Tomas works as a maid and she said she suspects the reason so many people are being moved is because its the Rio elites making the decisions.

Government officials deny those allegations. They say those who have been moved now live in government housing that is far superior to where they lived before. 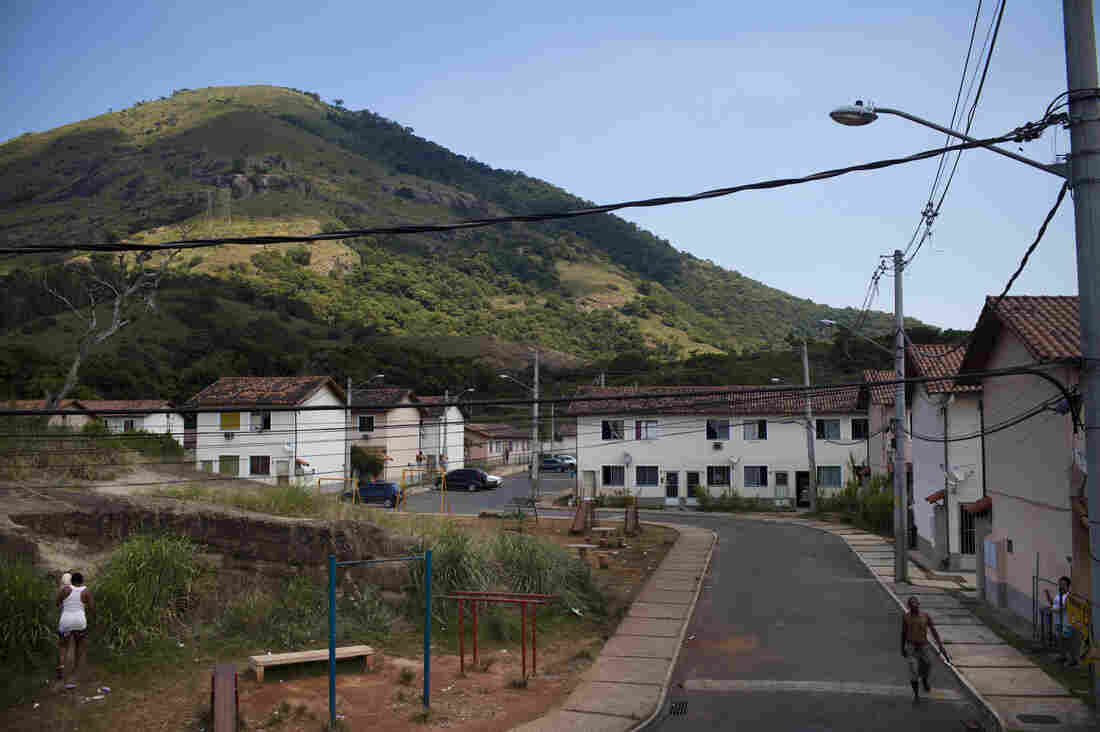 The Terni apartment complex in Rio de Janeiro's far west zone of Campo Grande. Many residents were relocated to this area because their old neighborhoods were knocked down to make way for building projects related to the Olympics. Lianne Milton for NPR hide caption 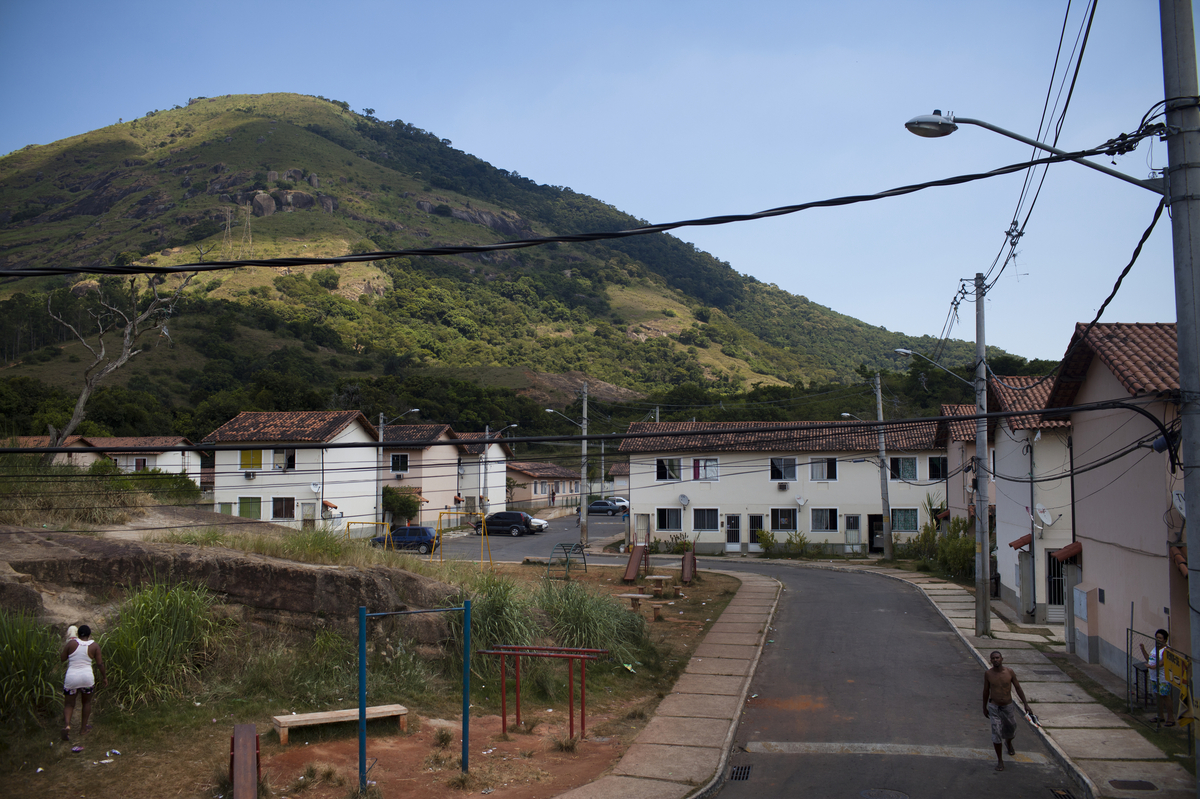 The Terni apartment complex in Rio de Janeiro's far west zone of Campo Grande. Many residents were relocated to this area because their old neighborhoods were knocked down to make way for building projects related to the Olympics.

Leonardo Gryner, the chief operating officer of Rio's Olympic Organizing Committee, said a few families have been moved to improve the life of many people. The roads and bus lines that have been put in place will allow people to travel more freely, he said.

However, activists and academics allege the forcible evictions have more to do with real estate than real help to the poor.

Rio's Olympic Park is being built in Barra de Tijuca, where Jeane Tomas once lived.

It used to be a poor area. But with the influx of development and roads for the Olympics, luxury apartment complexes are springing up along with Miami-style malls. Land is becoming extremely valuable. For example, the athletes housing during the games is going to be turned into high-end apartment buildings once the games are over.

Orlando Santos Junior is a professor of urban planning at Rio de Janeiro Federal University who has studied the evictions for years.

Did London Get An Economic Boost From The 2012 Olympics?

Samba School Murder Exposes The Dark Side Of Rio's Carnival

"The other issue is that the people who are moved live on the margins, if they are uprooted from their networks that allow them to survive it actually makes them worse off, not better," he said.

He said what is happening is going against the very fabric of what a city should be. In Rio, the changes are creating more homogenous spaces with walls, sometimes real, sometimes invisible, that separate social classes.

Other activists say what are being created are tomorrow's favelas. As the city moves out these people, they are being trapped in places where they cannot thrive.

Back in the government housing complex, Jeane Tomas said she was grateful for a roof over her head but she spoke wistfully of her former home. On her way to work, she passes the place her favela used to be. Now it's an empty field next to a new gas station.