Accessibility links
Anti-Abortion Push Has Spain Debating Definition Of 'Progress' : Parallels Parliament is likely to approve a near-total ban on abortion, which has been legal in Spain since 1985. Some proponents argue change has come too quickly, breaking down traditional Spanish values. 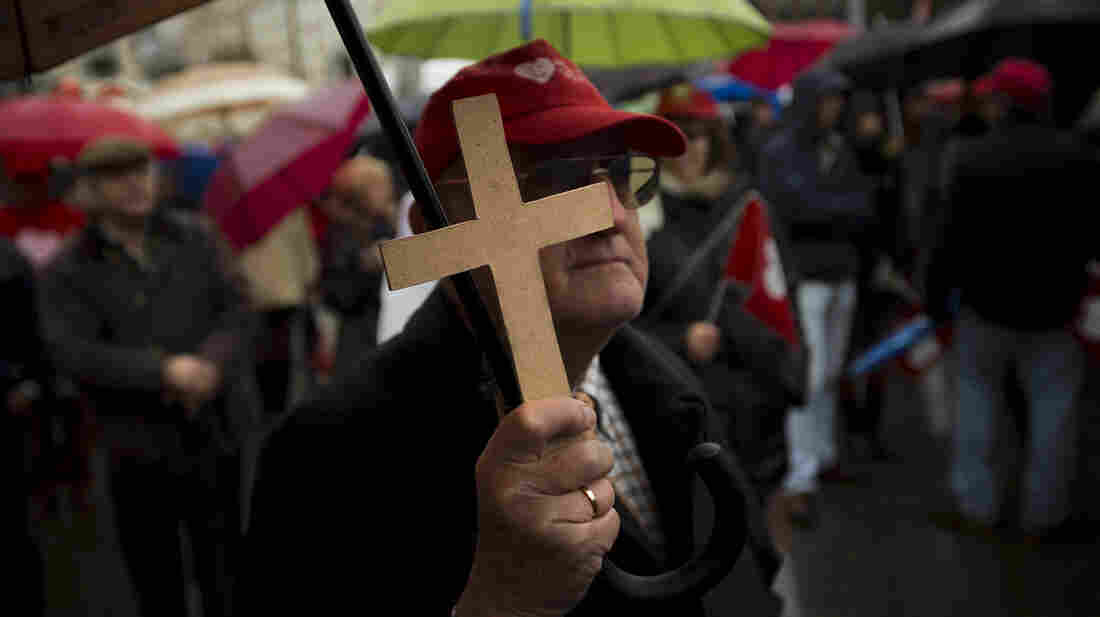 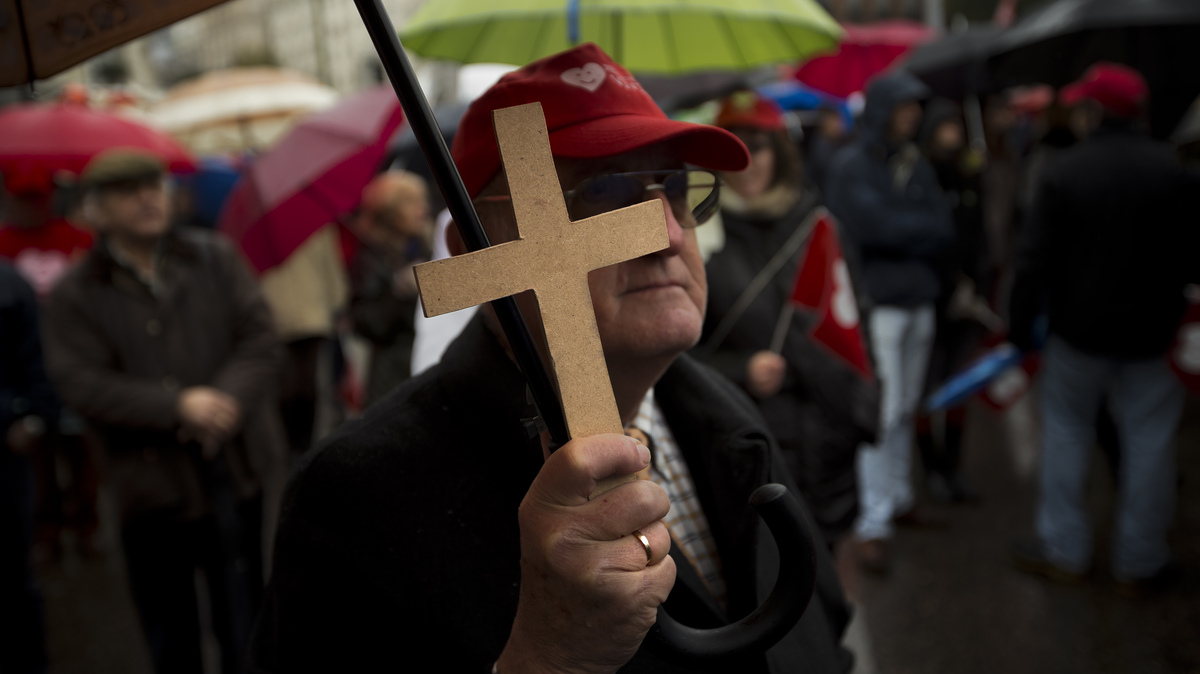 Anti-abortion advocates protest in Madrid on Oct. 17, 2013. Spain's Parliament is expected to approve abortion restrictions in the coming weeks.

Born in a tiny pueblo south of Madrid, Esperanza Puente arrived in the Spanish capital fresh out of high school. It was the late 1980s, and Spain was reveling in newfound freedoms after its military dictator Francisco Franco died and democracy took hold.

"The end of the 1980s was a wild time in Madrid — alcohol, drugs, nightlife, sex without commitment. When I arrived from a small village, I ate it up, like it was the end of the world!" recalls Puente, now 43, smiling. "But I ended up pregnant, and my boyfriend suddenly didn't want anything to do with me."

Puente couldn't bear to tell her conservative Catholic family back in her village that she was pregnant and unmarried. So she sought another option: Spain had just legalized abortion in 1985.

"I had this new option of abortion, which seemed easy and painless. You could get one in 24 hours," Puente says. "I felt like I didn't have any other alternative."

But Puente has come to regret that decision. Some 25 years later, she now volunteers with an anti-abortion group, counseling pregnant women who are in the position she once was, deciding whether to abort or give birth.

She's changed her mind about abortion — and so has Spain's government. Puente's personal journey reflects a larger backlash against a number of changes in Spanish society in recent years.

The Spanish government is on its way to creating one of the toughest abortion laws in Europe — a near-total ban, except in cases of rape or grave risk to the mother's health. Serious birth defects will no longer be grounds for terminating a pregnancy.

In Europe, only the tiny island nation of Malta has a complete ban on abortion. The procedure is legal and widely available across much of the continent — France, Germany, the Netherlands, Portugal, Italy. Even Ireland, with its own deep-rooted Catholic society, amended its laws last year to legalize abortion in limited circumstances, when the mother's life is at risk.

Spain first legalized abortion in 1985, and then widened its availability with another law in 2010. New legislation to override both those laws won government approval in December, and awaits a final vote by Parliament in the coming weeks or months. The conservative Popular Party holds an absolute majority in Parliament, so passage is virtually guaranteed.

Polls show, however, that more than 80 percent of Spaniards want abortion to remain legal and accessible, like in most of Europe.

Thousands of protesters march up and down Madrid's wide avenues every weekend. Many accuse the government of cowing to the Catholic Church.

At one of the more colorful recent protests, a dozen topless women chanted, "Abortion is sacred!" as they rushed toward a Catholic cardinal, pelting him with lace panties. Priests closed in on the cardinal, and elderly churchgoers used their handbags to swat at the topless protesters.

Theatrics aside, many abortion-rights advocates believe the new law will turn the clock back to the 1970s, when Spanish women had to travel abroad to get abortions.

"Many women will be packing their suitcases once again for weekend flights to France and England," says Luis Enrique Sanchez, president of Spain's Planned Parenthood Federation. "This is a situation we cannot endure. It'll do so much damage to the Spanish population." 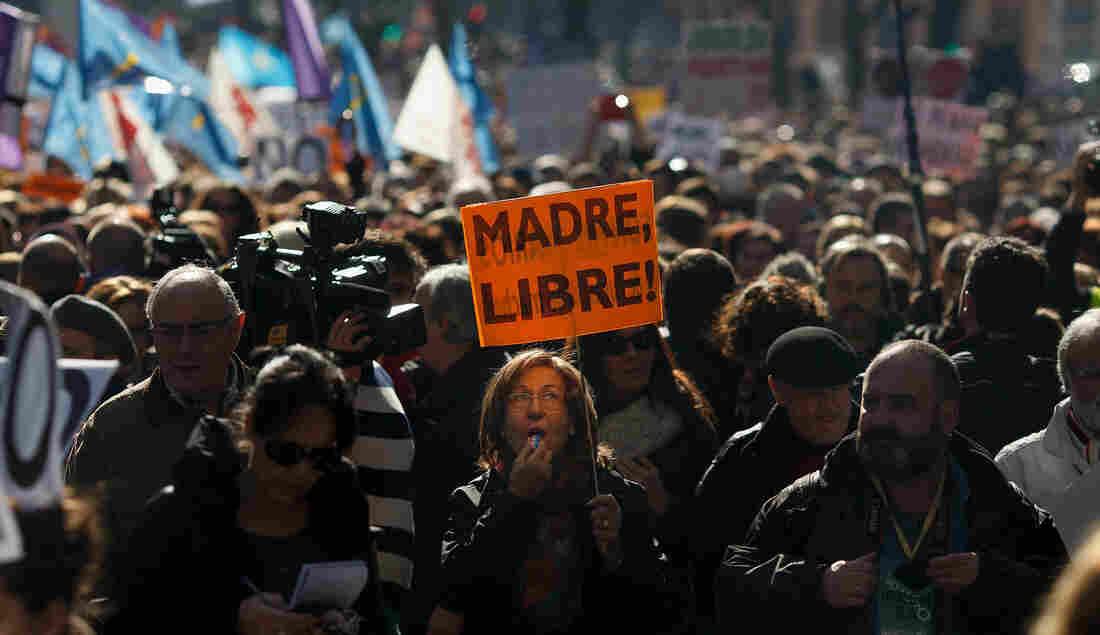 Abortion-rights groups participate in a "Freedom Train" from Gijon, Spain, to Madrid on Feb. 1 to protest the government's plan to restrict access to abortion. Pablo Blazquez Dominguez/Getty Images hide caption

Tightening Spain's abortion rules was one of the Popular Party's campaign promises during the 2011 general elections, which the party won by a wide margin. In recent months, Prime Minister Mariano Rajoy has moved toward the right, trying to keep members of his conservative party from defecting to new far-right political party, Vox, which has been compared to the Tea Party in the U.S.

But on abortion, Spain's conservatives also face another revolt from the center — led by Celia Villalobos, the deputy speaker of Spain's Parliament. She is a conservative, and an abortion-rights advocate. Villalobos has urged fellow conservatives to break with the party leadership and vote their conscience on abortion.

"Sure, there's a far-right wing of the party that's much more conservative, and it's pressuring the leadership," she said in a recent interview. "But what's happened is, we're not in 1985 anymore. We're in 2014, and things have changed."

In the intervening years, most of Europe legalized abortion. In 40 years, Spain has changed from a Catholic dictatorship to one of the first European nations to legalize gay marriage.

For some Spaniards — especially older conservatives, many of whom happen to sit in Parliament — change has come too fast, and it's bewildering, says Fernando Gortazar, with the Family Forum, another anti-abortion group.

"Sometimes when you introduce a big change, and people get these sudden and a bit crazy freedoms of the last years, maybe some of the things that should never change are confused with what is real progress," Gortazar says.

That's the real debate taking place in Spain now: whether the freedoms that came with democracy in the 1980s represent true progress, or a breakdown of traditional Spanish values.

Despite fierce arguments on both sides, Spain's Parliament will almost certainly choose to severely restrict abortion when it comes up for a vote.