Accessibility links
Secretary Of State Kerry Says Ukraine Is Not A 'Cold War Story' : Parallels While Russia carries out military exercises near Ukraine's border and shelters its ousted president, the U.S. is watching closely. But Kerry says Ukraine shouldn't feel pulled between East and West. 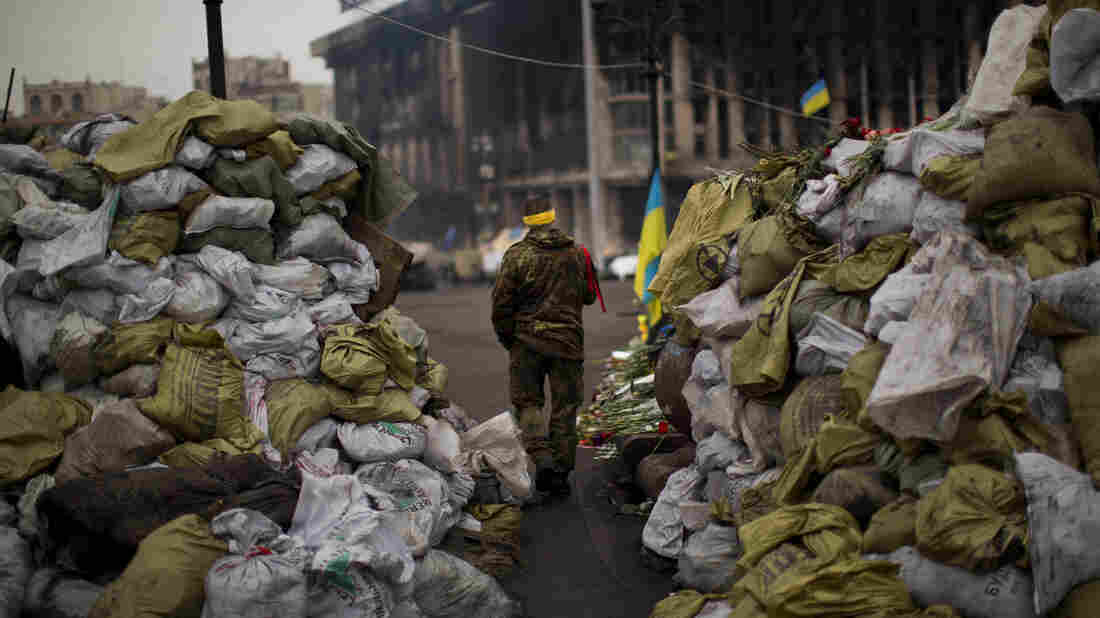 An anti-Yanukovych protester walks past a barricade in Independence Square, the epicenter of the country's current unrest, in Kiev, Ukraine, on Wednesday. Emilio Morenatti/AP hide caption 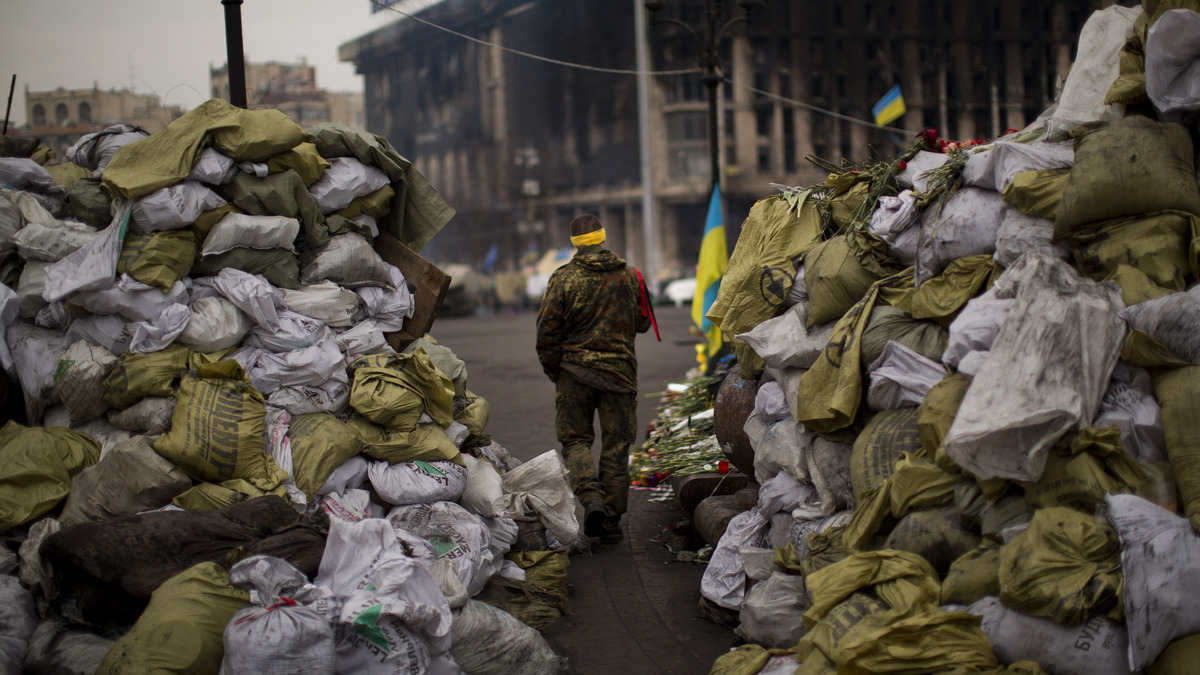 An anti-Yanukovych protester walks past a barricade in Independence Square, the epicenter of the country's current unrest, in Kiev, Ukraine, on Wednesday.

Ukraine's ousted president, Viktor Yanukovych, emerged Friday to give a news conference on Russian soil, not far from the Ukraine border. Russia is not only giving Yanukovych shelter — it's also carrying out military exercises that have raised alarms in Washington.

The U.S. says this shouldn't be a zero-sum game and that Ukraine should not face a choice of East versus West, but that's not an easy case to make.

Secretary of State John Kerry says he called his Russian counterpart, Sergey Lavrov, to say he wants to work together to calm tensions in Ukraine.

"I asked specifically that Russia work with the United States and with our friends and allies in order to support Ukraine to rebuild unity, security and a healthy economy," Kerry said.

He says he received assurances from Moscow that it will respect Ukraine's territorial integrity, that its military exercises, long planned, are not aimed at Ukraine, and that it had nothing to do with the Russian flags raised over a local parliament building seized by armed gangs in Ukraine's Crimean peninsula.

"We will look to Russia for the choices that it makes in the next days for their confirmation of these statements," Kerry said. "Statements are statements, words are words; we have all learned that it's actions and the follow-on choices that make the greatest difference."

Kerry insists this should not be a Cold War story — a struggle between East and West — but there's a great deal of mistrust of Russia in Washington.

Sen. Bob Corker of Tennessee says he has been hearing rumors that Russia might offer passports to Ukrainians who feel more aligned with Moscow. That's what Russia did in a separatist region in another former Soviet republic, Georgia, before Moscow invaded in 2008.

How Ukraine's Presidential Documents Got Online So Fast

"I was the first U.S. official to fly to Tbilisi when Russia came into Georgia, and the first official to go up to Gori to witness the bombings and what Russia had done with their tanks and other artillery," Corker said. "What you see happening right now in Ukraine brings back those memories."

At a breakfast organized by The Christian Science Monitor, Corker pointed out that Russia has even deeper interests in Ukraine than in Georgia, particularly in Crimea, where Russia's Black Sea Fleet is based. The Senate Foreign Relations Committee member says it is time for the U.S. to stand up to Russia and deter it from seeking, as he puts it, a soft partition of Ukraine.

"Right now it appears that the president really doesn't have a plan," he said. "Not to be pejorative, but as with so many other foreign policy crises, it seems that we're catching up and dealing with events ad hoc as they move along."

The big question hanging over Ukraine now is the economy. That's an issue Kerry discussed with his German counterpart, just back from Kiev. Frank-Walter Steinmeier said Ukraine needs to carry out reforms recommended by the International Monetary Fund, and it needs a reprieve from this dispute between East and West.

"The government now has to furnish proof of the fact that it is the government of the whole of Ukraine: the North, the South, the East and the West," Steinmeier said, "[and] that they actually stand up for all those parts of the country."

While the U.S. welcomed a new technocratic government in Ukraine, Russia dismissed it as "a government of winners" that includes what it calls "extreme nationalists."