Accessibility links
My (Brief) Detention By Iran's Morality Police : Parallels NPR's Deborah Amos had a recent run-in with the "morals police" in Tehran. Her three-hour confinement revealed the gap between the enforcers and a generation chafing under strict behavior codes. 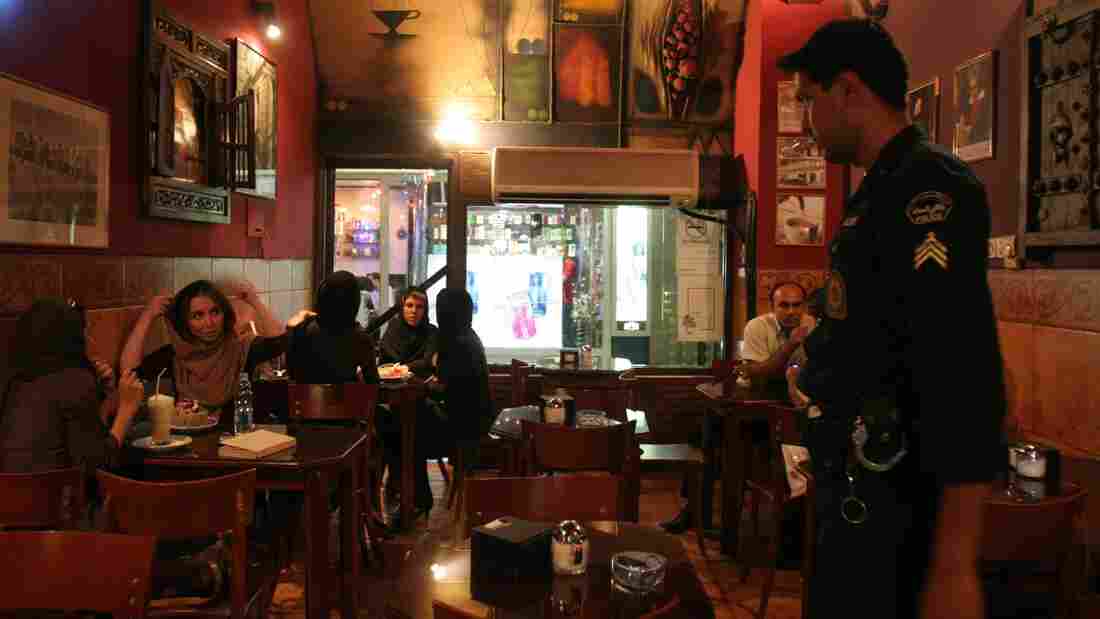 A woman adjusts her scarf after seeing the morality police in a cafe during a crackdown on "social corruption" in Iran's capital Tehran in 2008. Reuters/Landov hide caption 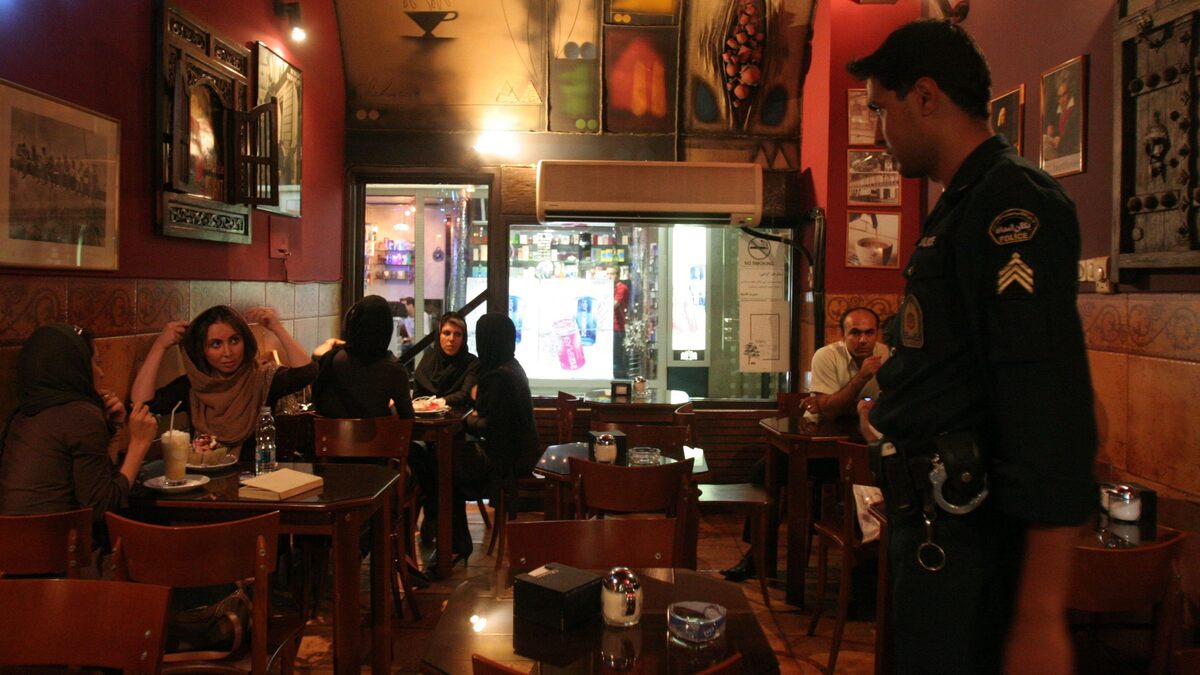 A woman adjusts her scarf after seeing the morality police in a cafe during a crackdown on "social corruption" in Iran's capital Tehran in 2008.

On my third day in Tehran last week, I was detained by Iran's notorious "morals police." This volunteer corps, with a presence in nearly every city and town, polices infractions against Islamic values. These guardians patrol parks, recreation centers, shopping malls and cafes where young people gather.

My introduction to the morality squad began with shouts and threats and ended with fruit juice and a hug from a lady cop in a black chador that covered bleached blond hair and a snug red leather jacket.

She headed the women's detention room in the gender-segregated station. My three-hour stay was a revealing look at the gap between these so-called Islamic enforcers and a younger generation chafing under Iran's strict behavior codes.

Iran's new president, Hassan Rouhani, had the backing of many Iranians when he said the morals police "antagonize our society." Within a few months of his election, he barred them from arresting women for what religious hardliners consider "inappropriate dress." 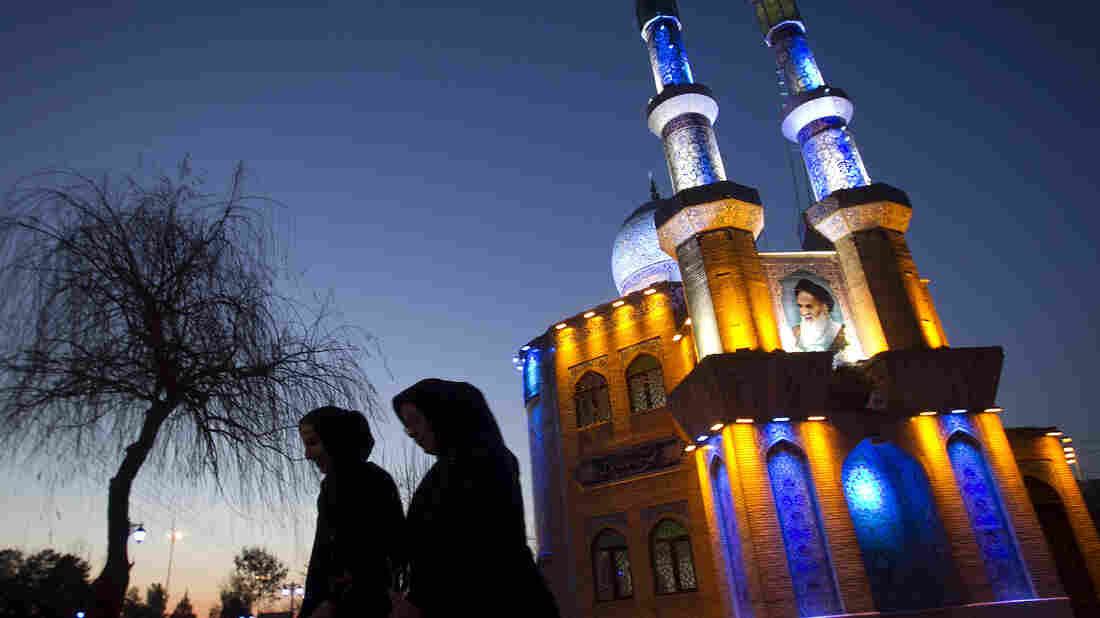 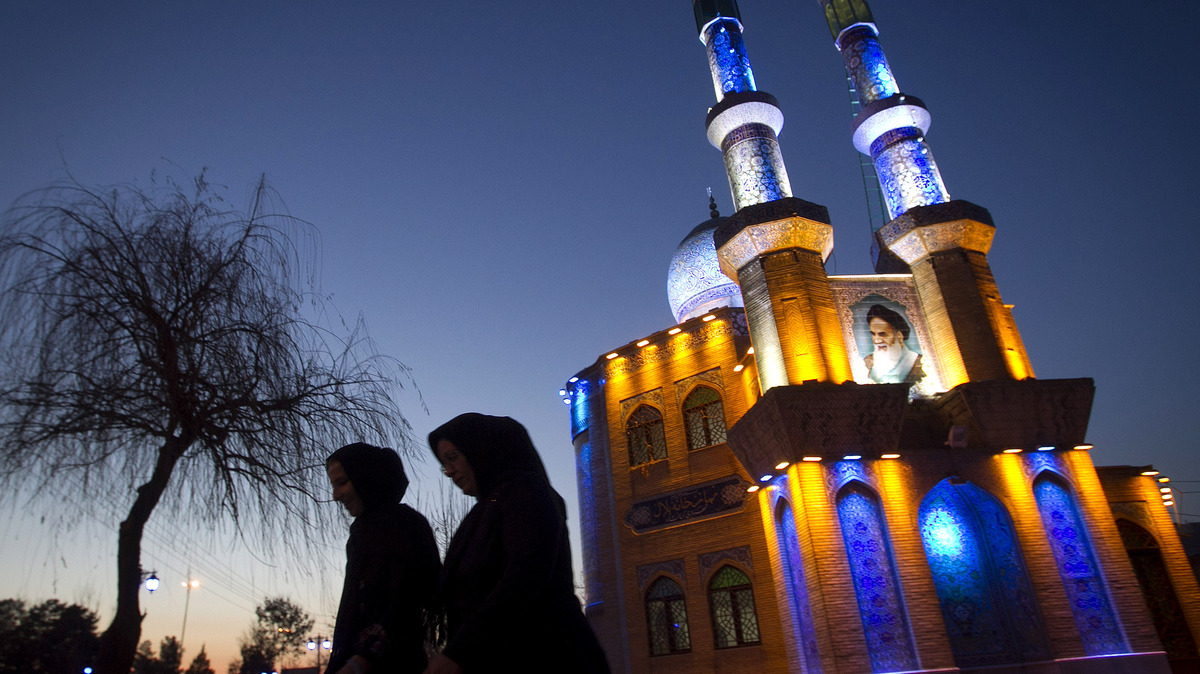 Two Iranian women walk past a mosque in the western city of Kermanshah, Iran, last month.

But women can still risk detention for getting caught with a male "acquaintance" who is not a husband or close relative. This was the offense that brought me to the station at sunset when my translator, Ahmed Saremi, got a call from his 24-year-old daughter. She'd been busted for having tea with her boyfriend in a city park.

Her frantic cellphone calls came as we were driving around the city for interview appointments. This professional translator suddenly became an anxious father as he listened to his daughter's angry description of the confrontation and her detention.

Only a few hours earlier, Saremi had assured me that this kind of thing was now rare after Rouhani's election. When he called the officer in charge, he said, "I just told an American reporter that the morality police don't do this anymore."

As it turned out, I was the most cooperative of the bunch. The head lady cop in the severe black chador gave me a carton of fruit juice and a hug before I turned to walk out the door.

The reply came quickly. "Why did you tell her that?"

Every country has busybodies. In Iran, they are organized and professionalized. The enforcers are volunteers. Some forgo salaries to perform what they consider a religious duty, but there are also valuable perks for their service, which include priority for college slots, bank loans and government jobs.

At the station house, Saremi demanded the release of his daughter. He argued that she had done nothing wrong. I pressed the record button on my tape recorder to document the conversation.

I knew I was in trouble after a sharp tug on my shoulder bag and then a shove inside the detention center. I showed my official Iranian government press card, but an angry officer shouted, "Give us your recorder or we will call your embassy and have you removed."

The standoff was over my concerns for the interviews I had recorded earlier in the day. I wanted to protect my material from an overzealous cop I suspected would erase the entire recording rather than search for the two-minute conversation in front of the station house.

When I held tight to the recorder, I was ushered into a small room with three other detainees and a squad of stern-looking female officers dressed in black flowing chadors. All of the women were sitting cross-legged on the carpeted floor. I was offered the only chair.

One of the young women spoke English. She was born in Iran but her parents had immigrated to Australia. She was back for the first time in more than a decade. She had been out sightseeing with a male cousin and stopped to take pictures in a park. Busted. The other two had been picked up with their boyfriends.

Arguments Between Police And The Detained

The contrast between the detainees and the chador-wearing female guards was striking.

The arguments started as soon as I entered the room.

At Iranian Colleges, Some See Brighter Future In Another Country

"You have no right to harass us!" they added.

This was the gist of the heated challenge, pieced together from body language, pointed fingers and eye rolling from the two young women sitting on the floor.

Iran's President Rouhani Gets The Benefit Of The Doubt, For Now

I had to interpret their defiance because the chador-wearing officer signaled to the woman from Australia that she shouldn't tell me what was going on. But there was no doubt that Rouhani's challenge to the morality police gave these young women license for their own face-to-face dissent.

After Saremi's daughter was released, he told me the officers were good people. But he added, "Hardliners are giving them instructions that are isolating them from the rest of society."

He explained to the officer in charge that he saw no harm in allowing his daughter to meet her boyfriend in a public park. He has already allowed his daughter, a recent college graduate in computer programming, to travel to Europe on her own. This is one of the reasons for Iran's skyrocketing divorce rate, Saremi assured me: Young people don't know each other before they marry.

After two hours of debate with the morals police, Saremi's daughter was free to go.

"When I talk to them, I feel they are from another century," he said.

The resolution to my case came with the assistance of the head female guard. We borrowed headphones from one of the other detainees, and I played her the two-minute recording I had made in front of the station house. She watched me delete it. I was now free to go.

The male officer in charge came to say goodbye. "I hope you are not unhappy," he said. Then, to my surprise, he added, "We wanted to buy you a gift, but the shops are all closed."

The detainees and the parents who had come to demand the release of their children had berated these officers. As it turned out, I was the most cooperative of the bunch. The head lady cop in the severe black chador gave me a carton of fruit juice and a hug before I turned to walk out the door.