Accessibility links
Iranian Women Make A Push For Greater Opportunities : Parallels A new bloom of activist movements have been spurred by the election of President Hassan Rouhani. And women — many of them educated but without job prospects — are at the forefront. 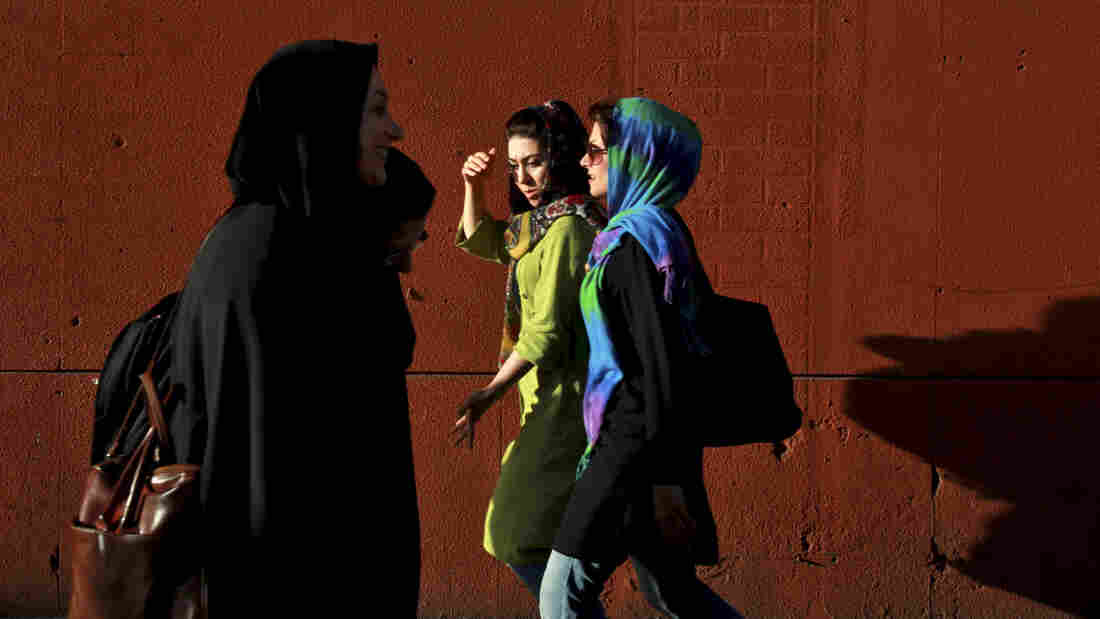 Iranian women, shown here in downtown Tehran, are among groups in the country pushing for social and economic change. Ebrahim Noroozi/AP hide caption 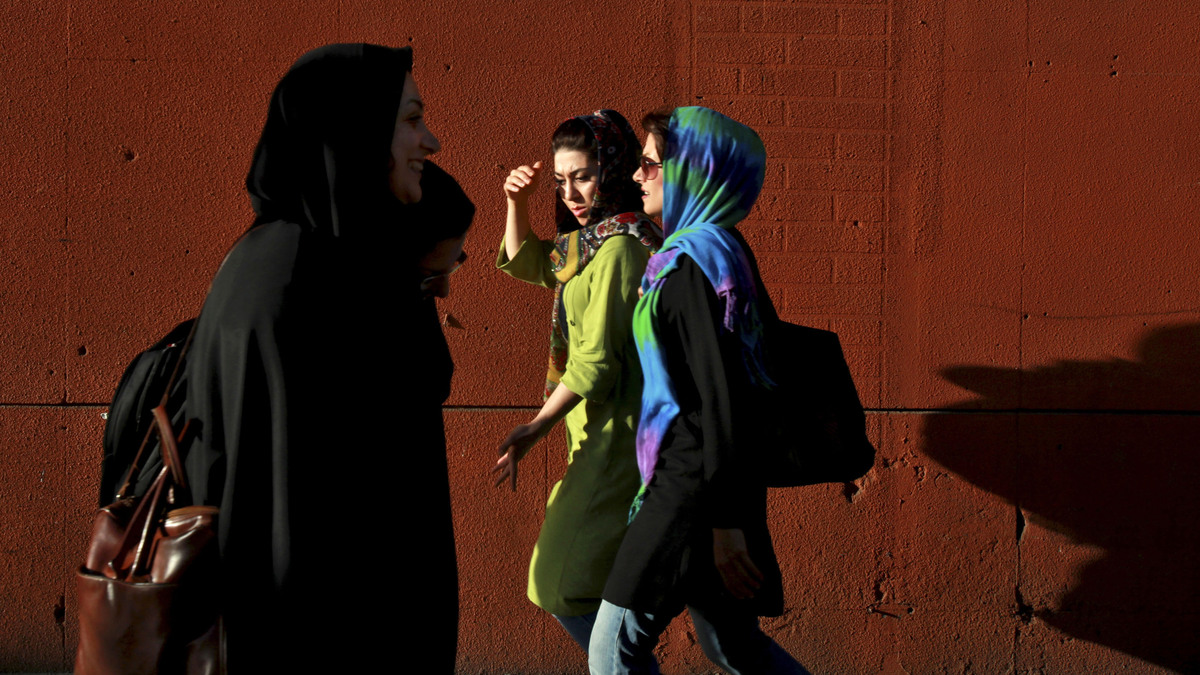 Iranian women, shown here in downtown Tehran, are among groups in the country pushing for social and economic change.

Iran is starting to see a re-launch of activist groups following the election last year of President Hassan Rouhani. Social movements were scarce after the government crushed public protests known as the Green Movement following the 2009 elections. After the decisive vote for Rouhani, a surge of hope in Iran has attracted activists back to the political arena. Iranian women, in particular, are seizing the opportunity.

On a recent afternoon in north Tehran, two professional women huddle with an adviser to the Ministry of Mines and Trade. They are building a strategy for promoting jobs for women in government and the private sector.

This would have been impossible under the previous president, Mahmoud Ahmadinejad, explains Sohaila Jelodorzadeh, a former member of parliament, now a professor of textile engineering. "We were ignored," she says, adding, "No, it was more than ignored. We faced social and political problems."

Now, she is politically active again, working with Soraya Maknoon, a former university chancellor, to champion women's employment. Women make up more than 60 percent of the college population in Iran but less than 20 percent of the working population.

"We want to make better use of their knowledge. This is important, not just to have degrees," says Maknoon.

It is just one example of a trend in Iran, says Kevan Harris, an Iran specialist from Princeton University. "Urban issues, pollution issues, environmental issues, women's issues" — Iranians are forming groups to tackle the major problems facing the country, he says. "The universities now are back, full of student politics, so we are going through a wave of mobilization from below in Iran."

The gender gap in employment may be one of the toughest challenges despite a huge social shift on college campuses. After the 1979 revolution, Iran's Islamic government convinced even the most traditional families that it was safe to send their daughters away to college.

The shift is obvious on the campus of Tehran University, where women outnumber men in the campus courtyard and in the classrooms.

"I study sociology. I would like to study in the major of law to find a good job," says Farzoneh Natalie, a 24-year-old graduate student. But when I ask about her prospects for a job in a law office after graduation, she shakes her head no.

Not in Iran, she says. She says she's thinking about going abroad for a job.

It's the choice for many university students. Every year about 150,000 highly talented Iranians emigrate in what the International Monetary Fund calls the highest brain drain in the world.

Rouhani is trying to reverse the trend and lure them back as he rebuilds an economy in critical condition after two years of devastating international sanctions and eight years of economic mismanagement under the former president.

Rouhani will be judged on Iran's economic revival, says Saeed Laylez, a political analyst and reformist, and he needs more women in the workplace.

"He has no other choice," Laylez says. "Women have better education than the men."

Laylez and many civil activists object to a new population plan moving through parliament that will limit opportunities for women in education and employment. The plan has the backing of the Supreme Leader Ayatollah Ali Khamenei. 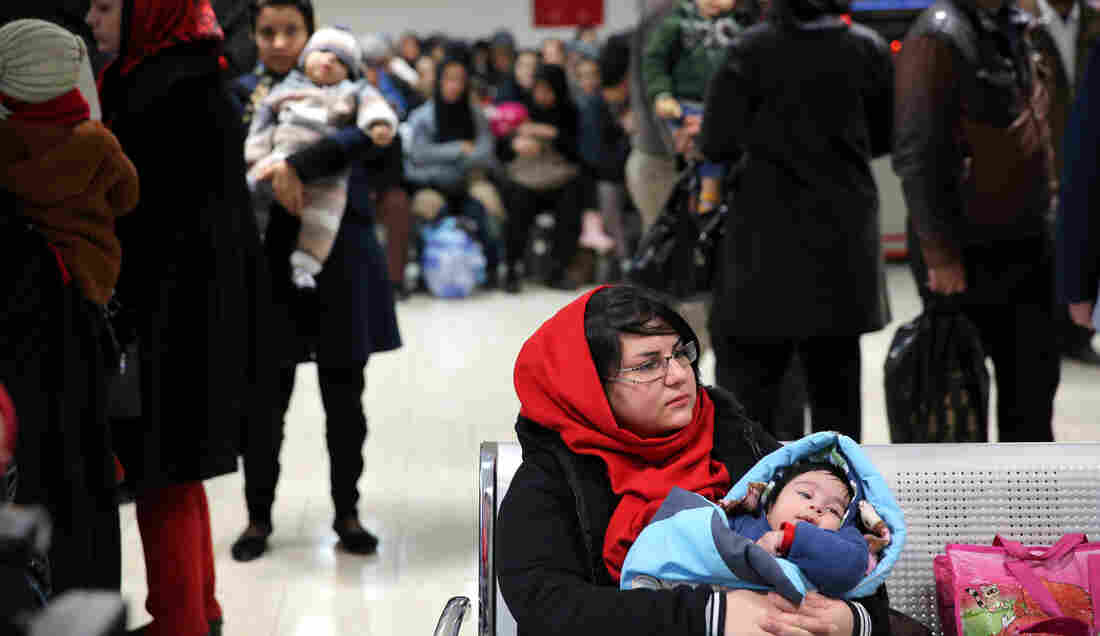 An Iranian woman holds her child at the Mofid Children's Hospital in Tehran, Iran. Having curbed birth rates for two decades, Iran is once again promoting a baby boom to help make up for its graying population. Ebrahim Noroozi/AP hide caption 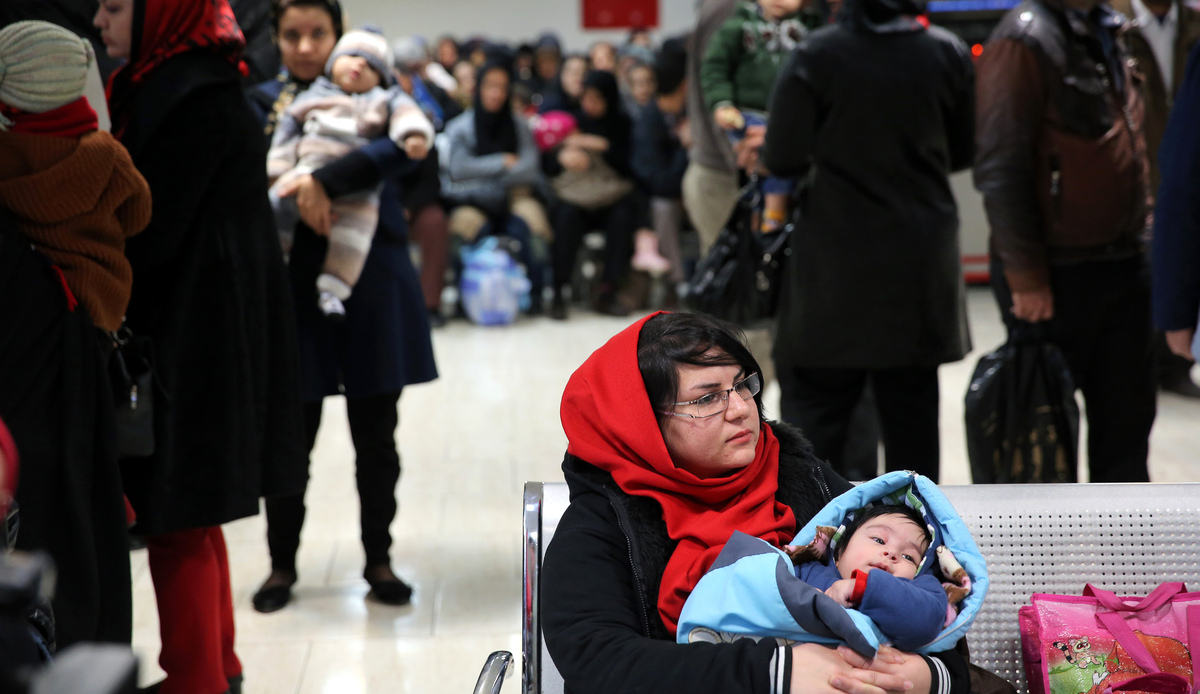 An Iranian woman holds her child at the Mofid Children's Hospital in Tehran, Iran. Having curbed birth rates for two decades, Iran is once again promoting a baby boom to help make up for its graying population.

Laylez agrees with the assessment of Iran's demographics. The population is aging, and with an average of two children per family, in a few decades the old will outnumber the young, resembling the demographics of Italy and Germany.

"The main policy should not be, in my opinion, to make more babies," he says. "It should be to make more wealth. The people of Iran are at the best age for creating wealth."

Rouhani has talked about creating more opportunities for the young, to reverse the flagging economy blighted by high unemployment, inflation and sanctions aimed at halting Iran's nuclear program. But women don't yet see change, says Harris.

"The problem is that the backlash is not only coming from guys with turbans," Harris says, referring to hardline clerics. Iran is a male-dominated society, he explains. "A lot of men don't want women in the workplace, especially when they think it's costing male jobs."

Iranian women have worked hard to overtake men in education, but in this conservative society, it's a long road to match that success in the workplace.