Accessibility links
Sanctions On Russia: Why The Europeans May Say Nyet : Parallels The U.S. has threatened sanctions following Russia's actions in Crimea, but European countries have been more circumspect. Part of the reason: Europe's dependence on Russian money and energy.

Sanctions On Russia: Why The Europeans May Say Nyet

Sanctions On Russia: Why The Europeans May Say Nyet 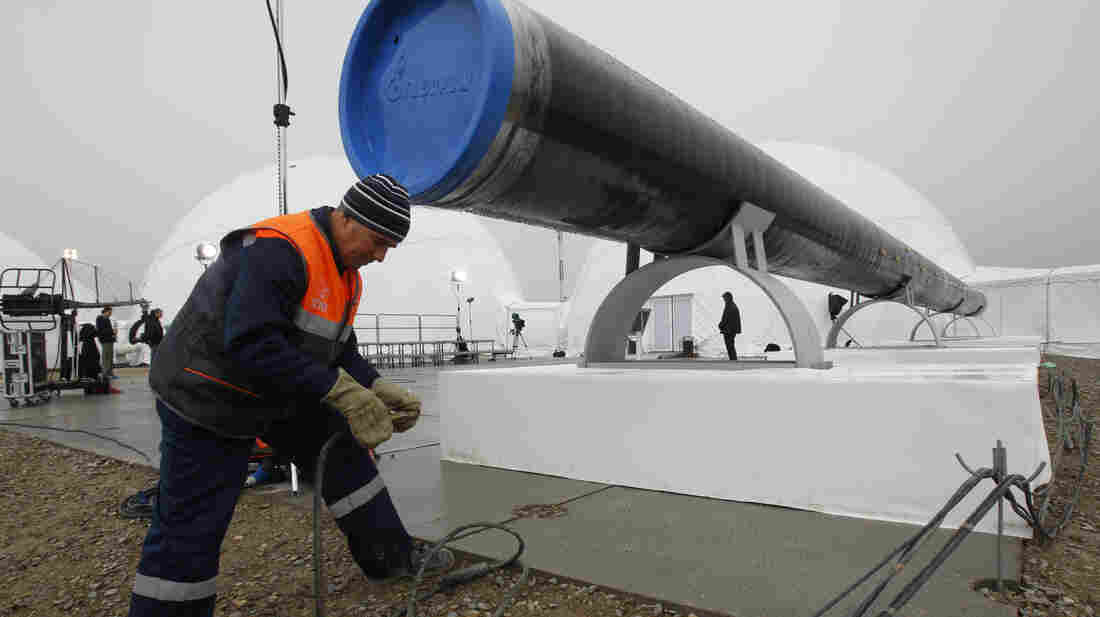 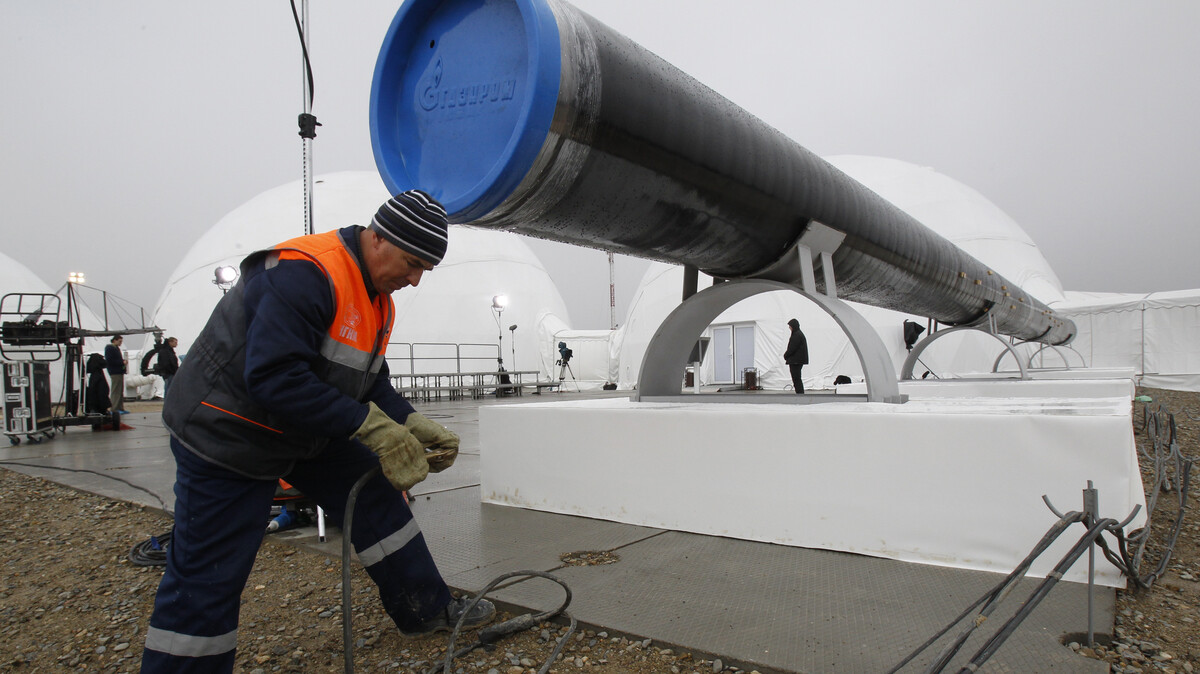 Ties between Russia and Europe are more than just gas.

Russia's seizure of Ukraine's Crimean Peninsula brought with it threats of U.S. sanctions, but Europe, while condemning President Vladimir Putin's actions, has been more circumspect. Part of the reason: Europe's dependence on Russian money and energy.

"It is a matter of simple economics," Alex Melikishvili, senior Europe/CIS Analyst at IHS Country Risk, said in an email.

He noted that the EU is Russia's main trade partner; bilateral trade is in hundreds of billion of dollars annually, in contrast with much lower U.S.-Russia trade (see chart).

"As a result, forging a coordinated response without harming vital economic interests of EU states who are also, to a large extent, dependent on Russian gas supplies ... is a complicated and time-consuming effort," he said.

Here's the potential impact that sanctions could have on different European countries and Russia: 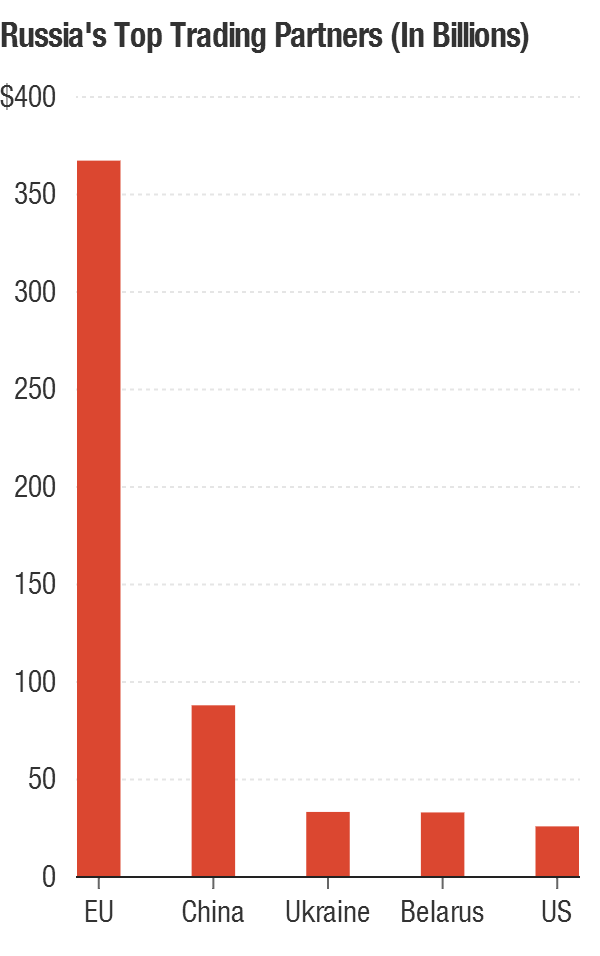 German Chancellor Angela Merkel, who reportedly told President Obama that Putin appears to be "in another world" on Ukraine, wants mediation to resolve the standoff, and is seen as "the crucial European player in the Ukraine-Russia conundrum."

Russia is Germany's top supplier of natural gas. Much of that gas travels to Europe via pipelines that run through Ukraine.

Russia and Ukraine have had disputes in the past when Ukraine has fallen behind in its gas payments. Moscow has threatened to turn off the taps but has not done so, presumably because of the impact it would have not just on Ukraine, but also on customers that pay more reliably, such as Germany and other countries in Europe.

A British document, photographed by a freelance photographer, says the U.K. should "not support, for now, trade sanctions ... or close London's financial centre to Russians."

That's probably because London is seen a safe haven by many Russian oligarchs. According to one recent study, Russians bought 8.5 percent of all London properties worth more than $4.17 million from March 2012-March 2013. That sort of buying has created a property bubble in the U.K. capital, one that could deflate if there are broad economic sanctions on Russia.

Britain, slowly recovering from the global economic crisis of 2008, needs the money. In fact, it even auctions off the right to live in the country for 1 million pounds (about $1.7 million). Since 2008, 433 Russian millionaires have come to the U.K. using that scheme.

An EU communique released Monday condemned Russia's actions but took just one step – suspending Russia's participation in the G8 summit in Sochi in June. If Russia doesn't reverse course in Ukraine, the EU said, it could suspend talks on a visa program that would make it easier for Russians to visit European countries.

But individual states are reluctant: Austrian and French banks are heavily exposed to the Russian market. The Economist notes that a proposal for an arms embargo was scrapped because of objections from France, which has lucrative defense deals with Russia. And one Italian official told the magazine: "What sanctions can you place on a country that can cut off your gas?"

Russia is now part of the global economy.

"Modern Russia is not Soviet Union," notes Melikishvili, of IHS.

The EU is Russia's top trading partner, accounting for more than 40 percent of all trade. Much of that is energy: 84 percent of Russia's oil exports and about 76 percent of gas exports go to Western Europe.

European companies have invested heavily in the country, creating jobs and consumers. Also, Russia's elites have tens of billions of dollars stashed overseas. Any multilateral sanctions regime will have an impact. Indeed, Russian stocks crashed Monday, wiping out $60 billion of their value, amid tensions on the Crimean Peninsula, though they have since rebounded.