Accessibility links
U.S. Ambassador Speaks Pidgin English; Nigerians Love It : Parallels Pidgin English is a second language for tens of millions of Nigerians, but it's not every day that you hear a diplomat speaking it. The U.S. ambassador recently gave it a shot in a radio interview. 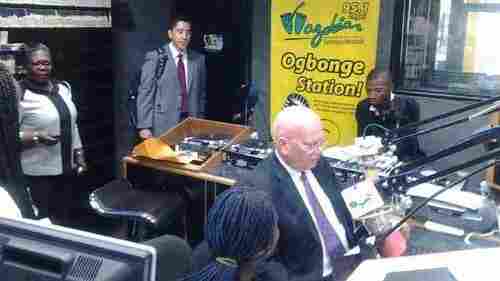 It's not often that a broadcast interview by a diplomat wows listeners, but a recent conversation involving the American ambassador to Nigeria, James F. Entwistle, is causing a buzz – and winning applause.

The praise is not so much for the content of the interview or the pressing issues the ambassador discusses. It's more for the language in which he chose to express himself: pidgin English.

Pidgin, or broken English, is the popular lingua franca spoken throughout West Africa. The patois cuts across Nigeria, the continent's most populous nation, which is home to hundreds of local languages, making it easier for millions of Nigerians from different parts of the country to communicate.

Entwistle was recently interviewed by Nigeria's Wazobia FM, the first radio station in Nigeria to broadcast in pidgin English. He was asked about Nigeria's controversial new anti-gay legislation and whether the U.S. might impose sanctions.

"The U.S. government no say sanction go dey for Nigeria, because of same-sex palava-o," Entwistle said.

In other words, the U.S. is not going to impose sanctions on Nigeria for passing a law criminalizing same-sex marriages.

A Surprise Call From The Embassy

It's not often that Westerners learn to speak, and master, pidgin.

So Onimisi "OJ" Adaba, the coordinating manager of Wazobia FM, says he was surprised when he received a call from the American Embassy suggesting the live studio interview in pidgin with the new ambassador.

He sold himself into the hearts of many Nigerians. That's quite a plus for the American Embassy.

"I'm like, 'Wait a minute, Wazobia? I mean, we're talking about the U.S. ambassador! Does he speak pidgin in the first place?'" Adaba said.

Adaba was told the ambassador was practicing, trying to pick up things from here and there. "And I'm like, 'OK, it's worth giving a shot,'" he said.

Omotunde "Lolo" David, the host, was delighted to converse in pidgin with the American diplomat live on the air. She's a self-confessed aficionado of pidgin and says, though it may not be the language of diplomacy, it reaches people at the grassroots level.

"When we're talking about reaching everyone, pidgin English is a language just like our culture; a language like the beautiful clothing that we wear, very colorful, very expressive. It's a very beautiful language," David said.

David says pidgin is inventive, humorous, clever and curious — a rich language that eschews class and creed and is spoken by everyone in Nigeria, with regional variations.

"It's an evolving language," she said, "a language that has a life of its own."

And it's the language that Entwistle chose to speak, he says, because "if you want people to understand the United States and where we're coming from, you have to go where they live linguistically speaking. You have to be able to communicate."

Handling A Range Of Questions

Sometimes as a diplomat, Entwistle says, "you get stuck in this government-dealing-with-government rut."

"You have to remember that your job is also to get out and understand the country and the people," he says.

And so, David and Wazobia FM callers asked the American ambassador a range of questions – including one about next year's much-anticipated elections in Nigeria. Incumbent President Goodluck Jonathan's party is expected to be pushed hard by the opposition, and they wanted to know the U.S. position on the vote.

"Make I tell you say U.S. no get any candidate for mind. The only ting wey go sweet us be say make the election dey transparent, credible and concluded," Entwistle said in Pidgin. "Make Nigerians pick candidates wey go sweet their belle, wey go do well well for them."

Did you get that? Here's a translation:

"Washington does not have a preferred presidential candidate. Just let Nigeria's elections be transparent and credible, and Nigerians should choose a candidate who will do them proud."

Sounds rather bland in translation, doesn't it? There's no mention of something literally making your stomach sweet (i.e., that you like it) or repetition of the word "well" for emphasis.

Wazobia's David and Adaba both praised the ambassador for being a good sport and for making the effort.

"He sold himself into the hearts of many Nigerians," David says. "That's quite a plus for the American Embassy."