Accessibility links
What If Ukraine Still Had Nuclear Weapons? : Parallels Ukraine gave up its nuclear weapons two decades ago when Russia and the U.S. pledged to respect its sovereignty. Amid the current crisis with Russia, some Ukrainians now say that was a mistake.

What If Ukraine Still Had Nuclear Weapons?

What If Ukraine Still Had Nuclear Weapons? 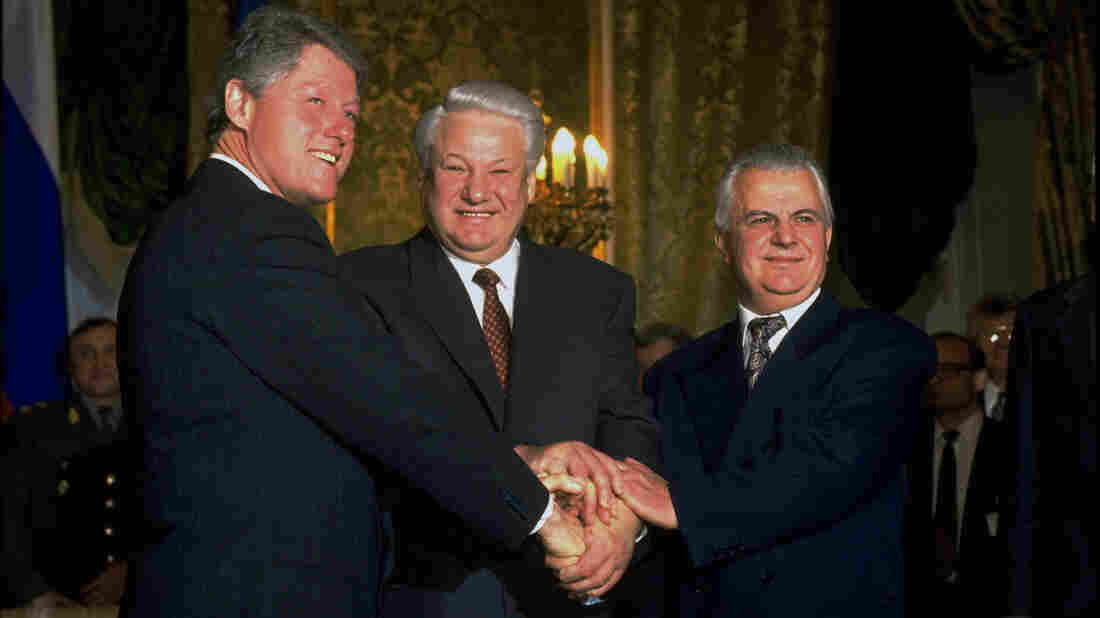 President Bill Clinton (from left), Russian President Boris Yeltsin and Ukrainian President Leonid Kravchuk, clasp hands after signing documents whereby the U.S. and Russia agreed to stop aiming long range nuclear missiles at each other, and the Ukraine agreed to dismantle all of its 1,800 nuclear warheads. The event took place on Jan. 14, 1994, at the Kremlin in Moscow. Diana Walker/Time hide caption 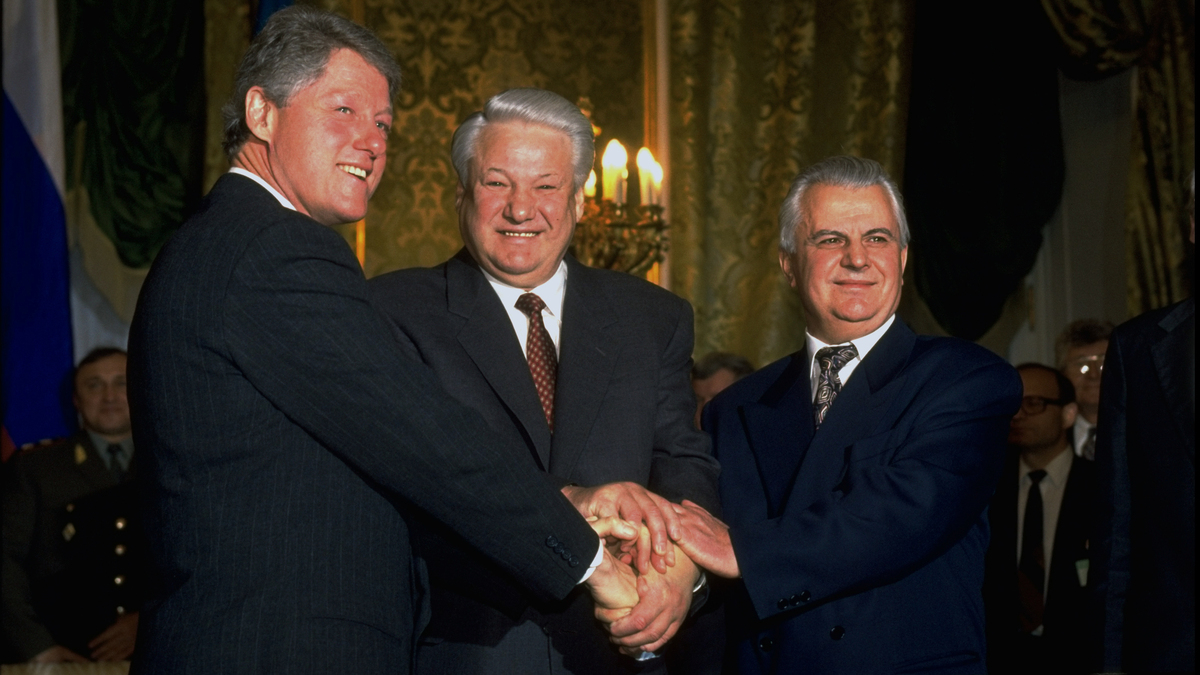 President Bill Clinton (from left), Russian President Boris Yeltsin and Ukrainian President Leonid Kravchuk, clasp hands after signing documents whereby the U.S. and Russia agreed to stop aiming long range nuclear missiles at each other, and the Ukraine agreed to dismantle all of its 1,800 nuclear warheads. The event took place on Jan. 14, 1994, at the Kremlin in Moscow.

Ukraine appears rather helpless in the face of the Russian intervention in Crimea. But what if Ukraine still had nuclear weapons? The confrontation might look rather different, and perhaps much scarier.

When Ukraine gained independence in the 1991 breakup of the Soviet Union, it inherited a nuclear arsenal that included some 1,800 warheads, making it the third largest in the world, trailing only Russia and the U.S.

Ukraine could have clung to those weapons at a time when it and many other former Soviet states faced varying degrees of turmoil. But in 1994, Ukraine agreed to relinquish them and eventually sent the warheads by train to Russia. In return, Ukraine got assurances its sovereignty would be respected.

At the time, the Budapest Memorandums on Security Assurances seemed like a win for everyone.

The agreement symbolized the new possibilities of cooperation in a post-Cold War world. A major nuclear arsenal was being destroyed. The newly independent Ukraine received promises that the signatories would "refrain from the threat or use of force against the territorial integrity or political independence of Ukraine."

Today, that memorandum looks rather flimsy in the face of the effective Russian takeover in Crimea. And events in Ukraine may also send a strong signal to countries like North Korea about the value of maintaining a nuclear arsenal as a deterrent.

Some Ukrainians Wish They Still Had Nukes

"We gave up nuclear weapons because of this agreement," Pavlo Rizanenko, a member of the Ukrainian parliament, told USA Today. "Now there's a strong sentiment in Ukraine that we made a big mistake."

"In the future, no matter how the situation is resolved in Crimea, we need a much stronger Ukraine," Rizanenko added. "If you have nuclear weapons, people don't invade you."

Perhaps Russia would have changed its calculations and shown more restraint if it knew it was dealing with a nuclear nation. Then again, the current crisis would potentially be even more dangerous if Russia had intervened and Ukraine had nuclear arms.

India and Pakistan are both nuclear nations and whenever tensions rise, usually over the disputed region of Kashmir, a relatively small skirmish can raise the specter of a nuclear confrontation. A regional problem can instantly take on much greater dimensions.

The Obama administration has imposed some punitive measures against Russia and is discussing the possibility of stronger sanctions. But there's been no mention of possible military force.

No Promise Of Military Action

While Ukrainians may feel let down by the response in the West, the U.S. did not pledge to take military action under the 1994 memorandum, said Steven Pifer, who worked on the negotiations at the time and went on to be the U.S. ambassador to Ukraine from 1998 to 2000.

"I think it's very clear that Russia is in violation of its commitments," Pifer told Weekend All Things Considered. "What you see happening over the last week in Crimea is nothing less than a Russian military occupation of the peninsula.

"There's a very important reason why it's the Budapest Memorandum of Assurances and not of guarantees. We were very clear — and the Ukrainians understood this back in 1994 — that we were not going to use the word guarantee because we were not prepared to extend a military commitment."

So 20 years later, Ukraine can no longer play the nuclear card. But Russia can.

Russia's Ministry of Defense said Saturday that it may halt international inspections of its nuclear weapons in response to sanctions threats from the U.S. and other Western countries. The inspections are part of the START nuclear treaty that the U.S. and Russia signed in 2010.