Accessibility links
Which Place Is More Sexist: The Middle East Or Latin America? : Parallels On the surface, the two regions couldn't be more different. But both impose their burdens on women and have plenty of sexism to go around. 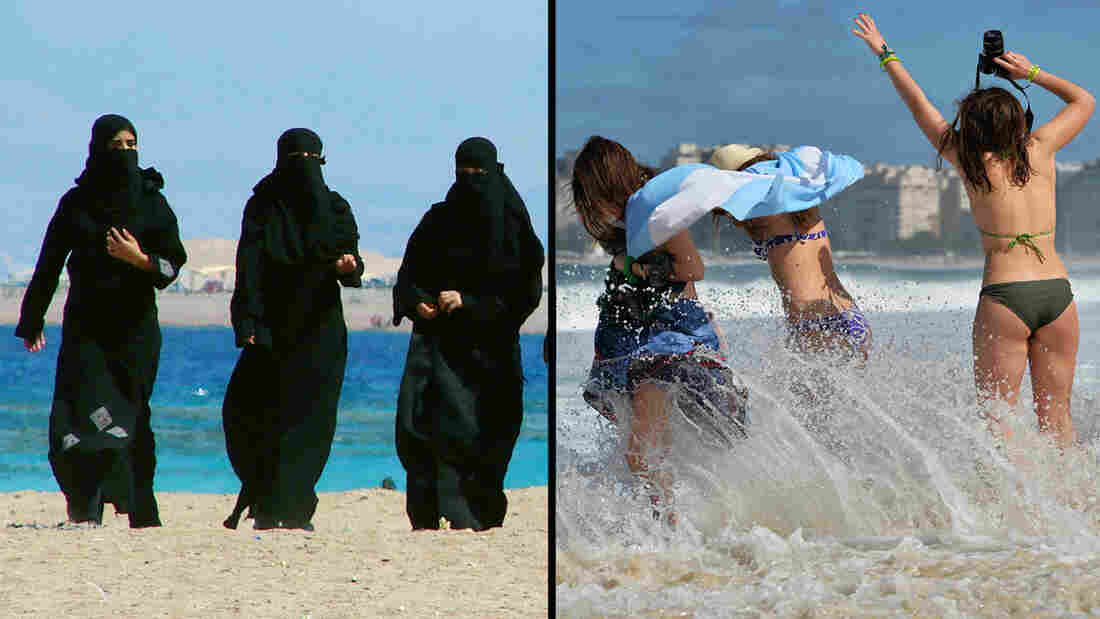 On the left: Women wearing burqas walk by the Gulf of Aqaba in Jordan in 2006. Right: Women in bikinis visit a beach in Rio de Janeiro in 2013. Marco Di Fabio and Nelson Almeida/Getty Images hide caption 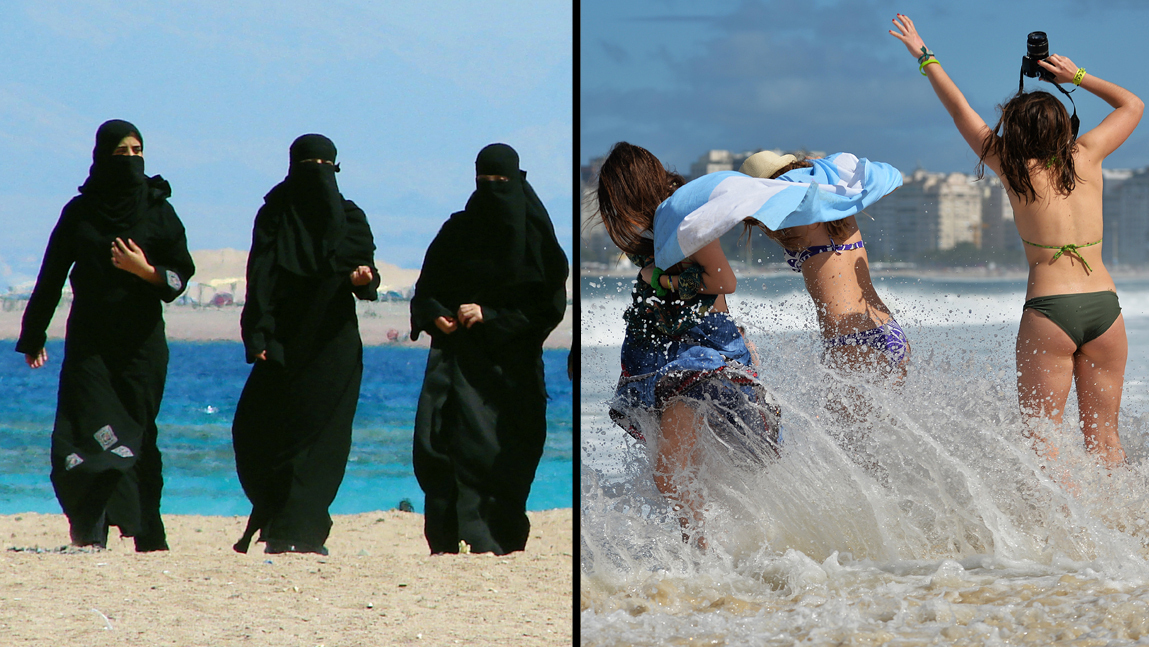 On the left: Women wearing burqas walk by the Gulf of Aqaba in Jordan in 2006. Right: Women in bikinis visit a beach in Rio de Janeiro in 2013.

A semi-naked woman in a sequined Carnival costume. A veiled woman with only her eyes showing in a niqab. Two stereotypes of two vastly different regions — Latin America and the Middle East.

On the surface, these two images couldn't be more diametrically opposed. What could the two have in common, right? What a woman wears — or what she doesn't wear, in Brazil's case — is often interpreted as a sign of her emancipation. The veil, for many, is a symbol of female oppression; the right to wear a bikini, one of liberation.

As a woman and a foreigner who lived in Baghdad and Cairo and worked throughout the Middle East for years, I always felt the need to dress modestly and respectfully. Frankly, my recent move back to Latin America was initially a relief. Brazil is the land where less is more — and it was wonderful to put on whatever I wanted.

But underneath the sartorial differences, the Middle East and Latin America's most famously immodest country both impose their own burdens on women in the way they are treated and perceived.

On a recent balmy afternoon, I was sitting at a seafront kiosk watching Brazil's carnival coverage on the biggest broadcaster here, GLOBO. Suddenly, a naked woman popped onto the screen during a commercial break. She was wearing nothing. Literally nothing except a smile and some body glitter. Called the "globeleza," she is the symbol of GLOBO's festival coverage, and she appears at every commercial break.

Later programming showed a contest where women from various Samba schools — all of them black — were judged on their dancing and appearance by a panel that was all white. They all had their measurements read out for the crowd. But when one woman said she was studying at one of Brazil's premier petrochemical departments to eventually work in the oil and gas industry, the male judge smirked in surprise.

Brazil's Restrictions On Abortion May Get More Restrictive

The Role Of Women In Brazil

And that's the thing about Brazil: It has a female president, and women are well-represented in the work force. This isn't Saudi Arabia, where women cannot drive, or Afghanistan under the Taliban, where women could not study.

And yet it is one of the most dangerous countries to be female in.

Statistics show that about every two hours a woman is murdered in Brazil, a country with the seventh highest rate of violence against women in the world.

This juxtaposition of sex and violence isn't new, according to Rosana Schwartz, a historian and sociologist at Mackenzie Presbyterian University in Sao Paulo. Brazil imported more slaves than any other country in the Americas, and slavery was only abolished in 1888.

"The female slaves were used as sexual objects to initiate the master's son's sexuality or to satisfy him. And the result has been that until today, Brazilian women are seen in a sexist way, in a more sexualized way, because she was used as a sexual object for so long," Schwartz says.

The legacy still affects women of every class and race here.

In Brazil, women are second only to the U.S. in the amount of plastic surgeries they have and in the number of beauty products they consume.

In a recent article talking about vaginal reconstruction — yes, Brazil is a world leader in that cosmetic surgery, too — psychoanalyst Regina Navarro noted that there is a huge amount of pressure in Brazil to conform to an ideal.

"Women want to adapt to what they think men want," she told Brazil's Glamour magazine.

I recently spent some time at a leading international modeling agency in Sao Paulo. During the afternoon, waif-thin models came in with their amateur portfolios and big dreams. The girls were all in their early to mid-teens.

The main headhunter told me confidently that all young boys in Brazil wanted to be soccer stars, and all young women aspired to be models.

You can go to schools here and quickly learn that little girls are not encouraged to become the next Ronaldo. While Brazil is a global force in men's soccer, women's soccer in Brazil is almost nonexistent. But girls as young as 6 or 7 know which models are on the cover of magazines.

Which brings us to the recent controversy over Adidas. Clever marketers (presumably male) came up with two shirts that the World Cup sponsor was selling in advance of the games later this year.

One shows a woman in a bikini beside the slogan "Looking to Score in Brazil." The other says "I (Heart) Brazil," with the heart in the shape of a woman's backside in a thong bikini. After Brazil complained that the T-shirts were sexist, they were pulled.

But the objection smacked of selectivity, if not hypocrisy.

A column in Brazil's biggest daily, Folha de Sao Paulo, said: "Compared to the naked woman dancing on GLOBO TV every day during carnival, this is nothing. My 5-year-old daughter asked, 'Why is that woman dancing naked on TV, Dad?' And I had to explain that she was very warm. Our carnival coverage focuses exclusively on the female body, so by that standard these T-shirts are pretty tame."

The 2022 World Cup will be played in Qatar, a country that is not known for its sex appeal. Women's activists often target the Middle East for its policies toward women. But as living in Brazil has taught me, for women, even having all the freedom in the world can be its own cage.