Accessibility links
A Magnet For African Migrants, Italy Seeks A New Approach : Parallels Italy detains tens of thousands of illegal immigrants from North Africa and locks them up in harsh conditions. Now it is pushing to revamp the system at home with an eye toward a Europe-wide plan. 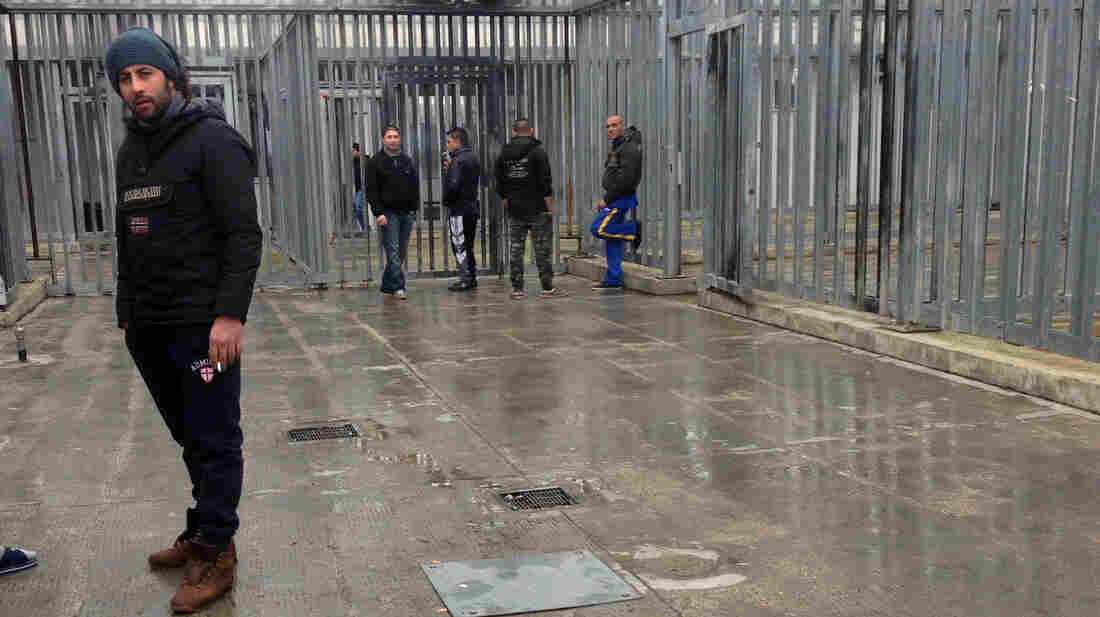 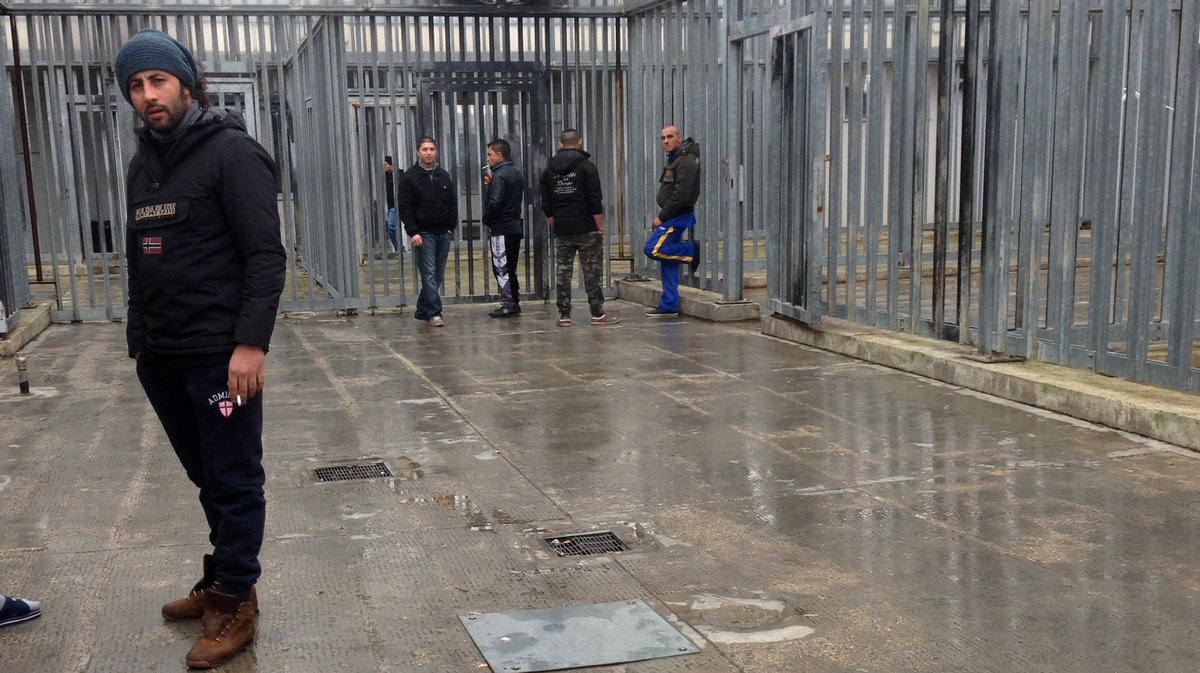 With mild weather ahead, southern Europe is once again bracing for new boatloads of would-be migrants and asylum seekers from North Africa.

Italy has borne the brunt of this migrant flow for two decades, and it has responded with one of Europe's most repressive laws on illegal immigration.

But now the Italian parliament is trying to scrap a law that has made migrants vulnerable to exploitation and human rights abuses. The existing law has also produced detention camps where undocumented migrants are held in harsh conditions.

One example is the Ponte Galeria camp, which is near Rome's international airport, surrounded by open fields. But inside it's grim and gray.

Detainees are locked behind bars in what look like cages. At the sight of visitors, they shout their various laments.

The camp has been in the media spotlight since late January when more than a dozen Moroccan migrants staged a demonstration.

The men had been working in Libya. When they asked to be paid, they say, their employer forced them onto a rickety vessel headed for Italy where they landed in October.

Three months later, detainee Hicham Marrach said, they resorted to a desperate form of protest: With fishing wire and sewing needles, they kept their lips stitched together for a week.

"We ended up in a place where we don't speak the language. We have no idea what will happen to us. We committed no crime and yet we end up in jail," he said. "Sewing our mouths shut was the only way to make ourselves heard." 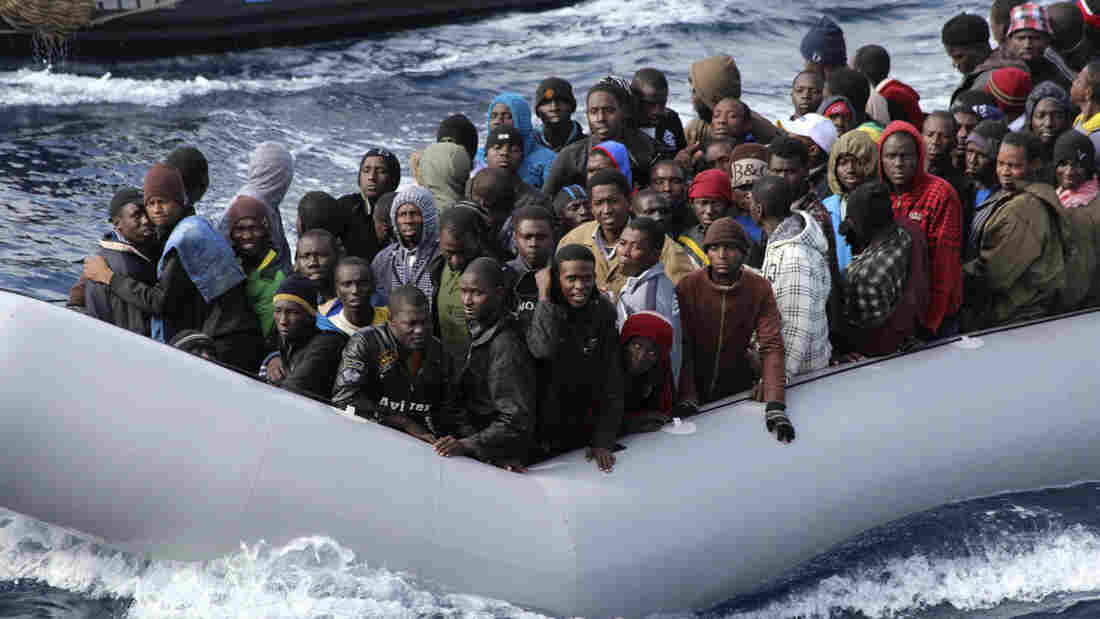 Migrants sit in a boat during a rescue operation by the Italian navy off the coast of Sicily on Nov. 28. Italy is looking to revamp the way it handles the hundreds of thousands of migrants who arrive annually. Reuters/Landov hide caption 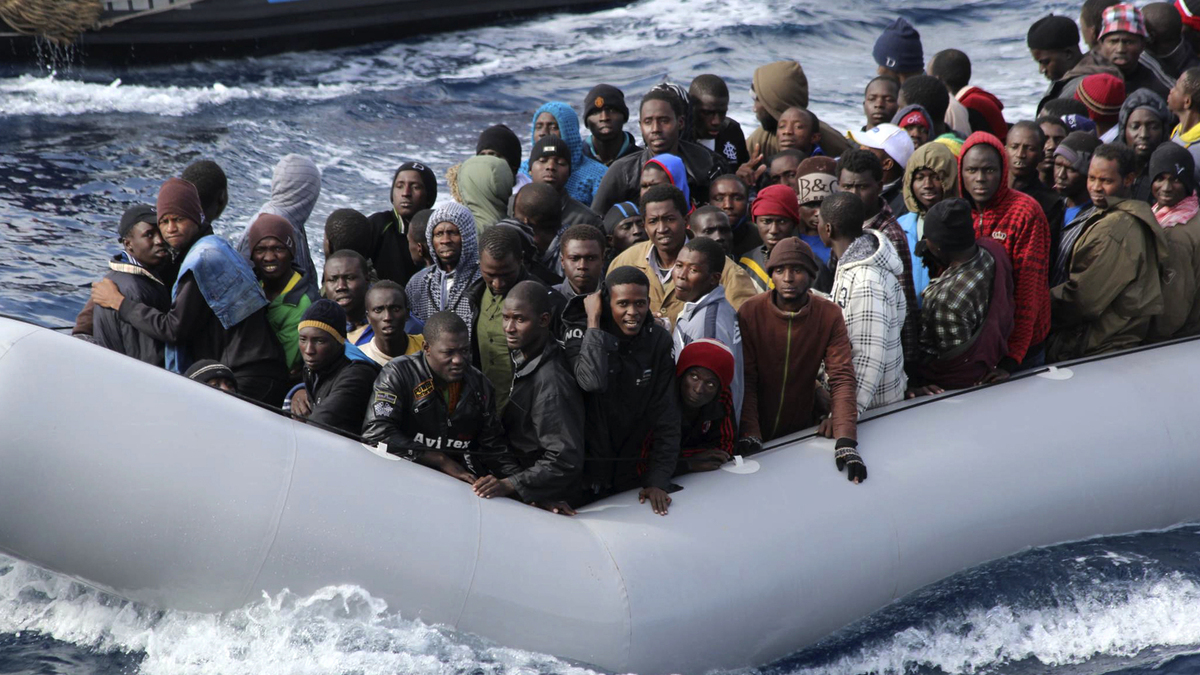 Migrants sit in a boat during a rescue operation by the Italian navy off the coast of Sicily on Nov. 28. Italy is looking to revamp the way it handles the hundreds of thousands of migrants who arrive annually.

Evans Omeo and his wife fled interreligious conflict in their native Nigeria. They were brought to Ponte Galeria after landing in Sicily in December, and were placed in segregated male-female sections of the camp.

If they are sent back home, he fears, his father-in-law will kill them because they are of different religions.

"I asked for asylum," he said, adding that he is Catholic while his wife is Muslim.

In a nearby caged area, 10 men live in a barracks-like room, including Bafouday Ceesay, 29, who's from Gambia and has lived in Italy for seven years. But when he lost his job, he also lost his permit to stay.

"Conditions here are very, very bad," he said. "Sometimes you don't get hot water; the heater, it doesn't go on sometimes. So it is cold. There's no nothing here. You don't go to school, you don't get work. You just sleep, eat."

Undocumented immigrants who end up in detention can by law be held for up to 18 months before being expelled. Those who say they are fleeing persecution complain that they're offered little or no assistance in navigating Italy's complex asylum legislation.

Doctors for Human Rights has visited all of Italy's 13 detention camps and issued a scathing report.

"Only 1 percent is actually expelled every year of total migrants, undocumented migrants, so what is the utility? It is like emptying the sea with a spoon," he said.

Khalid Chaouki, a lawmaker of the governing Democratic Party, is Italian-born of Moroccan parents.

"We are trying to reduce the detention period from 18 to two months and radically change management of the centers by establishing specific guidelines," he said.

But Chaouki says steps like demoting illegal immigration from a crime to an administrative violation is only a partial solution.

The real challenge, he said, is to legally recognize the many immigrants who work in agriculture, in factories and as caregivers. Many have formed families, put down roots and contribute to Italian society, he added.

As for the continuing wave of migrants, hundreds of thousands of people in Syria and sub-Saharan Africa are still trying to escape conflict.

When Italy takes over the EU's rotating chairmanship in June, Chaouki said, it will propose a European Union-wide agreement granting temporary humanitarian visas so that each member state can take in its share of asylum seekers.