Accessibility links
One Year Later, 'A Pope For All' Keeps Catholics Guessing : Parallels Following two doctrinally conservative leaders, Pope Francis' pastoral approach in his first year has given the Catholic Church a new glow. But it's still unclear where he intends to take the church. 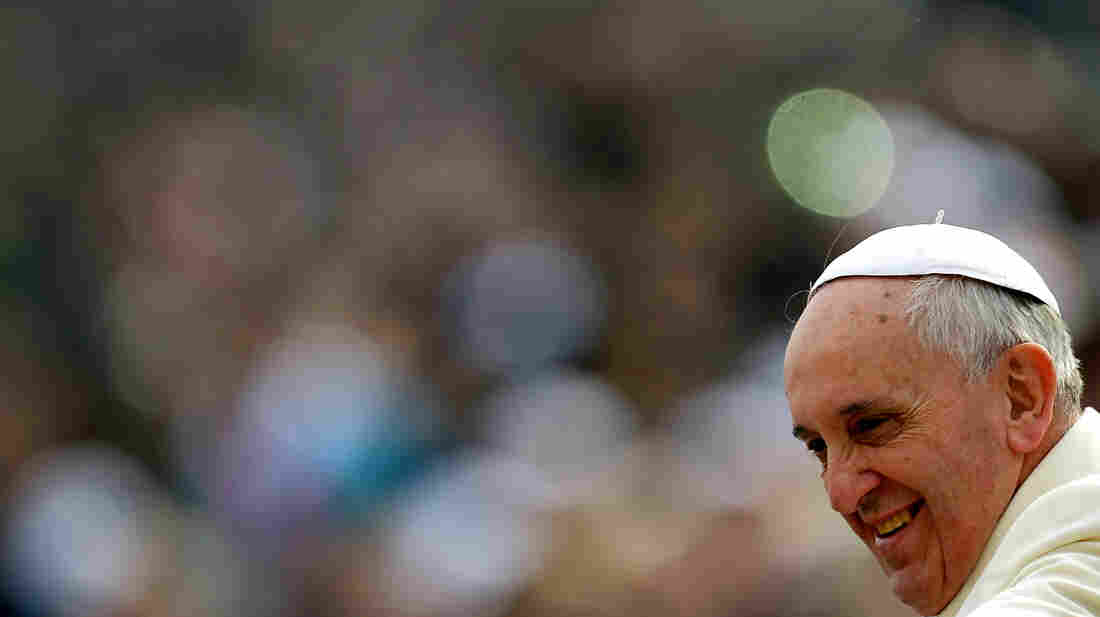 Pope Francis greets the crowd as he arrives for his general audience in St. Peter's Square at the Vatican last month. Vincenzo Pinto/AFP/Getty Images hide caption 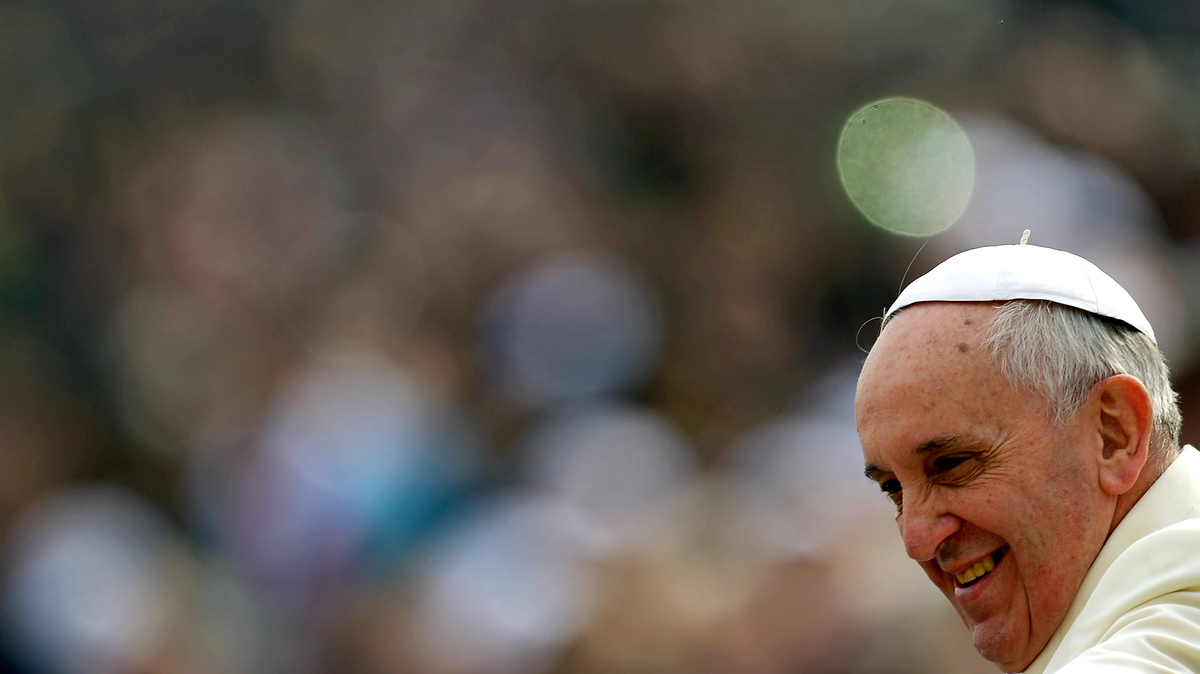 Pope Francis greets the crowd as he arrives for his general audience in St. Peter's Square at the Vatican last month.

A year ago today, the world's 1.2 billion Catholics got their first Jesuit pope and the first from the global south. Taking the name Francis, he soon became one of the world's most popular newsmakers.

Like many others in the big Sunday crowd in St. Peter's square, Sally Wilson is not Catholic, but she came all the way from Beaumont, Texas, to see the pope.

"I think his serving humanity and his love of people have an effect that makes him feel like he's a pope for all, not just for Catholics," Wilson says.

As soon as he was elected, Pope Francis asked the crowd to pray for him, revealing a humble streak that has won him global popularity. And he opted to live in a simple residence with other prelates, rather than isolate himself in the palatial papal apartment.

He seems to be talking to a more pastoral church rather than a political church.

Jon O'Brien of Catholics for Choice

Days later, he spoke wistfully of the kind of church he'd like to see, "Oh, how I would like a poor church, a church for the poor."

Over the past year, the Argentine pope has irritated some in the global north with his denunciation of laissez-faire capitalism and the ills of globalization. The pope has sent signals that he wants a more collegial governance of the church, and he has stunned Catholics with remarks that, for example, all human beings, even atheists, can be redeemed.

One comment in particular grabbed headlines across the world. "If a person is gay and is seeking God and is of good will, who am I to judge?" Francis said last summer.

"The way the pope sounds, what he says, sounds different," says Jon O'Brien, president of the liberal Catholics for Choice. "Gay people are not hearing they're intrinsically disordered anymore."

O'Brien says Francis has brought a huge change in tone and in emphasis. "He seems to be talking to a more pastoral church rather than a political church."

Francis has also shown humor and informality. At Vatican meetings, he waits in line with others during coffee breaks. Leaving the Holy See for a Lenten retreat, he joined the Vatican boys on the bus.

Father John Wauck, a professor at the Opus Dei Pontifical University of the Holy Cross in Rome, is a veteran papal watcher. Francis, he says, differs greatly from both of his predecessors.

"He is not a showman in the way John Paul was, and he's not retiring in the way Benedict was. Francis is completely comfortable in his own skin. He is transparently a happy person," Wauck says. "And it sounds really simplistic, but unfeigned happiness on the part of a public figure is not that common." 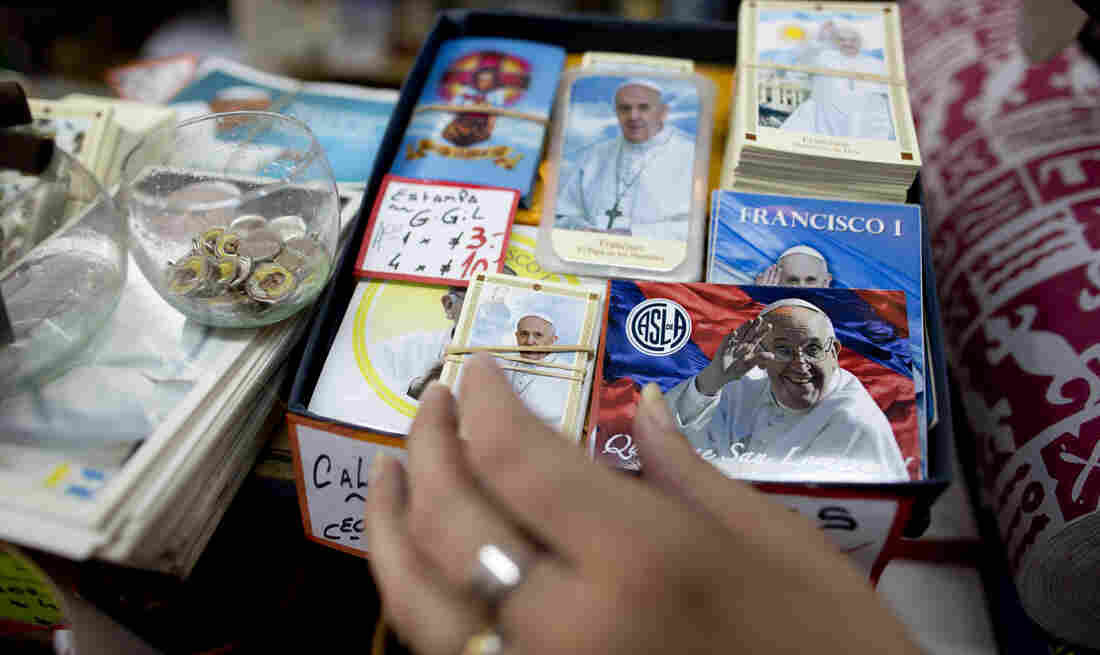 A box containing stamps, postcards and souvenir cards, adorned with the image of Pope Francis, on display at a shop in Buenos Aires, Argentina. In his first year as pope, Francis has endeared himself to the public. Natacha Pisarenko/AP hide caption 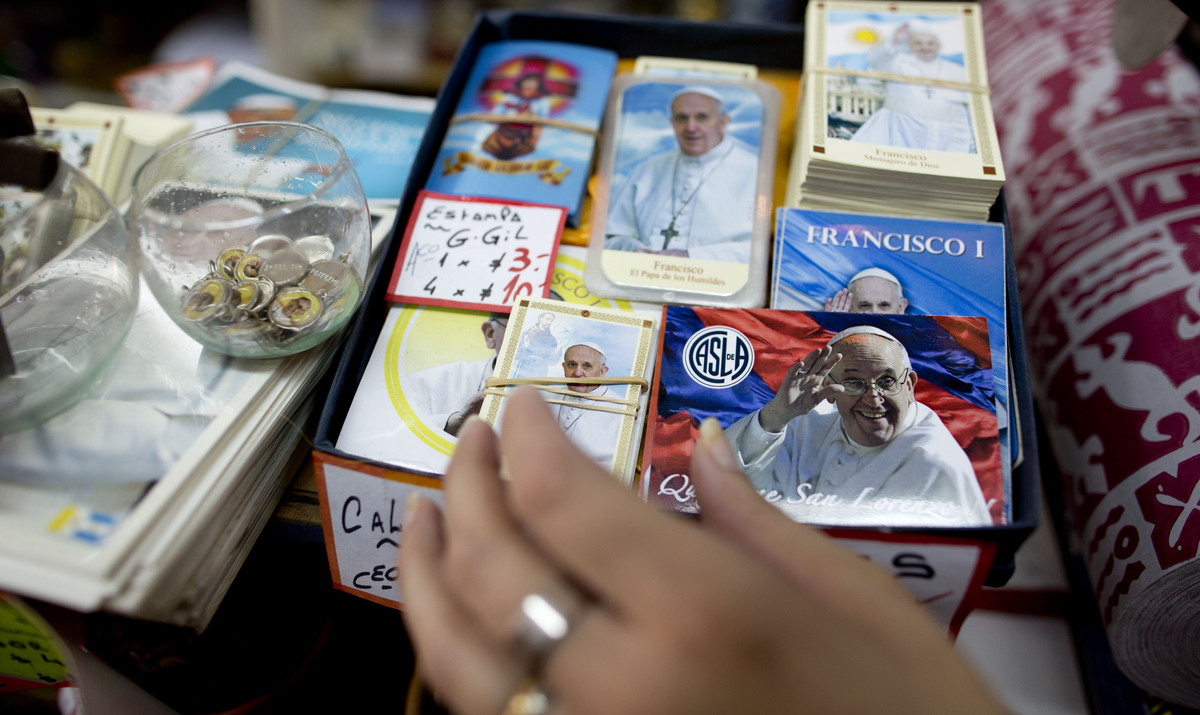 A box containing stamps, postcards and souvenir cards, adorned with the image of Pope Francis, on display at a shop in Buenos Aires, Argentina. In his first year as pope, Francis has endeared himself to the public.

Francis was elected with a mandate to clean house within the dysfunctional Vatican bureaucracy. His most sweeping reform thus far is the creation of a powerful economic department to ensure transparency and accountability at the Vatican bank, long plagued by scandal.

But Francis has also disappointed many Catholics by not openly apologizing to victims of clerical sex abuse whose revelations rocked the church over the past decade.

With regards to doctrine, when questioned by journalists whether he might introduce significant changes, Francis has said simply, I'm an obedient son of the church. O'Brien acknowledges that Francis often appears to be hedging his bets.

"My hope is that he can break through this ambiguity in his comments, because we want to see real change and real reform — not just talking the talk but actually walking the walk with Catholics, making some changes, changes that are long overdue," he says.

To the dismay of many traditionalists, the pope has opened up a debate inside the church on how to bring back into the fold divorced and remarried people, who under church law are banned from receiving communion. He has insisted it's a not a question of changing doctrine but of showing mercy. Wauck wonders how that would play out in practice for those Catholics who feel they've been left on what Francis calls the periphery of the Catholic Church.

"How do you interpret what the pope says when he says 'be merciful' and 'pastoral'?"

At the end of year one of his papacy, the pope's ratings are very high, but it's not a secret he's finding some resistance within the Holy See. Perhaps keeping everyone guessing on exactly where he intends to take the church is part of Francis' strategy.