Accessibility links
After 300 Years Of Marriage, Scotland Contemplates U.K. Divorce : Parallels For the first time, Scots will be able to vote on whether they want to remain part of the United Kingdom or strike out on their own. So far, polls suggest most favor unity over independence. 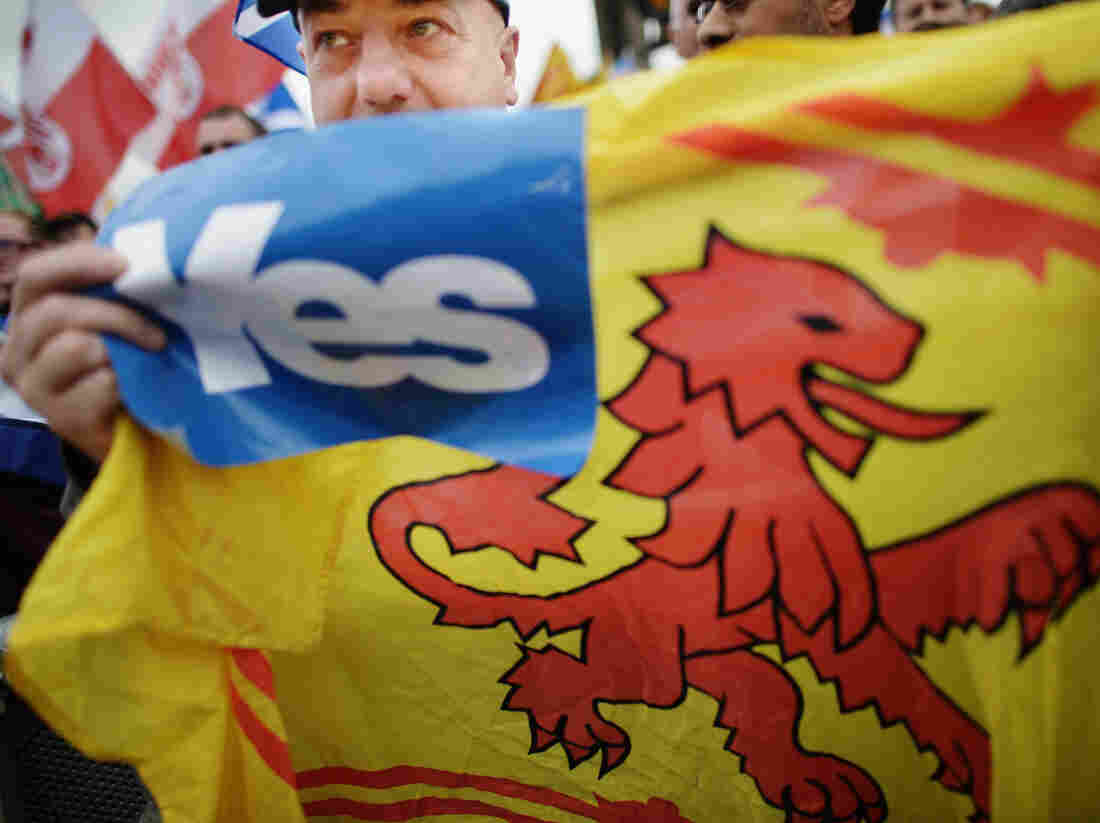 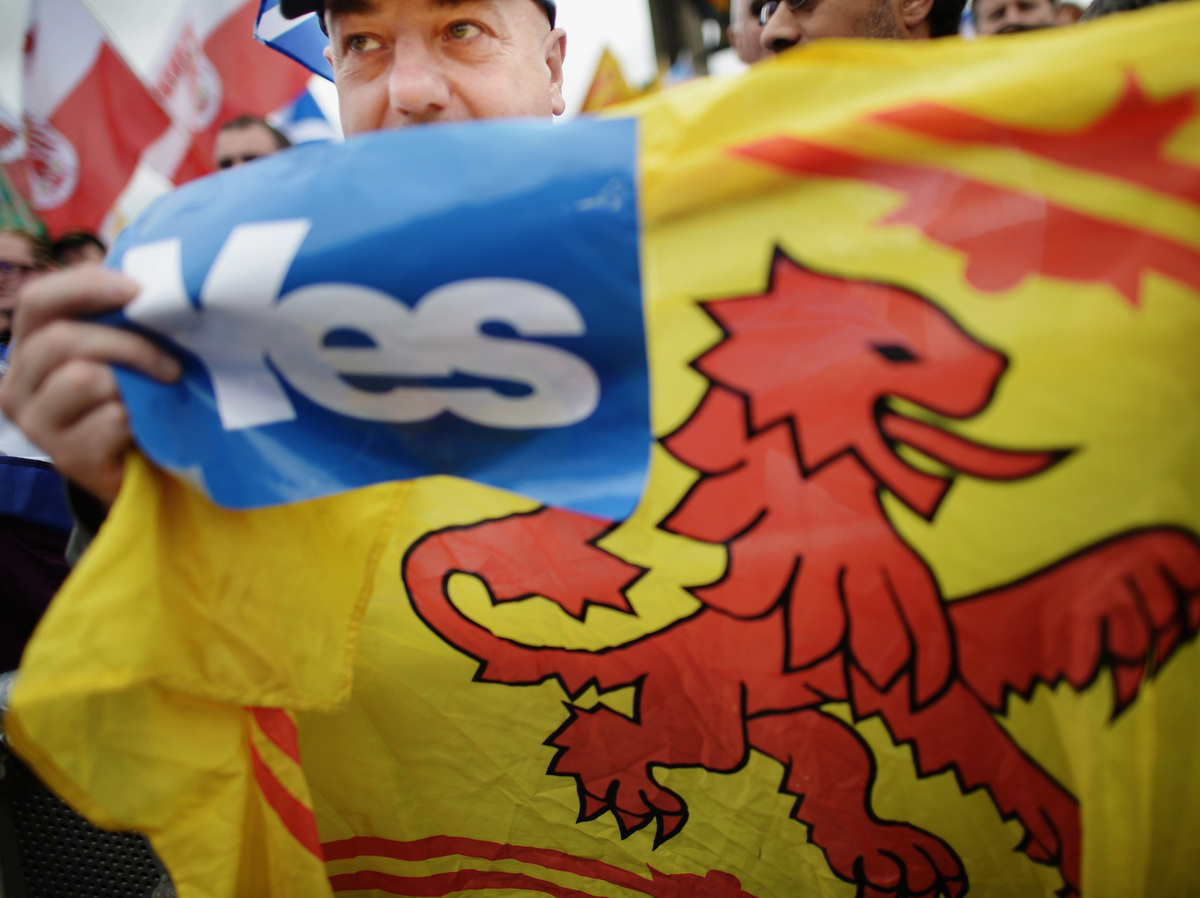 Pro-independence campaigners attend a rally In Edinburgh, Scotland, in September.

Scotland has been part of the United Kingdom for more than 300 years. This fall, that could change. In mid-September, a referendum on independence will determine whether Scotland breaks off from England, Northern Ireland and Wales to become a sovereign nation.

Scotland's largest city, Glasgow, is ground zero in this debate. The East End of this city is poor and run down, with some of the worst health figures in Europe. Men here are expected to live into only their mid-50s, some 30 years less than in wealthy areas.

"You can just look around and see. Everybody's in the same boat. We're all broke!" Connie Hendry says with a cackle. She's smoking a cigarette outside her mother-in-law's greasy spoon cafe. Customers are scarce. Forty years ago, Hendry says, the area was "packing. You couldn't have moved down here at one point. But now it's dead."

She works in a part of town called the Barras, an old market that sells low-cost items like knockoff DVDs and used clothing. For the hawkers and their occasional customers, the key question is whether an independent Scotland will improve their lives.

There is intense disagreement.

"Better with the devil you know!" cries Robert McKinnon from his stall where he sells socks.

His buddy Roger McKinnon couldn't disagree more, insisting, "London is sucking the life out of the rest of the United Kingdom!"

London is about 300 miles away, and for independence supporters, London is the villain in this drama. "Yes" voters see a conservative government that doesn't represent Scotland's more liberal population.

Officials in London have issued dire warnings that an independent Scotland would lose the pound, the BBC and membership in the European Union. Big business finds that scary.

Will Scotland Go Independent? A Primer On The Secession Vote

In a much tidier part of town, Stuart Patrick runs the Glasgow Chamber of Commerce. His group has not yet taken a formal position on the independence referendum, but Patrick says he gets lobbied every day.

"At least the existing framework is well-known," he says, sitting at a table in his office. "So in that respect, there is a degree of pressure on the proponent of the change."

While business has a huge influence on politics in America, Patrick explains that it's a little different here.

"The Scots are not necessarily people who are easily told how to vote," he says. "And if you come out too vigorously saying, 'If you know what's good for you, you'll do X or Y,' Scots have a tendency to say, 'Aye, right. Nah, I'm not listening.' "

Outside of a hotel downtown, a man in a kilt plays the bagpipes for a wedding. A short walk away, the National Piping Centre sells waterproof bagpipe cases. A few blocks in the other direction, shops make and sell custom kilts. 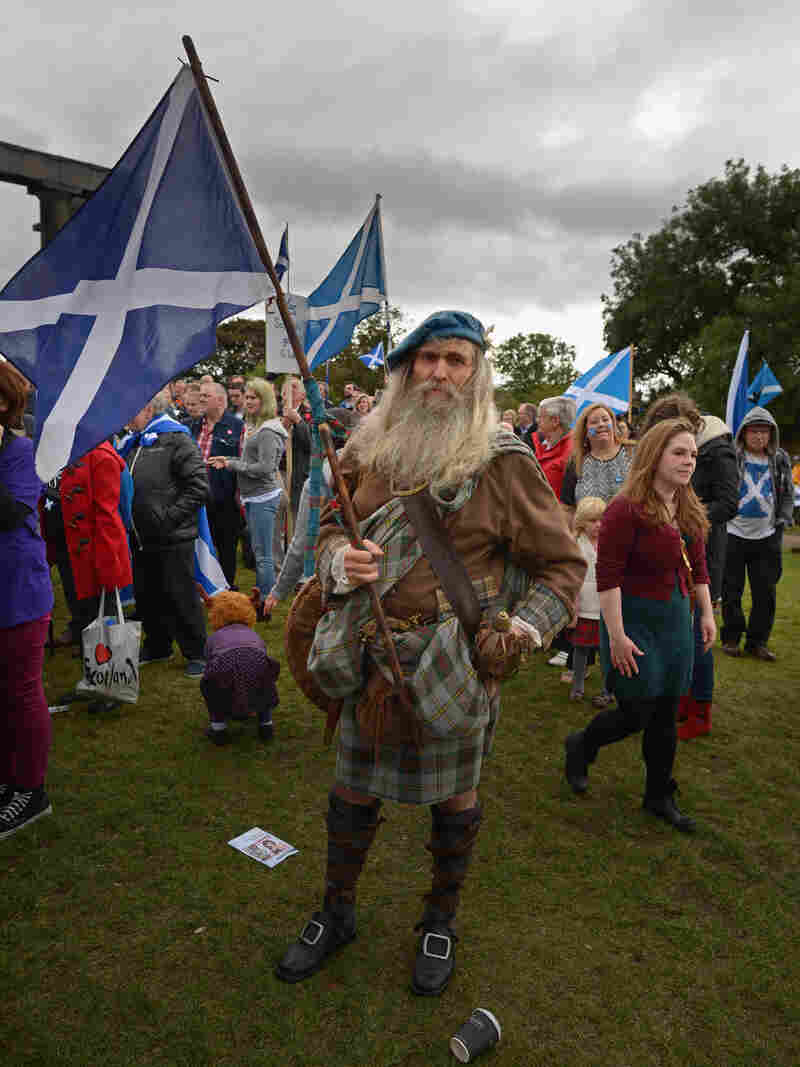 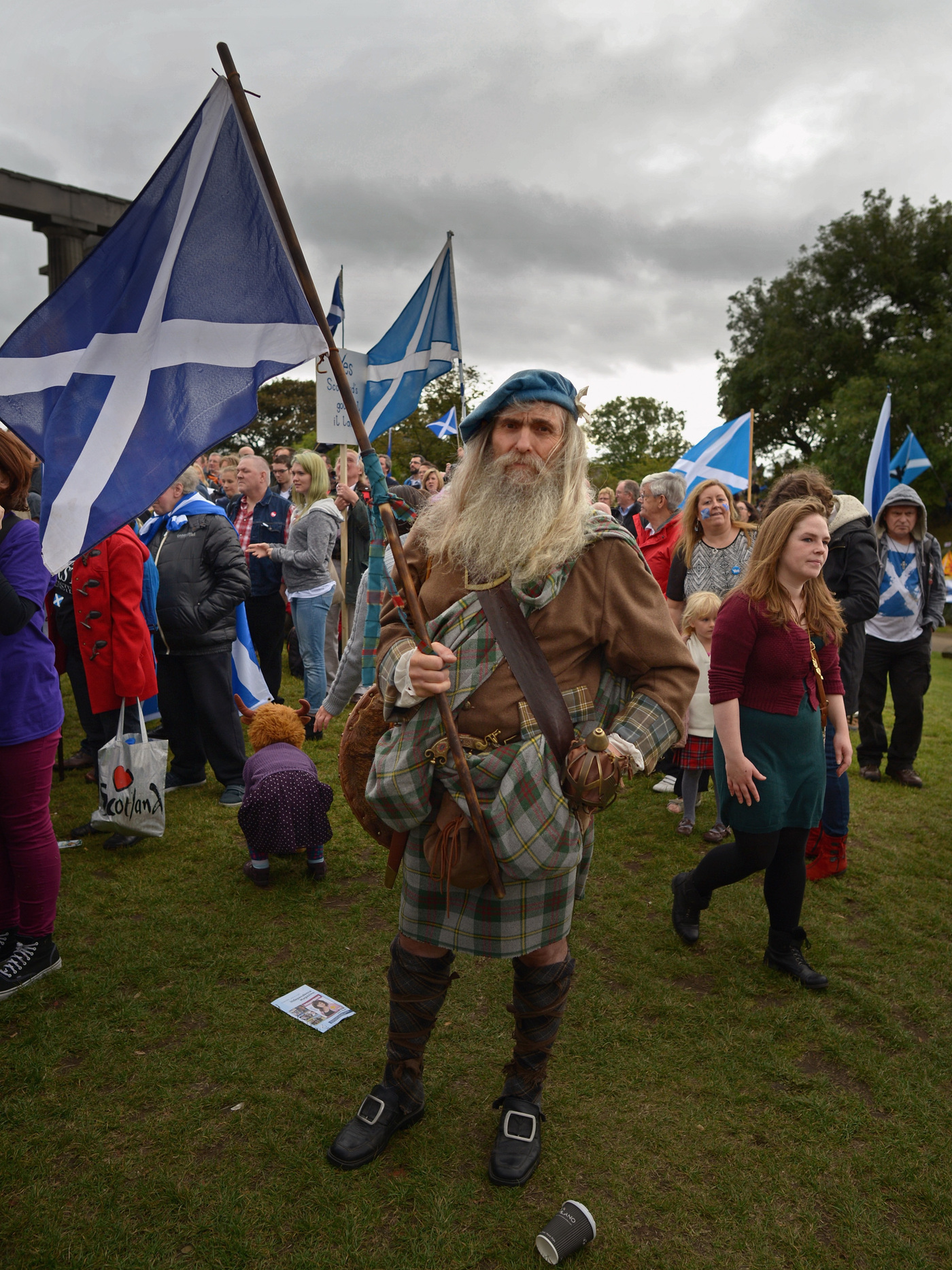 Pro-independence supporters, seen here at a September rally in Edinburgh, say many Scots still see the English as colonial empire-builders.

This is not ironic kitsch. The Scots take their heritage very seriously. In Glasgow, haggis is no joke. It's part of the hotel breakfast buffet.

The people of Scotland have a strong sense of national pride, history and identity. That sentiment informs many "yes" votes, and it's manifest at the Riverhill Coffee Bar, a sliver of a cafe with a vibrant blue facade where manager Kirstie Gilmore recently decided to do a sort of experiment with a Scottish sandwich cookie called an empire biscuit.

"We actually done empire biscuits with yes and no, like a ballot," she explains.

At first, the independence cookies outsold the unity ones. Then Gilmore started to wonder whether customers were just choosing the blue "yes" icing over the red "no" color.

"So we had to kind of mix it up with the second batch, so we did some red yeses and blue nos."

Even after the switch, the yes cakes won. But the chef, Kenny Harkin, is in the no camp.

"I just think standing alone isn't necessarily the way forward," he says. "I think unity is what we need."

Two of the baristas would've bought the yes cookies, largely for nationalistic rather than economic reasons.

His co-worker Mikie Lee Dale describes the cultural difference in even starker terms, explaining that many Scots still see the English as colonial empire-builders, acting like "the masters who've conquered the world and who therefore own that world." 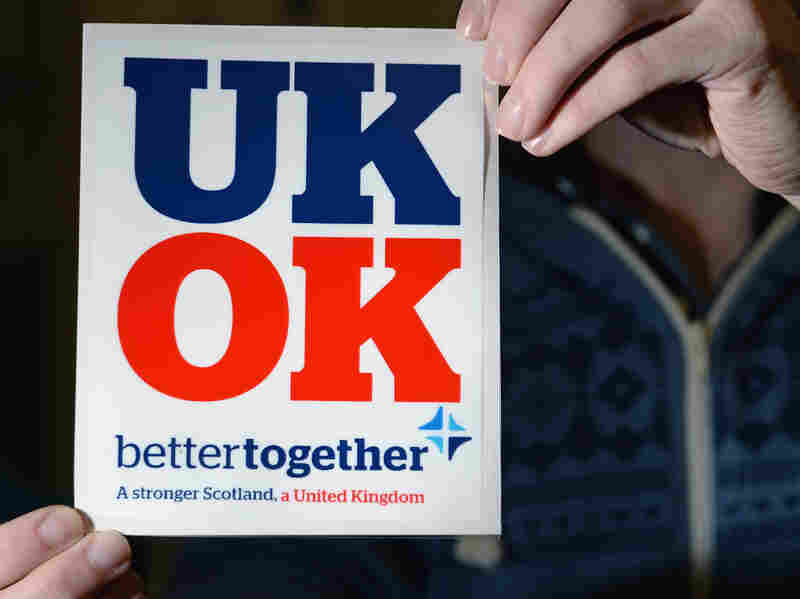 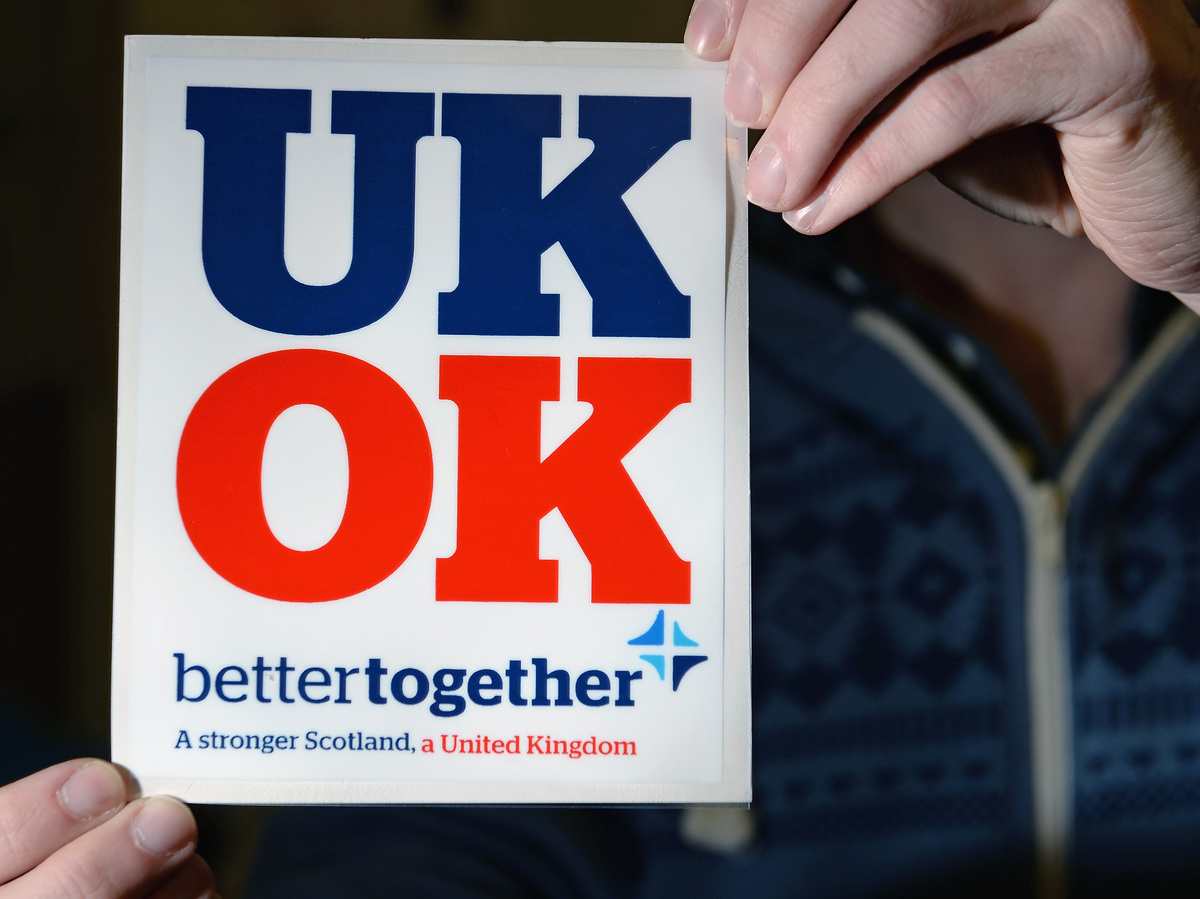 Polls show that most Scots favor the Better Together campaign's unity position.

The unity campaign is very aware of this perception. Communications director Rob Shorthouse is Scottish born and bred.

In Scotland, "we don't talk about — I'm a citizen of the United Kingdom, or I'm British," says Shorthouse. "No, we all identify ourselves as Scots. And that's common across yes voters and no voters."

The Better Together campaign staff are somewhat incongruously crammed into a beautiful old building that used to house Glasgow's Society of Lady Artists. There's an ornate ceiling and a fireplace as tall as a grown man. There are also flimsy cubicle walls, laptops and energy drinks.

Shorthouse says his campaign has the majority of Scottish people on its side.

"We're having this referendum not because of a large groundswell of public demonstrations and opinion forcing this on the government," he says. "The government [has] decided that this is what they want, because it's a longstanding policy of theirs."

He means Scotland's government. The Scottish National Party unexpectedly won the elections here in 2011. That opened the door for this vote, fulfilling a centuries-old dream of Scottish nationalists.

"Scotland has never voted on whether or not it wishes to be part of the United Kingdom," says Blair Jenkins, chief executive of the Yes Scotland campaign for independence. "There's no doubt as a healthy democratic process, just the opportunity of voting on this is huge."

Jenkins accuses his opponents of a roadblock strategy, calling Better Together "Project Fear."

"I think the strategy of the people who want a 'no' vote is to say, however attractive this road is, you can't go down that road because here are all the obstacles," Jenkins says, referring to threats to take away the pound, EU membership and more. "And I think the people resent the notion that there seems to be an attempt to force them to vote in a particular way.

If that resentment exists, it doesn't seem to be reflected in the polls. The latest survey shows support for unity well above 50 percent. Support for independence is in the low 30s, with around 10 percent undecided.

Mark Shephard is a political scientist at the University of Strathclyde in Glasgow. He has studied other independence referendums around the world and says, "In the majority of cases, as you approach the referendum date, people tend to gravitate to the status quo — the 'better the devil you know' kind of position."

So it's an uphill climb for the yes team. But Shephard says even if they lose, and Scotland remains in the U.K., this debate may dramatically reshape the dynamic within the United Kingdom. That suggests September's vote will have major repercussions for Scotland, no matter the outcome.