Accessibility links
For Flight 370 Families, Every Day Is 'Torment' : Parallels It's been an excruciating wait for families of passengers on the missing Malaysian airliner. They wait for word in a Beijing hotel and have little confidence in Malaysian authorities. 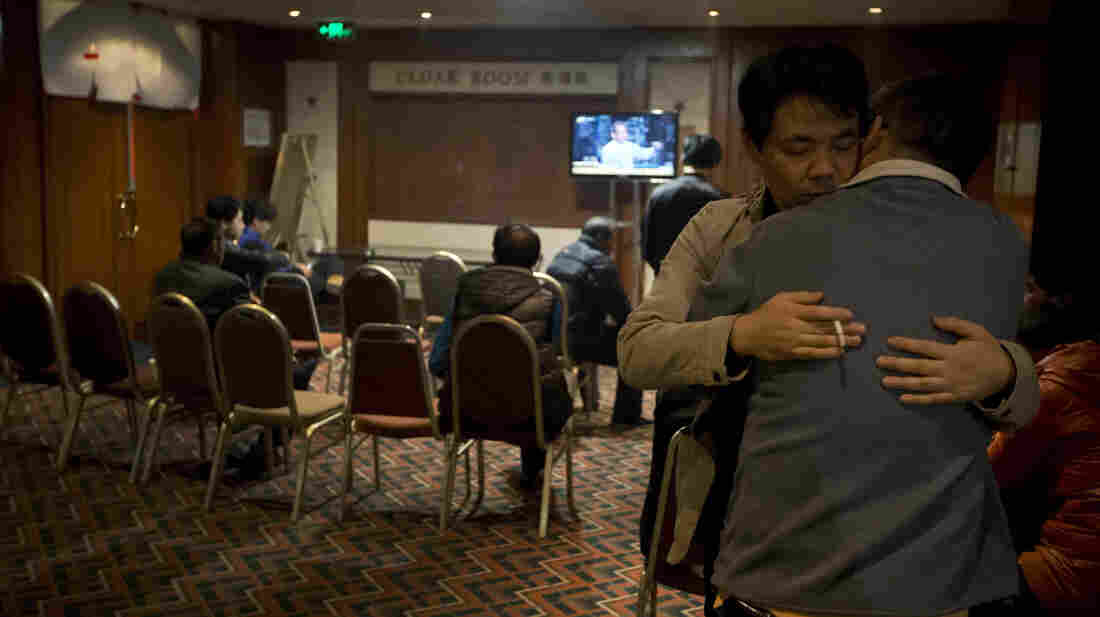 Relatives of Chinese passengers aboard the missing Malaysia Airlines flight comfort each other as they wait for a news briefing by airline officials at a hotel ballroom in Beijing on Thursday. Andy Wong/AP hide caption 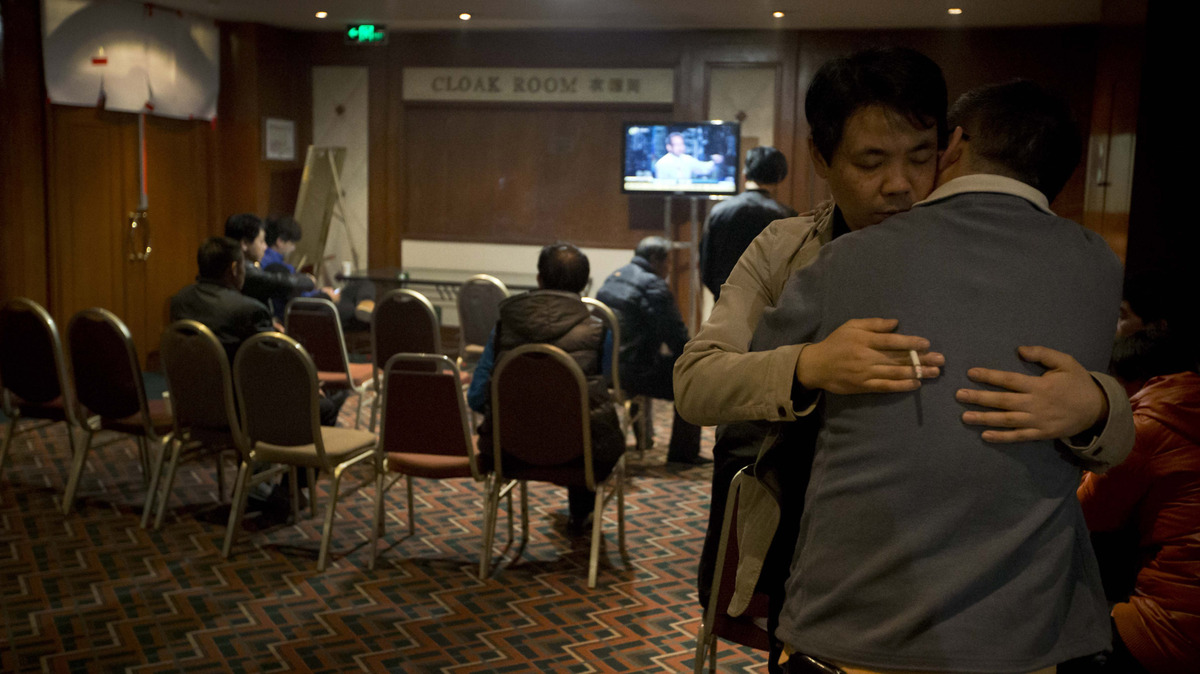 Relatives of Chinese passengers aboard the missing Malaysia Airlines flight comfort each other as they wait for a news briefing by airline officials at a hotel ballroom in Beijing on Thursday.

Family members of the passengers aboard Malaysia Airlines Flight 370 have grown increasingly frustrated in the nearly two weeks since the flight disappeared. Despite the efforts of airline and government officials, many relatives are angry about the lack of information. Some have even threatened to hunger strike in protest against the lack of information.

For many family members gathered at a Beijing hotel, the glare of media attention can be harsh. One minute, they are swatting away intrusive reporters who stick cameras and microphones in their tear-streaked faces. The next minute, when they want to vent their frustrations to the press, they have to battle hotel security guards who sometimes separate them from the journalists.

One relative, who gave only his family name, Gao, says Malaysian authorities' releasing information one day only to retract it the next is intolerable.

"We are extremely anxious about our relatives," he says. "The authorities are passing the buck, stalling and obstructing us. Right now, we have no confidence in the Malaysian government, so we're trying to get our friends in the media to help us put pressure on them."

Gao says he feels that he and the search teams are racing against the clock to find the plane — and the truth.

"We call on the Chinese government and national leaders to give us their full support," he says. "Every day of this torment that goes by feels like a year to us."

Help for the families has been slow to build up. After complaints, Malaysia Airlines has sent management teams to Beijing to keep the families informed.

Dozens of paramedics and ambulances are on hand at the hotel in case relatives collapse from the stress. Help from civic groups remains scarce. For spiritual support, the airline has brought in blue-and-white-suited volunteers from Tzu Chi, or Compassionate Relief, a charity founded by Taiwanese Buddhists. 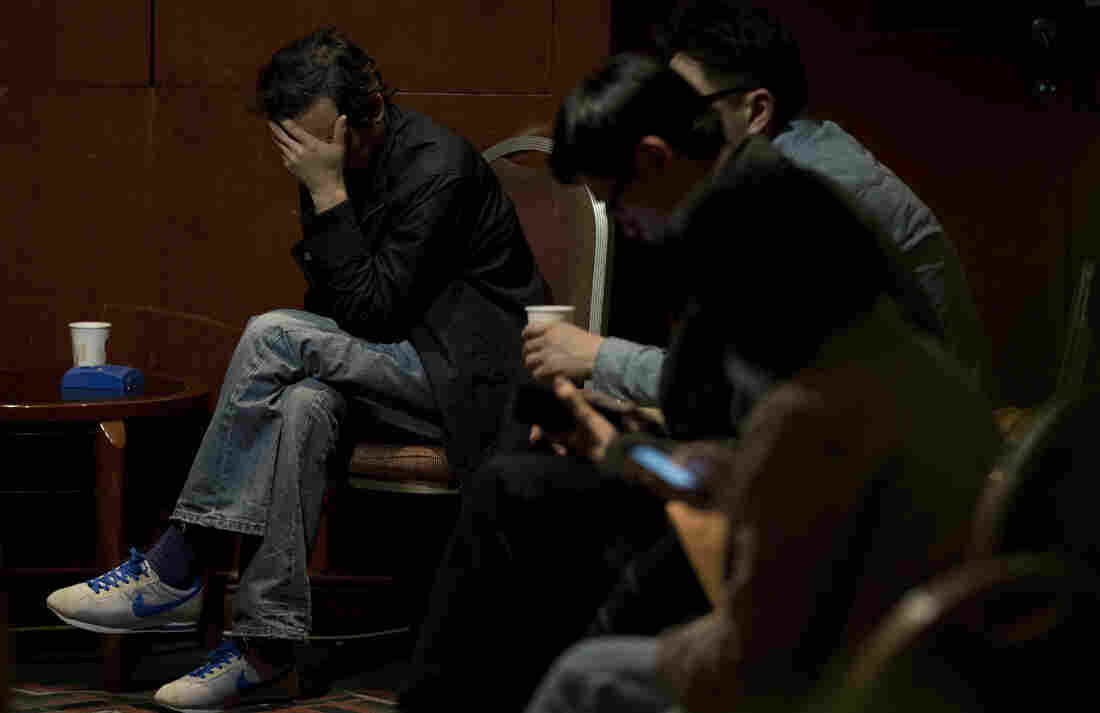 Relatives of the Chinese passengers aboard the missing Malaysia Airlines Flight 370 wait for the latest news of the plane at a Beijing hotel on Thursday. Andy Wong/AP hide caption 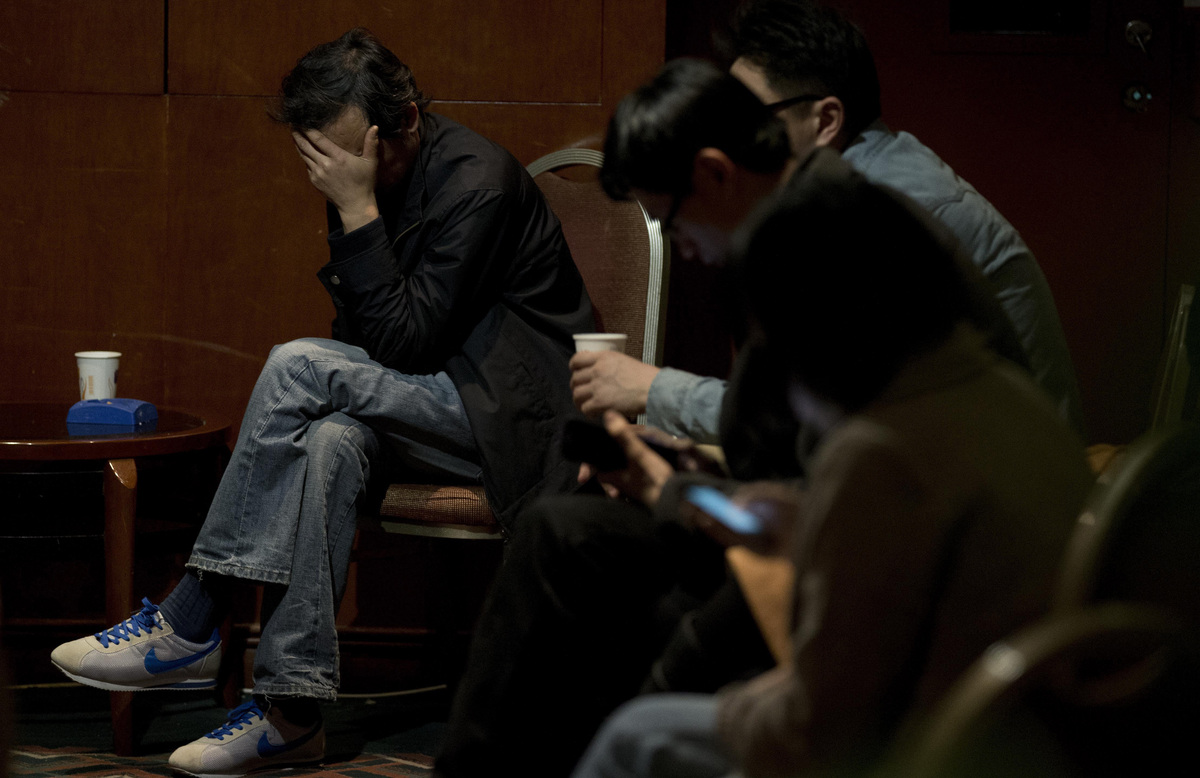 Relatives of the Chinese passengers aboard the missing Malaysia Airlines Flight 370 wait for the latest news of the plane at a Beijing hotel on Thursday.

China's government has traditionally been suspicious of overseas religious groups, but it tolerates Tzu Chi, whose members are careful to avoid politics and proselytizing. Team member Tseng Yun-chi says they often help relatives with just a pat on the shoulder, a hot cup of tea or a sympathetic ear.

"They say, 'I've lost my family member, how can I go on living?' We tell them, 'There's no bad news yet and that means that there may still be good news. We should be positive and wait for that good news,' " Tseng says.

China's government has been pressuring Malaysia to be more transparent. Beijing is struggling to keep up with the growth of Chinese travel overseas. Around 100 million Chinese nationals now venture abroad every year.

At a briefing this month, Foreign Minister Wang Yi told reporters China will try harder to help those who run into trouble in foreign lands.

"We would like to shield wind and rain for every one of our compatriots who travel abroad with their dreams and become the firm support you can count on," he said.

Earlier suggestions that Flight 370 could have been hijacked gave some family members a glimmer of hope. But that seemed to fade as the search's focus shifted to the vast expanses of the southern Indian Ocean.