Accessibility links
Short On Dollars, Venezuela Tries To Halt Black-Market Trading : Parallels Venezuela placed controls on its currency as it rapidly lost its value. But that only made matters worse. Now it is rolling out a new system in hopes of stabilizing its weak currency. 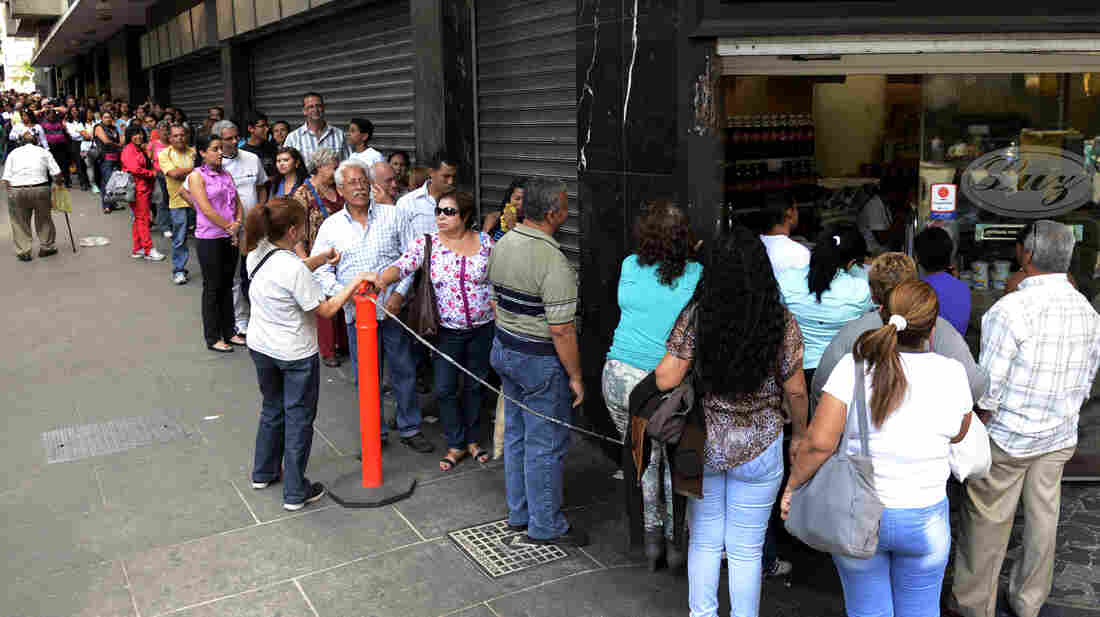 Venezuelans line up to buy goods at a store in Caracas on March 10. Protesters have been taking to the streets for weeks over the country's troubled economy and other issues. The government introduced a new foreign currency exchange system on Monday, seeking to stabilize the bolivar, which has lost much of its value against the U.S. dollar. Leo Ramirez/AFP/Getty Images hide caption 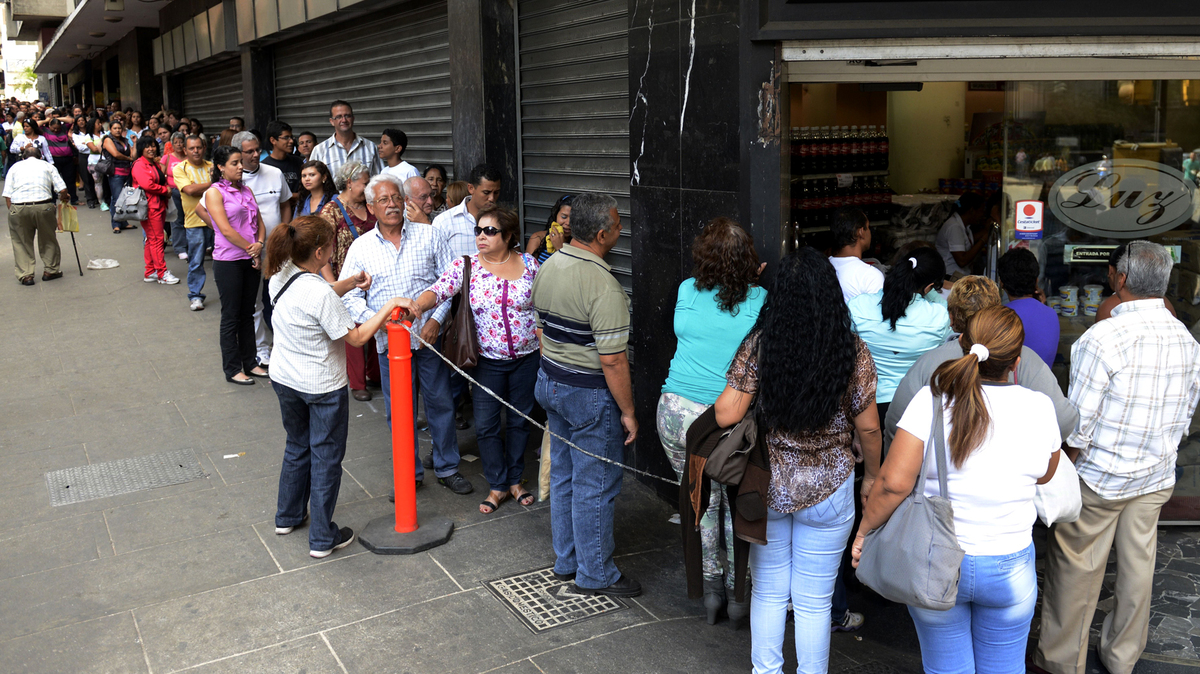 Venezuelans line up to buy goods at a store in Caracas on March 10. Protesters have been taking to the streets for weeks over the country's troubled economy and other issues. The government introduced a new foreign currency exchange system on Monday, seeking to stabilize the bolivar, which has lost much of its value against the U.S. dollar.

The Venezuelan capital, Caracas, can be one of the most expensive cities in the world — or one of the cheapest. It all depends on how you exchange your dollars.

At a fast food restaurant in the city recently, a pretty tasty plate of chicken and rice cost me 160 bolivars. At the official exchange rate set by the government, that works out to a little more than $25; at the black market rate, it's just $2.

Needless to say, most anyone who can change money on the black market in Venezuela does so.

As one person told me: "For people like me [who are] paid in dollars ... it is easier and better to change your dollars in the black market where the price is higher, and the ways are much easier than the official ways."

He didn't want his name used because changing money on the black market can come with a six-year jail sentence.

In most countries, you change your dollars for the local currency at a price the market deems fair. In Venezuela, the government fixed the price at 6.3 bolivars to the dollar. But the black market said that price is ridiculously low. Recently, 1 U.S. dollar in Venezuela could get you up to 90 bolivars.

The rate has come down since then. Reuters reports that the black market rate was about 58 bolivars to the dollar on Monday, the same day that the government introduced a new exchange system.

The exchange rate is just one example of the economic crisis that has prompted weeks of unrest in Venezuela. Many basic goods have been in short supply, and inflation has been running at more than 50 percent under President Nicolas Maduro, who champions a socialist economy, as did his predecessor, the late Hugo Chavez.

How Do You Get Dollars?

At a Caracas cafe, a student named Andrea told me that crime, the lack of opportunities, and political tension are the reasons she wants to leave Venezuela and study abroad. She's headed to the U.S. if she can get dollars from the bank at the official rate to pay for her tuition.

Venezualan Flights Are Dirt Cheap ... If You Can Get A Ticket

But the Venezuelan government and the banks don't want to part with the dollars they have, so it is incredibly hard for people like Andrea to get them. And buying dollars on the black market would be exorbitantly expensive.

She pulled out a 34-page document. First, she said, you have to apply online. Then you need to get all these documents together, get them certified and in some cases translated, and make three copies to present to the bank.

Among the papers she has to provide is her class schedule, her mother's birth certificate, her school diploma, a letter explaining her reason for leaving the country, and on and on. It takes weeks to get the information together, and there is a limit to how many dollars she can apply for.

One document she needs is a copy of her airplane ticket, which she has purchased. But she says that unless she gets the dollars, she won't be able to afford the trip. Many people don't get the dollars they've asked for, and aren't told until the very last minute.

All Venezuelans doing business with the outside world want these cheap dollars.

Let's say you're a Venezuelan businessman who needs to import goods from Miami. You need dollars to pay for the shipment, but the government won't give you any. What do you do?

I went to a dark shop that sells clothing off a main shopping street in the capital. The owner here is also a money changer. In fact, most businessmen you meet in Caracas are constantly trying to buy dollars.

One businessman told me he had never been able to get money at the official rate from the banks despite numerous applications — which means the only way to get dollars is to trade them in.

But in the illegal, secretive black-market system, how do you determine the price of a dollar? The owner at the store whips out his computer and looks at dolartoday.com. This particular website has had many names and incarnations, but it's the one people go to now to get the black-market rate for dollars in Venezuela.

And this is where it gets really weird: Venezuela's economy — what people all over the country are buying and selling pegged to the dollar — is determined though a murky website run out of Miami.

Venezuelan economist Robert Balsa, who teaches at the Catholic University in Caracas, says the website makes its calculation by looking at the dollar reserves the Venezuelan government has and the rate being used by traders in the Colombian border city of Cucuta.

He says what's so shocking is that this calculation should serve as the basis for so many transactions. And, he adds, it's all because the government's policy means that Venezuelans can't get the dollars they need at the official rate.

As Venezuela's government launched the new official currency exchange system on Monday, the rate was fluctuating between 50 and 55 bolivars to the dollar. But few people were buying at that rate, Reuters reported.

Still, the black market is taking notice — that's well below the recent high of 90 bolivars to the dollar.