Accessibility links
Latvia's Ex-President: 'We Have To Worry' About Russia : Parallels Latvia joined NATO and the European Union a decade ago. Its former president sees these strong ties to the West as vital to maintaining its security and independence. 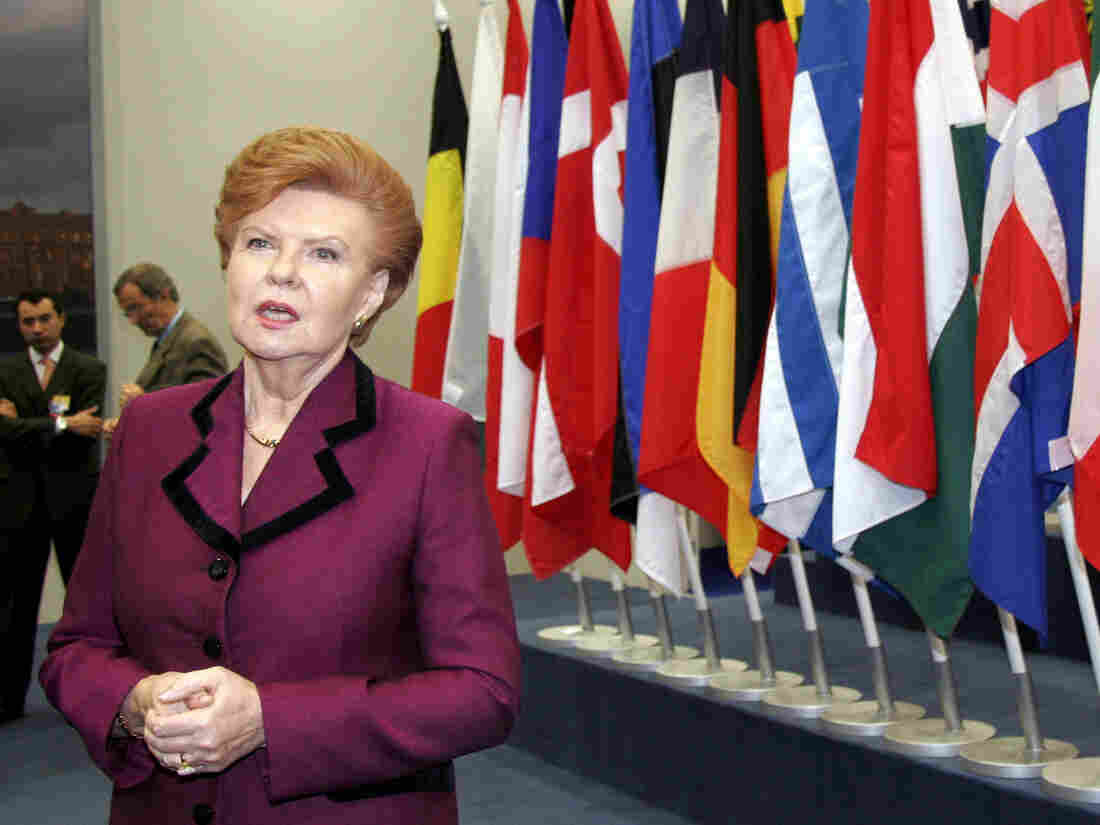 Latvia's former president, Vaira Vike-Freiberga, is shown here at a NATO summit in 2006. During her presidency, Latvia joined both NATO and the European Union in 2004. ROMAN KOKSAROV/AP hide caption 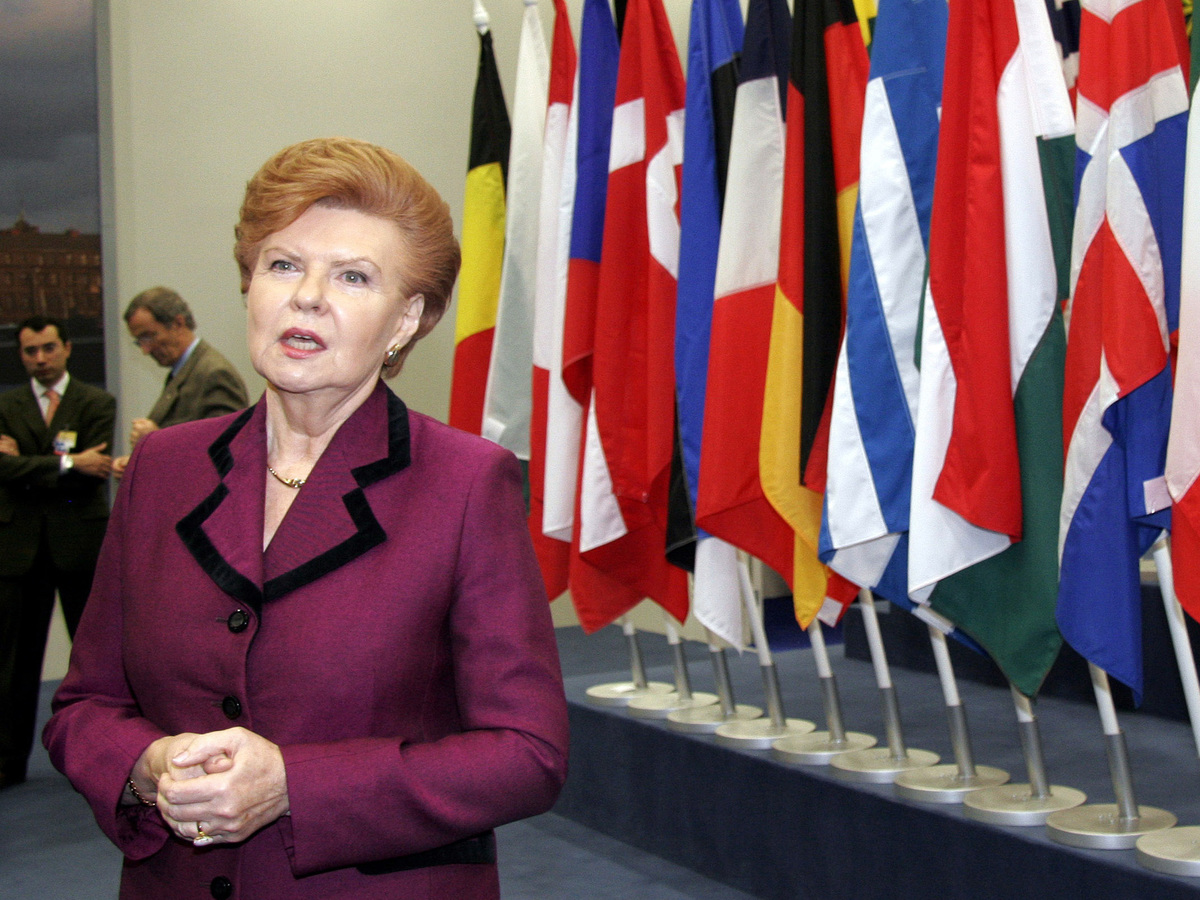 Latvia's former president, Vaira Vike-Freiberga, is shown here at a NATO summit in 2006. During her presidency, Latvia joined both NATO and the European Union in 2004.

What Does The Ukraine Crisis Mean For Moldova?

The tiny Baltic state was itself taken over by the Soviet Union in 1940 and did not regain its independence until the Soviet breakup in 1991. Latvia has a population of just 2 million, and roughly a quarter of those are ethnic Russians.

Given this history, Latvia was eager to align itself with the West. In 2004, under then-president Vaira Vike-Freiberga, Latvia joined both the European Union and NATO and is counting on those allies for protection.

The maps at the bottom of this page show the dramatic shift that's taken place in Europe over the past two decades.

On NPR's Morning Edition, Vike-Freiberga said Tuesday that despite having powerful friends, Latvia needs to continue to strengthen its own national security as well.

We have been working very hard, certainly during my presidency, to convince them that if they have decided to live in Latvia they might as well do so with full political participation which comes with citizenship and the right to vote ... But there are the diehards who think that the renewed independence of Latvia is only a passing thing and that, indeed, the fate of Crimea is what they would hope for (for Latvia) because they came here as conquerors under the propaganda that they are liberating the country from fascism — even in 1940 when (Latvia) was independent and (the Soviet Union) invaded it.

I think such ideas should have disappeared with the 1917 revolution when Latvian riflemen helped to overthrow the tsarist regime. The whole point was that we were following (U.S. President) Woodrow Wilson's principles of the right of nations to determine their own fate and that includes those who have the misfortune of living nearby whatever Russian political system is in effect at the time.

We have no predestined wish to be subject to Moscow's dictates. We have been submitted to it by the force of arms. In international law, there is no such concept that has been accepted that one nation can determine how another should be governed.

There are principles — for instance, in the European Union — to which we have all voluntarily subscribed. But it has not been a case of (the EU) enlarging its sphere of influence to include Latvia as a member. It is a completely different thing.

On a fundamental difference between Russia and the European Union

They have the vertical of power in Russia and it doesn't quite work that way in the EU. We'd rather follow the principles of subsidiary and leave quite a bit of decision-making power to each sovereign nation. The vertical of power means that you have one man and his cronies controlling basically all the levers of power and the finance and subsidiary means you try and have as much decision-making delegated at either the municipal, the regional or national levels rather than at the supranational levels such as the EU.

On the likely impact of sanctions against Russia

It remains to be seen how hard any measures taken by the West will bite him. And that is also difficult to predict because we live in such a globalized world where the interconnections in energy supplies and in the flow of financial markets is not as predictable as one would like to see it. If the sanctions should happen to bite sufficiently, something might happen. But otherwise, having once seized (Crimea) it's like a vulture having seized something in its claws. I doubt that, voluntarily, (Russia) would give it up.

On threats to Latvia's security

We have to worry every minute of every day. We have to be ready in every possible way. This is why when we were first given the membership action plan for NATO, we took it very seriously. We're glad to have it... We, at the moment, are not fulfilling our 2 percent of (the proportion of GDP that NATO requires to be spent on defense). I have spoken out in public and said this is wrong. Of course, we had a very serious (economic) crisis in 2008 and 2009... so there was this difficult period when our investment in defense had to decrease but now it has to increase again because, yes, we have to be fully participating partners in our common security, which is a security that NATO offers. Putin feels the EU and NATO are encroaching on Russia. This map shows the countries in central and eastern Europe that have joined the EU and-or NATO since the Soviet collapse.